What Is Inclusion Bodies?

The cell is the smallest, fundamental unit of all living organism. Every living organism is composed of one or more cells, and therefore it is referred to as the building blocks of life. There are different types of cells- blood cells, nerve cell, muscle cells and are involved with their specific functions. The main features of these cells are they provide shape and carry out specialised functions.

There are many cell organelles, which are membrane-bounded and perform a specialised function to keep the cell alive and active. Among which, few cell inclusions serve as the reserve materials in prokaryotic cell and are present within the cytoplasm of the cell.

Let’s learn more about the Inclusion bodies along with the general features and their classifications.

What are Inclusion Bodies?

The inclusion bodies are tiny particles found freely suspended and floating within the cytoplasmic matrix. Therefore, also referred to as cytoplasmic inclusions. These cell inclusions are formed with decreasing pH and from the pool of soluble fusion proteins within the cell. They are the elementary bodies, formed during infectious diseases or within the virus-infected cells such as rabies, herpes, measles, etc. 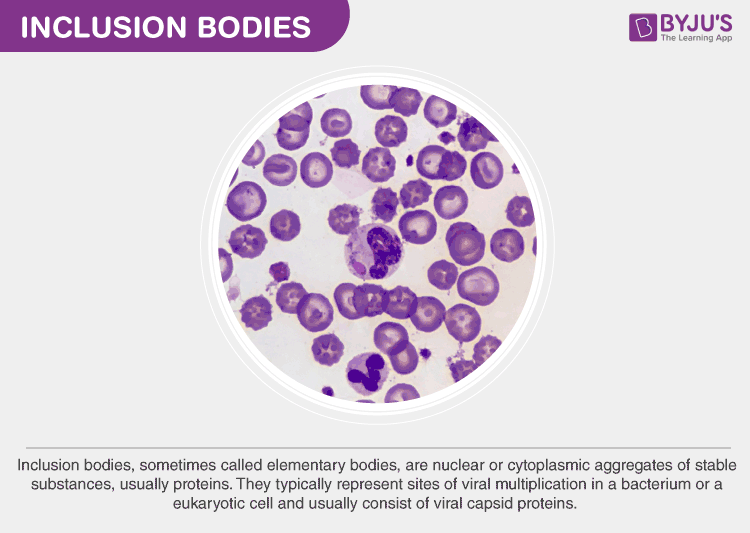 Inclusion bodies are abnormal structures with distinct size and shape and usually observed in nerve, epithelial, or endothelial cells. They have a characteristic staining property and are typically composed of proteins.

Inclusion bodies are non-living chemical compounds and by-products of cellular metabolism. They are found both in prokaryotes and eukaryotes. There are a wide variety of inclusion bodies in different types of cells. In prokaryotic cells, they are mainly formed to store reserve materials. In animal cells, they store fats and sugars that are ready for cellular respiration and in plant cells, they store granules of materials like glycogen, starch, etc.

Following are some of the examples of viral inclusion bodies:

What are the inclusion bodies?

Inclusion bodies are tiny particles freely suspended in the cytoplasmic matrix. They are also referred to as cytoplasmic inclusions.

What is the function of inclusion bodies?

The inclusion bodies serve as storage vessels. Glycogen is stored as a reserve of carbohydrates and energy.

Can ribosomes be considered as inclusion bodies?

Ribosomes are macromolecules made up of RNA and proteins. They are granular, non-membranous structures that play a role in protein formation in the cells. Hence, they can be considered as an intermediate between inclusion bodies and cell organelles.

How are the inclusion bodies formed?

These are formed with increasing pH and pool of soluble fusion proteins within the cell. They are formed during infectious diseases or within the virus-infected cells such as rabies, herpes, etc.