“Vertebrates are animals that possess a vertebral column and/or notochord at any point in their lives.”

One of the ways life is classified is through the presence or absence of the vertebrate. Vertebrates and invertebrates evolved from a common ancestor that was speculated to have lived around 600 million years ago.

Evidence of true vertebrates began to appear 525 million years ago and ever since then, vertebrates have branched off into a long lineage that includes armoured fish and giant sauropods to woolly mammoths and modern man.

A vertebrate is an animal that has all of the following characteristic features at some point in its life:

Vertebrates are classified into 7 classes based on their anatomical and physiological features. They are:

This class of organisms have the ability to regulate their body temperature irrespective of the surrounding ambient temperature. Therefore, mammals are called endothermic animals and it includes humans and platypuses.

Reptiles include tetrapods such as snakes, crocodiles, tuataras and turtles. The characteristic feature of reptiles is that they are ectothermic in nature. Snakes are still considered tetrapods though they have no visible limbs. This is due to the fact that snakes evolved from ancestors that had limbs.

Amphibians include ectothermic tetrapods such as frogs toads and salamanders. The distinguishing feature that separates amphibians from reptiles is their breeding behaviour. Most amphibians need a body of water to breed as their eggs are shell-less. Furthermore, they undergo metamorphosis where the young ones transform from fully-aquatic larval form (with gills and fins) to terrestrial adult form.

This class of fishes is characterized by their skeleton which is composed primarily of bone rather than cartilage (such as sharks). Class Osteichthyes is also the largest class of vertebrates today.

As the name suggests, this class is characterized by the cartilaginous skeleton. Members include sharks, rays, skates and sawfish. Some sharks such as the massive Greenland shark can live for several centuries. A specimen that was tagged in 2016 was found to be at least 273 years old.

These are very primitive fishes that have not changed much from fossil records for millions of years. They have a jawless, circular mouth with rows of small sharp which aid in holding and feeding on other fishes. Most members of this class are parasites and scavengers.

Learn more about vertebrates and their characteristics by registering at BYJU’S.

1. Which animals are vertebrates?

Animals that possess a backbone is classified as a vertebrate. There are a large number of vertebrates currently existing on earth and they are classified into 7 classes based on their physiological and anatomical features.

2. What does it mean to be a vertebrate?

Vertebrates and invertebrates are speculated to have evolved from a common ancestor many million years ago. But today, from an evolutionary perspective, vertebrates are considered to be the most apex forms of life on earth. Their complex anatomy and physiology provide a significant advantage over invertebrates in the natural world.

3. What are the 7 classes of vertebrates?

Vertebrates have been classified based on their anatomical and physiological characteristics into 7 groups. They are as follows:

Reptiles and birds primarily lay amniotic eggs. Mammals also lay amniotic eggs though they are specialized for internal development. However, prehistoric mammals laid eggs and some modern-day mammals still do.

5. When did vertebrates appear? 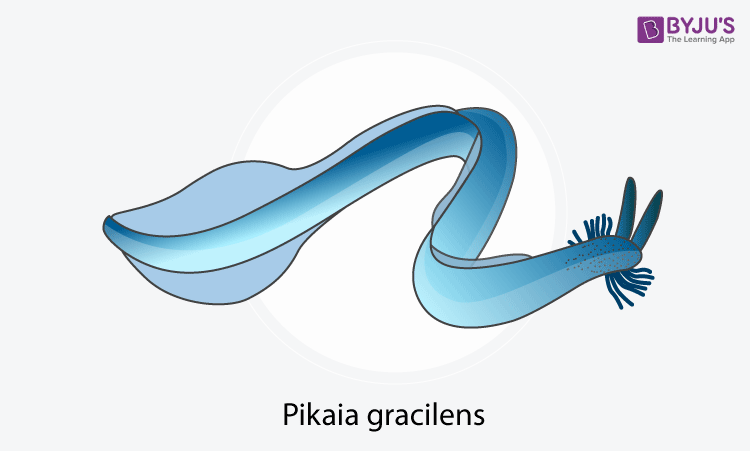 An artistic interpretation of Pikaia gracilens based on fossil evidence

Test your Knowledge on Vertebrates
Q5