Reaction of acetylation of salicylic acid

Mechanism of Acetylation of Salicylic Acid

The acetylation of salicylic acid occurs in an acidic medium. Here, the acidic medium (usually concentrated sulphuric acid) aids in the detachment of the acetate ion from the acetic anhydride. This acetate ion goes on to associate with the proton liberated by the phenolic OH group (hydroxy group) of the salicylic acid molecule, resulting in the formation of acetic acid (CH3COOH). The mechanism of the acetylation reaction undergone by salicylic acid to afford aspirin and acetic acid as the product is illustrated below. 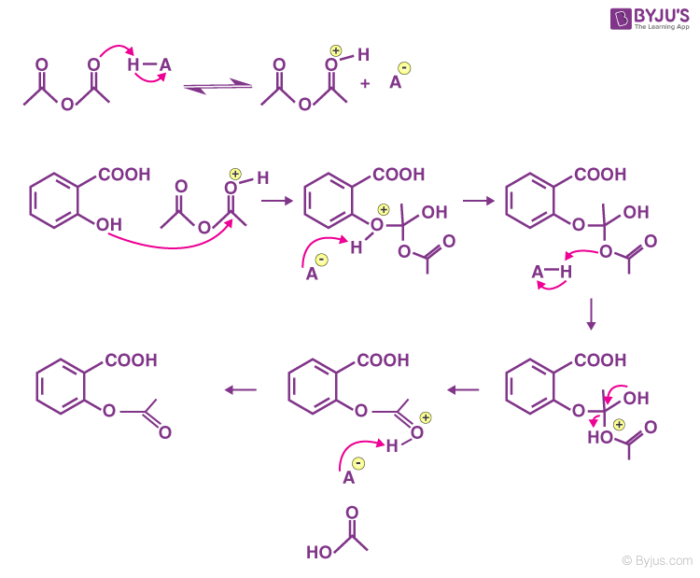 First, one oxygen atom of the acetic anhydride is protonated by the acid. The resulting positive charge is relayed to the adjacent carbonyl carbon, which binds itself to the phenolic hydroxy group. This intermediate is now deprotonated and one acetic acid molecule detaches itself from it. Thus, the required products (aspirin and acetic acid) are formed.

Other Notable Examples of Acetylation Reactions

To learn more about acetylation and other important concepts in organic chemistry such as the Friedel-Crafts alkylation reaction, register with BYJU’S and download the mobile application on your smartphone.

What is meant by the term acetylation?

What are some examples of acetylation reactions?

Some examples of acetylation reactions are listed below.

What is acetylation of wood?

What is histone acetylation?

Test your Knowledge on Acetylation
Q5