Deforestation can be defined as the large-scale removal of trees from forests (or other lands) for the facilitation of human activities. It is a serious environmental concern since it can result in the loss of biodiversity, damage to natural habitats, disturbances in the water cycle, and soil erosion. Deforestation is also a contributor to climate change and global warming. 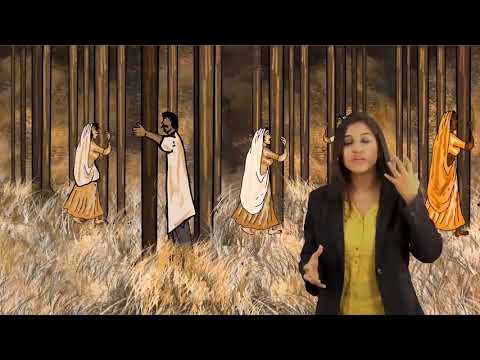 Why are Forests Important?

The Data behind Deforestation

What are the Human Activities that Cause Deforestation?

The primary anthropogenic activities (human activities) that contribute to deforestation include:

According to the secretariat of the UNFCCC (United Nations Framework Convention on Climate Change), agriculture is the root cause of 80% of deforestation. Logging accounts for another 14% and the cutting of trees for use as wood fuel account for 5%. A pie-chart detailing the driving cause of the deforestation of tropical forests between the years 2000 and 2005 is provided below. 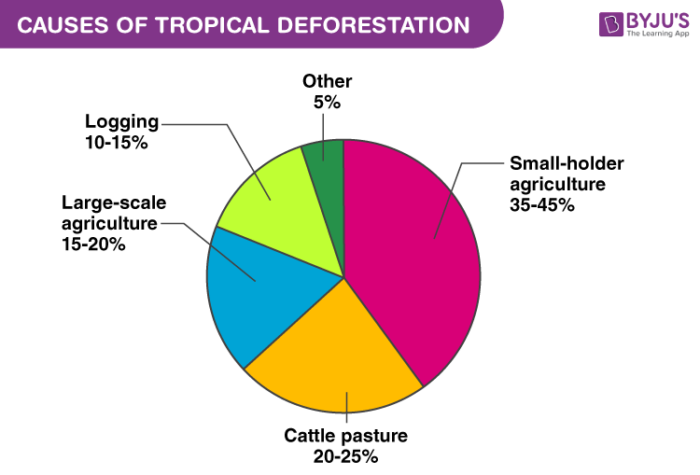 Slash-and-burn agriculture is one of the most destructive forms of agriculture that results in large-scale deforestation. It involves the burning of a large area of forest land and the subsequent plantation of crops in the same soil (which is now fertilized by the ashes of the burnt trees). Despite the practice being abandoned by several developed countries, it is still followed in some Southeast Asian countries.

What are the Secondary Factors that Contribute to Deforestation?

Illegal logging, which accounts for approximately 80% of all logging activities, involves the harvesting and sale of timber in violation of the law. Corrupt government officials may accept bribes from illegal loggers and offer access to protected forest areas in return. Therefore, corruption can be viewed as an indirect cause of deforestation.

Military conflicts among humans can also result in deforestation. For example, the U.S. military made extensive use of Agent Orange (a defoliant that causes the leaves of trees to wither and fall off) during the Vietnam War (1955 – 1975).

Can Deforestation Occur due to Natural Causes?

In some relatively rare cases, the deforestation of forest areas can be traced to natural causes. For example, volcanic eruptions can burn away the forest lands surrounding the volcano. Other examples of natural deforestation include:

It is important to note that natural factors have a very small stake in the overall deforestation of the Earth’s land surface (anthropogenic factors account for almost all of it).

How Does Deforestation Affect the Environment?

Forests serve as a carbon sink by absorbing atmospheric carbon dioxide during photosynthesis. Since carbon dioxide is a greenhouse gas, deforestation is a direct contributor to the greenhouse effect and (consequently) global warming.

Deforestation and the Water Cycle

Soil Erosion as a Consequence of Deforestation

Trees tend to bind their roots to the soil bedrock, thereby reinforcing the soil. Additionally, the plant litter generated by trees offers protection to the surface of the soil. In the absence of trees (as a consequence of deforestation), the soil becomes vulnerable to erosion.

Deforestation of sloped lands is often accompanied by landslides, which can be explained by the loss of soil adhesion due to the absence of trees. The extent of erosion is amplified by certain natural calamities such as floods (note that the plant litter found on forest surfaces helps reduce the amount of soil washed away).

Effects of Deforestation on Biodiversity

Forests play host to a wide spectrum of wildlife. In fact, tropical rainforests are believed to be the most diverse ecosystems on the planet. Deforestation poses a grave threat to this biodiversity. On a local scale, the clearing of forest land can cause a decline in the population of certain species. On a global scale, however, deforestation can result in the extinction of several desirable species.

Approximately 50,000 species (consisting of plants, animals, and insects) are lost every year as a consequence of deforestation. Studies suggest that over 40% of all plant and animal species in the Southeast Asian region will undergo extinction over the course of the 21st century.

The implications of large-scale biodiversity loss are difficult to predict, but it is highly probable that it would have an adverse effect on the food web. Also, the extinction of one species may play a leading role in the extinction of another via the phenomenon of co extinction.

Other Effects of Deforestation

How Does Deforestation Affect the Economy?

Deforestation can, directly or indirectly, provide a channel for the propagation of many infectious diseases. Since deforestation is often accompanied by the loss of indigenous species, it is not uncommon for new species to flourish in deforested lands.

In Malaysia, the geographic shift of the fruit bat population (as a consequence of deforestation) facilitated the transmission of the Nipah virus. Fruit bats, which are known to be vectors of the disease, lost their natural habitat due to deforestation and started feeding in the orchards surrounding habited areas. Through proximity, the Nipah virus spread from fruit bats to pigs, and then to humans.

Increased soil erosion (due to deforestation) can result in the formation of pools of stagnant water. These pools serve as breeding grounds for mosquitoes, which are vectors of several deadly diseases such as malaria and yellow fever. Some theories also suggest that deforestation has contributed to the propagation of the human immunodeficiency virus (HIV).

How can Deforestation be Controlled?

Role of Governments and other Administrative Authorities

The following strategies can be implemented by governments to combat deforestation:

Every human on the planet shares the responsibility of preserving its resources (for other humans, other species, and for future generations). An individual can contribute to the prevention of deforestation by implementing the 3R (Reduce, Reuse, and Recycle) principle in their daily lives.

Individuals can also combat deforestation by spreading awareness about its negative consequences and participating in tree-planting campaigns.

To learn more about deforestation and other important environmental concerns (such as soil pollution), register with BYJU’S and download the mobile application on your smartphone.

What are the key causes of deforestation?

One of the leading causes of deforestation is agriculture and cattle grazing. Forest land is frequently cleared and transformed into agricultural land in order to keep up with the ever-increasing demand for food (which can, in turn, be linked to overpopulation). The four commodities that are majorly responsible for tropical deforestation include palm oil, timber, soy, and beef. Generation of grazing land for cattle is another leading cause of deforestation.

What are the environmental effects of deforestation?

One of the most important negative consequences of deforestation is global warming and climate change. Over 20% of the world’s greenhouse gas emissions can be sourced to the deforestation of tropical rainforests. Since the roots of trees provide support to the surrounding soil, deforestation also contributes towards soil erosion (the removal of trees makes the soil vulnerable to erosion).

How can deforestation affect the water cycle?

Trees are known to absorb groundwater through their roots and subsequently release it into the atmosphere via the process of transpiration. Thus, trees play a vital role in the water cycle by regulating the atmospheric water vapour levels and also by providing a platform for water to enter the atmosphere from below-ground levels.

How can I as an individual help reduce deforestation?

The following practices can be incorporated to reduce the demand for forest products:

How does deforestation affect biodiversity?

Tropical rainforests are known to be the most diverse ecosystems on the planet. Since deforestation involves the quelling of these ecosystems, the habitats of many species become endangered. In fact, deforestation also endangers the population of some microbes that work on the recycling of nutrients and the purification of water.
Test your Knowledge on Deforestation!
Q5