A soap is a water-soluble compound which is made via a process called saponification by the reaction between sodium hydroxide or potassium hydroxide with vegetable or animal oil (fats).

Amphipathic molecules that contain charged hydrophilic or polar groups at the end of long lipophilic hydrocarbon groups are called detergents. The charged hydrophilic group is also called the head and the long lipophilic hydrocarbon group is called the tail. Detergents are also known as surfactants as they have the ability to decrease the surface tension of water. 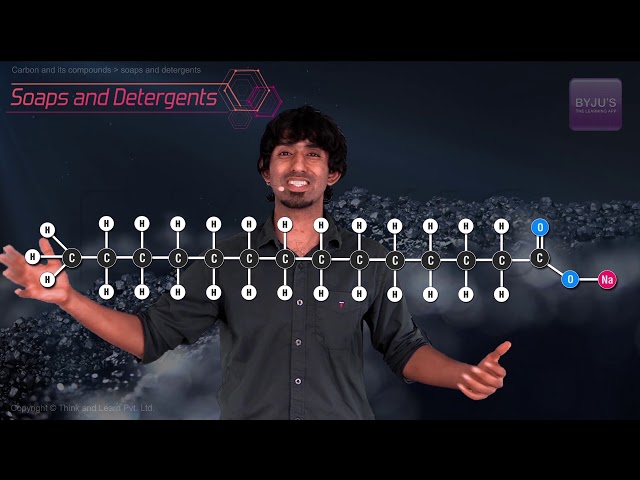 Cleansing Action of Soaps and Detergents

Most of the dirt is oily in nature and oil does not dissolve in water. The molecule of soap constitutes sodium or potassium salts of long-chain carboxylic acids. In the case of soaps, the carbon chain dissolves in oil and the ionic end dissolves in water. Thus, the soap molecules form structures called micelles. In micelles, one end is towards the oil droplet and the other end which is the ionic faces outside. Therefore, it forms an emulsion in water and helps in dissolving the dirt when we wash our clothes.

Soap is a kind of molecule in which both the ends have different properties. 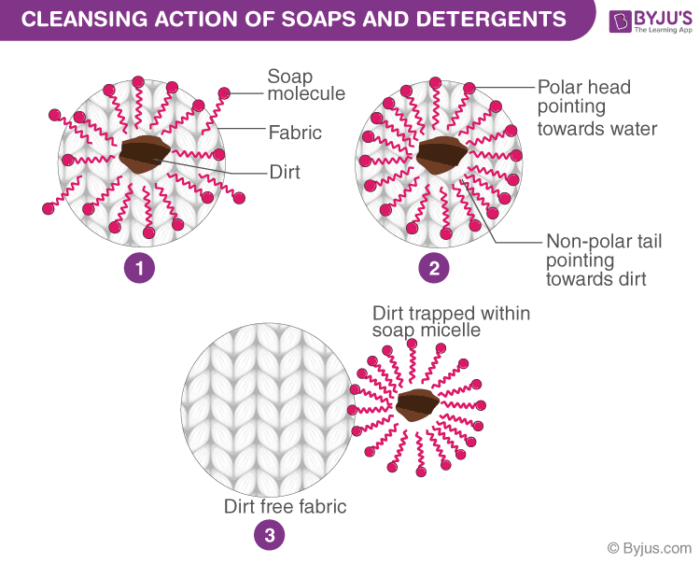 In water, the soap molecule is uniquely oriented which helps to keep the hydrocarbon part outside the water. When the clusters of molecules are formed then hydrophobic tail comes at the interior of the cluster and the ionic end comes at the surface of the cluster and this formation is called a micelle. When the soap is in the form of micelles then it has the ability to clean the oily dirt which gets accumulated at the centre. These micelles remain as colloidal solutions. Therefore, the dirt from the cloth is easily washed away. The soap solution appears cloudy as it forms a colloidal solution which scatters light.

Read more about Soap and Detergents. We have briefly seen the properties of soaps and detergents, for any further query on this topic install BYJU’S learning app and enjoy an innovative approach to learning.

Take up a quiz on Soaps and detergents
Q5