Watch a video lecture on the Gandhara school of art below. 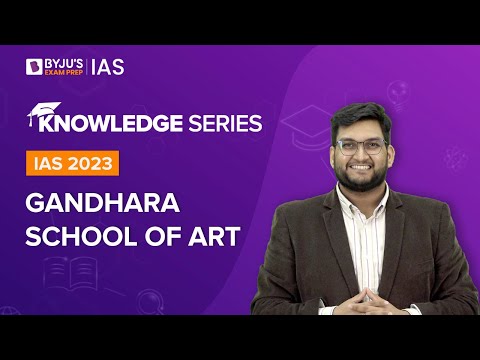 Gandhara school of art was one of the major schools of art in the history of ancient India. Although being an intricate part of Indian history, it is uniquely associated with the Greco-Roman style of art.

The combination of these Greco-Roman and Indian ideas along with the influence of other foreign traditions such as from China and Iran resulted in the formation of a distinct style known as the Gandhara School of art. The topic is important for IAS Exam from the perspective of Art & Culture.

This style of art was closely associated with Mahayana Buddhism and hence the main theme of this art was Lord Buddha and Bodhisattvas. Thus, it can be conjectured that in idea and conception this style was Indian and in execution it was foreign. One example of the Gandhara style of art is the Bamiyan Buddha statues.

It mostly flourished in the areas of Afghanistan and present North-Western India. The prominent locations were Taxila, Peshawar, Begram, and Bamiyan. The period around which the Gandhara school of art flourished could be said to be from the 1st century BCE to 4th century CE.

There was extensive use of black stone and stucco. Stucco was a kind of plaster that was used for many structures including the freestanding ones under this style of art. The free-standing structures included many chaityas, Viharas, and stupas.

The striking feature of the Gandhara School of art shows a very realistic and natural depiction of features in perfection. Although it was dominated by the themes of Lord Buddha, however, there were images on other subjects also such as the images of the Greek God Apollo and certain kings as well.

The Greco-Roman effect on Gandhara art can be traced through:

Thus, Gandhara School of Art can be said as an influence and culmination of both the Indian as well as foreign traditions due to its strategic location.

What is the subject matter of Gandhara school of art?

What is Gandhara school of art known for?

The Shakas and the Kushanas were patrons of Gandhara School. Gandhara school is known for the first sculptural representations of the Buddha in human form.