India has a rich and varied culture as characterized in the later art forms of the subcontinent, dating from the 14th through the 19th century. Art and culture is an important topic in the IAS Exam. A substantial number of questions can be asked from the art and culture segment in UPSC Prelims as well as Mains examination. Here we are giving the major difference between the Gandhara School of Art and the Mathura school of Art.

The Gandhara School of Art

During the Kushana Empire’s rule, the Gandhara art prospered in India. Above all, Kanishka, the greatest of the Kushanas was a famous backer of art and architecture. The Gandhara School of art flourished in his reign. Gandhara School was profoundly influenced by Greek methodologies.

The figures of Buddha were more spiritual and carved mainly in grey and bluish-grey colour with the finest details.

The Mathura School of Art

The Mathura School of Art was entirely influenced by Indianism. The stone used in the Mathura school of arts was red sandstone. The sculptures were less spiritual.

They mostly used the spotted red sandstone for making sculptures and statues. The initial images of the Buddha and the Bodhisattva are happy and fleshy figures with little spirituality about them. The Mathura School of arts prided themselves on creating images of Buddha and they also made statues of many gods and goddesses such as Jain Tirthankaras.

To know more in detail about the Buddha and his Teachings, visit the linked article 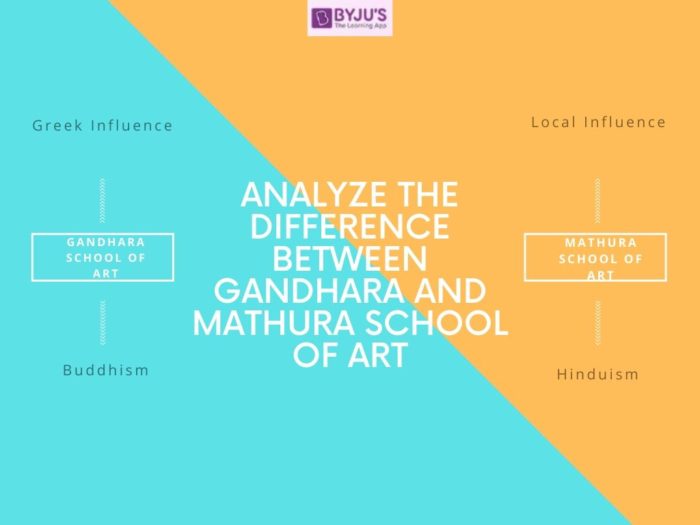 Difference between Mathura and Gandhara School of Art

Although both the  Mathura and Gandhara schools of Art share some rudimentary similarities between themselves, there are some fundamental differences between the two: which is highlighted  in the table given below:

Thus learning about the various schools of art is essential as this is an important topic that can be asked in the IAS exam. You can also refer to the following links to prepare for the Art and Culture segment of the exam.

Frequently Asked Questions about Gandhara and Mathura School of Art

Who founded Gandhara school of art?

The Gandhara School of art had also developed in first century AD along with Mathura School during reign of Kushana emperor Kanishka. Both Shakas and Kushanas were patrons of Gandhara School, which is known for the first sculptural representations of the Buddha in human form.

What is Mathura school of artl?

The Art of Mathura refers to a particular school of Indian art, almost entirely surviving in the form of sculpture, starting in the 2nd century BCE, which centered on the city of Mathura, in central northern India, during a period in which Buddhism, Jainism together with Hinduism flourished in India.