This Day in History - What happened today?

The historical events hold a lot of value for aspirants who are sitting for competitive exams including that of IAS Exam. BYJU’S initiative called ‘This Day in History’ covers every day of the calendar and recalls a major event that happened in the history of India and the world on this date which changed the course of history.

This article collaborates all historical days to make IAS Aspirants’ preparation for UPSC Civil Services Exam easy and more effective. The facts given will be helpful for aspirants in UPSC Prelims and UPSC Mains exams and many topics are mentioned in UPSC Syllabus too.

Significance of This Day in History Initiative

While following what has happened on a particular day, IAS aspirants get to know facts about major historical events and the intricacies related to them. ‘This day in History’ segment will bring answers to the following questions: 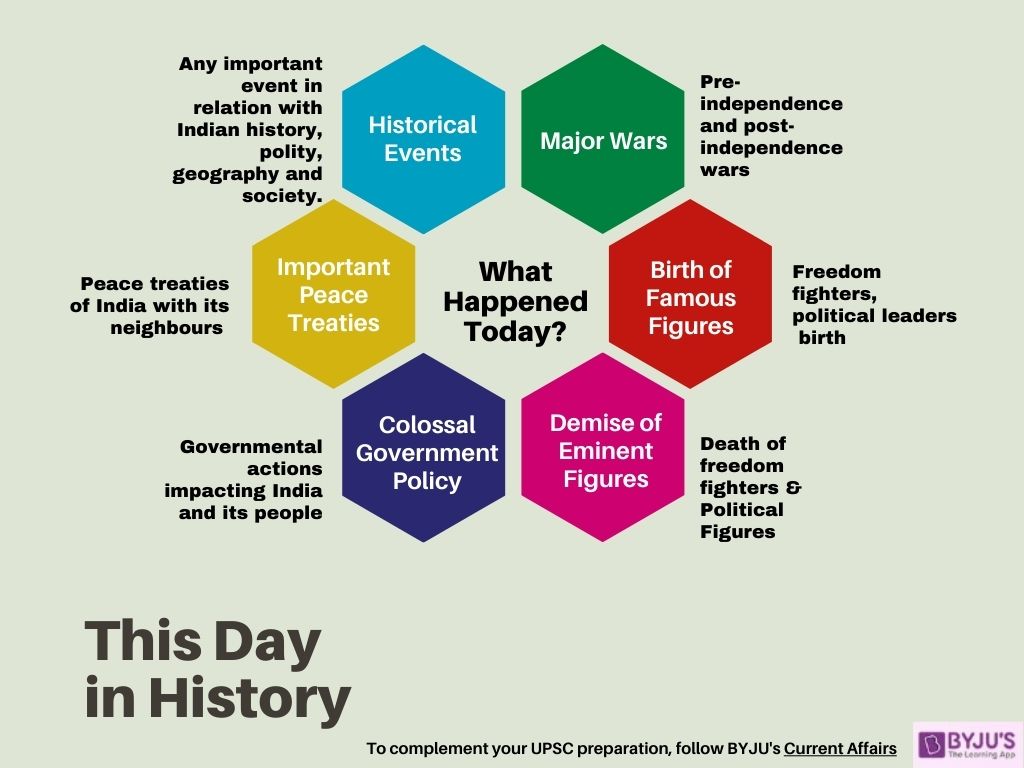 How can UPSC aspirants use ‘This Day in History’ initiative for their preparation?

Candidates can take help from UPSC Previous Years’ Question Papers to see how the information provided in the ‘This Day in History’ segment can be utilized as per the need of the questions.

This new section incorporates an important event that occurred on this day in history and explains the significance of the day for India and also the world.

The article will give you important dates of historical events. Check the list of examples of important dates that will be brought out on This Day of History segment below:

This section will go hand-in-hand with your UPSC 2020 preparation as it will enhance your knowledge about Indian history, polity and economy among others and help in improving your memory and associate with it what you have studied for the day. Read on to understand how to approach ‘This Day in History’ for your UPSC preparation:

We are giving you some random dates and examples to help you understand how to utilize the segment, ‘This Day in History.’

#History – This Day in History

Aspirants should collect the following facts:

#Polity – This Day in History

1. 22nd July–  Adoption of the National Flag of India

Aspirants should get the facts about the National Flag of India. Those facts can be used in Mains answers (GS 1, 2, essay and history optional papers.) Afterwards, aspirants can also check ‘National Symbols of India’ article for similar articles.

#Economy – This Day in History

Aspirants should know about the causes, impact and benefits of the demonetization in  India. They can read the detailed Demonetization essay at the linked article.

Reading ‘This Day in History’ regularly will help candidates to remember and recall important dates and events in the history of India easily.