A serious aspirant knows that along with Prelims GS-I, the aptitude paper called ‘Civil Services Aptitude Test’ (CSAT) plays an important part in your success in the preliminary stage. CSAT sample questions are important for aspirants as these will provide them with sufficient practice before they write the actual exam.

Candidates can practice CSAT questions given below and also can download CSAT Sample Paper 1,2,3 & 4 from the links provided:

Q2. A man wants to reach a window which is 40 feet above the ground. The distance from the foot of the ladder to the wall is 9 feet. How long should the ladder be?

Q3. Which figure will replace the question mark? 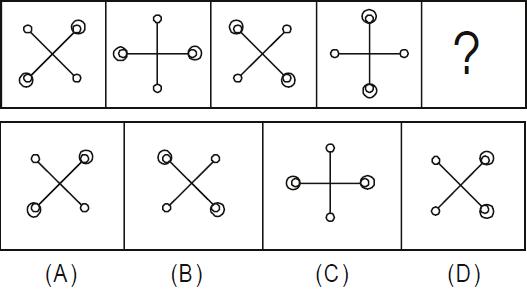 Q4. A, B, C, D, E, F and G are members of a family consisting of four adults and three children, two of whom, F and G are girls. A and D are brothers and A is a doctor. E is an engineer married to one of the brothers and has two children. B is married to D and G is their child. Who is C?
a. E’s daughter
b. G’s brother
c. F’s father
d. A’s son 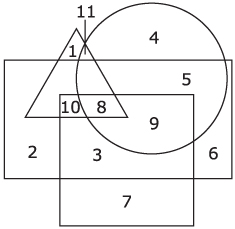 Q10. Roy and Kavi are working on an assignment. Roy takes 6 hours to type 32 pages on a computer, while Kavi takes 5 hours to type 40 pages. How much time will they take, working together on two different computers to type an assignment of 110 pages?
a. 8 hours 15 minutes
b. 10 hours
c. 7 hours 50 minutes
d. 6 hours 40 minutes

Study the paragraph and answer the questions (questions 12 to 15) that follow:-

The most important reason for this state of affairs, perhaps, is that India was the only country in the world to truly recognise the achievements of the Soviet Union-rather than merely focus on the debilitating faults that Communism brought to its people. The people of India realised that the achievement of one hundred percent literacy in a country much, much larger than its own and with similarly complicated ethnic and religious groupings, the rapid industrialization of a nation that was a primarily agrarian society when the Bolshevik revolution took place in 1917, the attendant revolutionary steps in science and technology, the accessibility of health care (primeval according to Western standards, perhaps, but not according to Indian ones) to the general population, and despite prohibition of the government of the time the vast outpourings in literature, music, art, etc. are momentous and remarkable feats in any country. In contrast, all that the West focused on were the massive human rights violations by the Soviet State on its people, the deliberate uprooting and mass migrations of ethnic peoples from one part of the country to another in the name of industrialization, the end of religion. In short, all the tools of information were employed to condemn the ideology of Communism, so much at variance with capitalist thinking. The difference with the Indian perception, I think here is, that while the Indians reacted as negatively to what the Soviet governments did to its people in the name of good governance (witness the imprisonment of Boris Pasternak and the formation of an international committee to put pressure for his release with Jawaharlal Nehru at its head), they took the pain not to condemn the people of that broad country in black and white terms; they understood that mingled in the shades of grey were grains of uniqueness (The Russians have never failed that characteristic in themselves; they have twice experimented with completely different ideologies, Communism and Capitalism both in the space of a century).

Q12. Which of the following statements according to the passage is correct?

a. India took heed of the weak faults of Russian policies and systems.
b. The process of industrialisation had already started when the Russian Revolution took place in 1917.
c. India seriously commended the achievements of Russia, i.e., hundred percent literacy and rapid industrialisation.
d. Literature, art and music received a setback during the communist regime in Russia.

Q13. The Indian perception of the Soviet Union was always
a. Neutral
b. Applauding
c. Counter-reactionary
d. Critical

Q14. The West did not focus on
a. Massive human rights violation of the Soviet state on its people.
b. Rapid growth of nuclear weapons in Russia.
c. Deliberate uprooting and mass migration of ethnic people in the name of industrialisation.
d. Both (a) and (c)

Q17. A girl introduced a boy as the son of the daughter of the father of her uncle. The boy is a girl’s
a. Brother
b. Son
c. Nephew
d. Uncle

The best conclusion from this statement is that

For the remaining CSAT Sample Paper 1 check the download link:

For UPSC 2020, practising CSAT from today will prove beneficial for aspirants. These CSAT questions will help you to be in touch with the aptitude questions and be confident on the exam day.