Aspire to be a part of India's elite bureaucracy?

Check your Eligibility here and get free study material from BYJU'S !

While we strive to provide you with updated information, please go through the latest official exam notification to check the detailed eligibility criteria for the specific exam year to avoid any confusion.

The syllabus for UPSC Prelims is discussed in-depth in this article. Ever since the pattern change in the UPSC Prelims exam in 2011, the syllabus has remained the same. Also, aspirants must note that the conducting body has announced the exam date for the upcoming UPSC recruitment. The prelims will be held on June 5, 2022. Thus, candidates can prepare themselves accordingly.

It is important to understand what is UPSC Prelims syllabus is, and this article provides you with the answer in detail.

The UPSC Prelims syllabus can be divided into two  parts: 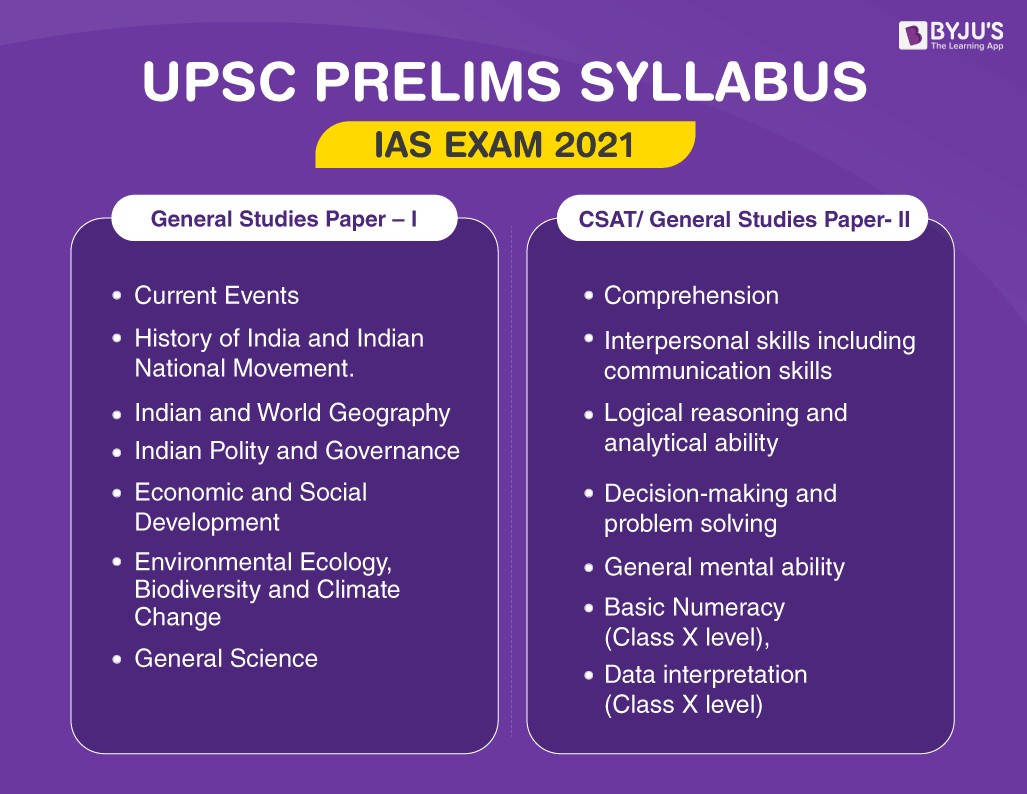 The General Studies Paper-II in UPSC Prelims is often referred to as CSAT or Civil Services Aptitude Test. The CSAT exam has been part of controversy ever since its introduction. A section of candidates has alleged that CSAT is negatively biased towards them. In 2014-2015, CSAT was declared to be a ‘Qualifying Exam’ with a 33% pass criteria. The GS II or CSAT intends to check the analytical skills of the IAS aspirants.

What is UPSC Prelims Syllabus for GS I?

The GS I paper in the IAS prelims comprises topics from History, Geography, Economy, polity and governance, general science, and most importantly current affairs. The subtopics are mentioned below.

In UPSC Prelims (and in Mains), the focus on dynamic questions has increased in recent years. Even from sections like Polity which were considered to be static, more and more questions seem to have their base in some recent issue/topic in the news. Moreover, Indian Economy and Environment portions in the UPSC Prelims Syllabus focus mostly on Current Affairs.

A few essential sources for current affairs preparation are:

The UPSC 2022 notification was released on 2nd February 2022. The notification gives all the relevant details about the exam, how to apply, the UPSC syllabus, eligibility criteria, etc. Candidates can keep a track of the UPSC Online Application, information of which is provided in the linked article.

The syllabus of UPSC Prelims GS 1 mentions that the paper will have questions on “History of India and Indian National Movement”. This is a broad classification and to prepare History as per UPSC Prelims syllabus, candidates need to use “divide and conquer” to speak.

The art, culture and architecture in the ancient and medieval times are quite crucial from the IAS exam perspective, although it isn’t explicitly mentioned in the syllabus for UPSC Prelims.

As History portion overlaps in UPSC Syllabus for Prelims and Mains, aspirants should make notes keeping in mind the descriptive nature of questions in IAS Mains, and practice MCQs for Prelims.

As per the UPSC Prelims Syllabus, Geography portion comprises Physical, Social, Economic Geography of India and the World. Similar to History, Geography is a vast subject with an overlap in both UPSC syllabus for Prelims and Mains. Also, Geography is an optional subject choice in IAS Mains.

Note – Part of Geography portion and Environmental Ecology overlap in the syllabus of UPSC Prelims.

As per the UPSC Prelims Syllabus, Polity portion comprises Constitution, Political System, Panchayati Raj, Public Policy, Rights Issues, etc. Polity has a lot of static and dynamic elements, and it has an overlap with the syllabus of UPSC Prelims and Mains.

The UPSC Syllabus for Prelims mentions the broad topic Economic and Social Development, which includes Sustainable Development, Poverty, Inclusion, Demographics, Social Sector initiatives, etc. While Indian Economy portion is common to the syllabus of UPSC Prelims and Mains, Economics is also an Optional Subject in the UPSC Mains.

For UPSC Prelims, the focus should be on current affairs related to the Indian Economy and basic concepts.

In UPSC civil services prelims syllabus, candidates should not spend a lot of time preparing General Science from theory books as most questions come from topics/issues in the news. However, some focus areas as a comprehensive reference are given below.

You can also get some tips for general science preparation for IAS here.

Furthermore, certain topics from prelims are also a part of the UPSC Syllabus for the mains examination. Candidates must critically analyse the topics and paper pattern comprehensively and then move on with their preparation strategy.

It is actually the depth of the syllabus for the UPSC Exam, that makes cracking it all the more challenging. Thus, the detailed prelims syllabus mentioned above will guide candidates through their journey of joining the civil services.

What is the age limit for IAS?

Which is tough, UPSC prelims or mains?

One cannot say for sure which is tough, UPSC Prelims or Mains. But generally the UPSC Mains are regarded as being more tough than prelims as the mains requires lot of critical thinking and writing skills, while prelims is only consists of MCQ type of questions. page.

Is NCERT enough for UPSC prelims?

NCERT books are a crucial resources to clear the UPSC Prelims. So it can be said that other sources are just as important as NCERT books are.

Is 2 months enough for UPSC Prelims?

Although it is usually recommended that one starts preparing once the UPSC dates are announced, with proper dedication and strategy, one can pass the UPSC Prelims in two months.

Is there maths in UPSC Prelims?

Yes there will maths in the form of basic numeracy (numbers and their relations, orders of magnitude, etc.) – Class X level).