In the sixth century BCE, the socio-religious norms that were well established & followed were criticised by the then great scholars like Confucius in China, Zoroaster in Iran, Parmenides in Greece. They laid emphasis on ethical and moral values. India also witnessed the emergence of two alternate religions – Buddhism & Jainism. Both these religions believed and propagated non-violence, good social conduct, charity & generosity. These religions emphasised that true happiness does not lie in materialism or performance of rituals.

Buddhism is an important topic for the UPSC exam and other government exams. It is an integral part of the history syllabus. This is a comprehensive article on Buddhism, including the life of the Buddha, his teachings, Buddhist symbols, Buddhist Councils, and the causes for the spread and decline of the religion in India.

The various causes that led to alternative religions are:-

Understand the differences between Buddhism and Jainism in the linked article.

The early Buddhist literature is divided into canonical and non-canonical texts:

The earliest compilation of Buddhist teachings which were written on long, narrow leaves is “The Tipitakas” (in Pali) and “Tripitaka” (in Sanskrit). All the branches of Buddhism have the Tripitakas (also called three baskets/collections) as part of their core scriptures, which comprise three books –

The Tipitakas are divided into Nikayas (books):

The Gautama Buddha was born to Suddhodana (chief of republican Sakya clan) as Siddhartha in 563 BCE on Vaishakha Poornima day at Lumbini (Nepal). He lost his mother (Mahamaya) just a few days after his birth and was brought up by his stepmother Gautami. There were 32 birthmarks on his body and Brahmanas predicted that either he would be a world conqueror or a world renouncer. He lived a life of luxury and comfort in his early years.

Buddha urges that one should not cling to anything (including his teachings). The teachings are only Upaya (skillful means or expedient tools) and are not dogma. It is fingers pointing at the moon and one should not confuse the finger for the moon.

The three pillars of his teachings are:

The four noble truths form the core of the teachings of Buddhism, which are:

The Eight-Fold Path is more about unlearning rather than learning, i.e., to learn in order to unlearn and uncover. The path consists of eight interconnected activities and is a process that helps one to move beyond the conditioned responses that obscure one’s nature. The Ashtangika-Marga consists of the following:

In addition to these, monks and nuns were strictly instructed to observe the following three additional precepts-

The teachings of the Buddha follow the middle path (the one between extreme indulgence and extreme asceticism). Buddha has emphasised that if a person follows the eightfold path, then he will reach his destination (Nirvana) without the involvement of the monks/nuns. In the above-eightfold path, the word “right” signifies “whole”,” integral”, “complete”, “perfect”.

The ultimate aim of the Buddha’s teachings is the attainment of Nibbana/Nirvana. The Nibbana is a Pali word formed of ‘Ni’ and ‘vanna’, ni means negative and vanna refers to lust or craving. So, Nirvana means departure from cravings and lust. It signifies dying out or extinction of desire, greed, hatred, ignorance, attachment and the sense of ego. In Nibbana, nothing is eternalised nor is anything annihilated, other than the suffering. It is a supramundane state and an attainment (Dhamma) which is within the reach of all, even in this present life. The main difference between the Buddhist conception of Nibbana and the non-Buddhist concept is that Nibbana can be attained during life also. In the non-Buddhist concept, eternal heaven is realised only after death or union with God. When Nibbana is achieved in this life, it is called Sopadisesa Nibbana-dhatu. When an Arhat attains parinibbana (used for the death of enlightened beings such as Buddha), after the dissolution of his body, it is called Anupadisesa Nibbana-dhatu.

The philosophy of Buddha accepts impermanence and transmigration but denies the existence of God and believes that the soul is a myth. Buddhism teaches the existence of ten realms of being and one can be born as any one of them. At the top is Buddha followed by Bodhisattva (an enlightened being destined to be a Buddha but purposely remains on earth to propagate teachings), Pratyeka Buddha (a Buddha on their own), Sravaka (disciple of Buddha), heavenly beings (superhumans, angels), human beings, Asura (fighting spirits), beasts, Preta (hungry ghosts) and depraved men (hellish beings). These ten realms of existence are “mutually immanent and mutually inclusive”, each one having in it the remaining nine realms, e.g., the realm of human beings has all other nine states – from hell to Buddhahood in it. A man can be selfish or can rise to the enlightened state of Buddha. In Buddhism, karma is the result of actions depending on the intentions more than the action itself. Rebirth is the result of the karma of the previous life. Though Buddhism lays emphasis on non-violence, it doesn’t forbid masses from eating meat.

Other Important Aspects of Buddhism

Some other important aspects of Buddhism include:

The Buddha believed that a human being is a collection of Five Aggregates and a proper understanding of these is an essential step towards the attainment of freedom from suffering:

All the Five Aggregates of experience are impermanent and constantly changing, like our perceptions change over time. Buddha stresses that the utility of the five aggregates is to make people understand them in terms of impersonal processes and through this understanding, they can get rid of the idea of self and can overcome hope and fear. They can regard happiness and pain, praise and blame and everything with equanimity, with even-mindedness and thus will then no longer be subject to the imbalance of alternating between hope and fear.

The Law of Dependent Origination explains the reason of suffering (Dukkha), as well as the key to its liberation. The law is associated with twelve links (Nidanas)-all arranged in a wheel and one leading to the next.  This principle can be given in a short formula of four lines-

When this is, that is

This arising, that arises

When this is not, that is not

This ceasing, that ceases.

This law emphasizes an important principle that all phenomena in this universe are relative, conditioned states and do not arise independently of supportive conditions.

The twelve links of the Dependent Origination are:

All the links are interrelated and dependent on each other, thus there is no starting point nor end point-a cyclic phenomenon.

Dividing the 12 links into three groups-

Together, the defilements and actions explain the origin of suffering and particular circumstances in which each one of us finds ourselves, or in which we are born. The Buddha emphasizes that he who sees Dependent Origination sees the Dharma and he who sees the Dharma sees the Buddha. If one can see and understand the functioning of dependent origination, he can then set about breaking this vicious circle of dependent origination by removing the impurities of the mind – ignorance, craving and clinging. Once these impurities are eliminated, actions will not be performed, and habit-energy will not be produced. Once actions cease, rebirth and suffering will also cease.

Reasons for Spread & Popularity of Buddhism

Buddhism gained wide acceptance and popularity and spread like a wildfire throughout India. With the support of emperor Ashoka, it spread its wings to central Asia, west Asia and Sri Lanka. Various causes for the rise and spread of Buddhism are:

Buddhism tried to mitigate the evils resulting from the new material life of the sixth century BCE. Since the Buddhists had a keen awareness of the problems (social & economic disparities), they presented innovative solutions to these concerns. Buddhism asked people NOT to accumulate wealth, indulge in cruelty or violence – ideas that were welcomed by the people.

From the early 12th century, Buddhism began to disappear from the land of its birth. Various causes that led to the decline of Buddhism are: 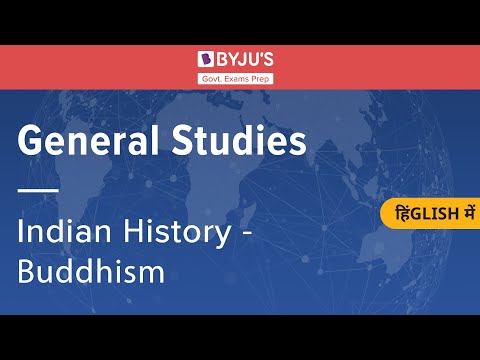 Get a gist of all the Buddhist Councils and important texts here.

Know the differences between Mahayana and Hinayana Buddhism in the linked article.

Brahmanism is the religion that developed out of the historical Vedic religion, based on Vedas and Upanishads and an outcome of the ritualistic system led by brahmin priests in the Hindu society. Buddhism has developed from the teachings and philosophy of the life of The Buddha.

Brahmanism strongly advocates rituals to lead a good life whereas Buddhism denies all rituals & emphasizes self-development, self-exploration through dhamma, the precepts, the practice, the Four Truths, and the Eight-Fold Path.

The main difference between Buddhism & Brahmanism is the notion of belief in there being a soul (Brahmanism) and no soul/non-self (Buddhism).

Brahmanism believes that one is born into a caste system (varna system), however, Buddhism does not practise the caste system. The Sangha had members from all castes such as Upali (who was a barber), Chunda (a blacksmith who fed Buddha his last meal), Anirudha (prominent Kshatriya monk). The Pali canon also reverses the order of rank and places the Kshatriya varna higher than the Brahmanas. Even though Buddhism was more inclusive than the Brahmanical tradition, yet it supported social order based on classes and did not aim at abolishing social differences. Buddhists maintained status quo in certain traditions e.g., there were restrictions on the entry of debtors, slaves and soldiers without permission from their respective masters. Both (Brahmanism & Buddhism) did not participate directly in production and lived on alms given by society.

Q 1. What are the four noble truths of Buddhism teachings?

Ans. The four noble truths form the core of the teachings of Buddhism, which are:

Q 2. What led to the spread of Buddhism?

Ans. Buddhism gained a lot of acceptance and popularity due to the support from Emperor Ashoka. Other reasons for its spread include the liberalism it offered and the basic rituals it promoted. Also, the calm and composed personality and aspects of Buddha and Buddhism were morally and philosophically acceptable by the mass. The royal patronage of Buddhism also accounted for its rapid rise.