Rajya Sabha TV programs like ‘The Big Picture’, ‘In Depth’ and ‘India’s World’ are informative programs that are important for UPSC preparation. In this article, you can read about the discussions held in the ‘Big Picture’ episode on “NPR – National Population Register” for the IAS exam. Candidates can watch the full episode towards the end of the article.

Who is a “usual resident”?

Who is responsible for NPR?

Difference between NPR and the Census:

Difference between NPR and NRC:

Funding for the process:

The confusion stems largely from the legitimate and motivated apprehensions with respect to the Citizenship Amendment Act (CAA). It would be wrong on behalf of the government to dismiss genuine concerns regarding CAA, however, the sole issue of CAA should not become a stumbling block in the implementation of important tools of national security such as NRC and NPR. 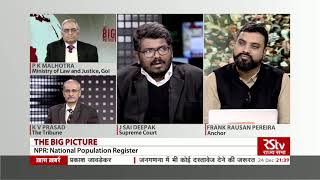