Rajya Sabha TV programs like ‘The Big Picture’, ‘In Depth’ and ‘India’s World’ are informative programs that are important for UPSC preparation. In this article, you can read about the discussions held in the ‘Big Picture’ episode on “India – US Trade Relations” for the IAS exam. 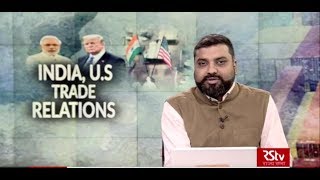 Status of India and the United States Trade ties:

The overall status of the trade ties between the two countries has strengthened.

US Concerns regarding trade with India:

How much progress can India get out of this visit?

What does the US want from India with respect to the issue of trade surplus?

Would the lack of a major trade deal affect the US-India relationship?

Why is there so much confusion in President Trump’s visit regarding the possibility of making a deal?

What points does India need to focus on and would Harley Davidson still be an issue?

Is the coronavirus epidemic in China an opportunity for India and the US going forward?