Jet streams are fast flowing, narrow meandering air currents in the atmosphere of the Earth.

Jet streams on earth are westerly winds as in flowing west to east and may start, stop and split into two or more streams.

This article will give details about Jet Streams within the context of the IAS Exam. 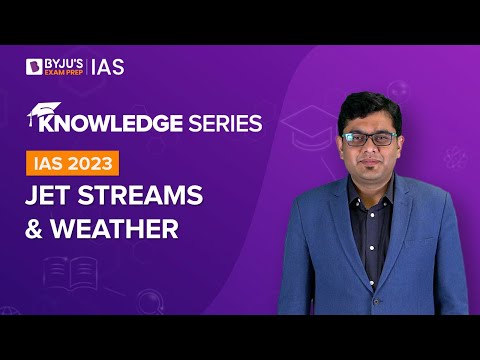 The discovery of the jet stream can be traced back to the explosion of Krakatoa volcano in 1883. After the eruption, weather observers tracked and mapped the effects of the sky for several years. This phenomenon was termed as the “equatorial smoke stream”.

Similar phenomenon was observed by Japanese meteorologist, Wasaburo Oishi in the 1920s near Mt. Fuji.

The American pilot Wiley Post is credited with the discovery of jet streams when he became the first pilot to fly around the world in 1933. He managed this feat through a pressurized suit that allowed him to fly above 6200 meters.

Many sources credit real understanding of the nature of jet streams to regular and repeated flight-path traversals during World War II.

What are the causes of Jet Stream?

The jet streams are strongest under the tropopause. If two air masses of different temperatures or densities meet the resulting pressure difference caused by the density difference is highest within the transition zone.

Jet Stream has its uses in aviation. It can be safely said that it is a crucial component. The jet stream around the northern polar regions is the most important one. It is also used for weather forecasting.

A phenomenon known as clear-air-turbulence (CAT) is often associated with jet streams, it is caused by vertical and horizontal wind shear. The CAT is at its strongest on the cold air side of the jet and just under the axis of the jet. This phenomenon can cause aircraft to lose control and plummet and does present a safety hazard for passengers.

For notes on UPSC Geography, visit the linked article.

Other than use in aviation, scientists are also figuring out methods through which the wind energy can be harnessed through jet streams. Even 1% of it would be needed to meet the world’s energy needs at present although the technology to develop it will take decades to come to fruition.

What is a jet stream and what causes it?

What happens if the jet stream stops?

If the jet stream stops, the whole pattern of global temperatures would be different, with the air cooling much more gradually across the latitudes and the striking temperature difference between equator and poles, would be gone.