Those who wish to sell cattle — bulls, cows, buffaloes, steers, heifers and camels — may do so only after they formally state that the animals have not been “brought to the market for sale for slaughter”. 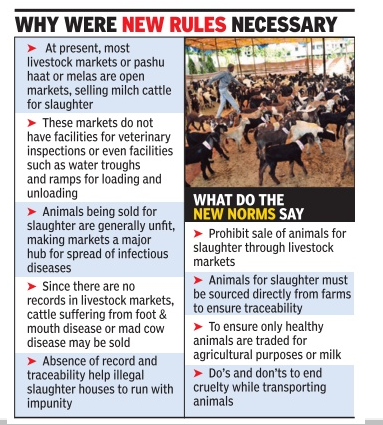 Provisions to prevent cruel transport and treatment of animals:

Impacts of the new rules framed:

According to data collated by NREGA Sangharsh Morcha, a platform that tracks the implementation of the workfare programme.

What does the act say? The prohibition of cow slaughter is also one of the Directive Principles of State Policy contained in Article 48 of the Constitution. It reads, “The State shall endeavour to organise agriculture and animal husbandry on modern and scientific lines and shall, in particular, take steps for preserving and improving the breeds, and prohibiting the slaughter of cows and calves and other milch and draught cattle.”