Pakistan has been placed on the lowest rung, or “blacklist”, of the Financial Action Task Force’s Asia Pacific Group (APG) for non-compliance and non-enforcement of safeguards against terror financing and money laundering.

What are the consequences for Pakistan?

1. Centre responds to downturn with steps to boost growth

With Finance Minister Nirmala Sitharaman announcing a slew of measures to reduce the burden on the private sector, the government has come out on the front foot to try to boost the sector’s sentiments. 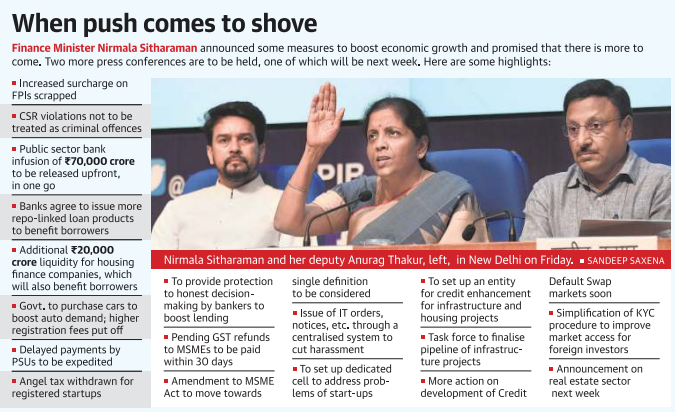 Significance of the announcements:

Finance Minister Nirmala Sitharaman announced a host of measures to boost economic growth which included the Centre’s proposal to set up a development financial institution (DFI) to meet the infrastructure financing needs.

Finance Minister Nirmala Sitharaman announced a slew of measures to boost demand in the auto sector. In order to mitigate genuine difficulties of startups and their investors, it has been decided that the relevant provisions of Section 56 of the Income Tax Act, which is commonly called the ‘angel tax’, shall not be applicable to a startup registered with the Department for Promotion of Industry and Internal Trade.

Other announcements for Startups and MSMEs:

The Amazon rainforest, often referred to as the lungs of the Earth, has been ravaged by a record number of fires this year, sparking global outrage over Brazil’s environmental policies.

What caused these fires?

Impact on the agricultural Sector

1. An end to arms control consensus

In 1985, the two countries entered into arms control negotiations on three tracks.

End of the Cold War

How it all began?

The Composite Water Management Index (CWMI) released by NITI Aayog is envisioned to bring about much-required improvements in water resource management and conservation in India in a coherent and collaborative manner. The Index will be a public platform that provides an annual snapshot of the water sector status and the water management performance of the different states and UTs in India. The Index will measure both the overall progress made by states in water management and the incremental improvement in performance across time. Gujarat has topped the rankings for two years in a row.

Asia Pacific Group is an inter-governmental organization working to implement international standards for the prevention of money laundering and terrorist financing in the Asia Pacific region. It has 41 member countries, including India and Pakistan. The APG directly assists its members in introducing Anti Money Laundering (AML) legislation. Structuring its approach to the needs of individual countries, the APG also provides guidance for setting up AML agencies and financial intelligence units.

The Mogao Caves also known as Caves of the Thousand Buddhas is located at a religious and cultural crossroads on the Silk Road, in Gansu province, China. The caves are included in the UNESCO World Heritage List.