The West Bengal (Prevention of Lynching) Bill, 2019 was passed by the West Bengal Assembly to prevent and punish mob assaults and lynching.

Laws to tackle the menace of Mob Lynching:

The statement of objects and reasons of the Bill referred to a Supreme Court judgment dated July 17, 2018 in the case of Tehseen S. Poonawalla vs Union of India, and said the legislation was an attempt to nip the evil in the bud and to prevent spreading of hatred or incidents of mob lynching. Centre and other State governments must bring in similar legislations.

Amended Motor Vehicles Act is likely to be implemented from September 1.

President Ram Nath Kovind has given assent to the Motor Vehicles (Amendment) Act, 2019, that aims to make Indian roads safer, reduce corruption and use technology to overhaul the country’s transportation system.

With just over two months before the deadline to leave the European Union, British Prime Minister Boris Johnson has made a dramatic move by asking Queen Elizabeth II to suspend Parliament. The queen has approved his request.

What does it mean for Brexit?

India and Pakistan are expected to participate in the Foreign Minister-level meeting of the South Asian Association for Regional Cooperation (SAARC) in New York on September 26, 2019.

India’s gross domestic product (GDP) growth rate slowed to a six-year low of 5% in the first quarter of the 2019-20 financial year, the government announced. 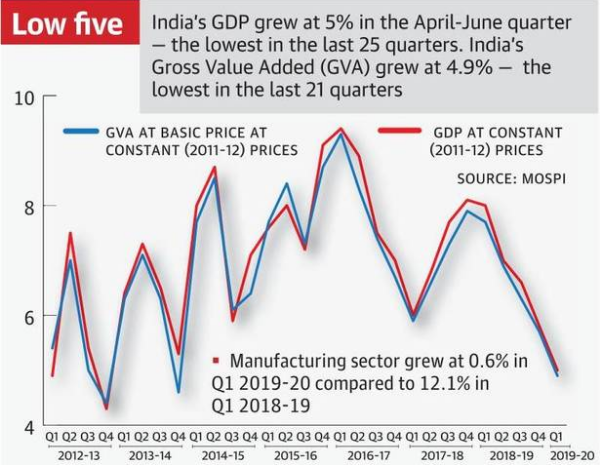 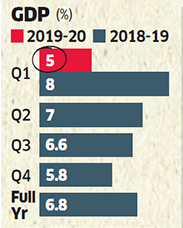 Together with steps taken by the government for the banks and the financial sector, and structural reforms, investment should continue improving and drive economy to higher growth.

Finance Minister Nirmala Sitharaman has laid out the broad strokes for the recapitalisation plan for public sector banks, providing the approximate allocation breakup for about Rs.55,000 crore of the Rs.70,000 crore promised in the Budget. 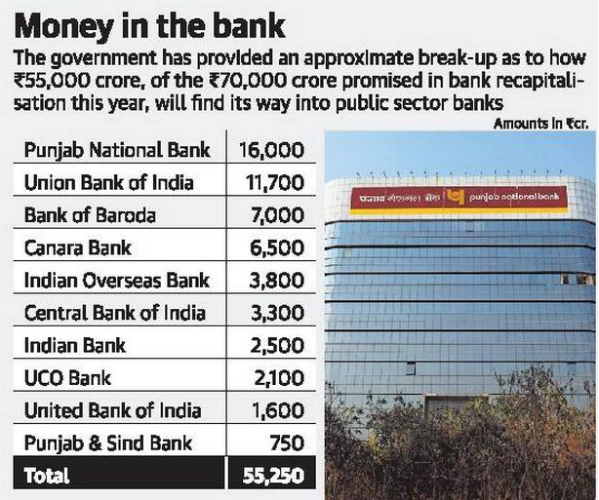 Experts have warned that given the weak credit demand from corporates and the lingering NBFC crisis, the upfront recapitalisation will not deliver on the key objectives of higher lending and recovery in their fortunes.

Finance Minister Nirmala Sitharaman has announced the merger of 10 public sector banks into four entities as an effort to revive the economy.

Details of the Bank Merger:

What were the Criteria for Selection of Banks?

Factors that will determine the Success of Mergers:

Positive Outcomes of the Move:

Other Reforms announced along with the Merger:

The definition of global banks is not only about the size but also about the professionalism in its governance. The government will have to promptly manage the implementation and outcome of four simultaneous mergers which may disrupt the industry.

1. Question of Human Rights and Liberalism

What are the Different Kinds of Liberalism?

Governments across the world and civil society need to uphold basic human rights, including that of minority communities. The ideology and political agenda followed by the ruling governments should not undermine the greater objective of human rights.

Manipur became the first to pass a remarkable law against lynching, by passing the act in December 2018. The Protection from Lynching Bill, 2019, made Rajasthan the second State, after Manipur, to introduce a law to tackle the social menace.

Statement 1 and 3 are correct. Afghanistan was the last country to join SAARC as a member in 2007.

The Prompt Corrective Action (PCA)  is triggered by RBI when banks breach certain regulatory requirements like minimum capital, return on asset and quantum of non-performing assets. PCA is intended to achieve – to intervene early and take corrective measures in a timely manner, so as to restore the financial health of banks.