1. Step by step Nirmala’s maiden Budget is all about incremental measures

2. Aadhaar can be interchanged with PAN for filing tax returns

In a bid to make tax filing easier, the Budget proposed making Aadhaar interchangeable with PAN for tax filing.

To encourage start-ups, Finance Minister announced a series of measures for the sector, including easing of the much-debated angle tax.

The government is estimating a fiscal deficit of 3.3% of GDP in financial year 2019-20. 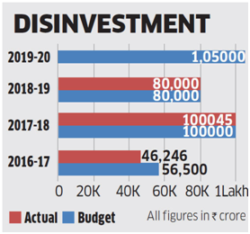 Multiple measures have been announced in the budget -2019 to further promote digital payments.

9. A shot in the arm for struggling MSMEs

Struggling Micro, Small and Medium Enterprises (MSMEs) have got a boost of 2% interest subvention scheme in the recently announced Union Budget.

Scheme of Fund for Upgradation and Regeneration of Traditional Industries (SFURTI):

During the budget speech 2019, the Finance Minister suggested that farmers take up zero-budget farming.

What is Zero Budget Farming? 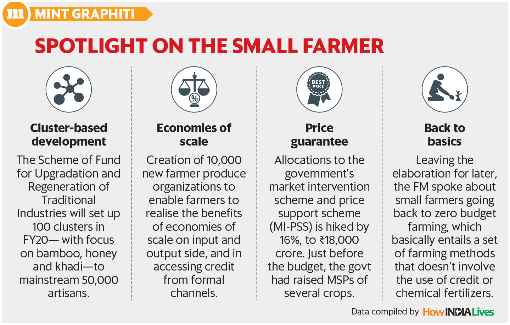 11. KYC norms for FPIs to be investor-friendly

All possible steps are being taken by the government to encourage more foreign investment in the Indian capital markets by making it easier for such investors to come to India and invest in a hassle-free manner.

12. New package in the offing to ensure power for all

It was announced in the budget that a power sector package is likely to be introduced soon, along with a new tariff policy to ensure uninterrupted power for all.

1. Bucks for the banks

Some Notable Takeaways from the Budget:

(b)   Other Key Initiatives:

Initiatives arising out of the ‘nudge theory’:

Looking into the idea of providing a macroeconomic stimulus:

(a)    Perspective on Schemes:

(b)   Promotion of stimulus in other sectors:

(d)   Looking at other facets of the economy:

(f)    Looking at expenditure and deficits:

Source of additional revenue projected in the Budget:

A Noteworthy reform measure in the Budget:

Looking at the reform front:

GHI was initially published by the International Food Policy Research Institute (IFPRI) and Welthungerhilfe. In 2007, the Irish NGO Concern Worldwide also became a co-publisher. In 2018, the GHI was a joint project of Welthungerhilfe and Concern Worldwide, with IFPRI stepping aside from its involvement in the report. The GHI ranks countries based on four key indicators — undernourishment, child mortality, child wasting and child stunting.