What does the Bill say?

Why are the States against it?

Why is the Union government introducing the Bill now?

The National Tiger Estimation (Tiger census), made public shows that India has 2,967 tigers, a third more than in 2014. 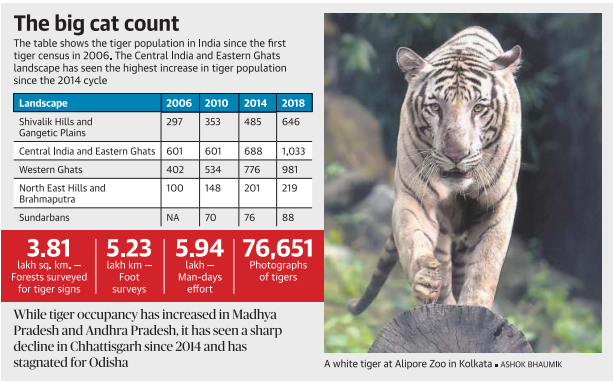 A number of government initiatives to streamline tiger conservation – including a ban on hunting and awareness drives in villages -are said to be behind the increase of the population. A strict wildlife protection law implemented in 1972 made it virtually illegal to kill or capture wild animals even when “problem animals” were involved in severe conflict situations. Under pressure from global conservationists, India also upped investments to hire more forest guards and improve protection of reserves.

India is now estimated to be home to around 70% of the world’s tigers. India has achieved a historic milestone. Nine years ago it was decided in St. Petersburg that the target of doubling the tiger population would be 2022, India has completed the target 4 years earlier.

The rasagola, a popular dessert of Odisha, has received the geographical indication tag from the Registrar of Geographical Indication after years of controversy around the sweet.

What was the controversy?

What is Geographical Indication Tag?

The Rajya Sabha passed an amended version of the three-year-old Insolvency and Bankruptcy Code (IBC).

Rajya Sabha has passed the Banning of Unregulated Deposit Schemes Bill, 2019, which seeks to put in place a mechanism by which poor depositors will get back their hard-earned money.

1. A straightforward lesson on resolution – On Kashmir Conflict

The editorial suggests why India and Pakistan should peacefully settle the Kashmir issue through bilateral dialogue.

Why is third party mediation not a good idea?

Need for India-Pakistan to resolve the Kashmir Issue bilaterally:

Concerns raised by the attack:

Presence of Insurgents in Afghanistan:

Weakness of the Afghanistan Government:

Mistakes done by the U.S.A?

What is the way ahead?

1. In Assam, basic dignity at stake

The plight of the stateless:

2. All schools, colleges in Mizoram to have nutrition gardens

4. About 50 health facilities get closure notice

1. The Trade Record Analysis of Flora and Fauna in Commerce (TRAFFIC)

The first product in India to be accorded with GI tag was Darjeeling tea in the year 2004-05. The first Odia product to receive a GI tag was Kandhamal Haldi, a type of turmeric produced by tribal farmers in the state’s Kandhamal district.