Following the protests in Tamil Nadu, Karnataka, West Bengal and Maharashtra, the Human Resource Development has revised draft of the National Education Policy.

While dealing with a contempt case registered on the basis of reference received from the Principal Registrar of Central Administrative Tribunal (CAT), the Delhi High Court has held that the CAT, which adjudicates service matters, can exercise the same jurisdiction and powers, as a High Court, in respect of its contempt proceedings.

Reversing his predecessor’s orders, Andhra Prdesh Chief Minister Y. S. Jagan Mohan Reddy has allowed the Central Bureau of Investigation (CBI) to go ahead with investigations and raids in the State without prior permission of the State government.

It effectively means the CBI can now enter the State without obtaining permission from the Andhra Pradesh government.

Does withdrawal of General Consent mean that the CBI can no longer probe any case in the two states?

The Bombay High Court has upheld the constitutional validity of a section of the Indian Penal Code (IPC) under which life imprisonment or death penalty can be awarded to repeat offenders in rape cases. 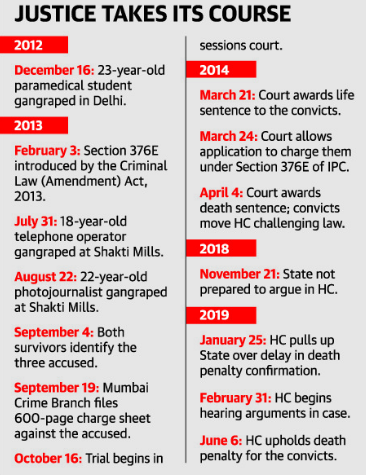 With the dismissal of the petitions, another Bench of the High Court will now take up for final hearing appeals filed by the convicts challenging their conviction and death penalty.

Nilekani panel has set a target for the government and regulators to achieve a ten-fold volume growth in digital payments over the next three years through customer-friendly pricing mechanisms and broadening access infrastructure.

1. A rocky road for strategic partners

U.S.A’s recent decisions stand in sharp contrast to the first year of the Trump administration when it was actively wooing India as a strategic counterweight to China and because of its rapidly expanding market that was seen as providing great opportunities for American business. The editorial talks about the effects of recent decisions taken by the U.S. on India.

The Trump administration seems to have reversed course in recent months. U.S. unilateral actions on three fronts have simultaneously demonstrated what amounts to downgrading India in American strategy.

1 – End to the waiver on import of oil from Iran:

2 – U.S. threat to impose sanctions on India if it buys the S-400 missile defence system from Russia

3 – U.S decision to stop access to preferential trade terms to India under the its Generalised System of Preferences (GSP) programme.

1. The sum and substance of the jobs data

The report from the Periodic Labour Force Survey (PLFS) is out, garnering a lot of attention based on selective reading of tables and spurring partisan debates. This was the first time that the NSSO conducted the Periodic Labour Force Survey, which is an annual survey mapping unemployment to provide a closer trace of unemployment. The earlier five-yearly surveys used to come with a lag of over one or two years, thus reducing the possibility of timely analysis.

Following an outcry from political leaders in Tamil Nadu, a State that is quite sensitive to any hint of ‘Hindi imposition’ by the Centre, the draft of the National Education Policy has been revised. The revised draft retains the recommendation to introduce a three-language formula from Class 1, merely having removed the clause stipulating the specific languages that students must choose.

3. ‘UdChalo’ to give a new lease of life to wounded soldiers

Sashastra Seema Bal is currently under the administrative control of the Ministry of Home Affairs (MHA).

Core inflation is the change in costs of goods and services, but does not include those from the food and energy sectors. This measure of inflation excludes these items because their prices are much more volatile.

The Montreux Record is a register of wetland sites on the List of Ramsar wetlands of international importance where changes in ecological character have occurred, are occurring, or are likely to occur as a result of technological developments, pollution or other human interference. Loktak Lake and Keoladeo National Park are listed under Montreux Record.

Solar Radiation Management, also popularly known as Solar Geo-Engineering is a process through which the reflectivity (albedo) of the Earth’s atmosphere or surface is increased, in an attempt to offset some of the effects of GHG-induced climate change. The technique mimics big volcanic eruptions that can cool the Earth by masking the sun with a veil of ash or similar other things.