Indian Prime Minister Narendra Modi and the President of China Xi Jinping met in Bishkek, on the side-lines of the Shanghai Cooperation Organisation (SCO) summit.

2. U.S. open to talks on GSP with India, says Pompeo

U.S. Secretary of State has hinted that it is possible to reinstate the Generalized System of Preferences (GSP) for India.

Impact on the U.S:

3. Netanyahu thanks Modi for vote against Palestinian group

Prime Minister of Israel Benjamin Netanyahu has thanked Mr. Narendra Modi for voting in favour of a decision introduced by the Jewish state that objected to granting consultative status to a Palestinian group at the UN’s Economic and Social Council (ECOSOC).

Starting July 1, both employee’s and employer’s contribution under the Employees’ State Insurance (ESI) Act, which gives insured workers medical benefits among other facilities, would be reduced, the Centre said.

Benefits of the move: 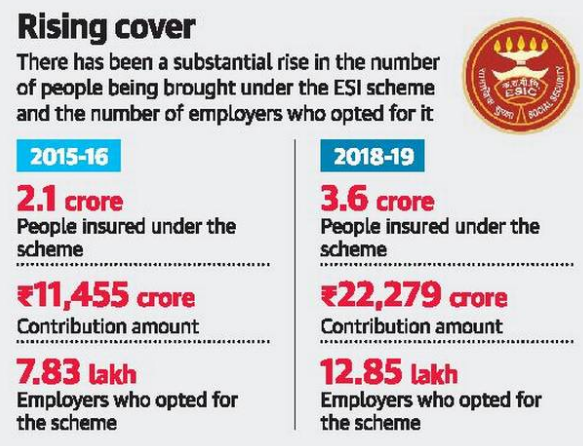 However, a member of the Employees’ State Insurance Corporation’s Standing Committee and a representative of the RSS-affiliated Bharatiya Mazdoor Sangh opined that the reduction in contribution rates was a reason for concern.

1. India will have its own space station, says ISRO chief Sivan

Chairman of the Indian Space Research Organisation (ISRO), announced that India plans to have its own space station, and modalities for it would be worked out after Gaganyaan – the first manned mission.

Significance of the discovery:

What do the protestors think?

A Look at the numbers:

A Look at a few more specifics:

A Look at the Issue being analyzed:

A Perspective on the current school-leaving examination:

(a)   Examination System: A barrier more than an enabler?

(b) An illusion of equal opportunity?

India’s exam system in comparison with the systems of other countries:

Model answers coming in the way of students creatively answering an exam question.

(a) How it affects the process?

Looking at the draft National Education Policy 2019: Shifting to modular exams- Is this actual reform?

The Asian golden cat is a wild cat native to the North-Eastern Indian subcontinent and Southeast Asia. It is found across eastern Nepal through north-eastern India to Indonesia. Conservation status as per IUCN Red List of threatened species: near threatened.

Insurance Regulatory and Development Authority of India (IRDAI) is an apex regulatory body involved in regulating and developing the insurance and reinsurance industry in India. It was constituted as a statutory body as per the provisions of Insurance Regulatory and Development Authority Act 1999. The body was created on the recommendations of the Malhotra Committee Report.  All the companies wanting to run the insurance business in India are to be registered with the IRDAI. IRDAI is headquartered in Hyderabad, Telangana.

Indian Council Act of 1909 also popularly known as Morley-Monto Reform introduced separate electorates on the basis of religion. Therefore Lord Minto came to be known as Father of Communal Electorate in India.