A nationwide strike has been called for, by the Indian Medical Association, protesting the attack on a doctor in Kolkata by the relatives of a patient who died.

2. Metro man Sreedharan against free rides for women in Capital

The Delhi government has announced the formation of a task force to ensure the safety of female commuters aboard public transport. The announcement follows the proposal to make Metro travel and bus travel free for women in the capital.

The Commerce Ministry has said that India has decided to impose retaliatory tariffs on 29 goods imported from the U.S. starting June 16. The decision comes a year after it was initially decided. 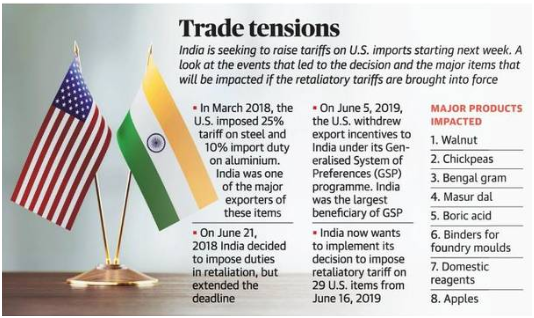 Shanghai Cooperation Organisation Summit 2019 is being held in Bishkek, capital of Kyrgyzstan.

The Regional Antiterrorism Structure (RATS) was established in the year 2004 at the Tashkent Summit. SCO-RATS is a permanent body established to bring about coordination and interaction between member states in ensuring security in the region. The Regional Antiterrorism Structure works on information sharing and joint counter terrorism measures between the member states. Post the Astana summit declaration of 2005, Shanghai Cooperation Organisation has emerged as a regional security organization.

3. PM hits out at trade protectionism

A Perspective on the capabilities of young children:

(a) What plagues the teaching and learning of early literacy in many Indian classrooms?

(b) A Look at the many pedagogical approaches:

(c) The Onus on Teachers:

2. Reversing the scale of priorities

What did the petitioners say?

What did the government say?

Emergence and Relevance of Sustainable development:

What do such utilitarian reckonings hold in store?

Primacy to the environment:

What does SEBI’s approach suggest?

Systematic Voters’ Education and Electoral Participation program, better known as SVEEP, is the flagship program of the Election Commission of India.

PKVY aims at supporting and promoting organic farming, reduction in dependence on fertilizers and agricultural chemicals, in turn, resulting in improvement of the soil health while increasing the yields.  The government of India came up with Paramparagat Krishi Vikas Yojana in order to boost organic farming, particularly in Northeast India. Women Self Help Groups are also being encouraged by the government to take up organic farming in clusters under National Rural Livelihood Programme.

NASA’s Voyager 2 is the second human-made object in history to exit the Heliosphere (bubble created by solar winds). Voyager 1, crossed this boundary in 2012. Voyager 2 is the only spacecraft to have visited all four gas giant planets — Jupiter, Saturn, Uranus and Neptune — and discovered 16 moons, as well as phenomena like Neptune’s mysteriously transient Great Dark Spot, the cracks in Europa’s ice shell, and ring features at every planet. The Voyager mission was launched in the 1970’s, and the probes sent by NASA were only meant to explore the outer planets – but they just kept on going.