With a decline in its population, the Parsi community is innovating to save its age-old traditions.

Memory of The World Prgramme: Washington has warned that Chinese-made drones could be giving spy agencies in Beijing unrestricted access to stolen data, according to a report in American media.

The Indian Coast Guard (ICG) seized heroin estimated to be worth between Rs. 800 and Rs. 1,000 crore in the international market from a Pakistani fishing vessel off the Gujarat coast. 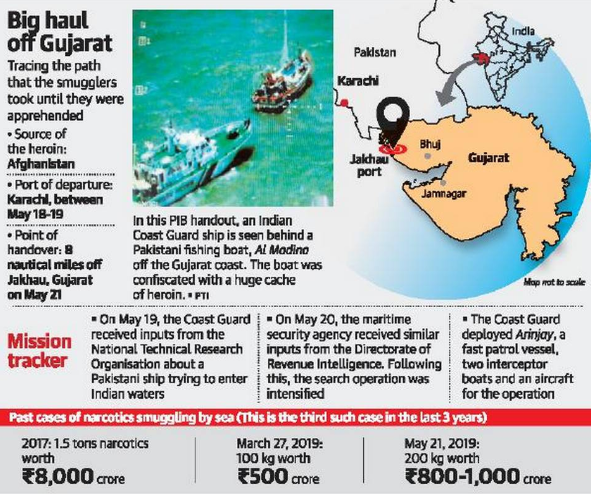 Haryana Chief Minister said the government has decided to discourage paddy crop sowing as the State was staring at a water crisis due to depleting groundwater level.

Crop diversification is need of the day for the State as it saves water, electricity and improves soil health.

The United Nations (UN) has lowered its forecast for India’s GDP growth in 2019-20 to 7.1% from its estimate in January of 7.5% citing an overall slowdown in global growth.

The Reserve Bank of India’s Central Board has decided to create a specialised supervisory and regulatory cadre.

A land of remarkable diversity:

A Look into Specifics:

What did India say in its objections?

2. The aftermath of a nasty election

The redeeming feature of the election process:

A look at some of the fissures:

What is the damage done to the future of India?

The need for constructive discourse:

The role for civil society:

1. All for a gur cause: Muzaffarnagar to host jaggery fest

Jakhau Port is famous fishing port of Gujarat, where the fishing communities from almost all of the Gujarat Coast migrate during the eight months fishing season. Jakhau remained an important port till a new port at Mandvi was opened in the 16th century. The port traffic of Jakhau was then lost to Mandvi.