A carbocation is a molecule in which a carbon atom has a positive charge and three bonds. We can basically say that they are carbon cations. Formerly, it was known as carbonium ion. Carbocation today is defined as any even-electron cation that possesses a significant positive charge on the carbon atom.

Talking about some general characteristics, the carbon cations are very reactive and unstable due to an incomplete octet. In simple words, carbocations do not have eight electrons, therefore they do not satisfy the octet rule.

In carbocation, the hybridization of carbon will be sp2 and its shape is trigonal planar. There is also a vacant p orbital which indicates its electron-deficient nature. The carbon has 6 electrons in its valence shell. Due to this, it is an electron-deficient species, also known as an electrophile.

A carbocation is generally observed in an SN1 reaction, elimination reaction, etc. 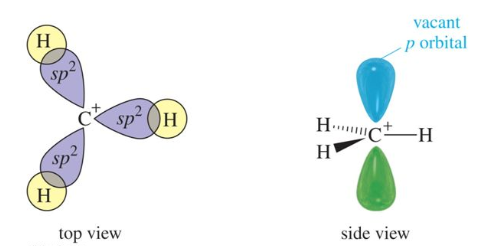 The different carbocations are named on the basis of the number of carbon groups bonded to the carbon. The carbocation can be termed as methyl, primary, secondary or tertiary on the basis of how many carbon atoms are attached to it:

Interestingly, in addition to these types, there is another type of carbocation which is known as pyramidal carbocation. In this type, the ions consist of a single carbon atom that usually tends to hover over a four- or five-sided polygon which can be depicted as a pyramid. The 4 sided pyramidal ion will consist of +1 charge while the five-sided pyramid will have +2 charge.

Formation of the Carbocation

The carbocations can be formed by either of the following two fundamental steps:

Cleavage of Bond of Carbon

Whenever there is a cleavage of the bond of carbon and atoms attached to it, the leaving group takes away the shared electrons. Thus leaving the carbon atom as electron deficient. As a result, a positive charge is developed forming a carbocation. The more tendency of cleavage of bond or formation of a more stable carbocation the lower is the activation energy.

In many organic reactions such as the SN1 and E1 reactions, carbocation is formed as a reaction intermediate.

The stability of a carbocation can be achieved by the following processes:

(a) Addition of a nucleophile.

(b) Formation of a pi bond.

Addition of a Nucleophile

Formation of a Pi Bond

The carbocation can receive electrons from nearby hydrogen to remove its positive charge and to complete its octet. Thus a new pi bond can be formed. The hydrogen atom is generally must be removed by any base. Due to the high reactivity of the carbocations even a weak base such as water or iodide ion are able to facilitate the deprotonation. Whenever such deprotonation occurs two types of products are formed. The more stable compound is the major product.

The different types of carbocation rearrangement are:

Here hydrogen is shifted from 1st carbon to 2nd carbon. So the carbocation has changed from primary to the secondary carbocation. Thus forming a more stable structure.

The entire phenyl group can also be shifted to obtain a more stable secondary or tertiary carbocation than a primary carbocation. This is also interesting to know that a phenyl shift is more favoured than a methyl shift.

The stability order of carbocation is as follows:

The stability of carbocations depends on the following factors:

The Carbocation stability depends on the number of carbon groups attached to the carbon carrying the positive charge.

1. Identify the most stable carbocation from the following?

Explanation: It is more stable because it is a tertiary carbocation.

Carbon at a primary position

Carbon at a secondary position

Now at which position incoming hydrogen would be added?

Answer: Carbon at the primary position

Explanation: Hydrogen will be added to the primary position because it results in the formation of a more stable secondary carbocation.

Explanation: In II compound the lone pair of oxygen helps in the stabilization of the carbocation. Compound I has better hyperconjugation than compound III

4. Which of the following carbocation is the most stable?

So the charge on the carbocation can have resonance with two phenyl groups. Thus, maximum stability.

5. Which of the following is most stable?

6. Arrange these carbocations on the basis of increasing order of their stability.

What is carbocation and how is it formed?

A carbocation is an organic reactive intermediate that is formed due to the incomplete valency of the carbon atom. The valency of carbon is four. Loss of one electron results in the formation of a carbocation. For example, CH3+ is a methyl carbocation.

Explain the stability of 3°, 2° and 1° carbocation and arrange them in decreasing order of their stability.

What is the geometry and bond angle of carbocation?

Carbocation is trigonal planar and has a bond angle of 120°.

The rate of which reaction mechanism depends on the formation of carbocation?

The rate of SN1 (Substitution Nucleophilic First Order) reaction depends on the formation and stability of carbocation.

Wagner-Meerwein rearrangement is a rearrangement reaction in which a carbocation cation intermediate is formed.
Test your knowledge on Carbocation
Q5