Hybridization of Carbon – Carbon is one of the important and most common chemical element that is essential for organic connections. Carbon atoms usually form bonds by mixing different orbitals and can contribute to the formation of different structures and properties.

Interestingly, when we talk about the hybridization of carbon, there are several types. Most of the time the s and p orbitals of the second shell in carbon combine together during hybridization. In essence, carbon can use different hybridization to form different compounds.

Types of Hybridization in Carbon

Below we will understand the different types of hybridization of carbon. 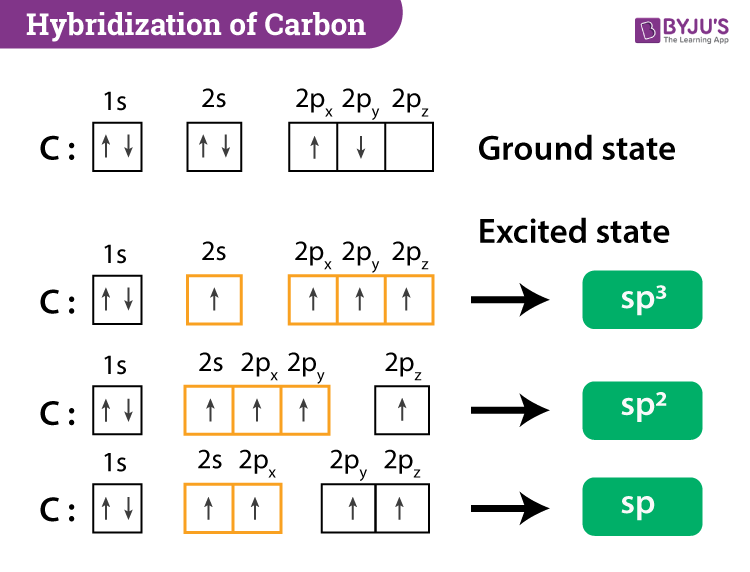 Carbon can have an sp hybridization when it is bound to two other atoms with the help of two double bonds or one single and one triple bond. When the hybridization occurs the molecules have a linear arrangement of the atoms with a bond angle of 180°.

A carbon atom is sp2 hybridized when bonding takes place between 1 s-orbital with two p orbitals. There is a formation of two single bonds and one double bond between three atoms. The hybrid orbitals are placed in a triangular arrangement with 120° angles between bonds.

When the carbon atom is bonded to four other atoms the hybridization is said to be sp3 type. Here 1 s orbital and 3 p orbitals in the same shell of an atom combine to form four new equivalent orbitals. The arrangement is tetrahedral with a bond angle of 109.5o.