In Ammonia (NH3) or to be more precise the central atom in ammonia which is nitrogen is sp3 hybridized. Here we will look at how to determine the hybridization of NH3.

What is the Hybridization of Ammonia?

To understand the hybridization of ammonia we have to carefully examine the areas around NItrogen. If we look at the atomic number of nitrogen it is 7 and if we consider its ground state it is given as 1s2, 2s2,2p3.

During the formation of ammonia, one 2s orbital and three 2p orbitals of nitrogen combine to form four hybrid orbitals having equivalent energy which is then considered as an sp3 type of hybridization.

Further, if we look at the NH3 molecule, you will notice that the three half-filled sp3 orbitals of nitrogen form bonds to hydrogen’s three atoms. However, the fourth sp3 orbital that is present is a nonbonding pair of hybridized orbital and is normally used for holding the lone pair. 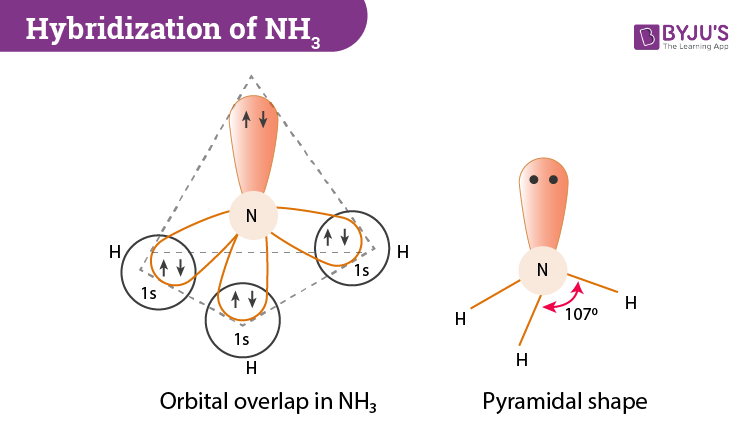 If we look at the molecular geometry of ammonia it has a trigonal pyramidal or distorted tetrahedral structure. This is mainly due to the presence of a lone non-bonding pair which usually exerts greater repulsion on the bonding orbitals. In all this, nitrogen lies at the centre, three hydrogen atoms which are identical create the base and one pair of electrons forms the apex of the pyramid.

Test your knowledge on Hybridization Of Nh3
Q5