A sphere is defined as a completely round geometrical object in a three-dimensional space just like a round ball. To be geometrical, a sphere is a set of points that are equidistant from a point in space. The distance between the outer point and centre of the sphere is called the radius, denoted by r and the maximum straight distance between any two sides of the sphere through the centre is known as the diameter, denoted by d. 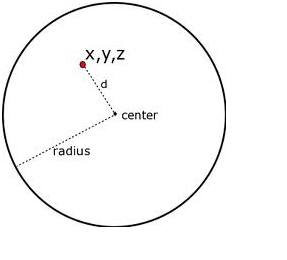 How to Derive the Equation of a Sphere?

The equation of a circle of radius r is given by:

You can relate it to the algebraic method of starting the Pythagoras theorem.

The point (x,y) lies on the circle only when the right triangle has sides of length |x| and |y| and hypotenuse of length r, which can be written as:

Pythagoras theorem can be used twice for the equation of a sphere. In the below figure, O is the origin and P(x,y,z) is a point in three-space. P is on the sphere with radius r only when the distance from O to P is r. 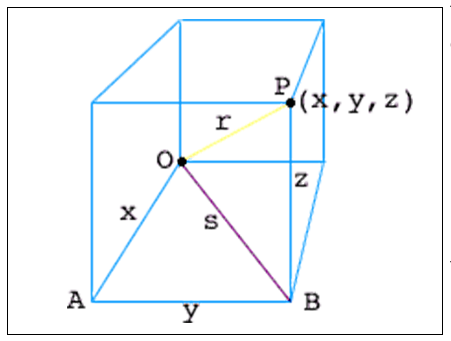 Since OAB is a right angle triangle, x2 + y2 = s2. The triangle OBP is another right triangle and therefore, s2 + z2 = r2. Hence, the distance between O and P can be expressed by:

Hence, we can conclude that (x,y,z) lies on the sphere with radius r only if,

which is called the equation of a sphere.

Volume of a Sphere Equation

The formula to calculate the volume of a sphere is given by the equation:

The volume of the sphere =

Where r is the radius of the sphere.

Surface Area of a Sphere Equation

The formula to calculate the surface area of the sphere is given by:

The Surface area of the sphere=

Equation of a Sphere Example

Write the equation of the sphere in the standard form where the centre and radius of the sphere are given as (11, 8, -5) and 5 cm respectively.]

We know that the equation of the sphere in the standard form is written as:

Now, substitute the given values in the above form, we get:

To know more about the properties of spheres and along with operations and problems, you can visit BYJU’S – The Learning App.

Test your Knowledge on Equation Of Sphere
Q5