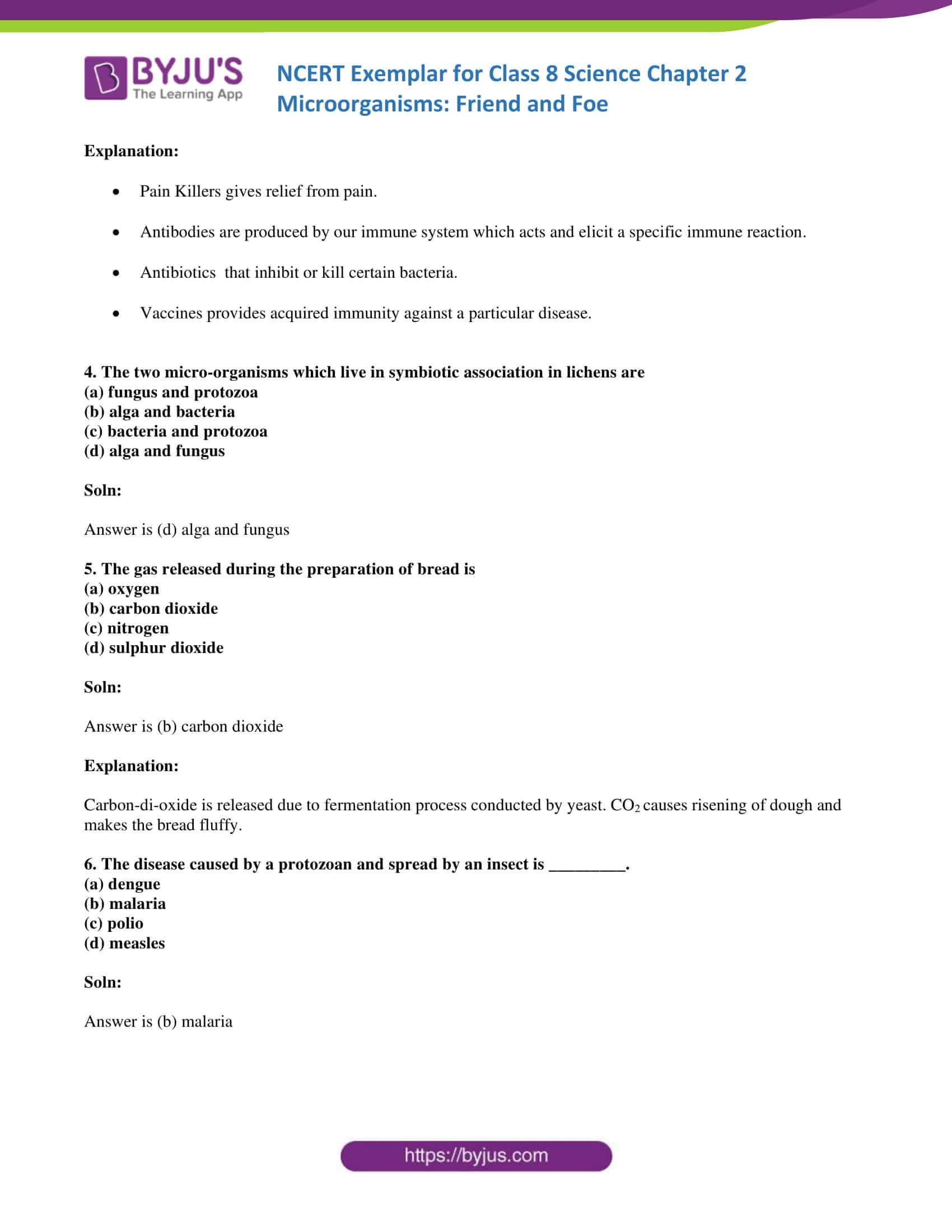 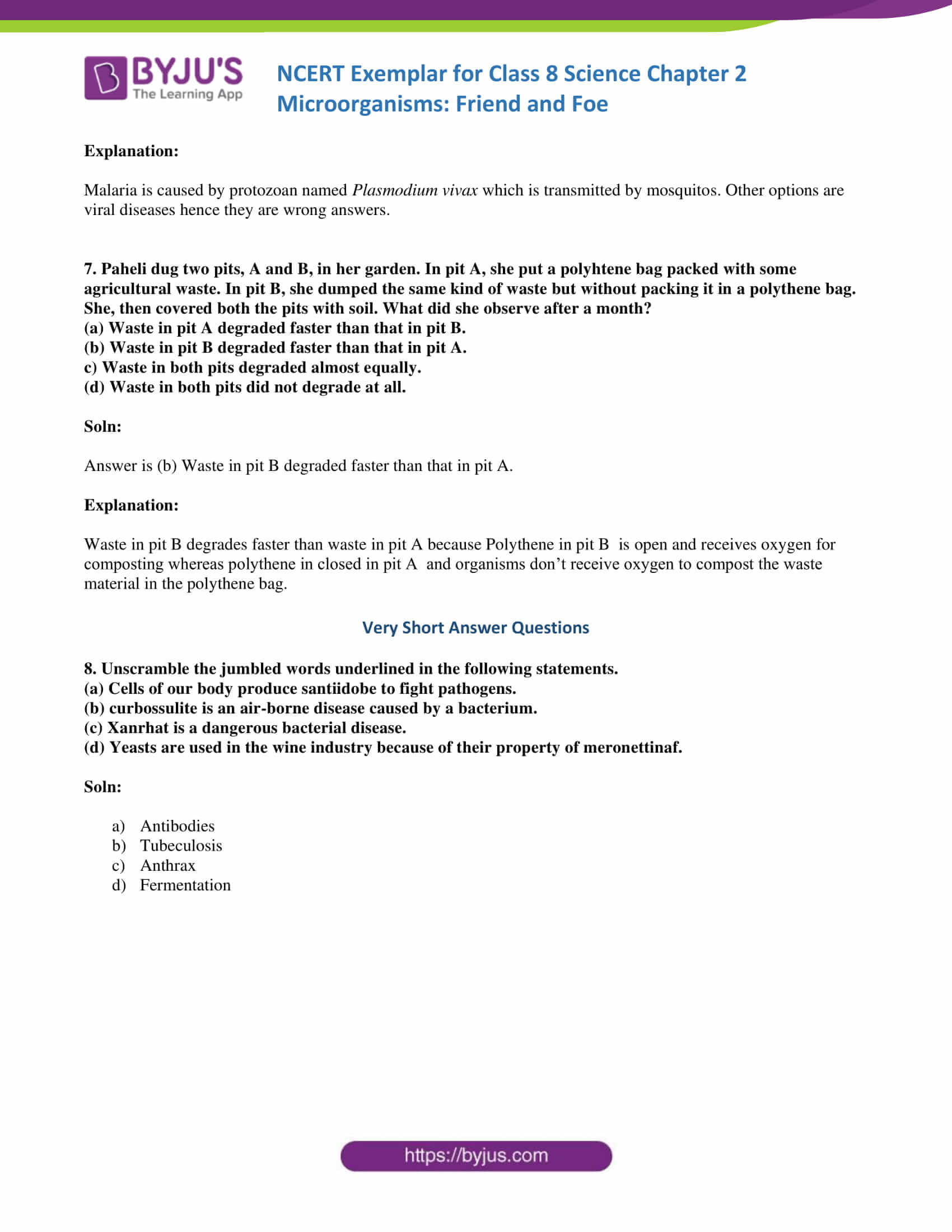 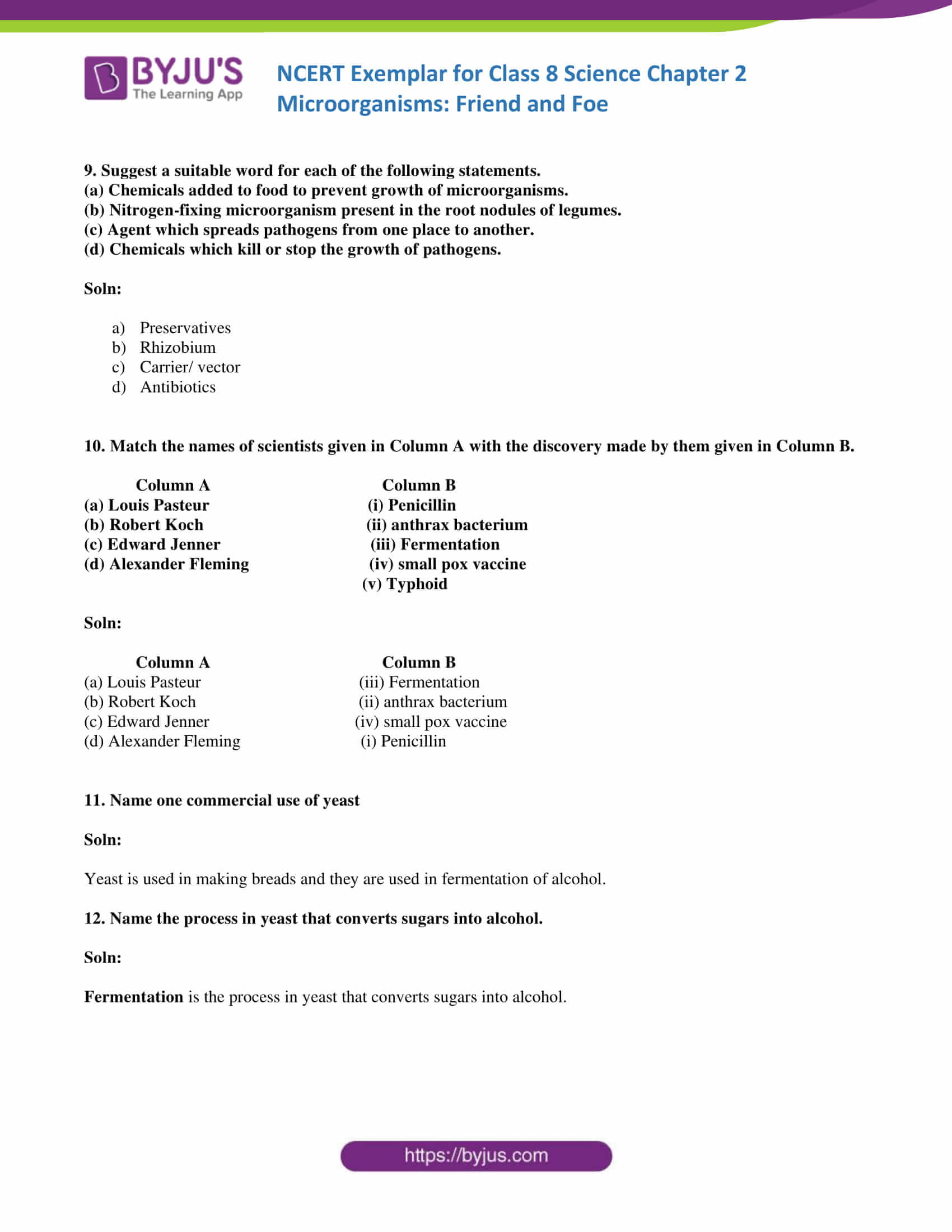 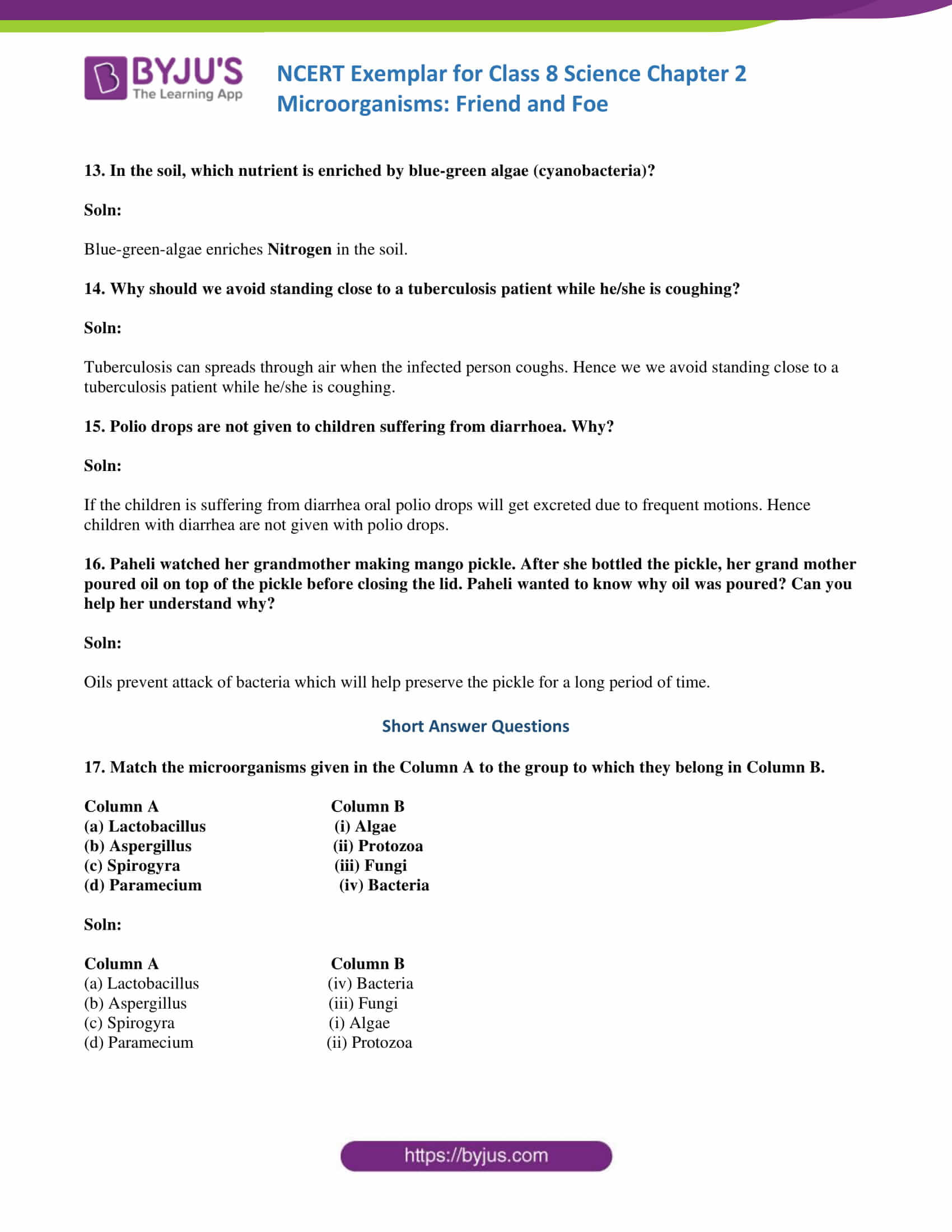 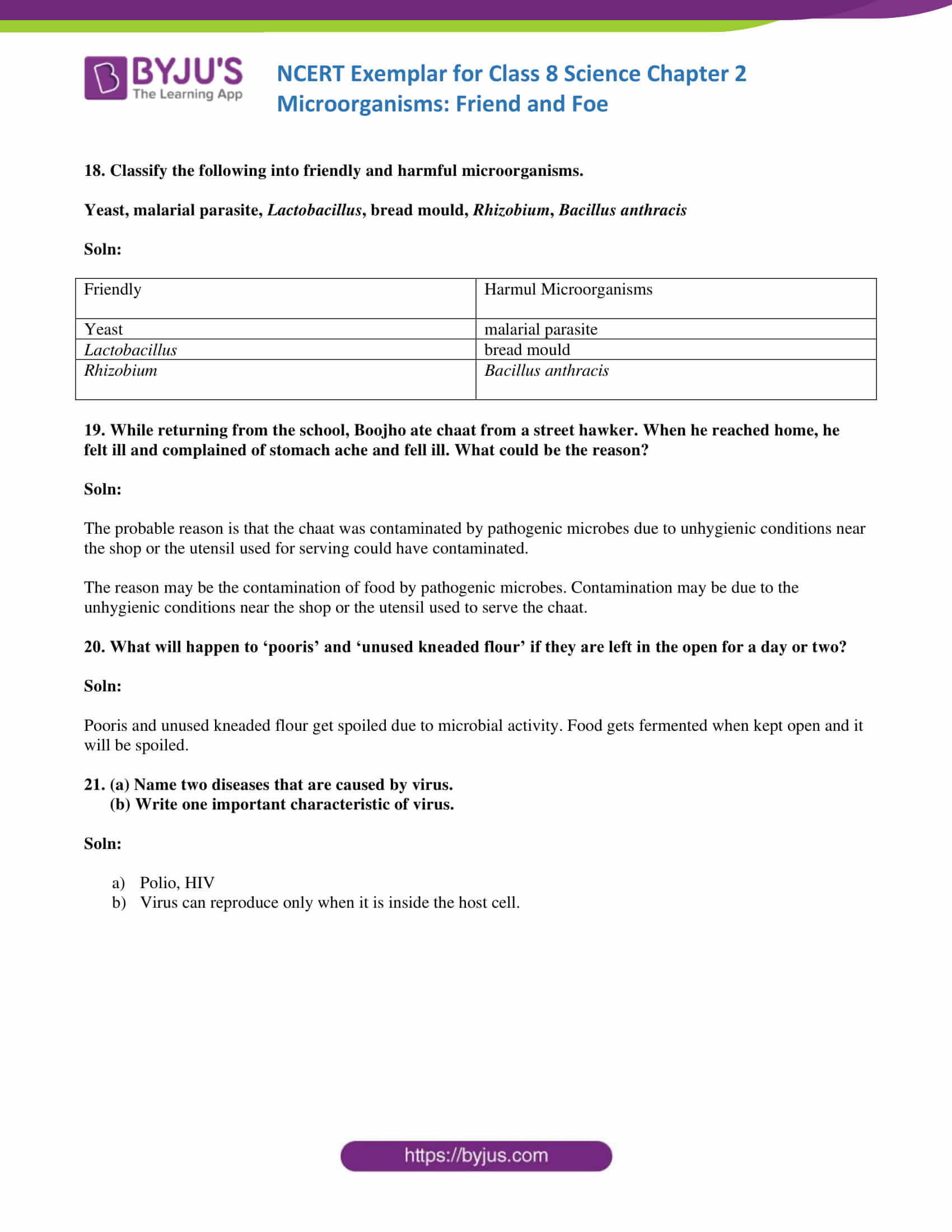 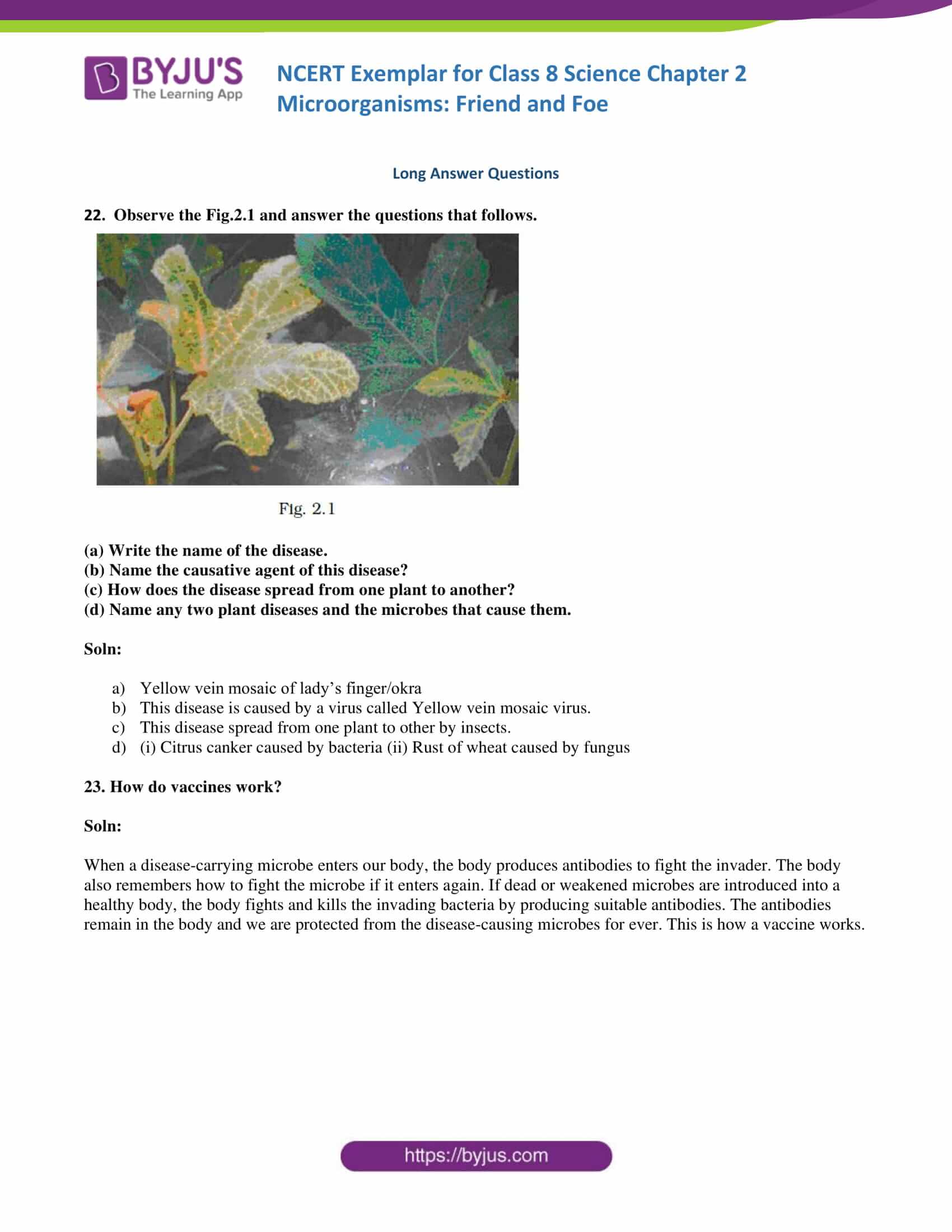 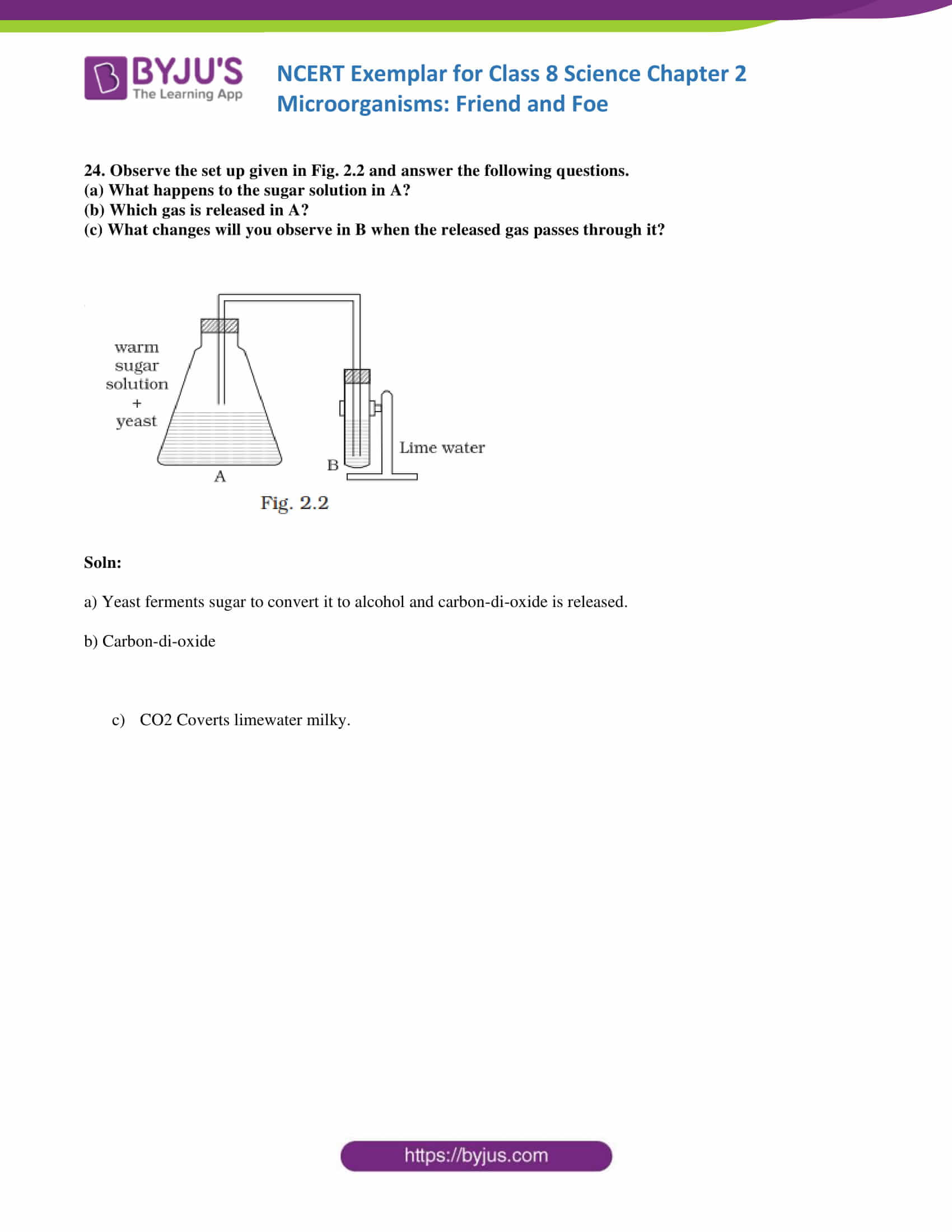 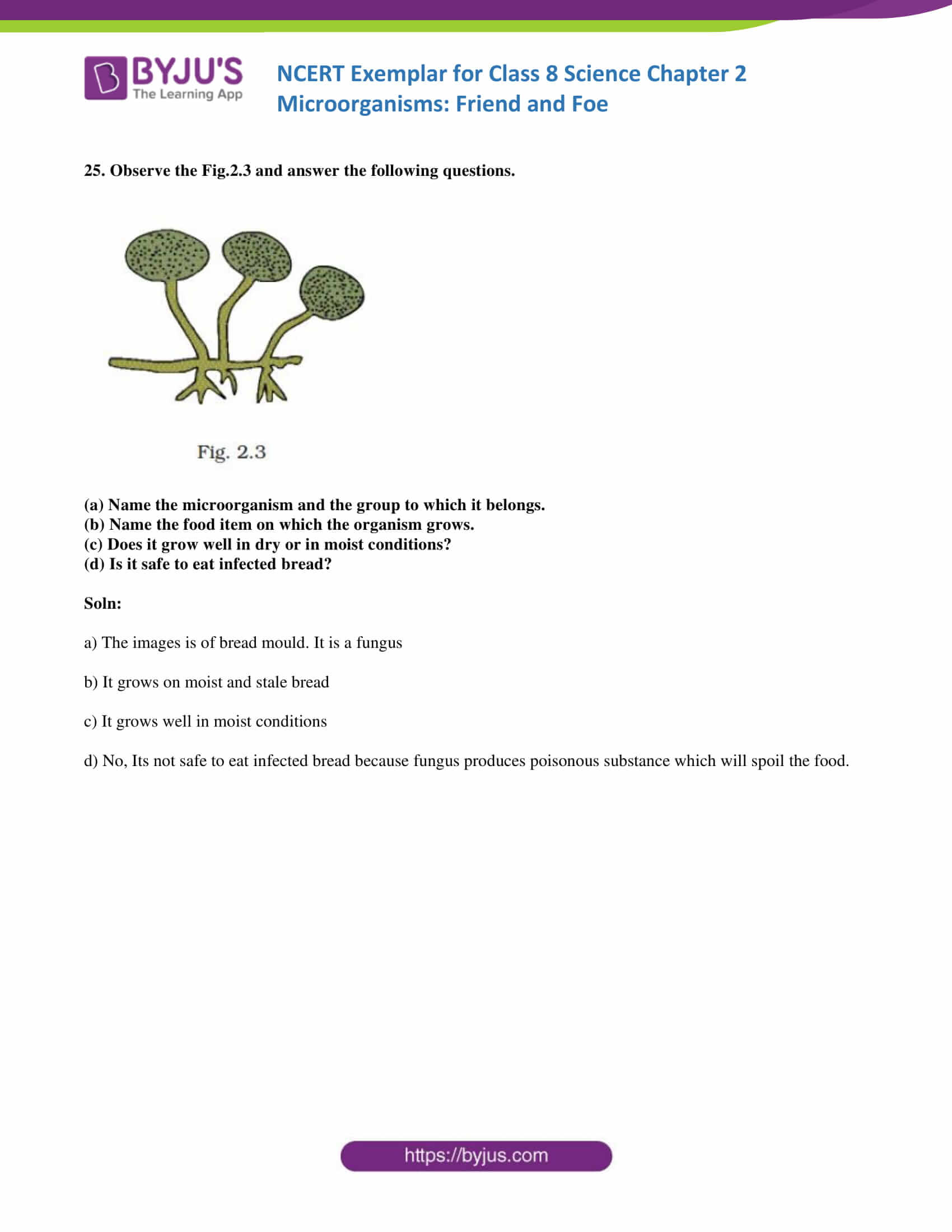 1. Which of the following reproduces only inside a host cell?

The answer is (b) Virus

The virus is considered as intermediate between living and non-living. Outside a host-virus remains inactive. It can perform its life processes and reproduction only when it is inside a host cell.

The answer is (b) Influenza

Dysentry is caused by an amoeba which is a protozoan.

The answer is (b) Antibiotics

4. The two micro-organisms which live in symbiotic association in lichens are

(a) Fungus and Protozoa

(b) Alga and Bacteria

The answer is (d) Alga and Fungus

5. The gas released during the preparation of bread is

The answer is (b) Carbon dioxide

Carbon-di-oxide is released due to the fermentation process conducted by yeast. CO2 causes rising of the dough and make the bread fluffy.

The answer is (b) Malaria

Malaria is caused by protozoan named Plasmodium vivax which is transmitted by mosquitos. Other options are viral diseases hence they are wrong answers.

7. Paheli dug two pits, A and B, in her garden. In-pit A, she put a polythene bag packed with some agricultural waste. In-pit B, she dumped the same kind of a waste but without packing it in a polythene bag. She then covered both the pits with soil. What did she observe after a month?

(a) Waste in pit A degraded faster than that in pit B.

(b) Waste in pit B degraded faster than that in pit A.

(d) Waste in both pits did not degrade at all.

The answer is (b) Waste in pit B degraded faster than that in pit A.

Waste in pit B degrades faster than waste in pit A because Polythene in pit B is open and receives oxygen for composting whereas polythene in closed in pit A and organisms don’t receive oxygen to compost the waste material in the polythene bag.

8. Unscramble the jumbled words underlined in the following statements.

(a) Cells of our body produce santiidobe to fight pathogens.

(b) curbossulite is an air-borne disease caused by a bacterium.

(d) Yeasts are used in the wine industry because of their property of meronettinaf.

9. Suggest a suitable word for each of the following statements.

(a) Chemicals added to food to prevent the growth of microorganisms.

(b) Nitrogen-fixing microorganism present in the root nodules of legumes.

(c) The agent spreads pathogens from one place to another.

(d) Chemicals which kill or stop the growth of pathogens.

(a) Louis Pasteur – (i) Penicillin

11. Name one commercial use of yeast

Yeast is used in making bread and they are used in the fermentation of alcohol.

12. Name the process in yeast that converts sugars into alcohol.

Fermentation is the process in yeast that converts sugars into alcohol.

13. In the soil, which nutrient is enriched by blue-green algae (cyanobacteria)?

Blue-green-algae enriches Nitrogen in the soil.

14. Why should we avoid standing close to a tuberculosis patient while he/she is coughing?

Tuberculosis can spread through the air when the infected person coughs. Hence we avoid standing close to a tuberculosis patient while he/she is coughing.

15. Polio drops are not given to children suffering from diarrhoea. Why?

If the children are suffering from diarrhoea oral polio drops will get excreted due to frequent motions. Hence children with diarrhoea are not given with polio drops.

Oils prevent the attack of bacteria which will help preserve the pickle for a long period of time.

17. Match the microorganisms given in Column A to the group to which they belong in Column B.

18. Classify the following into friendly and harmful microorganisms.

19. While returning from the school, Boojho ate chaat from a street hawker. When he reached home, he felt ill and complained of stomach ache and fell ill. What could be the reason?

The probable reason is that the chaat was contaminated by pathogenic microbes due to unhygienic conditions near the shop or the utensil used for serving could have contaminated.

The reason may be the contamination of food by pathogenic microbes. Contamination may be due to the unhygienic conditions near the shop or the utensil used to serve the chaat.

20. What will happen to ‘pooris’ and ‘unused kneaded flour’ if they are left in the open for a day or two?

Pooris and unused kneaded flour get spoiled due to microbial activity. Food gets fermented when kept open and it will be spoiled.

21. (a) Name two diseases that are caused by the virus.

(b) Write one important characteristic of the virus.

b. A virus can reproduce only when it is inside the host cell.

22. Observe the Fig.2.1 and answer the questions that follow. 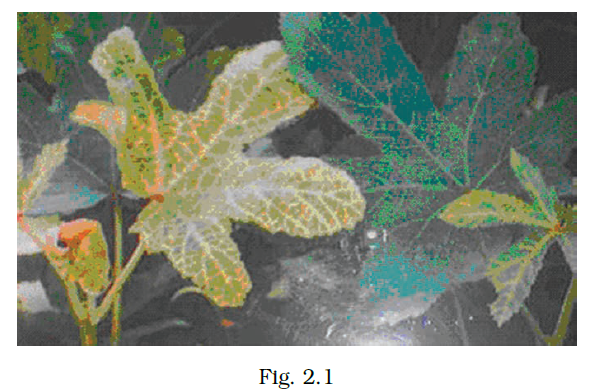 (a) Write the name of the disease.

(b) Name the causative agent of this disease?

(c) How does the disease spread from one plant to another?

(d) Name any two plant diseases and the microbes that cause them.

b. This disease is caused by a virus called Yellow vein mosaic virus.

c. This disease spread from one plant to another by insects.

d. (i) Citrus canker caused by bacteria (ii) Rust of wheat caused by the fungus

When a disease-carrying microbe enters our body, the body produces antibodies to fight the invader. The body also remembers how to fight the microbe if it enters again. If dead or weakened microbes are introduced into a healthy body, the body fights and kills the invading bacteria by producing suitable antibodies. The antibodies remain in the body and we are protected from the disease-causing microbes forever. This is how a vaccine works.

24. Observe the set up given in Fig. 2.2 and answer the following questions.

(a) What happens to the sugar solution in A?

(b) Which gas is released in A?

(c) What changes will you observe in B when the released gas passes through it? 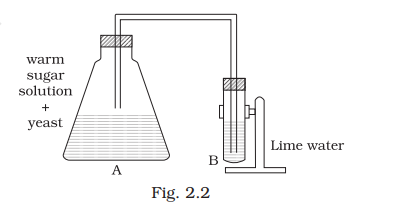 a) Yeast ferments sugar to convert it to alcohol and carbon-di-oxide is released. 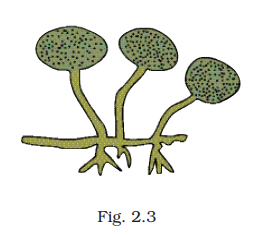 (a) Name the microorganism and the group to which it belongs.

(b) Name the food item on which the organism grows.

(c) Does it grow well in dry or in moist conditions?

(d) Is it safe to eat infected bread?

a) The image is of bread mould. It is a fungus

b) It grows on moist and stale bread

d) No, it is not safe to eat infected bread because fungus produces a poisonous substance which will spoil the food.

26. Give reasons for the following.

(a) Fresh milk is boiled before consumption while processed milk stored in packets can be consumed without boiling.

(b) Raw vegetables and fruits are kept in refrigerators whereas jams and pickles can be kept outside.

(d) Mosquitoes can be controlled by preventing stagnation of water though they do not live in water. Why?

a) Fresh milk is boiled to kill the harmful microorganisms in the milk. Packed milk is pasteurized hence there is no need to boil the pasteurized milk.

b)Raw vegetables easily get infected by microbes. Hence they are kept in the refrigerator as low temperature inhibits the growth of micro-organisms. In Jams and pickle, there are sugar and salt which acts as preservatives. Hence they do not get infected easily.

c) Beans and peas are leguminous plants which have Rhizobium in their root nodules. Rhizobium fixes atmospheric Nitrogen to enrich the soil and its fertility gets increases.

d) Though mosquitos do not live in water. But they lay their egg and their larvae grow in water. Hence mosquitoes can be controlled by preventing stagnation of water.

27. How can we prevent the following diseases?

a) Cholera can be prevented by following good personal hygiene and sanitation practices.

b) Typhoid can be prevented by eating properly cooked food, by drinking boiled water and by getting vaccinated against typhoid disease.

c) Hepatitis can be prevented by drinking boiled water and by getting vaccinated. 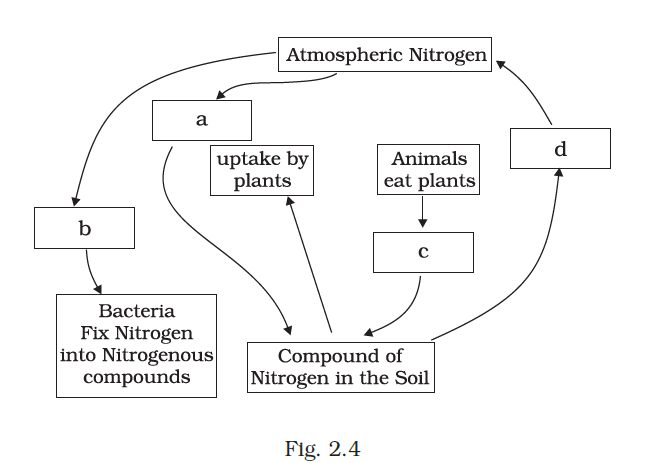 How do vaccines work in the Chapter 2 of NCERT Exemplar Solutions for Class 8 Science?

When a disease-carrying microbe enters our body, the body produces antibodies to fight the invader. The body also remembers how to fight the microbe if it enters again. If dead or weakened microbes are introduced into a healthy body, the body fights and kills the invading bacteria by producing suitable antibodies. The antibodies remain in the body and we are protected from the disease-causing microbes forever. Students can also download the NCERT Exemplar Solutions from BYJU’S in order to obtain a clear picture about the concepts which are important as per the CBSE syllabus for Class 8.

Why should I refer to the NCERT Exemplar Solutions for Class 8 Science Chapter 2?

The new concepts addressed in this chapter are challenging to grasp for students in Class 8. During class hours, students can clarify their doubts with their instructors or use reference material tailored to their needs. As a result, selecting the appropriate study material necessitates a thorough comprehension of the current CBSE syllabus. All of the topics covered in the prescribed textbook are covered in the NCERT Exemplar Solutions for Class 8 Science Chapter 2.

How to score more marks in the Chapter 2 of NCERT Exemplar Solutions for Class 8 Science?

The NCERT Exemplar Solutions for Class 8 Science Chapter 2 offers students a solid foundation of fundamental ideas. The solutions devised by BYJU’S faculty are accurate and based on the most recent CBSE marks weightage. Students will obtain a better understanding of the ideas that are vital for the examinations by consulting the solutions. Students can retain concepts more successfully with the help of quality answers and a structured approach.