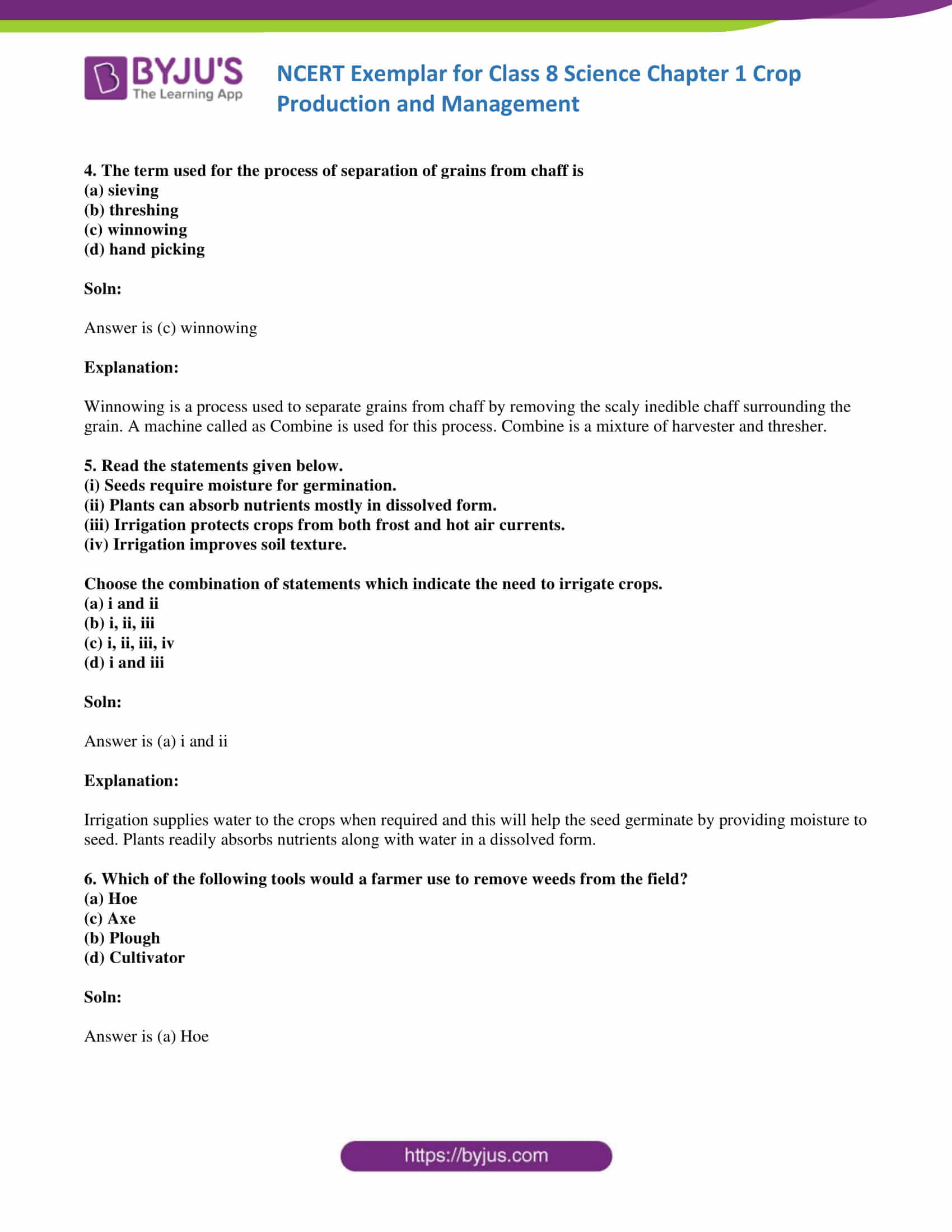 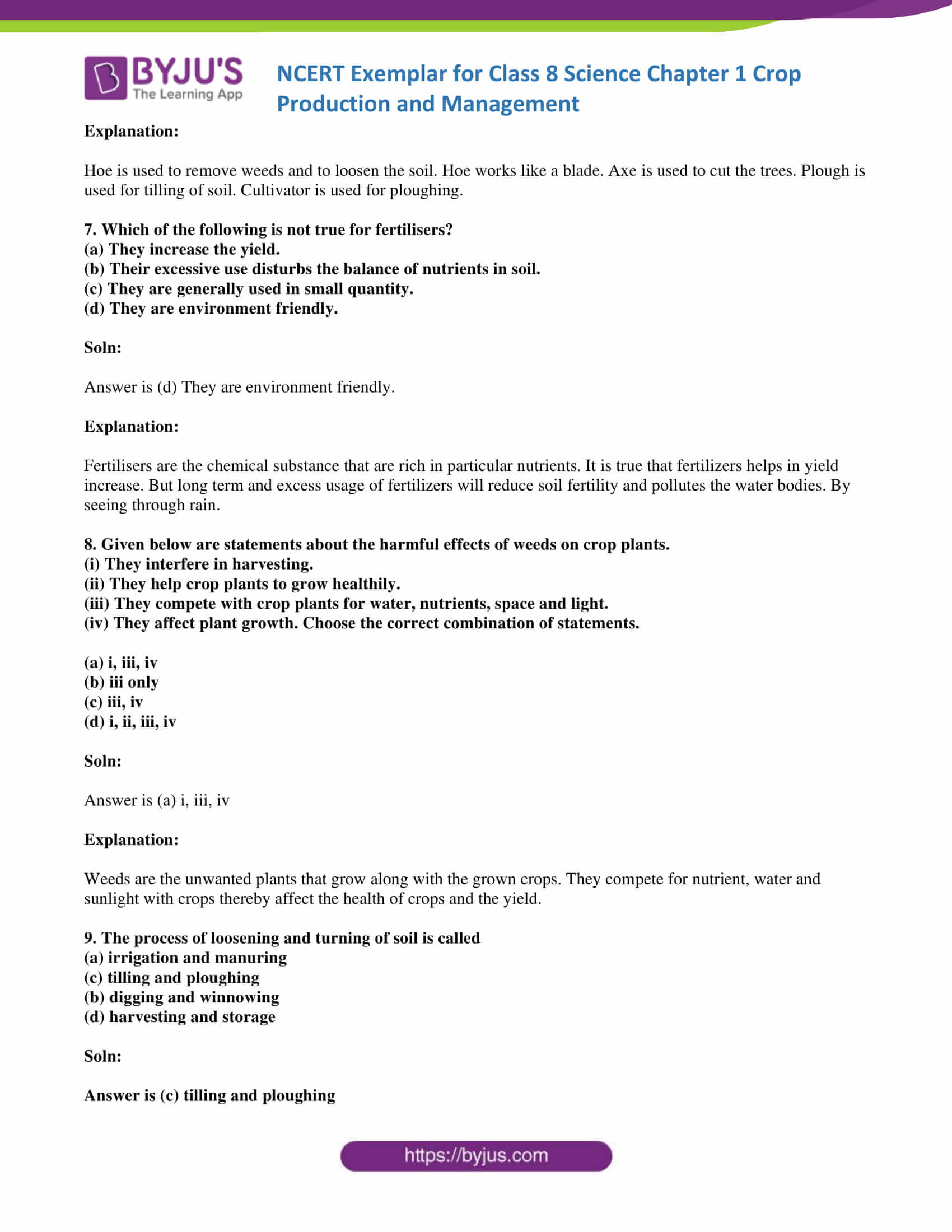 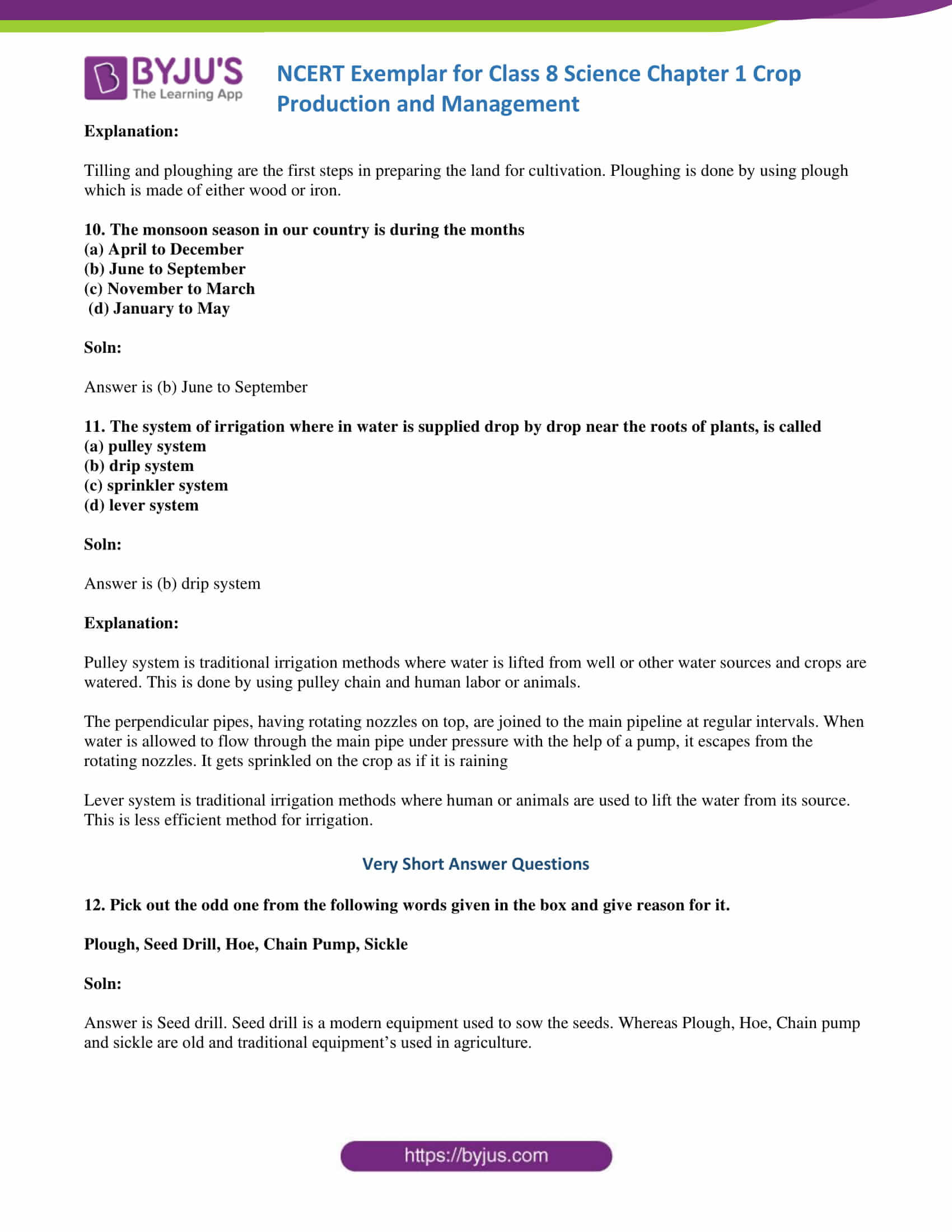 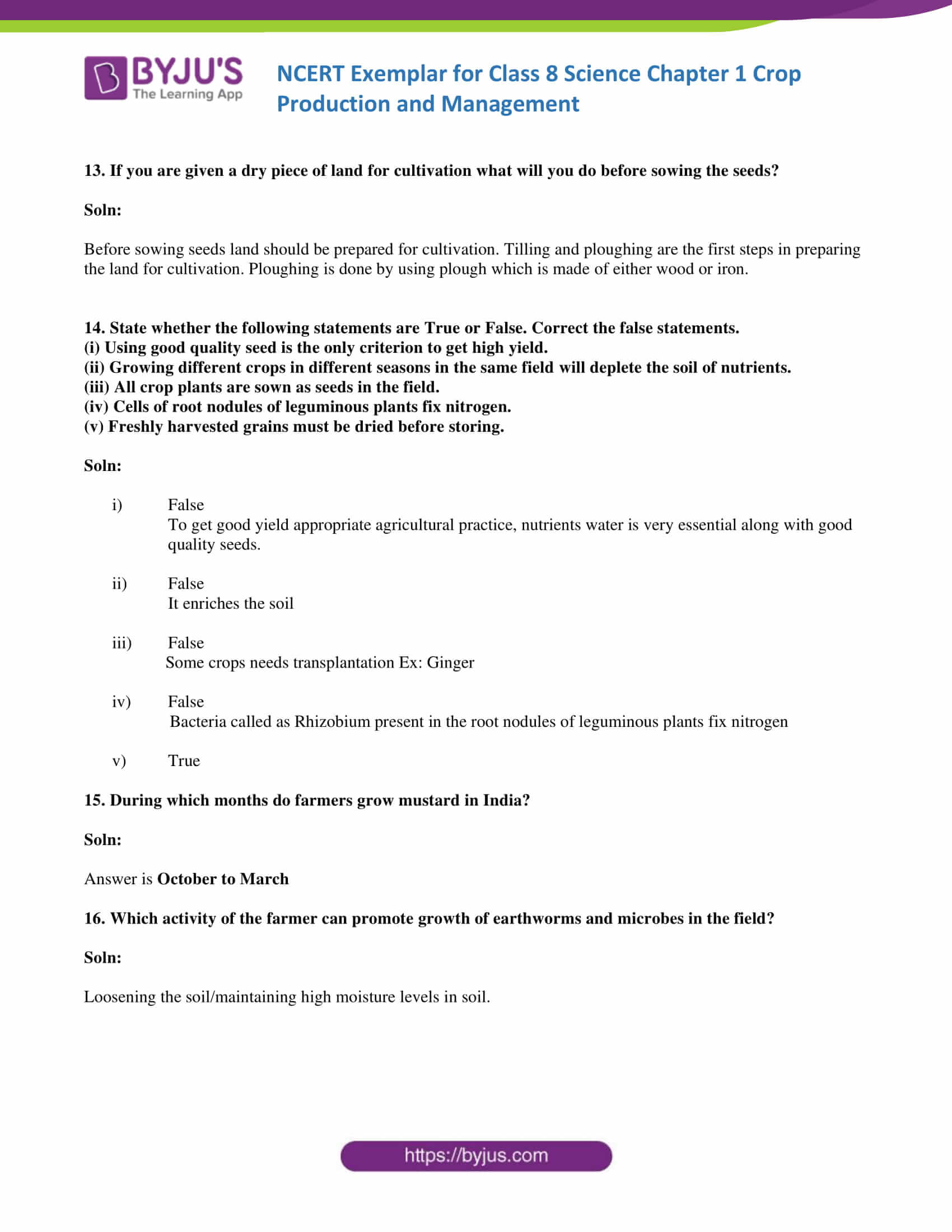 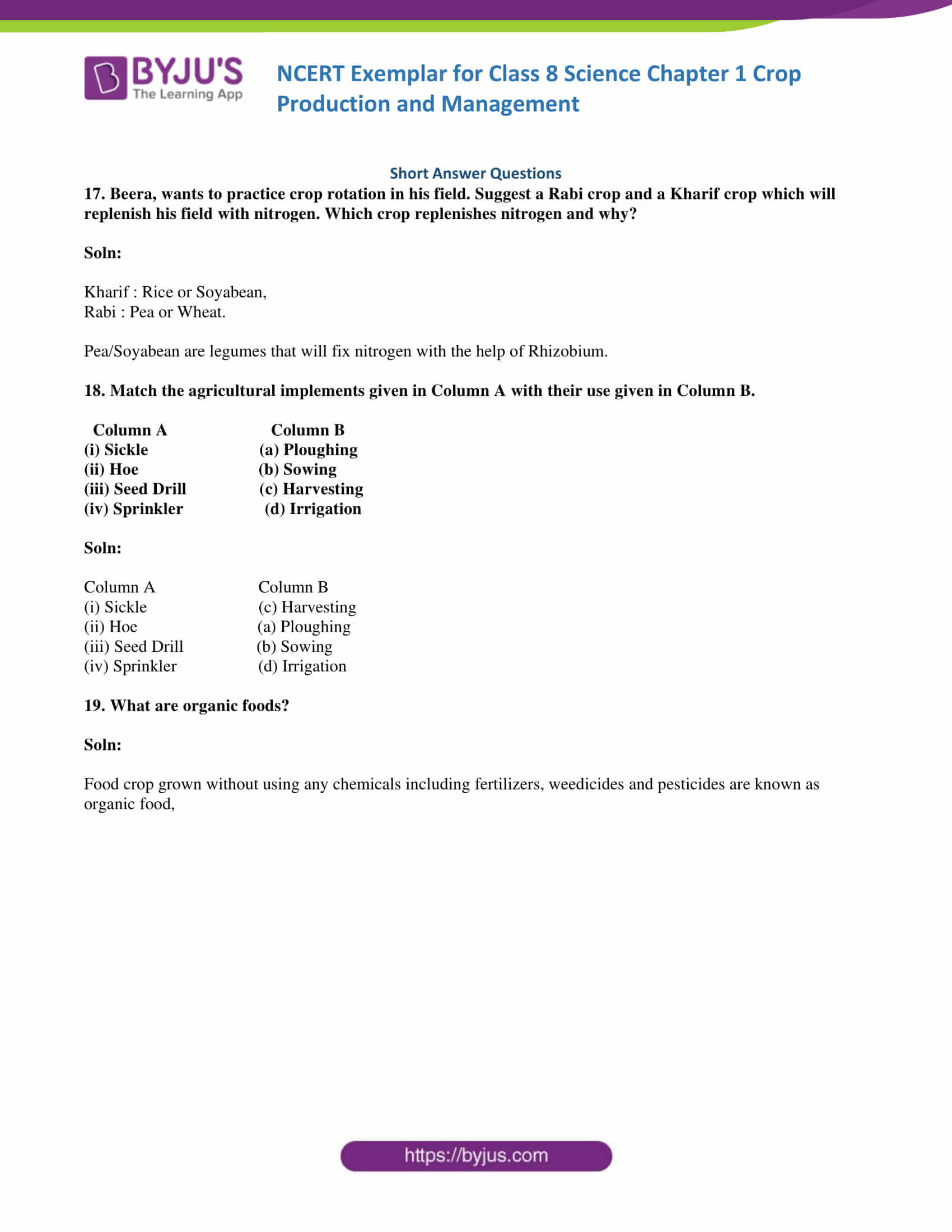 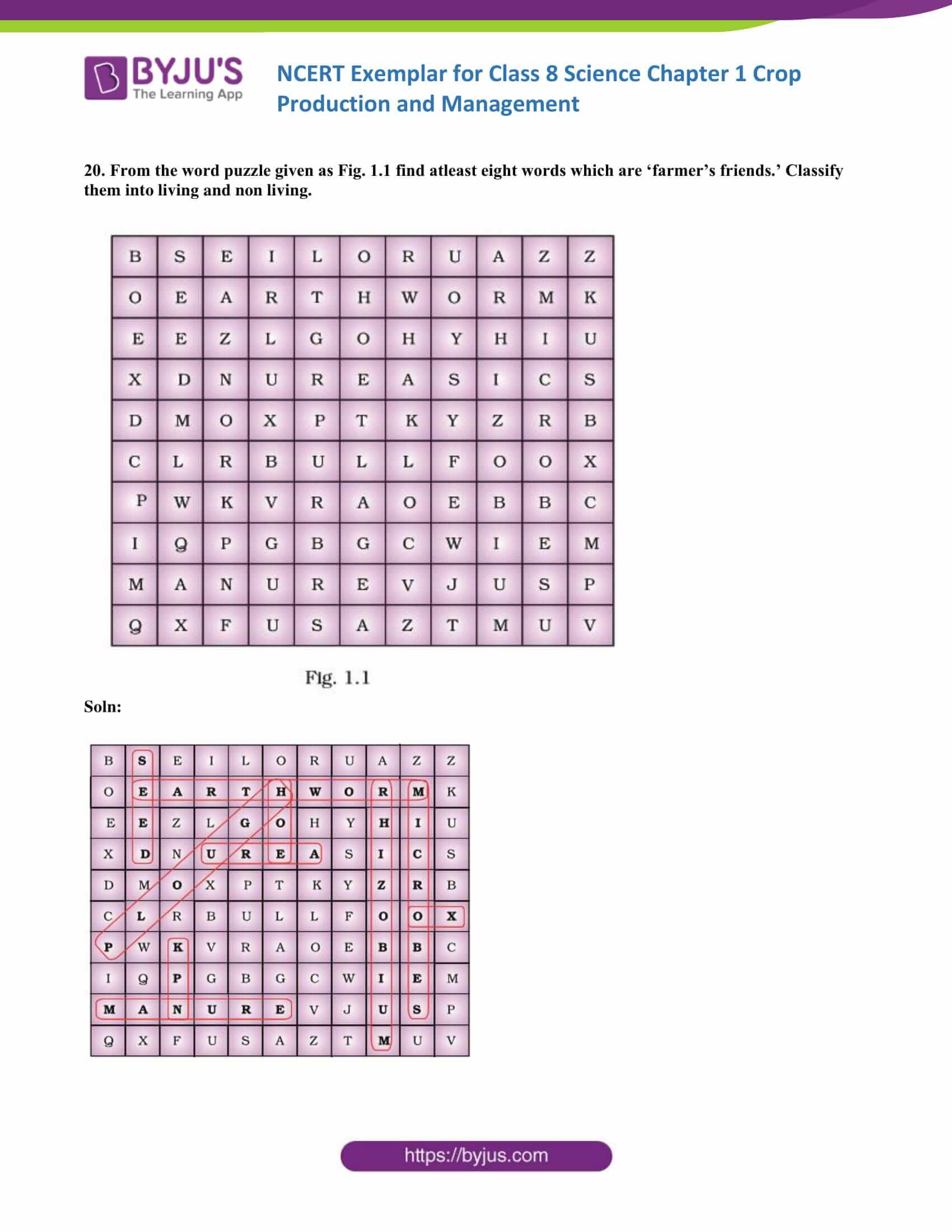 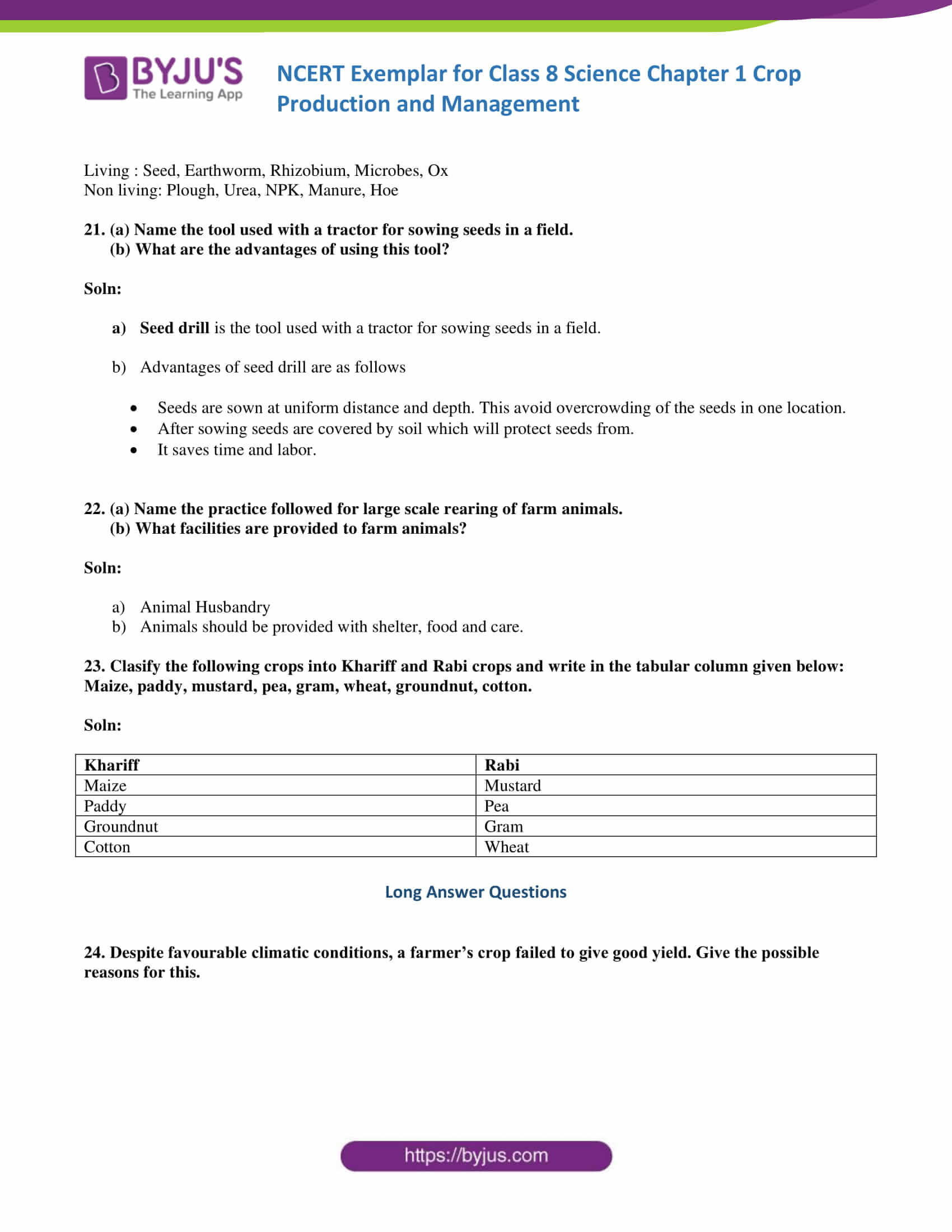 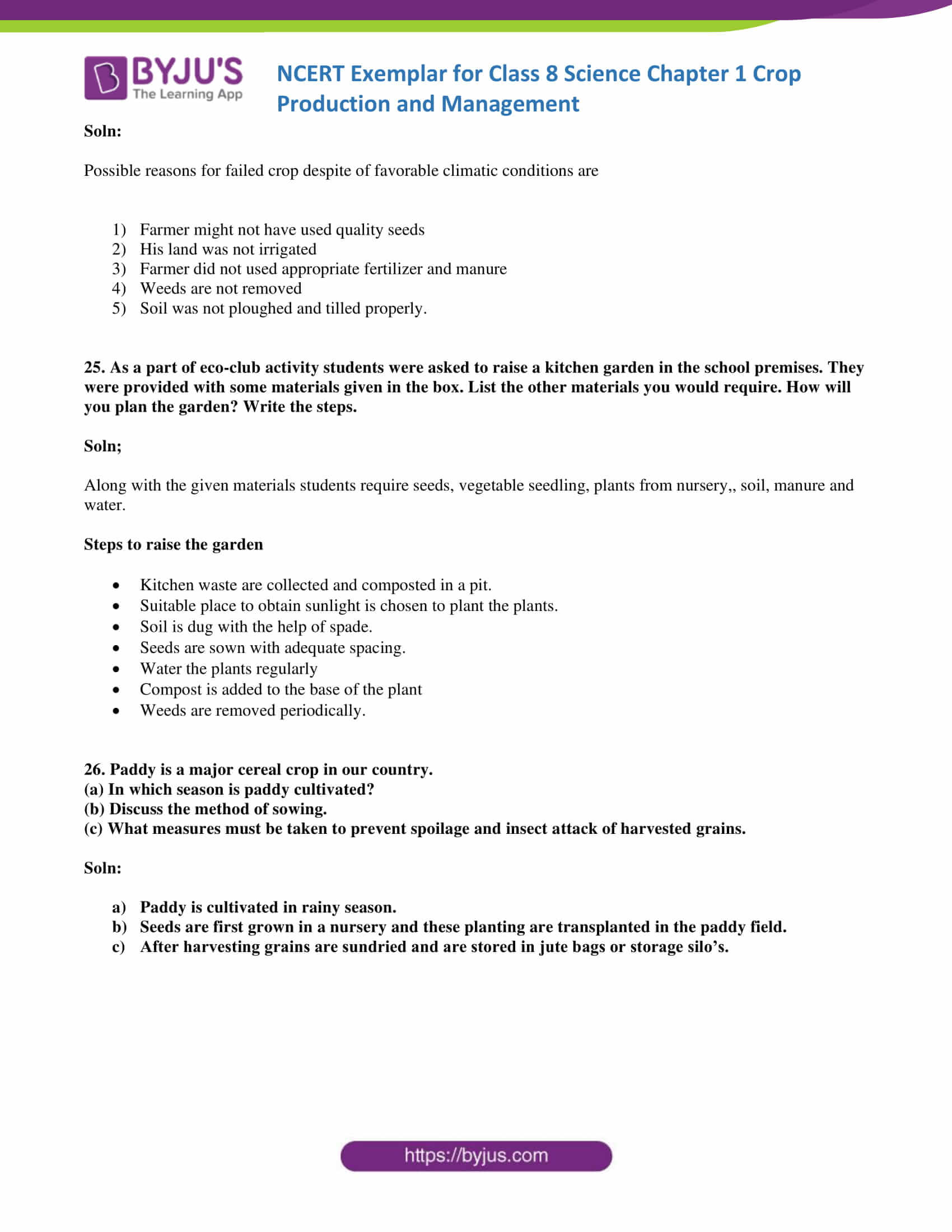 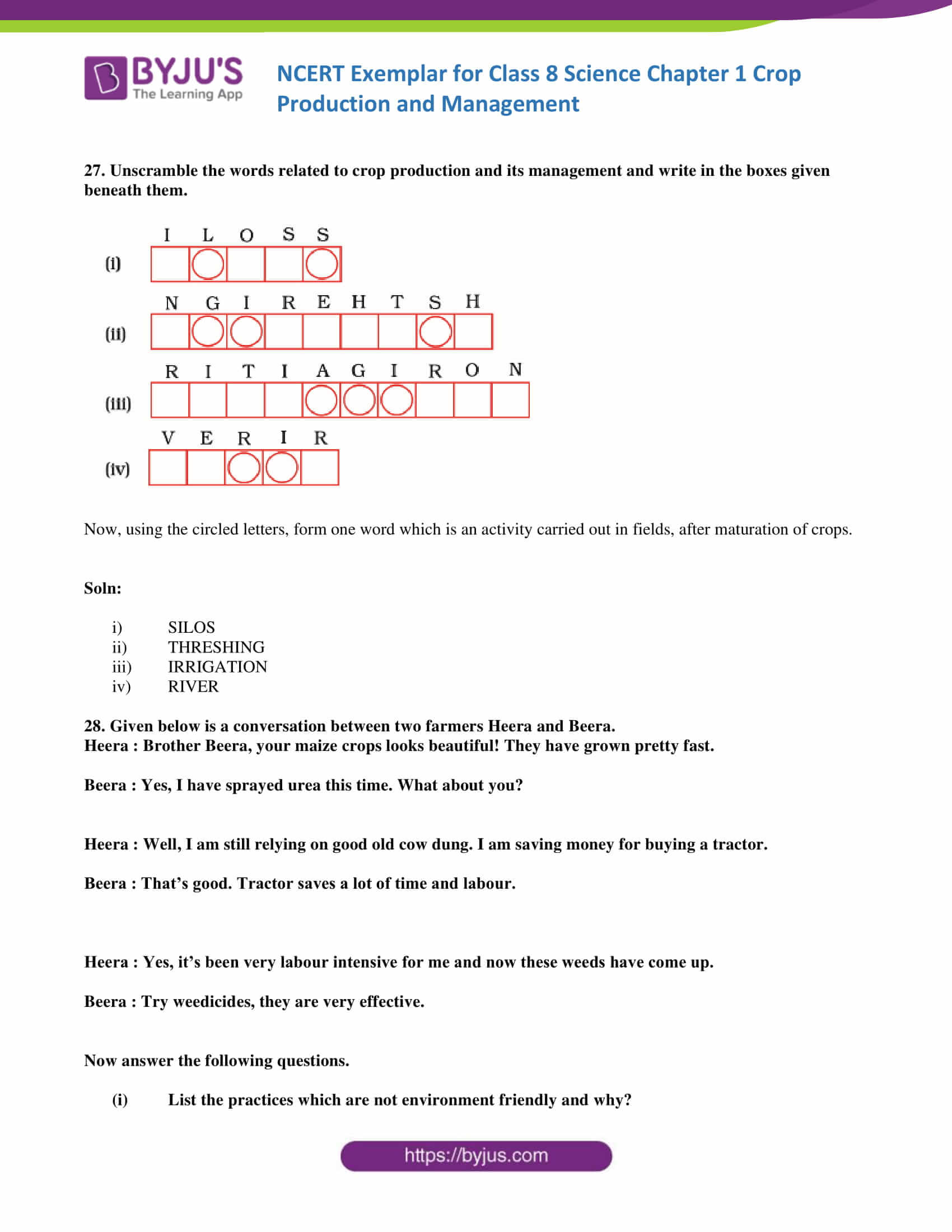 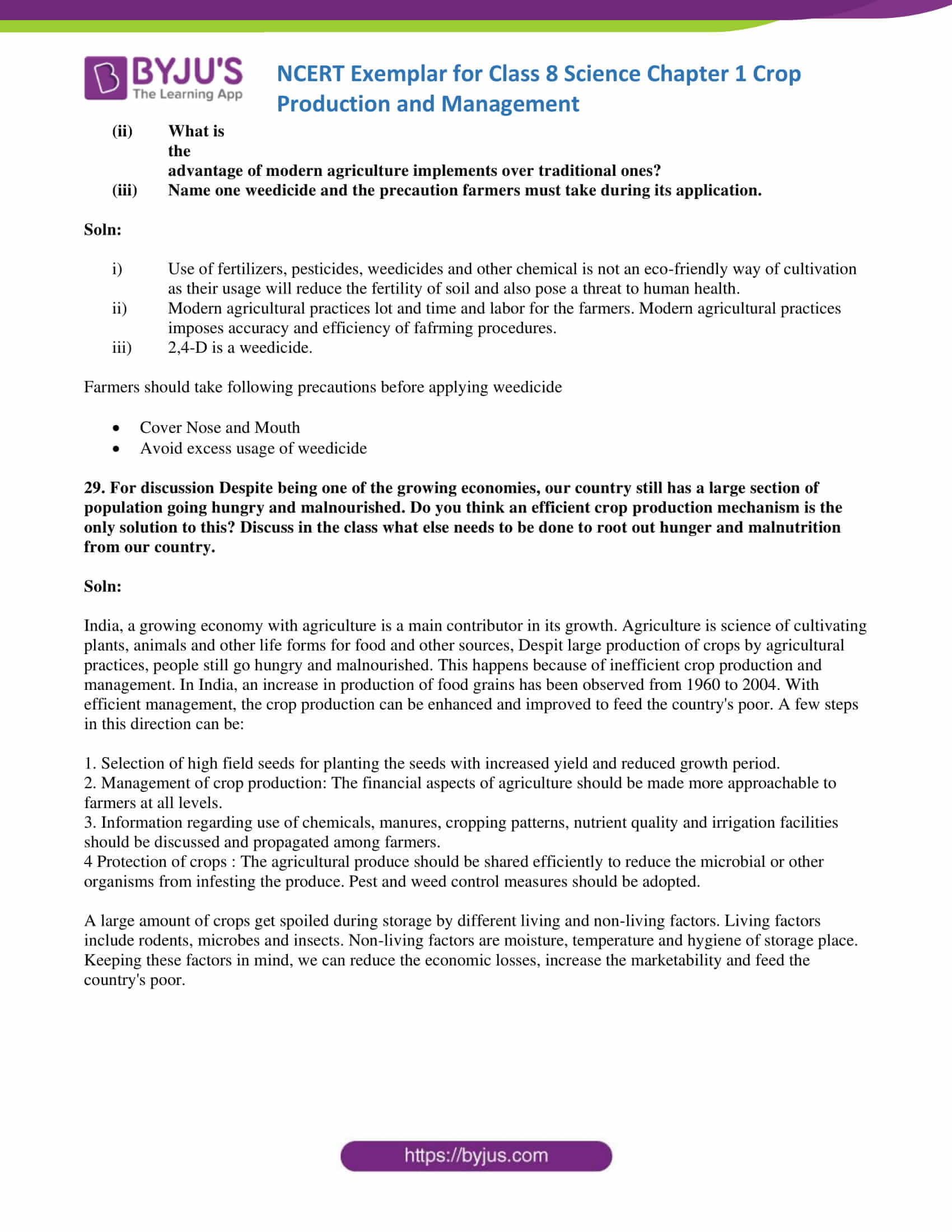 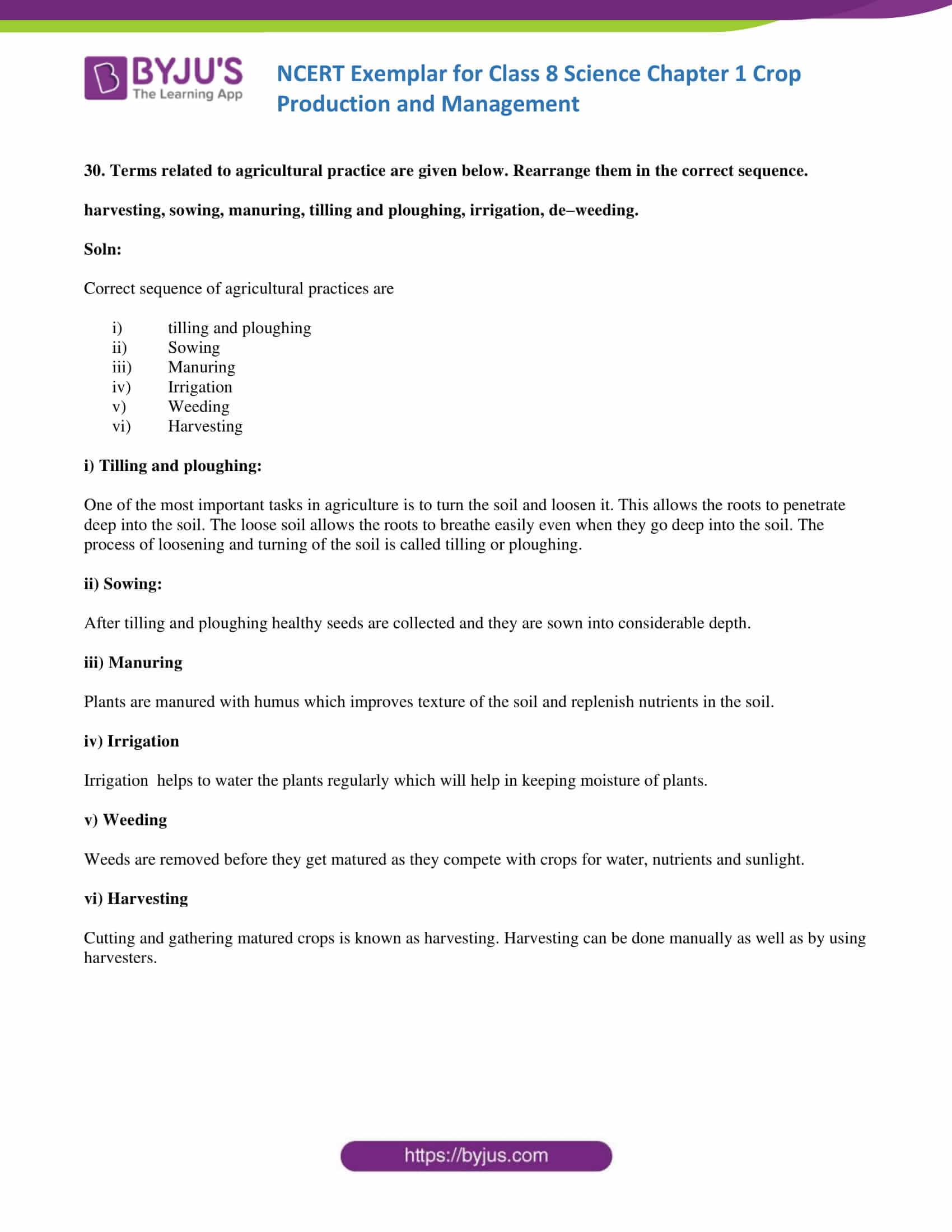 1. Which one of the following condition is not essential to grow maize?

The answer is (c) Low temperature

Maize is grown in a warm and tropical climate. The optimum temperature for growing maize is between 180c -27 0c in day and 140-150c in the night. Hence a cold climate is not essential to grow maize.

The answer is (b) Stem (rhizome)

Ginger is modified underground stem which will propagate vegetatively by its stem. Ginger does not propagate by its root, stem or leaf.

3. Which of the following statement is not true for organic manure?

(a) It enhances the water holding capacity of the soil.

(b) It has a balance of all plant nutrients.

(c) It provides humus to the soil.

(d) It improves the texture of the soil.

The answer is (b) It has a balance of all plant nutrients.

Organic manure is obtained by decomposition of plants and animal waste which make the soil nutrient-rich. But it does not mean that organic manure provides all the nutrients in required amount hence option b) is wrong.

4. The term used for the process of separation of grains from the chaff is

The answer is (c) Winnowing

Winnowing is a process used to separate grains from the chaff by removing the scaly inedible chaff surrounding the grain. A machine called Combine is used for this process. The combine is a mixture of harvester and thresher.

5. Read the statements given below.

(i) Seeds require moisture for germination.

Choose the combination of statements which indicate the need to irrigate crops.

Irrigation supplies water to the crops when required and this will help the seed germinate by providing moisture to seed. Plants readily absorb nutrients along with water in a dissolved form.

6. Which of the following tools would a farmer use to remove weeds from the field?

The answer is (a) Hoe

7. Which of the following is not true for fertilisers?

(a) They increase the yield.

(b) Their excessive use disturbs the balance of nutrients in the soil.

(c) They are generally used in small quantity.

(d) They are environment-friendly.

The answer is (d) They are environment-friendly.

Fertilisers are the chemical substance that is rich in particular nutrients. Fertilizers indeed helps in yield increase. But the long term and excess usage of fertilizers will reduce soil fertility and pollutes the water bodies. By seeing through the rain.

8. Given below are statements about the harmful effects of weeds on crop plants.

(i) They interfere with harvesting.

(iii) They compete with crop plants for water, nutrients, space and light.

Weeds are the unwanted plants that grow along with the grown crops. They compete for nutrient, water and sunlight with crops thereby affect the health of crops and the yield.

9. The process of loosening and turning of soil is called

(a) irrigation and manuring

(b) digging and winnowing

Answer is (c) tilling and ploughing

Tilling and ploughing are the first steps in preparing the land for cultivation. Ploughing is done by using plough which is made of either wood or iron.

10. The monsoon season in our country is during the months

(a) April to December

(b) June to September

(d) January to May

The answer is (b) June to September

11. The system of irrigation wherein water is supplied drop by drop near the roots of plants, is called

The answer is (b) drip system

Pulley system is traditional irrigation methods where water is lifted from wells or other water sources and crops are watered. This is done by using the pulley chain and human labour or animals.

The perpendicular pipes, having rotating nozzles on top, are joined to the main pipeline at regular intervals. When water is allowed to flow through the main pipe under pressure with the help of a pump, it escapes from the rotating nozzles. It gets sprinkled on the crop as if it is raining

12. Pick out the odd one from the following words given in the box and give the reason for it.

The answer is Seed drill. The seed drill is modern equipment used to sow the seeds. Whereas Plough, Hoe, Chain pump and sickle are old and traditional equipment’s used in agriculture.

13. If you are given a dry piece of land for cultivation what will you do before sowing the seeds?

Before sowing, seeds land should be prepared for cultivation. Tilling and ploughing are the first steps in preparing the land for cultivation. Ploughing is done by using plough which is made of either wood or iron.

14. State whether the following statements are True or False. Correct the false statements.

(i) Using good quality seed is the only criterion to get a high yield.

(ii) Growing different crops in different seasons in the same field will deplete the soil of nutrients.

(iii) All crop plants are sown as seeds in the field.

(v) Freshly harvested grains must be dried before storing.

15. During which months do farmers grow mustard in India?

During October to March farmers grow mustard in India.

16. Which activity of the farmer can promote the growth of earthworms and microbes in the field?

Loosening the soil/maintaining high moisture levels in the soil.

17. Beera wants to practice crop rotation in his field. Suggest a Rabi crop and a Kharif crop which will replenish his field with nitrogen. Which crop replenishes nitrogen and why?

Pea/Soyabean are legumes that will fix nitrogen with the help of Rhizobium.

19. What are organic foods?

Food crop grown without using any chemicals including fertilizers, weedicides and pesticides are known as organic food.

20. From the word puzzle given as Fig. 1.1 find at least eight words which are ‘farmer’s friends.’ Classify them into living and non-living. 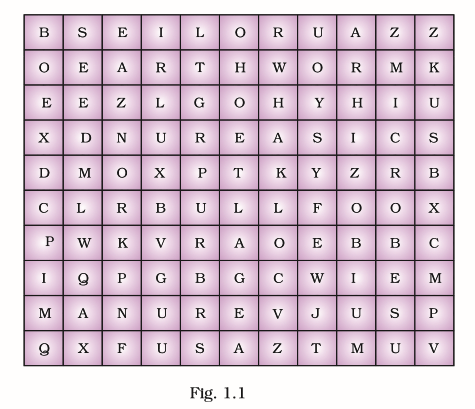 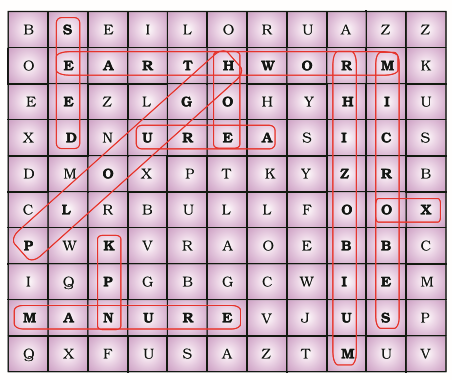 21. (a) Name the tool used with a tractor for sowing seeds in a field.

(b) What are the advantages of using this tool?

a) The seed drill is the tool used with a tractor for sowing seeds in a field.
b) Advantages of seed drill are as follows

22. (a) Name the practice followed for large scale rearing of farm animals.

(b) What facilities are provided to farm animals?

a) Animal Husbandry
b) Animals should be provided with shelter, food and care.

23. Classify the following crops into Kharif and Rabi crops and write in the tabular column given below: Maize, paddy, mustard, pea, gram, wheat, groundnut, cotton.

24. Despite favourable climatic conditions, a farmer’s crop failed to give a good yield. Give the possible reasons for this.

Possible reasons for failed crop despite favourable climatic conditions are

25. As a part of the eco-club activity, students were asked to raise a kitchen garden on the school premises. They were provided with some materials given in the box. List the other materials you would require. How will you plan the garden? Write the steps.

Along with the given materials, students require seeds, vegetable seedling, plants from the nursery, soil, manure and water.

Steps to raise the garden

26. Paddy is a major cereal crop in our country.

(a) In which season is paddy cultivated?

(b) Discuss the method of sowing.

(c) What measures must be taken to prevent spoilage and insect attack of harvested grains?

a) Paddy is cultivated in the rainy season.

b) Seeds are first grown in a nursery and these plantings are transplanted in the paddy field.

c) After harvesting grains are sundried and are stored in jute bags or storage silos.

27. Unscramble the words related to crop production and its management and write in the boxes given beneath them. 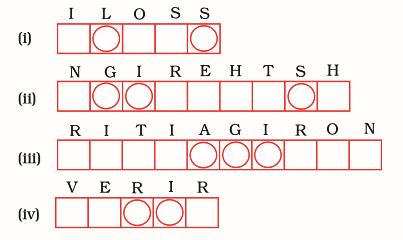 Now, using the circled letters, form one word which is an activity carried out in fields, after maturation of crops.

28. Given below is a conversation between two farmers Heera and Beera.

Beera: Yes, I have sprayed urea this time. What about you?

Heera: Well, I am still relying on good old cow dung. I am saving money on buying a tractor.

Heera: Yes, it’s been very labour intensive for me and now these weeds have come up.

29. For discussion Despite being one of the growing economies, our country still has a large section of the population going hungry and malnourished. Do you think an efficient crop production mechanism is the only solution to this? Discuss in the class what else needs to be done to root out hunger and malnutrition from our country.

India, a growing economy with agriculture is the main contributor to its growth. Agriculture is the science of cultivating plants, animals and other life forms for food and other sources, Despite large production of crops by agricultural practices, people still go hungry and malnourished. This happens because of inefficient crop production and management. In India, an increase in production of food grains has been observed from 1960 to 2004. With efficient management, crop production can be enhanced and improved to feed the country’s poor. A few steps in this direction can be:

1. Selection of high field seeds for planting the seeds with increased yield and reduced growth period.

2. Management of crop production: The financial aspects of agriculture should be made more approachable to farmers at all levels.

3. Information regarding the use of chemicals, manures, cropping patterns, nutrient quality and irrigation facilities should be discussed and propagated among farmers.

4 Protection of crops: The agricultural produce should be shared efficiently to reduce the microbial or other organisms from infesting the produce. Pest and weed control measures should be adopted.

A large number of crops get spoiled during storage by different living and non-living factors. Living factors include rodents, microbes and insects. Non-living factors are moisture, temperature and hygiene of storage place. Keeping these factors in mind, we can reduce the economic losses, increase the marketability and feed the country’s poor.

30. Terms related to the agricultural practice are given below. Rearrange them in the correct sequence.

The correct sequence of agricultural practices are

i) Tilling and Ploughing

i) Tilling and ploughing:

After tilling and ploughing healthy seeds are collected and they are sown into considerable depth.

Plants are manured with humus which improves the texture of the soil and replenishes nutrients in the soil.

Irrigation helps to water the plants regularly which will help in keeping the moisture of plants.

Weeds are removed before they get matured as they compete with crops for water, nutrients and sunlight.

Cutting and gathering matured crops is known as harvesting. Harvesting can be done manually as well as by using harvesters.

Students are advised to go through this NCERT exemplar to determine their strengths and weaknesses and plan their study accordingly. Along with NCERT questions, students should try to solve the previous year questions as well as the sample papers to get acquainted with the latest exam pattern and marking scheme.

What are the tools used with the tractor for sowing seeds in a field?

IT is the practice followed for large scale rearing of farm animals.

What are the month’s mustards are sown to grow?

Which activity of the farmer can promote the growth of earthworms and microbes in the field?

Loosening the soil/maintaining high moisture levels in the soil.