Cell structure and functions are one of the most important chapters of CBSE class 8 Science syllabus. In this chapter, the students will be introduced to the cell which is also known as the smallest unit of life. After reading this chapter students will learn about animal cells, plant cells, cell membrane, cell wall, cytoplasm and lot more things. To master the concepts of the cell, students are advised to solve the NCERT exemplar for Class 8 Science Chapter 8 cell structure and function. 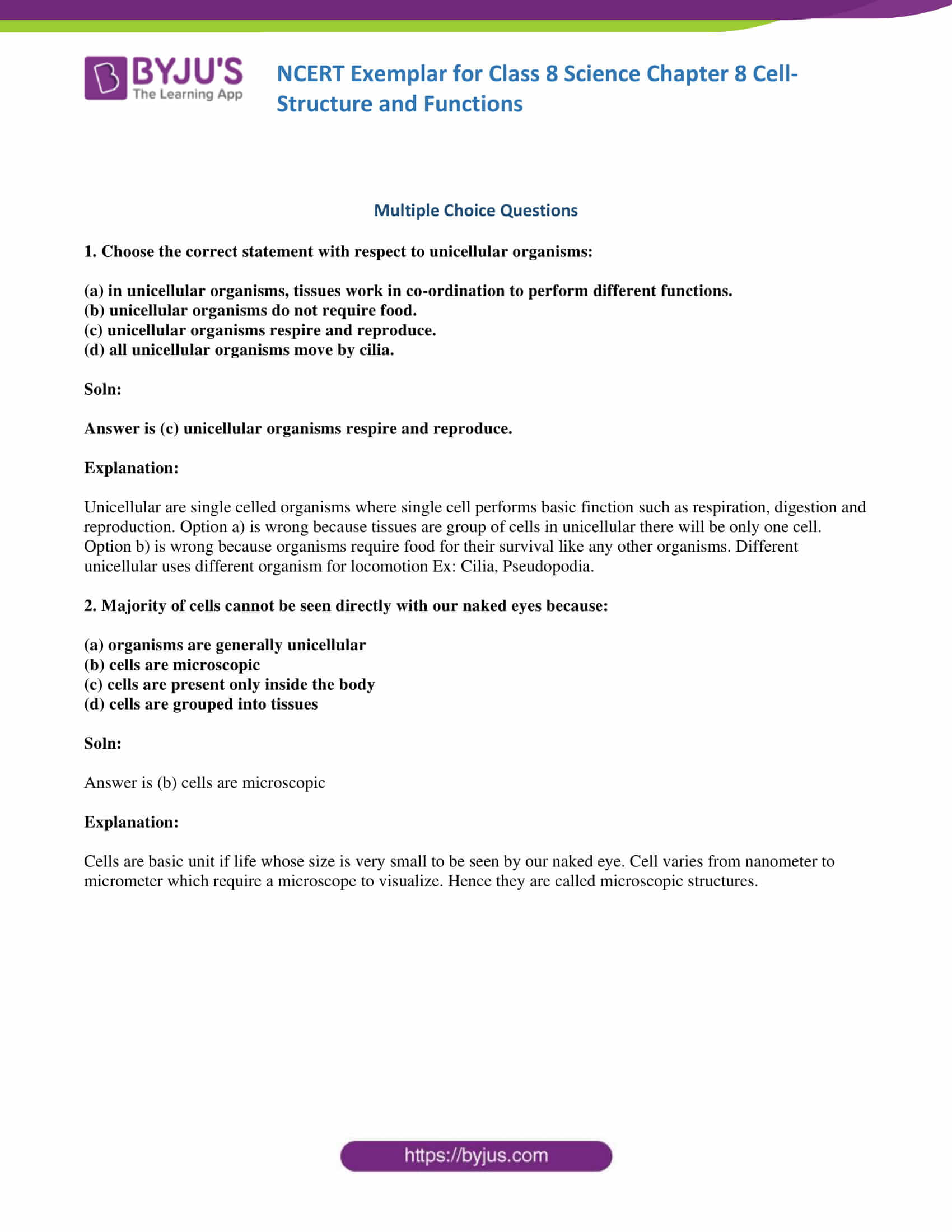 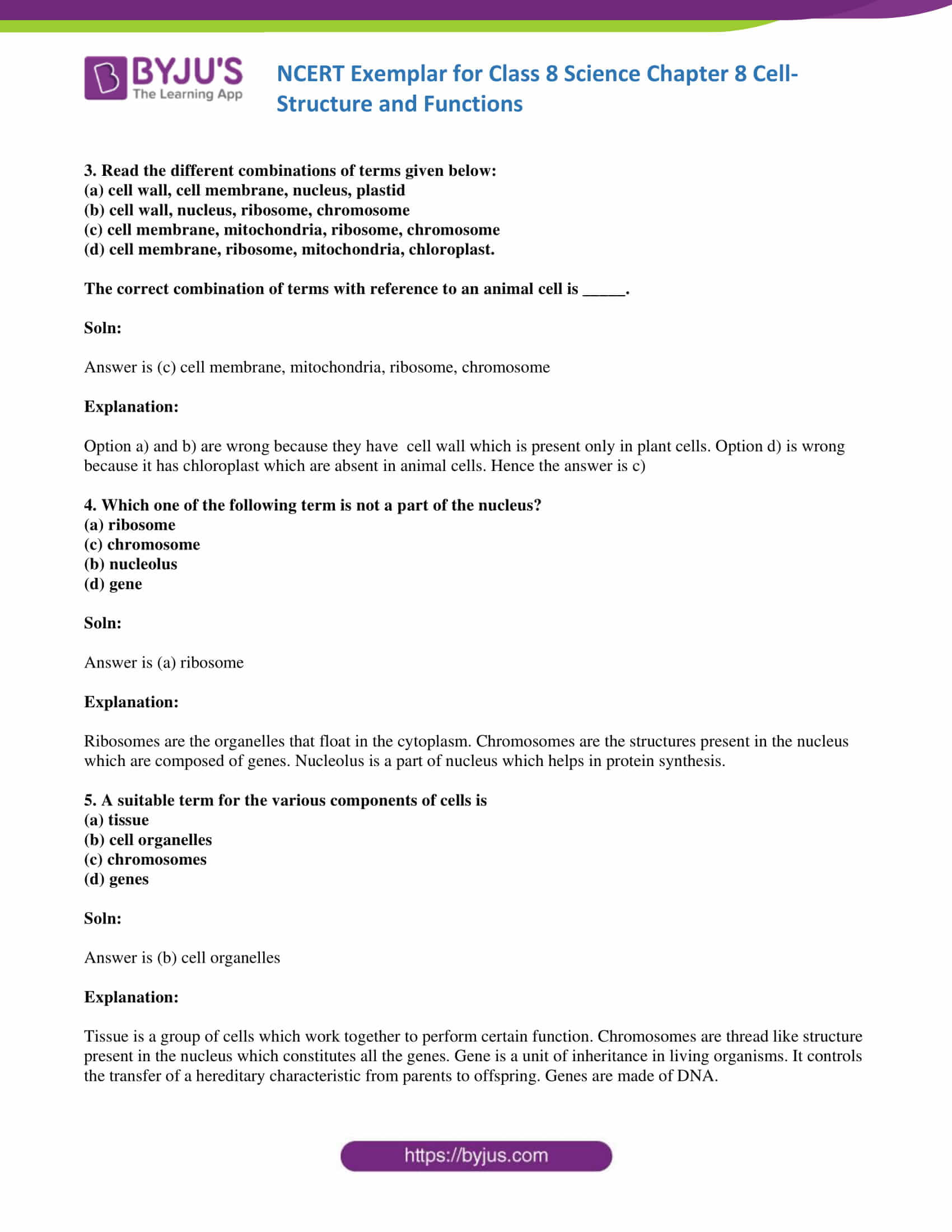 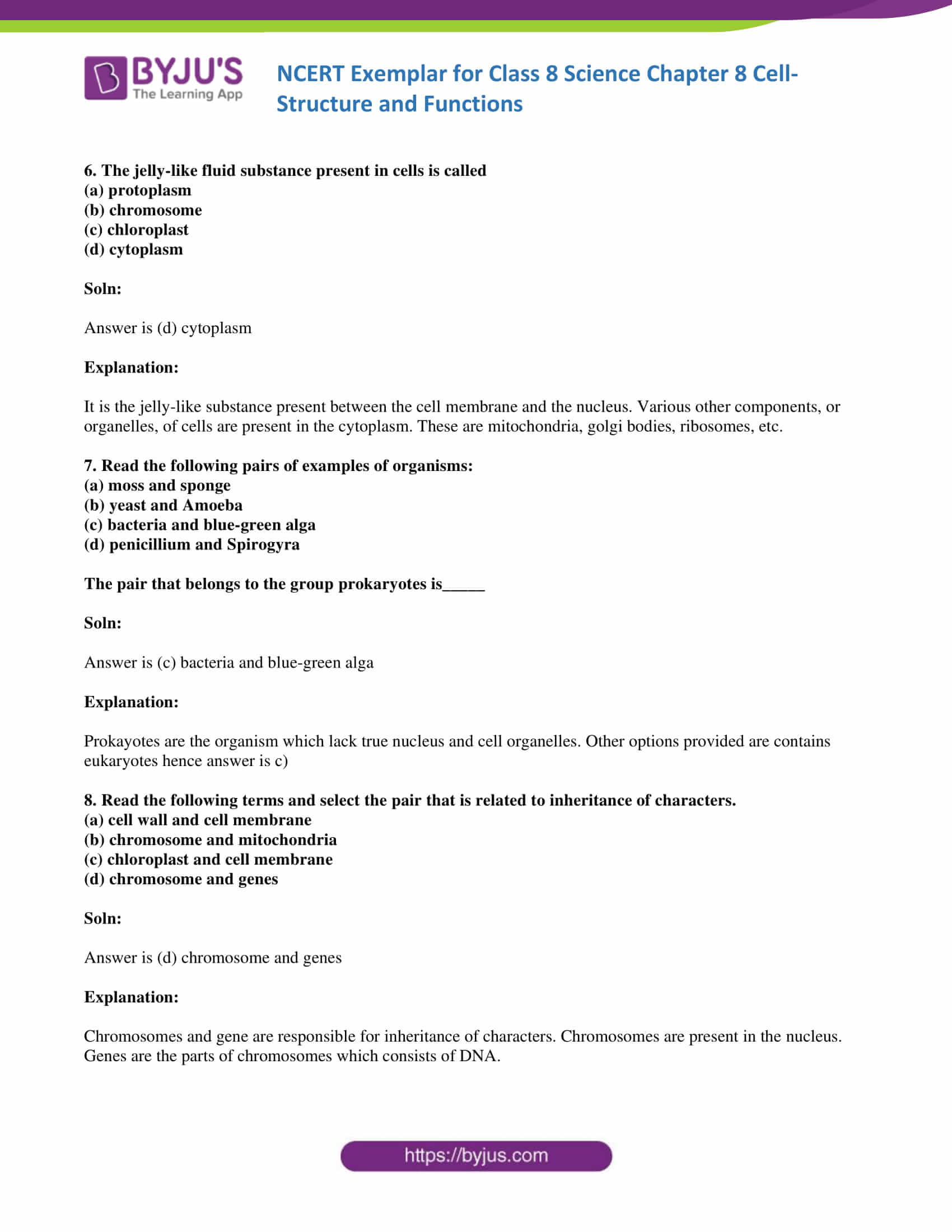 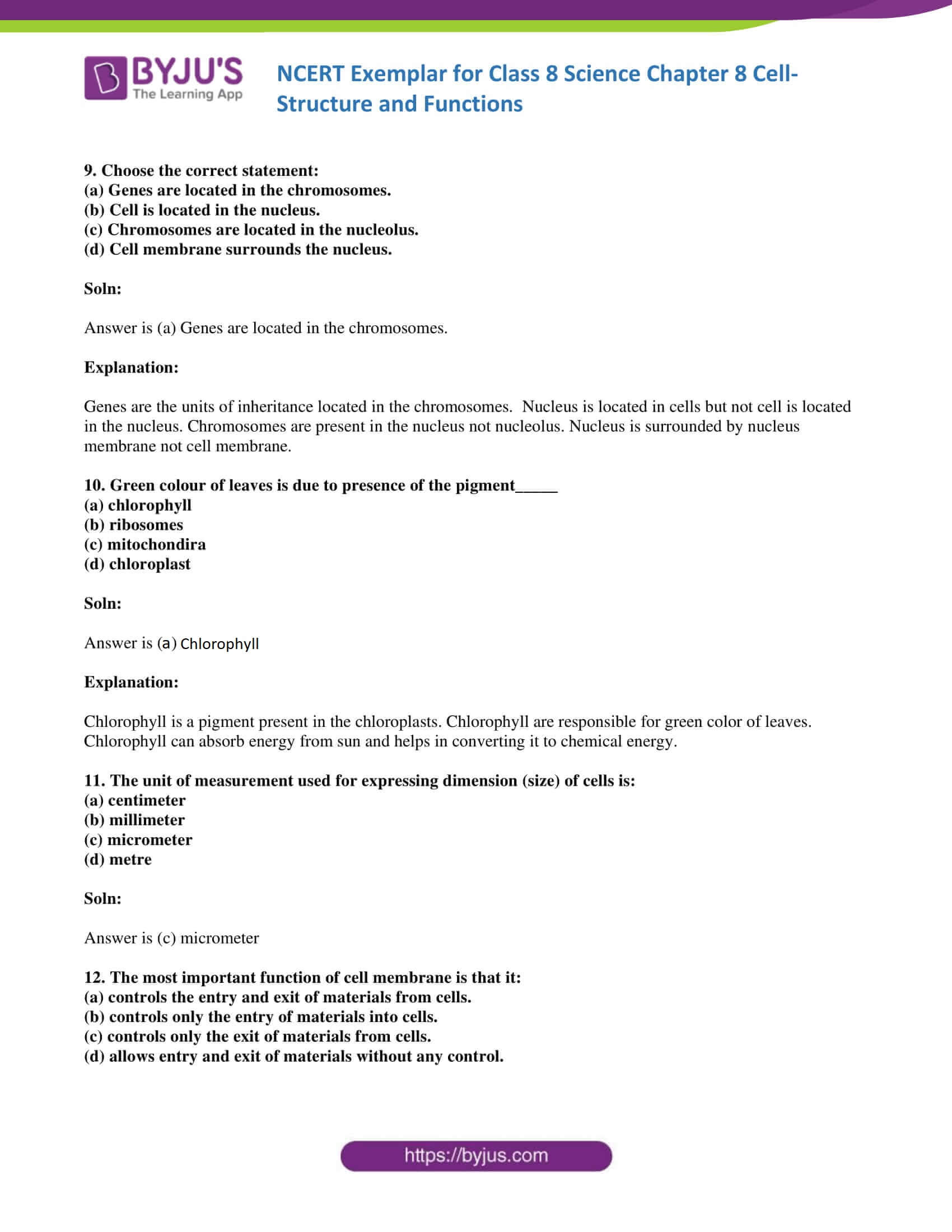 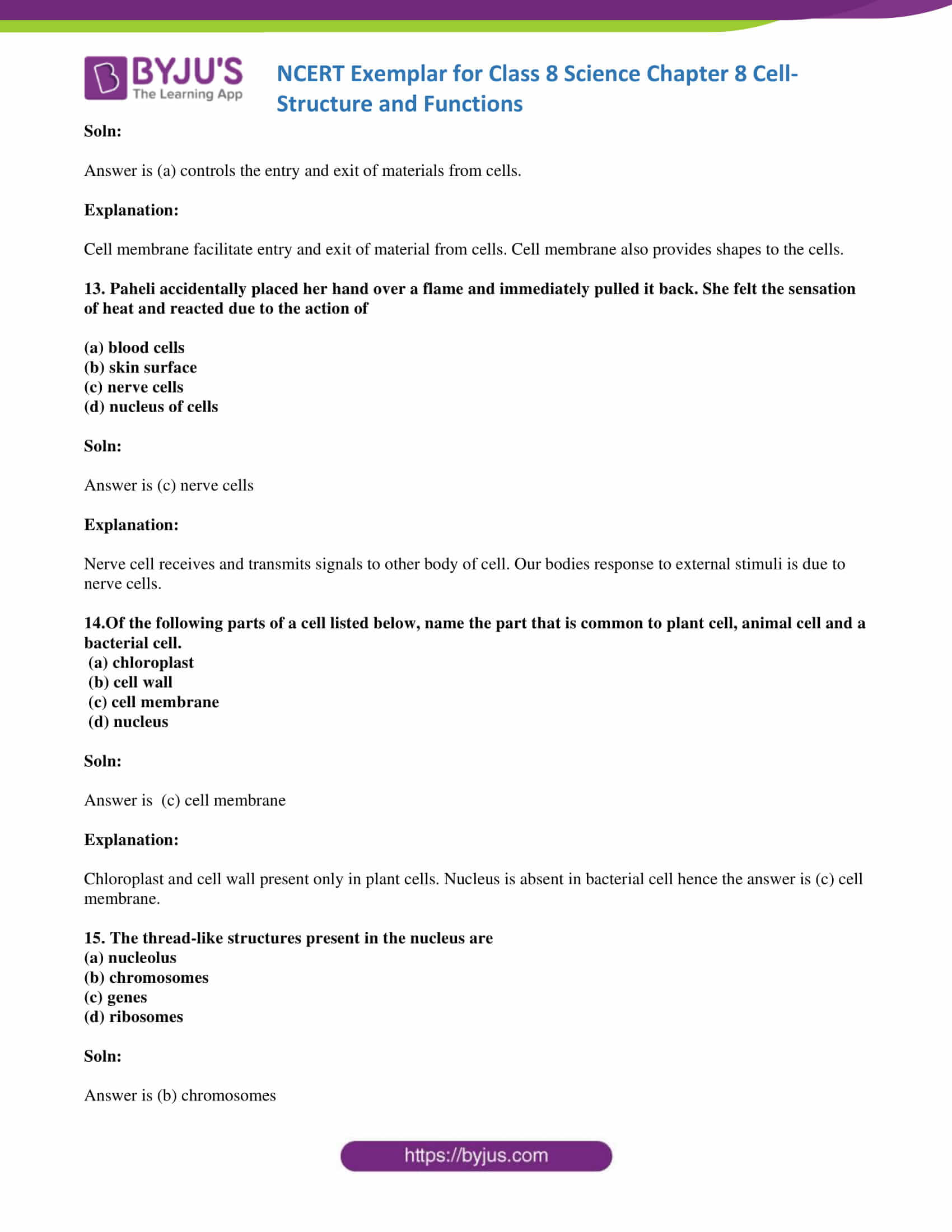 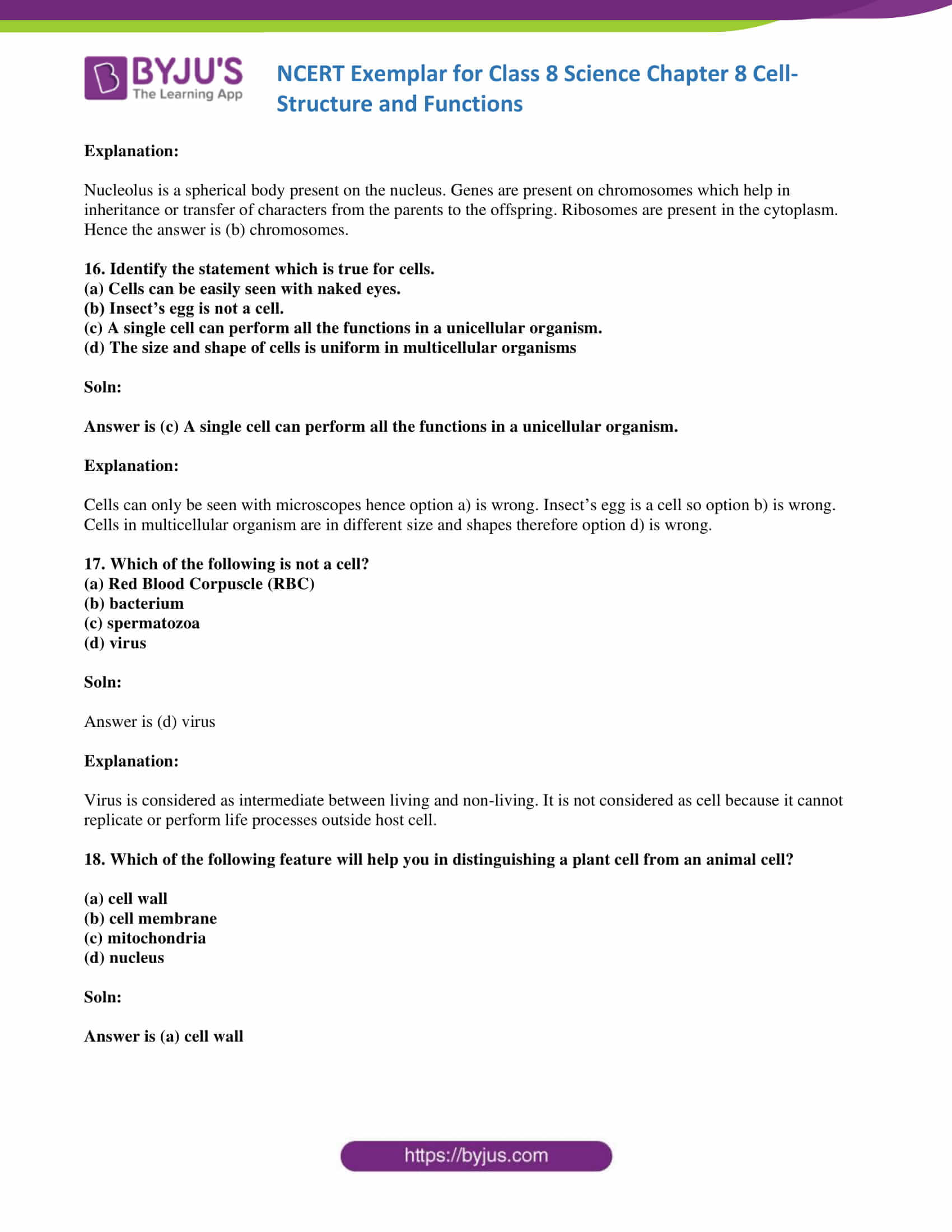 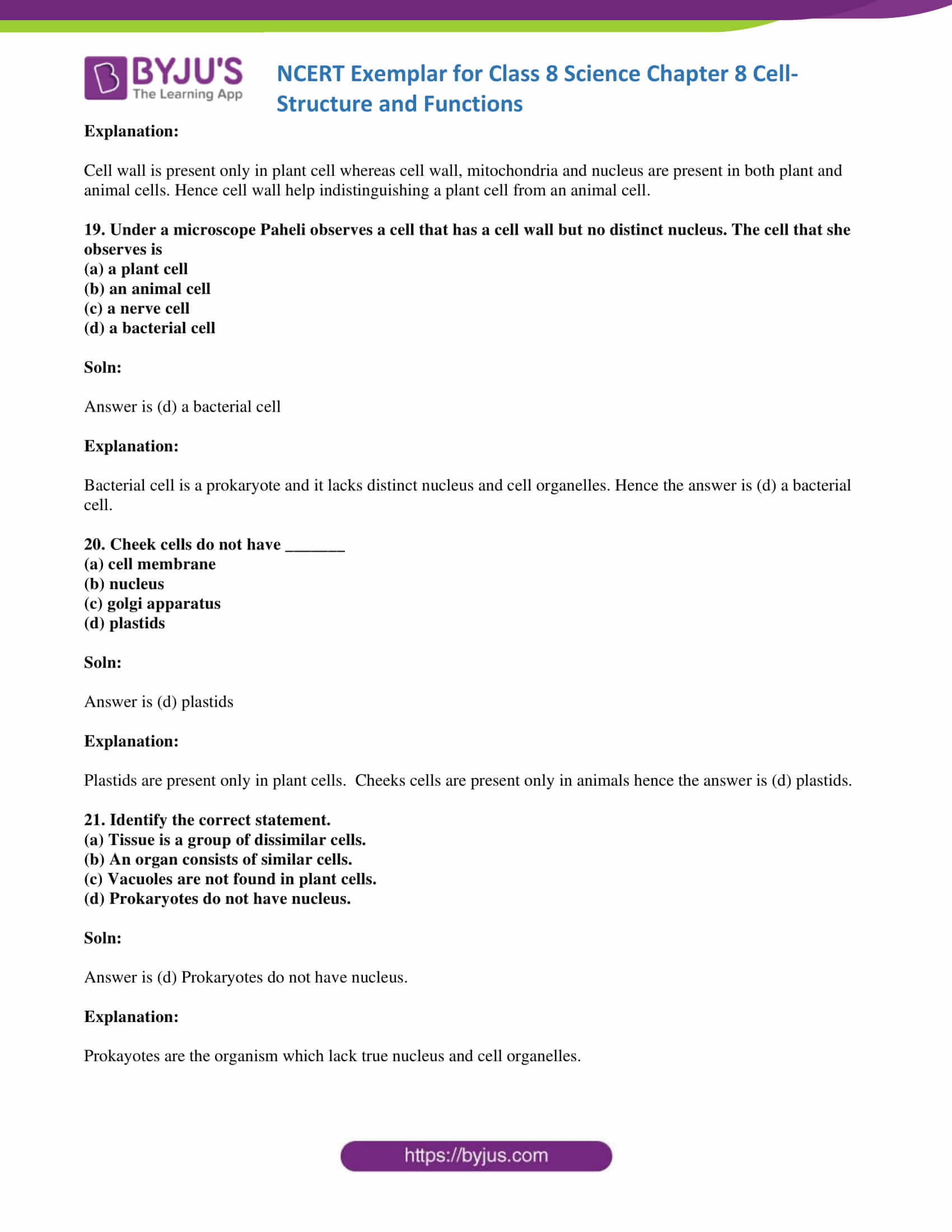 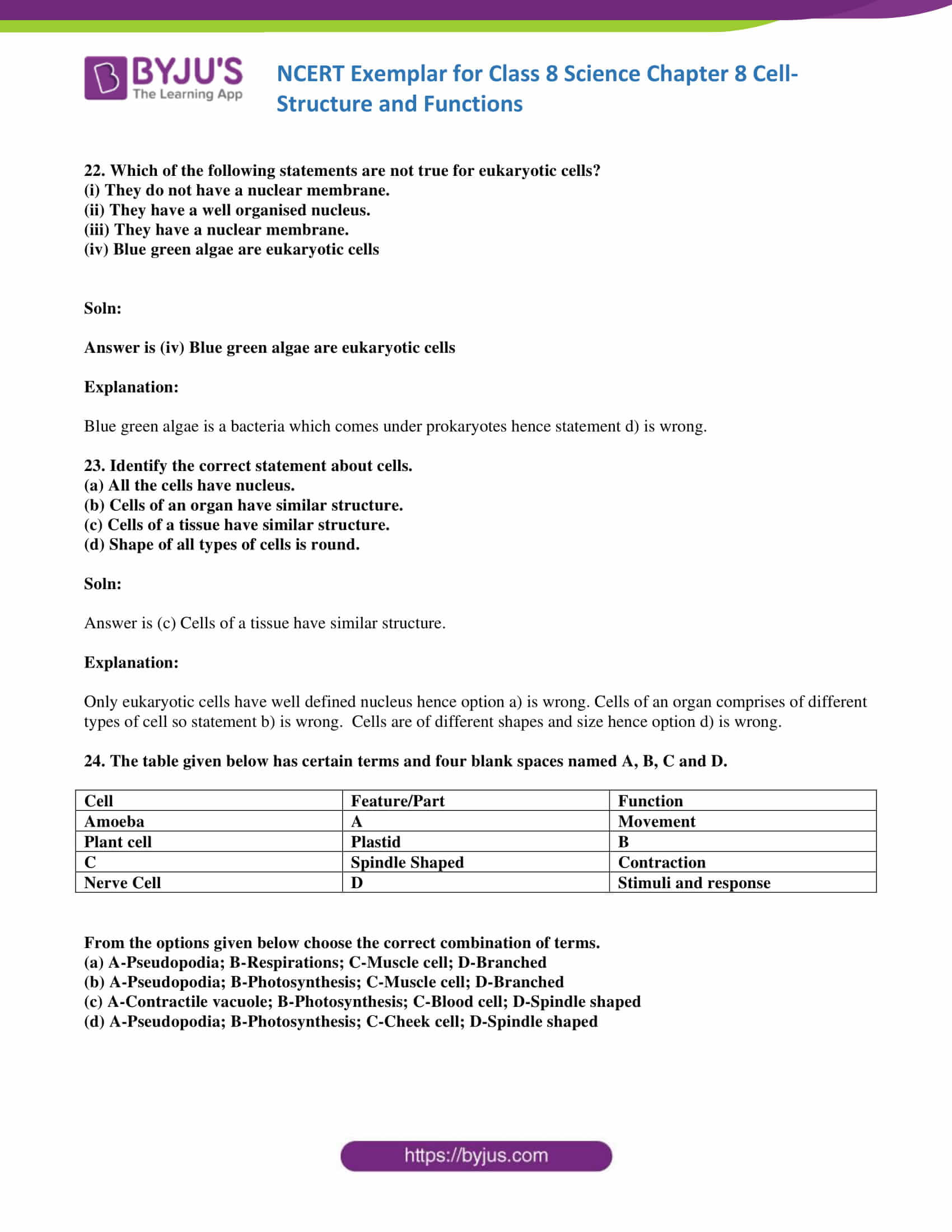 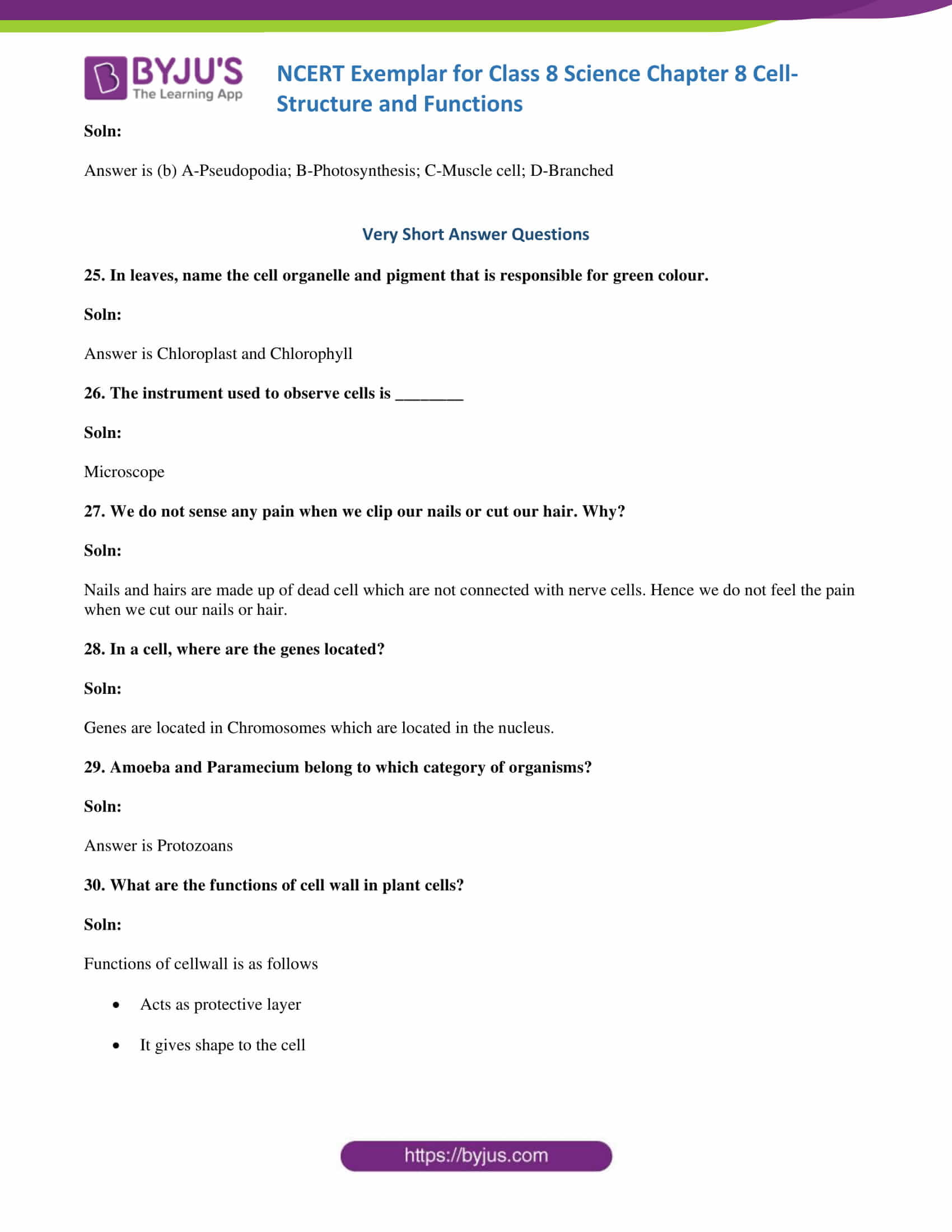 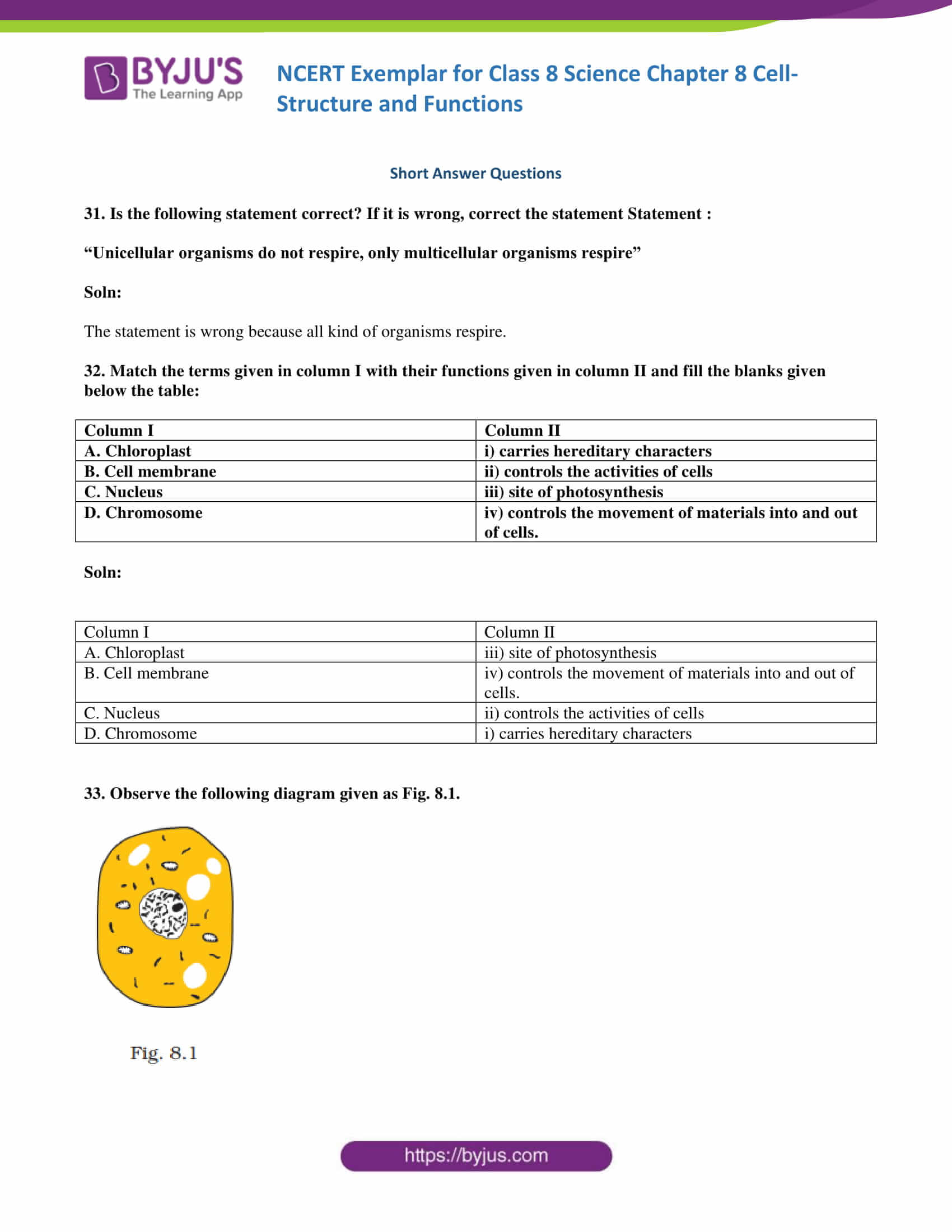 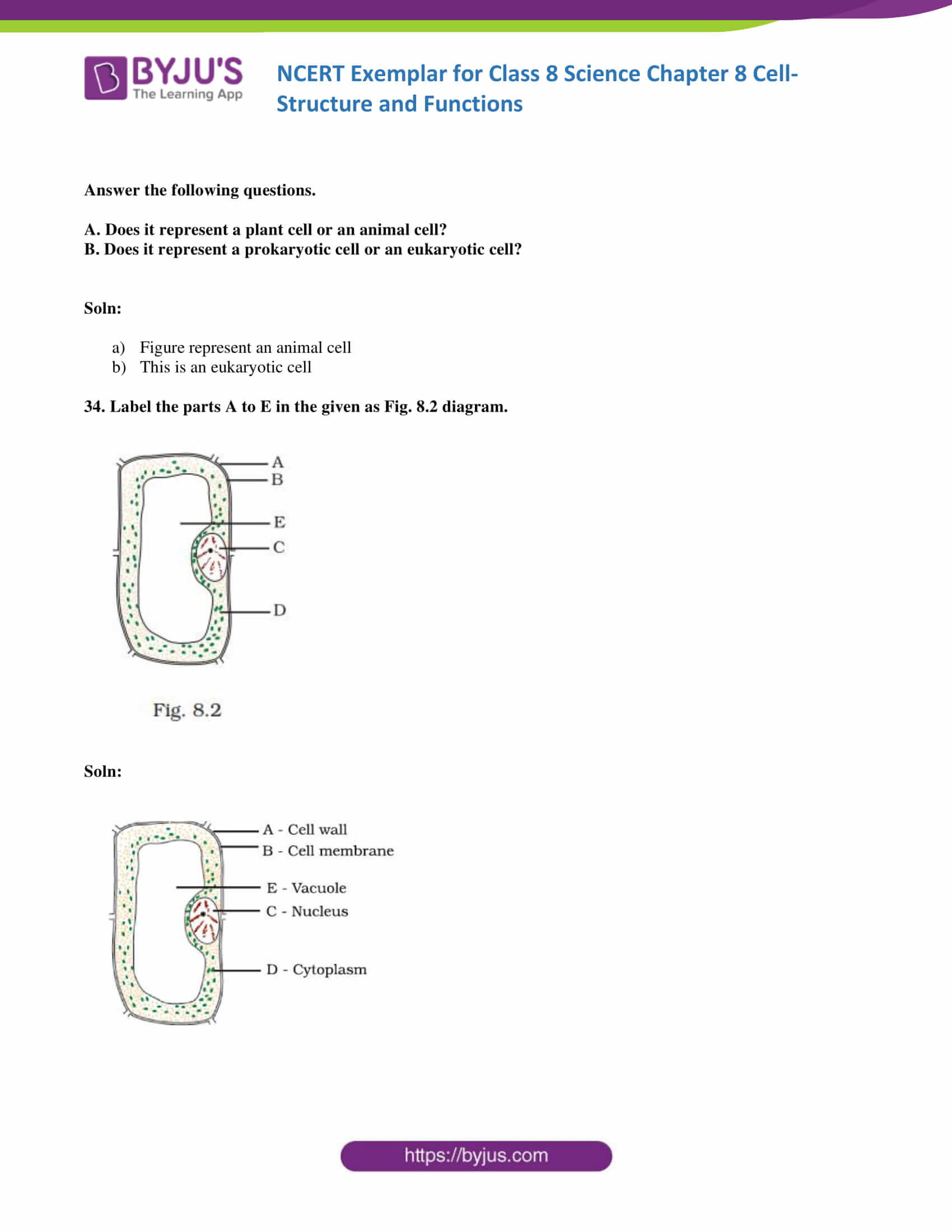 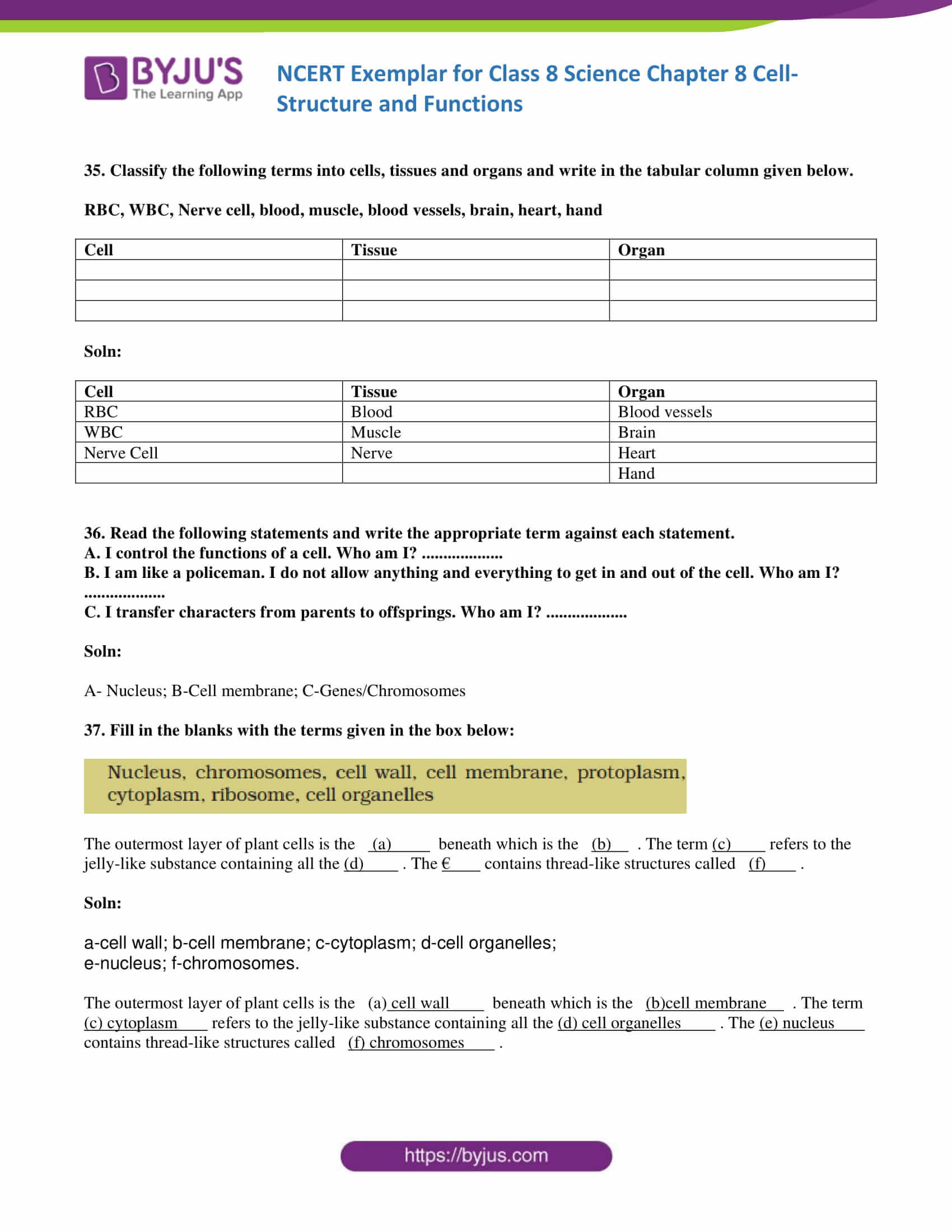 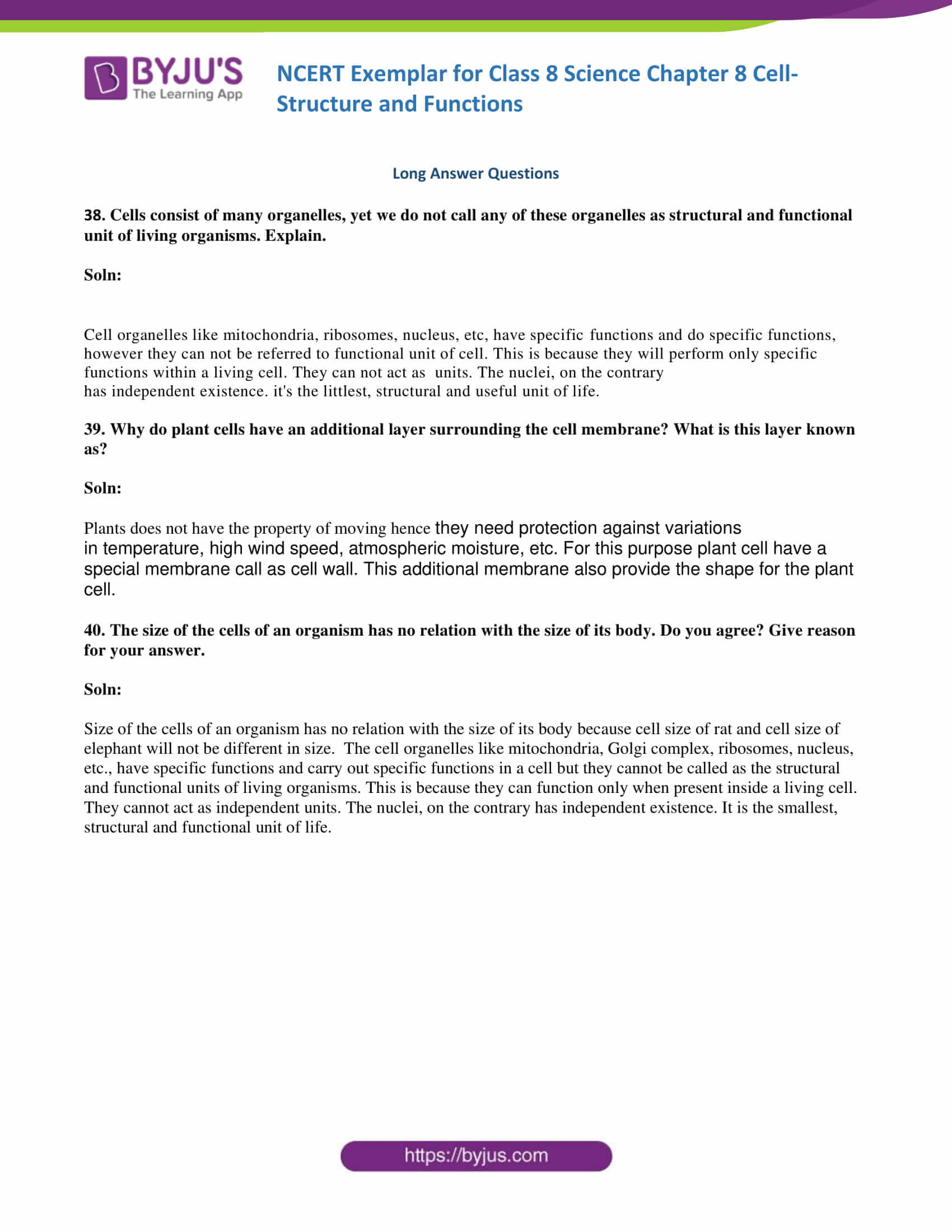 1. Choose the correct statement with respect to unicellular organisms:

(a) in unicellular organisms, tissues work in co-ordination to perform different functions.

(b) unicellular organisms do not require food.

Unicellular are single-celled organisms where single cell performs basic functions such as respiration, digestion and reproduction. Option a) is wrong because tissues are a group of cells in unicellular there will be only one cell. Option b) is wrong because organisms require food for their survival like any other organisms. Different unicellular uses different organism for locomotion Ex: Cilia, Pseudopodia.

2. Majority of cells cannot be seen directly with our naked eyes because:

(a) organisms are generally unicellular

(b) cells are microscopic

(c) cells are present only inside the body

(d) cells are grouped into tissues

Answer is (b) cells are microscopic

Cells are basic unit if life whose size is very small to be seen by our naked eye. Cell varies from nanometer to micrometre which requires a microscope to visualize. Hence they are called microscopic structures.

The correct combination of terms with reference to an animal cell is _____.

Option a) and b) are wrong because they have a cell wall which is present only in plant cells. Option d) is wrong because it has chloroplast which is absent in animal cells. Hence the answer is c)

4. Which one of the following term is not a part of the nucleus?

Answer is (a) ribosome

5. A suitable term for the various components of cells is

Answer is (b) cell organelles

The tissue is a group of cells which work together to perform a certain function. Chromosomes are thread-like structure present in the nucleus which constitutes all the genes. Gene is a unit of inheritance in living organisms. It controls the transfer of a hereditary characteristic from parents to offspring. Genes are made of DNA.

6. The jelly-like fluid substance present in cells is called

It is the jelly-like substance present between the cell membrane and the nucleus. Various other components, or organelles, of cells are present in the cytoplasm. These are mitochondria, Golgi bodies, ribosomes, etc.

7. Read the following pairs of examples of organisms:

(a) moss and sponge

(b) yeast and Amoeba

(c) bacteria and a blue-green alga

The pair that belongs to the group prokaryotes is_____

Answer is (c) bacteria and a blue-green alga

Prokaryotes are the organism which lacks a true nucleus and cell organelles. Other options provided are contained eukaryotes hence answer is c)

8. Read the following terms and select the pair that is related to the inheritance of characters.

(a) cell wall and cell membrane

(b) chromosome and mitochondria

Answer is (d) chromosome and genes

Chromosomes and gene are responsible for the inheritance of characters. Chromosomes are present in the nucleus. Genes are the parts of chromosomes which consist of DNA.

(a) Genes are located in the chromosomes.

(b) The cell is located in the nucleus.

(c) Chromosomes are located in the nucleolus.

Answer is (a) Genes are located in the chromosomes.

10. The green colour of leaves is due to presence of the pigment_____

Answer is (a) chlorophyll

11. The unit of measurement used for expressing dimension (size) of cells is:

12. The most important function of the cell membrane is that it:

(a) controls the entry and exit of materials from cells.

(b) controls only the entry of materials into cells.

(c) controls only the exit of materials from cells.

(d) allows entry and exit of materials without any control.

Answer is (a) controls the entry and exit of materials from cells.

Cell membrane facilitates entry and exit of material from cells. The cell membrane also provides shapes to the cells.

13. Paheli accidentally placed her hand over a flame and immediately pulled it back. She felt the sensation of heat and reacted due to the action of

Paheli felt the sensation of heat and reacted due to the response to the stimulus by the nerve cells. Nerve cell are specialized cells, which receives and transmits signals from one part to other cells that react to stimuli by generating signals through the axons

14. Which of the following cell organelle is found in all plant cells, animal cells and also in bacterial cells?

Chloroplast and cell wall present only in plant cells. The nucleus is absent in bacterial cell, therefore, the answer is (c) cell membrane.

15. The thread-like structures present in the nucleus are

Answer is (b) chromosomes

The nucleolus is a spherical body present on the nucleus. Genes are present on chromosomes which help in inheritance or transfer of characters from the parents to the offspring. Ribosomes are present in the cytoplasm. Hence the answer is (b) chromosomes.

16. Identify the statement which is true for cells.

(a) Cells can be easily seen with naked eyes.

(c) A single cell can perform all the functions in a unicellular organism.

Answer is (c) A single cell can perform all the functions in a unicellular organism.

Cells can only be seen with microscopes hence option a) is wrong. Insect’s egg is a cell so option b) is wrong. Cells in multicellular organism are in different size and shape therefore option d) is wrong.

17. Which of the following is not a cell?

The virus is considered as intermediate between living and non-living. It is not considered as cell because it cannot replicate or perform life processes outside the host cell.

18. Which of the following feature will help you in distinguishing a plant cell from an animal cell?

Answer is (a) cell wall

The cell wall is present only in plant cell whereas cell wall, mitochondria and nucleus are present in both plant and animal cells. Hence cell wall help in distinguishing a plant cell from an animal cell.

19. Under a microscope Paheli observes a cell that has a cell wall but no distinct nucleus. The cell that she observes is

(b) an animal cell

Answer is (d) a bacterial cell

Bacterial cell is a prokaryote and it lacks a distinct nucleus and cell organelles. Hence the answer is (d) a bacterial cell.

(a) Tissue is a group of dissimilar cells.

(b) An organ consists of similar cells.

(c) Vacuoles are not found in plant cells.

(d) Prokaryotes do not have a nucleus.

Answer is (d) Prokaryotes do not have a nucleus.

Prokaryotes are the organism which lack a true nucleus and cell organelles.

22. Which of the following statements are not true for eukaryotic cells?

(i) They do not have a nuclear membrane.

(ii) They have a well-organised nucleus.

(iii) They have a nuclear membrane.

Blue-green algae is a bacteria which comes under prokaryotes hence statement d) is wrong.

23. Identify the correct statement about cells.

(a) All the cells have nucleus.

(b) Cells of an organ have similar structure.

(c) Cells of tissue have a similar structure.

(d) The shape of all types of cells is round.

Answer is (c) Cells of tissue have a similar structure.

24. The table given below has certain terms and four blank spaces named A, B, C and D.

From the options given below choose the correct combination of terms.

(a) The pseudopods are used by Amoeba for movement and as a tool to capture prey.

(b) Plastids are major organelles found in the plant cells, which contain chlorophyll can carry out photosynthesis.

(c) Muscle are spindle-shaped cells, which are involved in contraction and relaxation.

(d) Nerve cells are long, branched and active component of the nervous system, which functions by responding to stimuli.

25. In leaves, name the cell organelle and pigment that is responsible for green colour.

Answer is Chloroplast and Chlorophyll

27. We do not sense any pain when we clip our nails or cut our hair. Why?

Nails and hairs are made up of dead cells, which is not connected with nerve cells. Hence we do not feel the pain when we cut our nails or hair.

Genes are located in Chromosomes present within the nucleus.

29. Amoeba and Paramecium belong to which category of organisms?

30. What are the functions of the cell wall in plant cells?

Functions of cell-wall are as follows

31. Is the following statement correct? If it is wrong, correct the statement Statement :

The statement is wrong because all kind of living organisms respire and undergo respiration process.

A. Does it represent a plant cell or an animal cell? 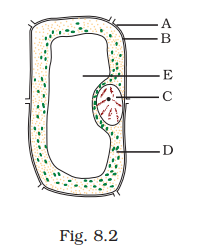 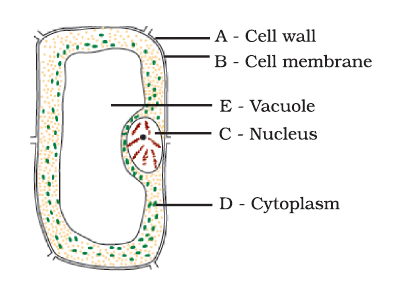 35. Classify the following terms into cells, tissues and organs and write in the tabular column given below.

36. Read the following statements and write the appropriate term against each statement.

C. I transfer characters from parents to offsprings. Who am I? ……………….

37. Fill in the blanks with the terms given in the box below:

The outermost layer of plant cells is the (a) beneath which is the (b). The term (c) refers to the jelly-like substance containing all the (d). The (e) contains thread-like structures called (f).

The outermost layer of plant cells is the (a) cell wall beneath which is the (b)cell membrane. The term (c) cytoplasm refers to the jelly-like substance containing all the (d) cell organelles. The (e) nucleus contains thread-like structures called (f) chromosomes.

38. Cells consist of many organelles, yet we do not call any of these organelles as a structural and functional unit of living organisms. Explain.

39. Why do plant cells have an additional layer surrounding the cell membrane? What is this layer known as?

Plants do not have the property of moving, hence they need protection against variations in temperature, high wind speed, atmospheric moisture, etc. For this purpose, a plant cell has a special membrane call as the cell wall. This additional membrane also provides the shape for the plant cell.

40. The size of the cells of an organism has no relation with the size of its body. Do you agree? Give the reason for your answer.

Size of the cells of an organism has no relation with the size of its body because the cell size of a rat and cell size of an elephant will not be different in size. The cell organelles like mitochondria, Golgi complex, ribosomes, nucleus, etc., have specific functions and carry out specific functions in a cell but they cannot be called as the structural and functional units of living organisms. This is because they can function only when present inside a living cell. They cannot act as independent units. The nuclei, on the contrary, has an independent existence. It is the smallest, structural and functional unit of life.

BYJU’S is committed to providing the best study materials, CBSE notes and has resources that can make your learning interesting and interactive. BYJU’S videos and animation help you in remembering the topic for a long period and this helps you in scoring good marks in Class 8 examination and entrance examinations.

Why do plant cells have an additional layer surrounding the cell membrane?

Plants do not have the property of moving hence they need protection against variations
in temperature, high wind speed, atmospheric moisture, etc. For this purpose, a plant cell has a special membrane call as the cell wall. This additional membrane also provides the shape for the plant cell.

What are the functions of the cell wall in plant cells?

1) Acts as a protective layer

2) It gives shape to the cell

Which category do amoeba and paramecium belong too?

Which of the following feature will help you in distinguishing a plant cell from an animal cell?