Students have already studied about the solar system in the 6th standard. In Class 8 students will learn more about celestial objects like the moon, stars, constellations, sun, and planets. Learning about our solar system is very important because the outer space is perhaps the final frontier for humanity. To understand the chapter and to score good marks in the exam. Solve questions from the NCERT Exemplar Solutions Class 8 Science Chapter 17 Stars and the Solar System. 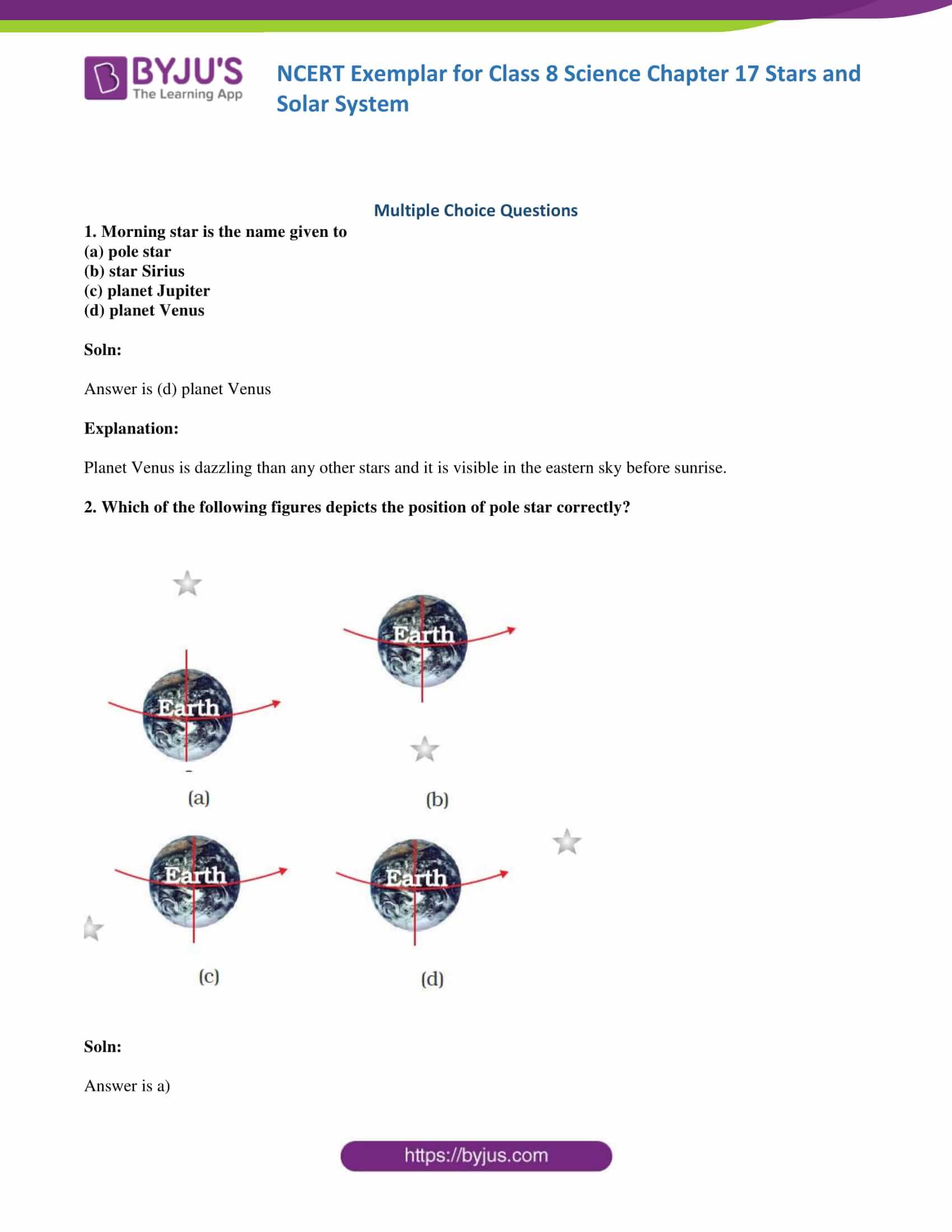 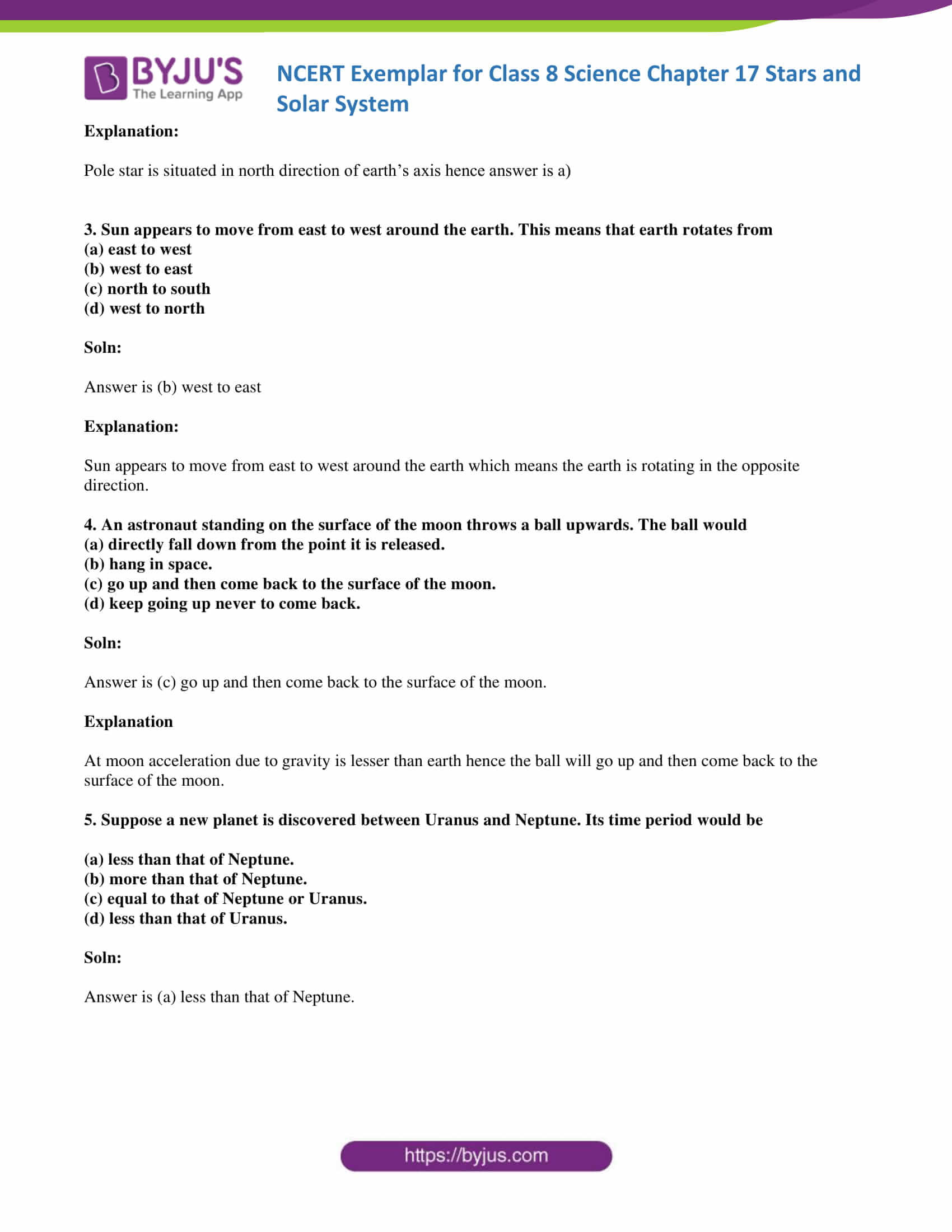 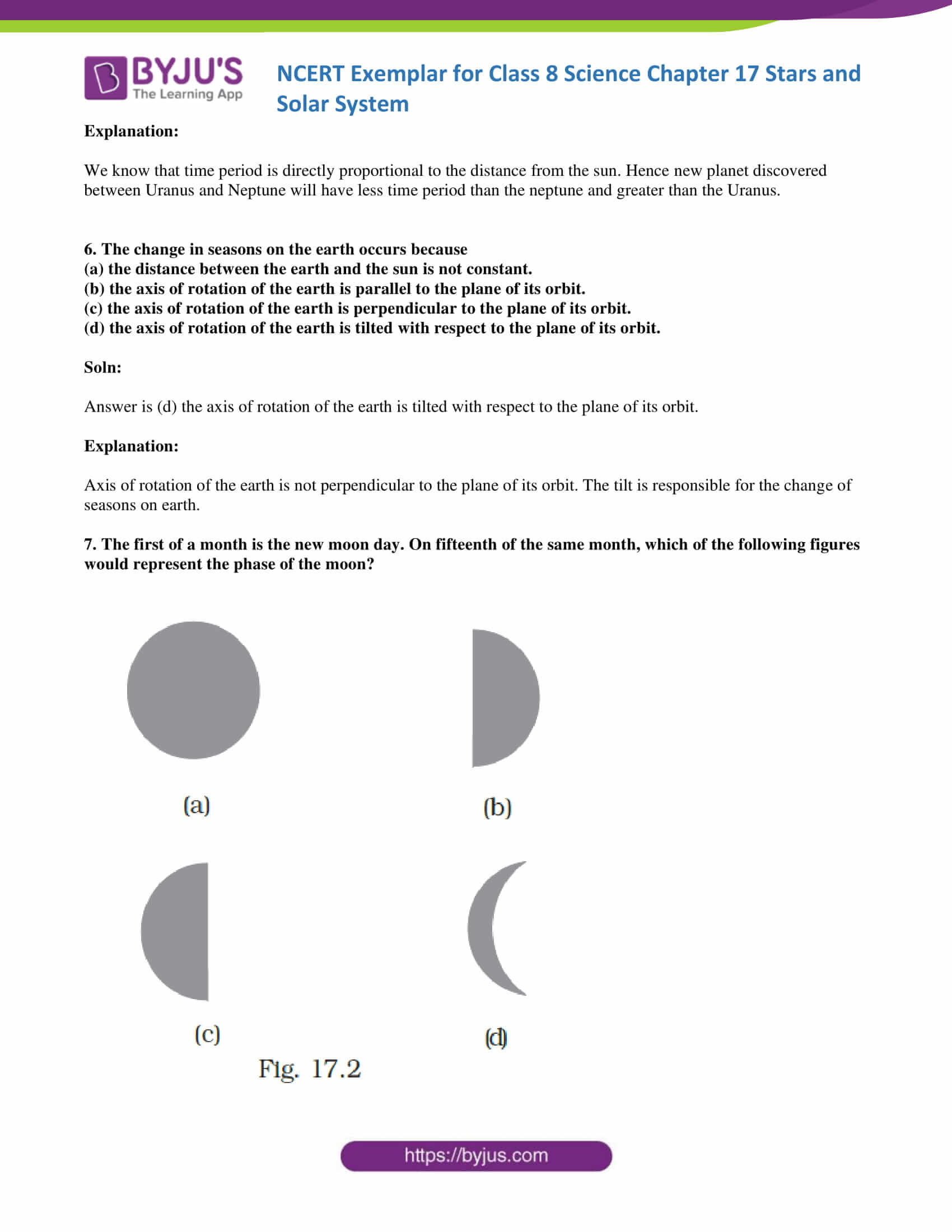 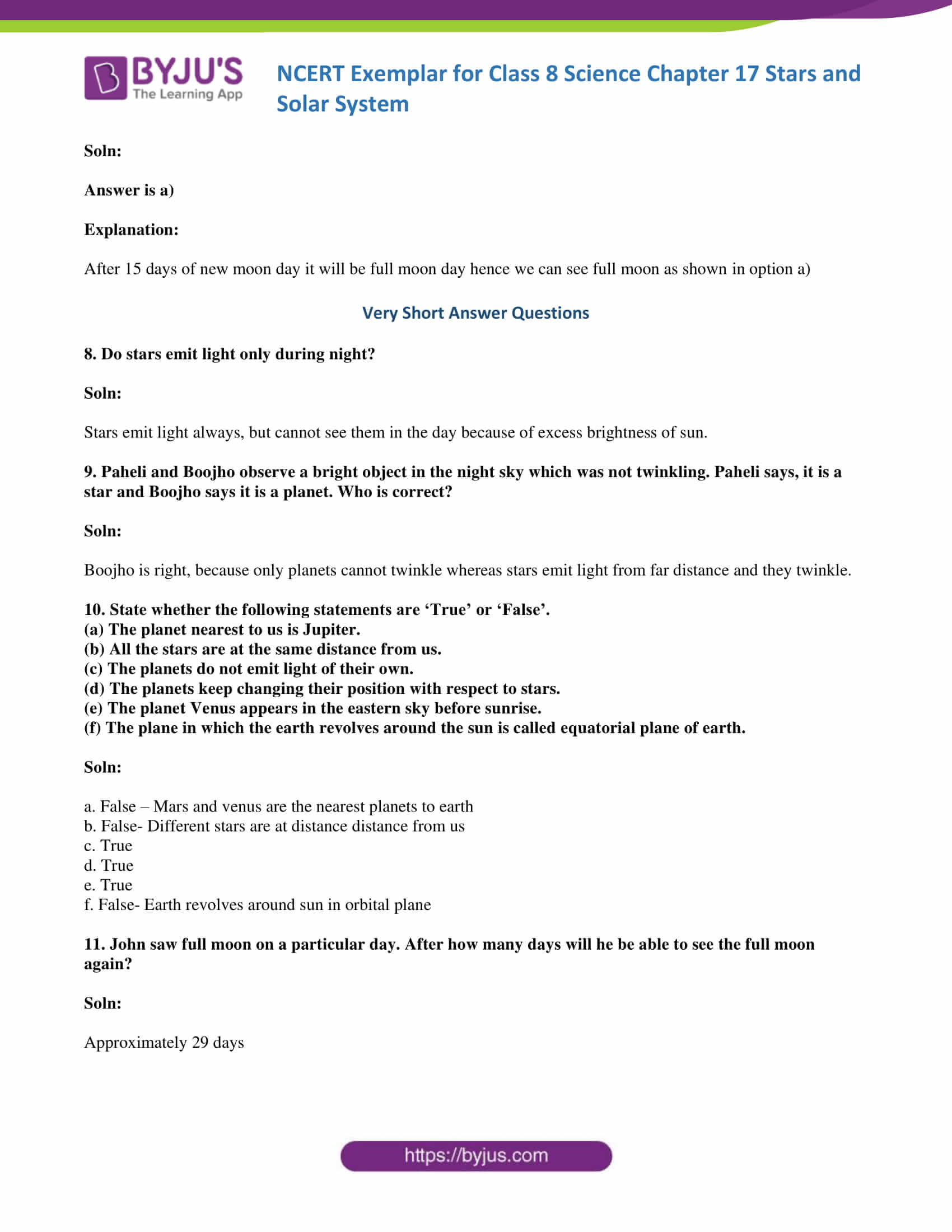 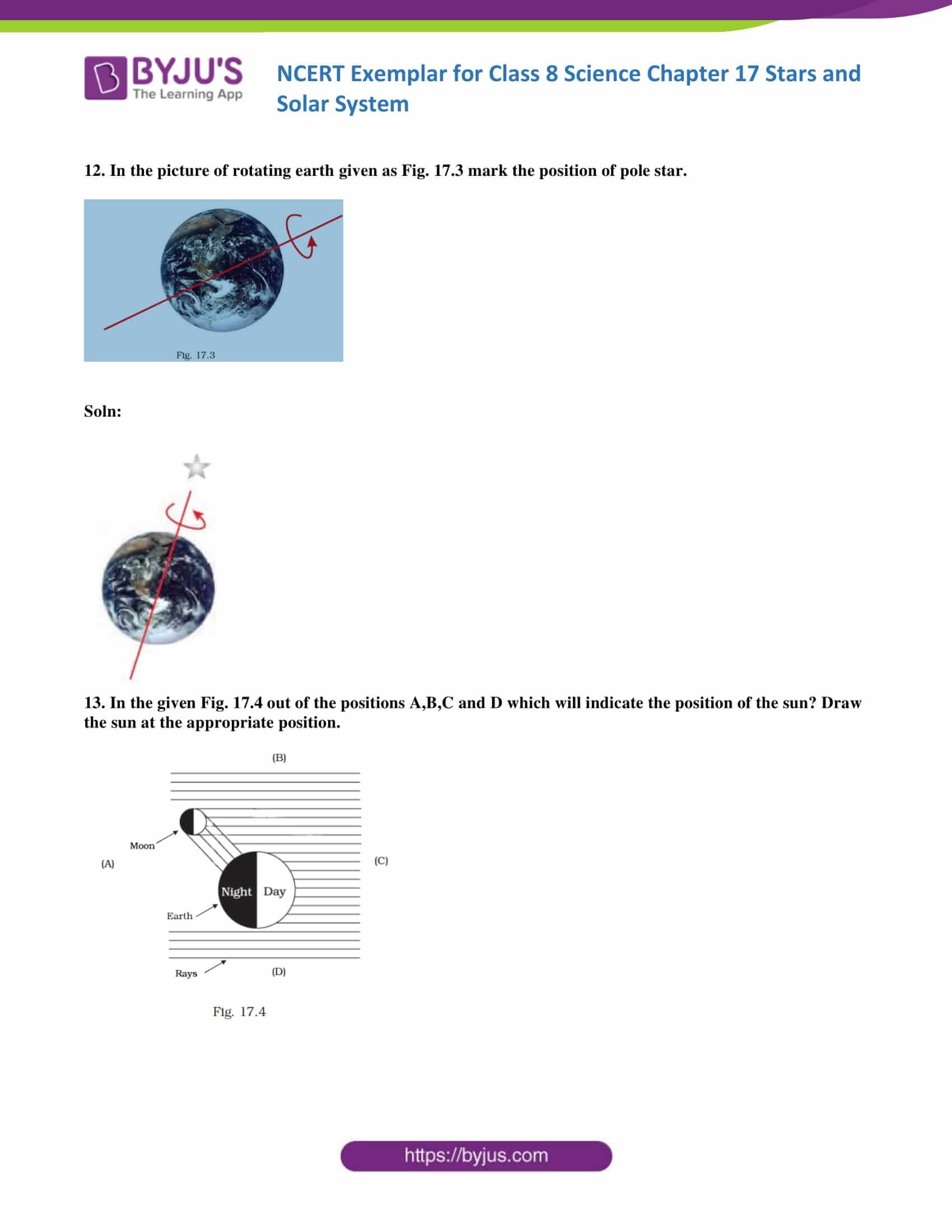 1. Morning star is the name given to

The answer is (d) planet, Venus.

Planet Venus is dazzling than any other stars and it is visible in the eastern sky before sunrise.

2. Which of the following figures depicts the position of pole star correctly? 3. Sun appears to move from east to west around the earth. This means that earth rotates from

The answer is (b) west to east

Sun appears to move from east to west around the earth which means the earth is rotating in the opposite direction.

4. An astronaut standing on the surface of the moon throws a ball upwards. The ball would

(a) directly fall down from the point it is released.

(c) go up and then come back to the surface of the moon.

(d) keep going up never to come back.

Answer is (c) go up and then come back to the surface of the moon.

At moon acceleration due to gravity is lesser than earth hence the ball will go up and then come back to the surface of the moon.

5. Suppose a new planet is discovered between Uranus and Neptune. Its time period would be

(a) less than that of Neptune.

(b) more than that of Neptune.

(c) equal to that of Neptune or Uranus.

(d) less than that of Uranus.

Answer is (a) less than that of Neptune.

We know that the time period is directly proportional to the distance from the sun. Hence a new planet discovered between Uranus and Neptune will have less time period than the Neptune and greater than the Uranus.

6. The change in seasons on the earth occurs because

(a) the distance between the earth and the sun is not constant.

(b) the axis of rotation of the earth is parallel to the plane of its orbit.

(c) the axis of rotation of the earth is perpendicular to the plane of its orbit.

(d) the axis of rotation of the earth is tilted with respect to the plane of its orbit.

The answer is (d) the axis of rotation of the earth is tilted with respect to the plane of its orbit.

Axis of rotation of the earth is not perpendicular to the plane of its orbit. The tilt is responsible for the change of seasons on earth.

7. The first of a month is the new moon day. On fifteenth of the same month, which of the following figures would represent the phase of the moon? 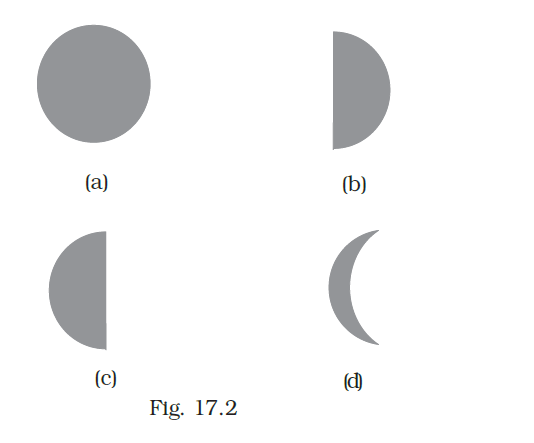 8. Do stars emit light only during night?

Stars emit light always, but cannot see them in the day because of the excessive brightness of the sun.

9. Paheli and Boojho observe a bright object in the night sky which was not twinkling. Paheli says, it is a star and Boojho says it is a planet. Who is correct?

Boojho is right because only planets cannot twinkle whereas stars emit light from a far distance and they twinkle.

10. State whether the following statements are ‘True’ or ‘False’.

(a) The planet nearest to us is Jupiter.

(b) All the stars are at the same distance from us.

(c) The planets do not emit light of their own.

(d) The planets keep changing their position with respect to stars.

(e) The planet Venus appears in the eastern sky before sunrise.

(f) The plane in which the earth revolves around the sun is called the equatorial plane of earth.

a. False – Mars and venus are the nearest planets to earth

b. False- Different stars are at distance from us

f. False- Earth revolves around the sun in the orbital plane

12. In the picture of rotating earth given as Fig. 17.3 mark the position of the pole star. 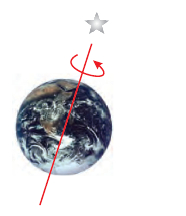 13. In the given Fig. 17.4 out of the positions A, B, C and D which will indicate the position of the sun? Draw the sun at the appropriate position. 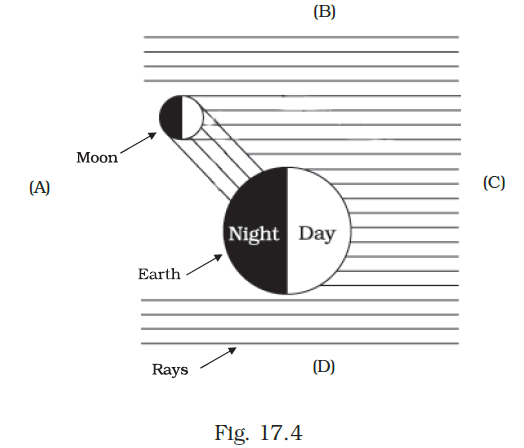 15. A star is ten light-years away from the earth. Suppose it brightens up suddenly today. After how much time shall we see this change?

We will see the change after 10 years.

16. Meteors are not visible during the daytime. Explain the reason.

17. Why does the moon change its shape daily?

We see only that part of the moon from which the light of the sun is reflected towards us. Hence the moon changes its shape daily.

18. Paheli saw the moon through a glass window at 8:00 p.m. She marked the position of the moon on the glass pane. She got up at 4 a.m. in the morning. Will the moon be visible at the same position?

No, Because the position of the moon keeps changing during night.

19. Suppose the moon emits light of its own. Would it still have phases? Justify your answer

As the moon does not emit its own light and reflects the light of the sun. phases are seen. Because of the revolution of earth, reflection of different intensities of light fall on the moon. Because of this moon glows continuously forming phases.

20. Fig. 17.6 shows comets without their tail. Show the tails of the comets at position A, B, and C. In which position will the tail be longest? 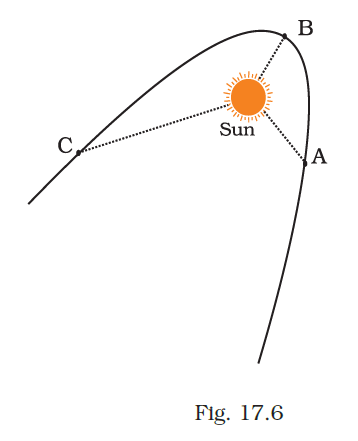 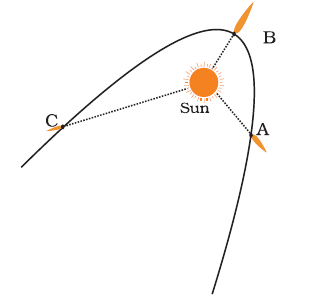 The tail will be longest at position B.

21. Explain why we always see the same side of the moon.

We always see the same side of the moon because the moon’s period of revolution around the earth is equal to the period of rotation of the moon on its axis. Hence we can only the side that faces us. Look at Fig. 17.7 carefully and answer the following question:

(a) In which part of the sky would you see the full moon in the evening?

(b) In which part of the sky would you see the crescent moon in the evening?

(a) We see the full moon in the evening in the eastern part of the sky.

(b) We see the crescent moon in the evening in the western part of the sky. 24. Suppose the distance between earth and sun becomes half of its present distance. What is likely to happen to life?

Life may no longer exist because some special environmental conditions are needed for the existence and continuation of life on the earth. The right distance of the earth from the Sun is necessary so that it has the right temperature range, the presence of water and a suitable atmosphere and a blanket of ozone.

25. Explain with a diagram of how you can locate pole star with the help of the constellation Great Bear (Ursa Major).

Locate the two end stars of Ursa Major. Imagine a straight line passing through these stars as shown in the figure below. Extend this imaginary line towards the north direction. This line will

lead to a star which is not too bright. This is a pole star. What will I learn from the Chapter 17 of NCERT Exemplar Solutions for Class 8 Science?

Topics covers in Chapter 17 of NCERT Exemplar Solutions for Class 8 Science are –
1. The Moon
2. The Stars
3. Constellations
4. The Solar System.

Why should I download the BYJU’S NCERT Exemplar Solutions for Class 8 Science Chapter 17 PDF?

1. The NCERT Exemplar Solutions contain easy to understand language to help students score high marks in the board exams.
2. The solutions will be helpful not only for the board exams, but also for various competitive exams and science olympiads.
3. The fully resolved solutions clears doubts of students from the NCERT Exemplar textbooks.
4. The subject experts design the solutions with accurate and genuine information to improve confidence among students.
5. The detailed answers to all the questions help students with their board exam preparation.

How to answer difficult questions regarding the Chapter 17 of NCERT Exemplar Solutions for Class 8 Science?

To solve complicated questions, students must first be focused on learning the fundamental concepts. Top priority should be given to core sections more than the other areas. Clear knowledge regarding the chapter not only helps students to solve the questions but also helps them to implement new ideas in the future. Students who aspire to opt this subject in higher education must have a clear idea about concepts like the moon, the stars, constellations and the solar system.
Also, Read