Reaching the age of adolescence is one of the most important chapters of Biology. In this chapter, the students will learn about different changes that will occur in their puberty like an increase in height, voice change, change in body shape, development of sex organs, and secondary sexual changes. To master the concepts of this chapter, students are advised to solve the questions from the NCERT Exemplar for Class 8 Chapter 10 reaching the age of adolescence. 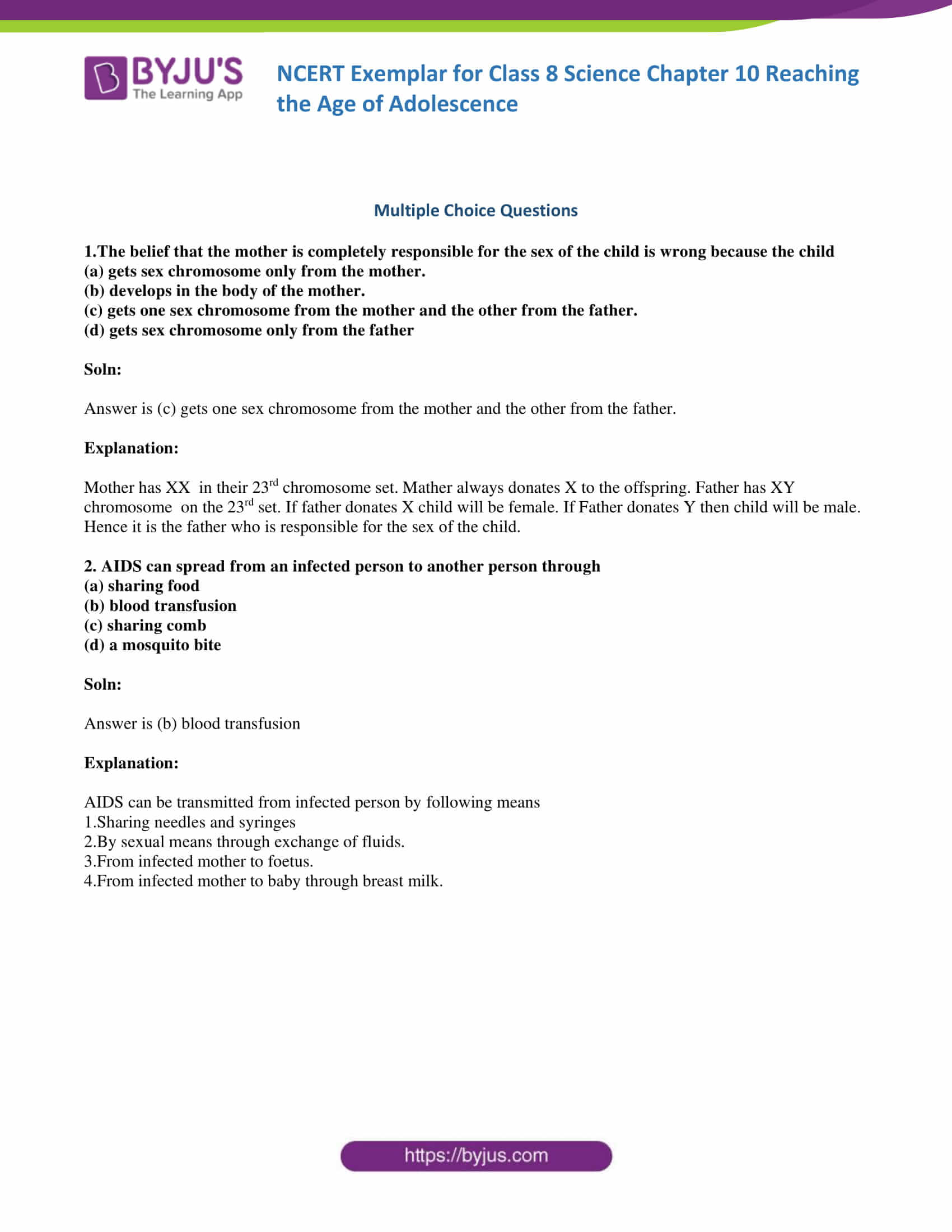 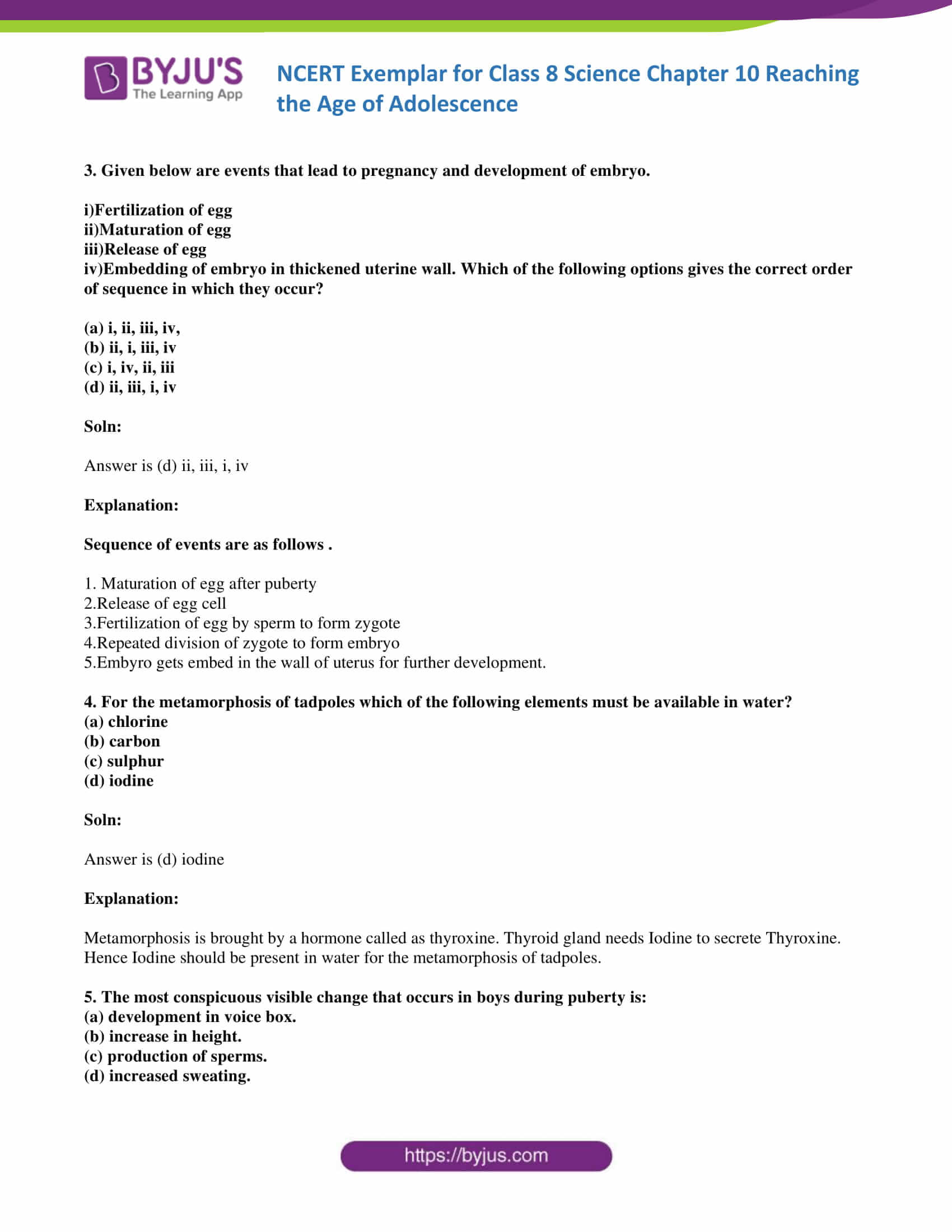 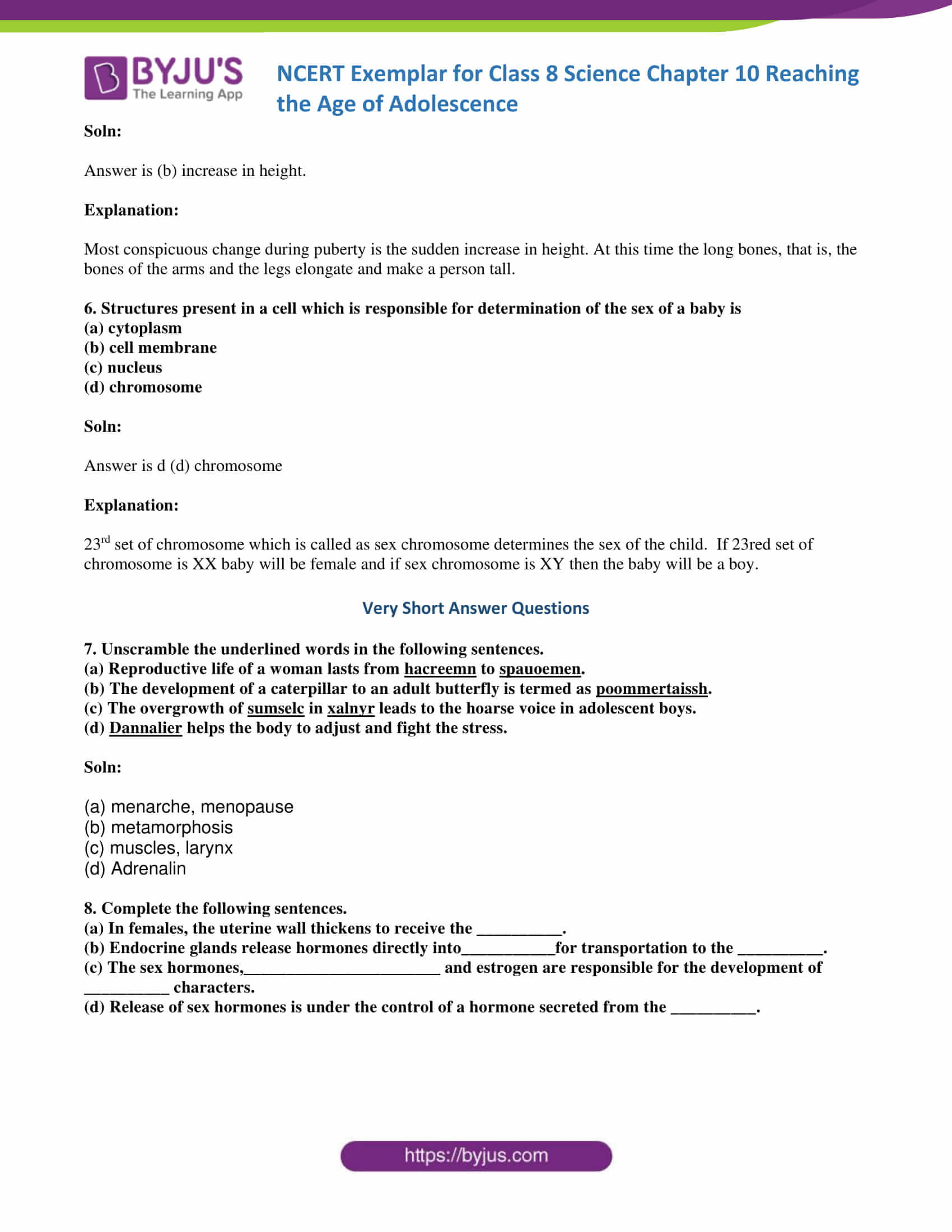 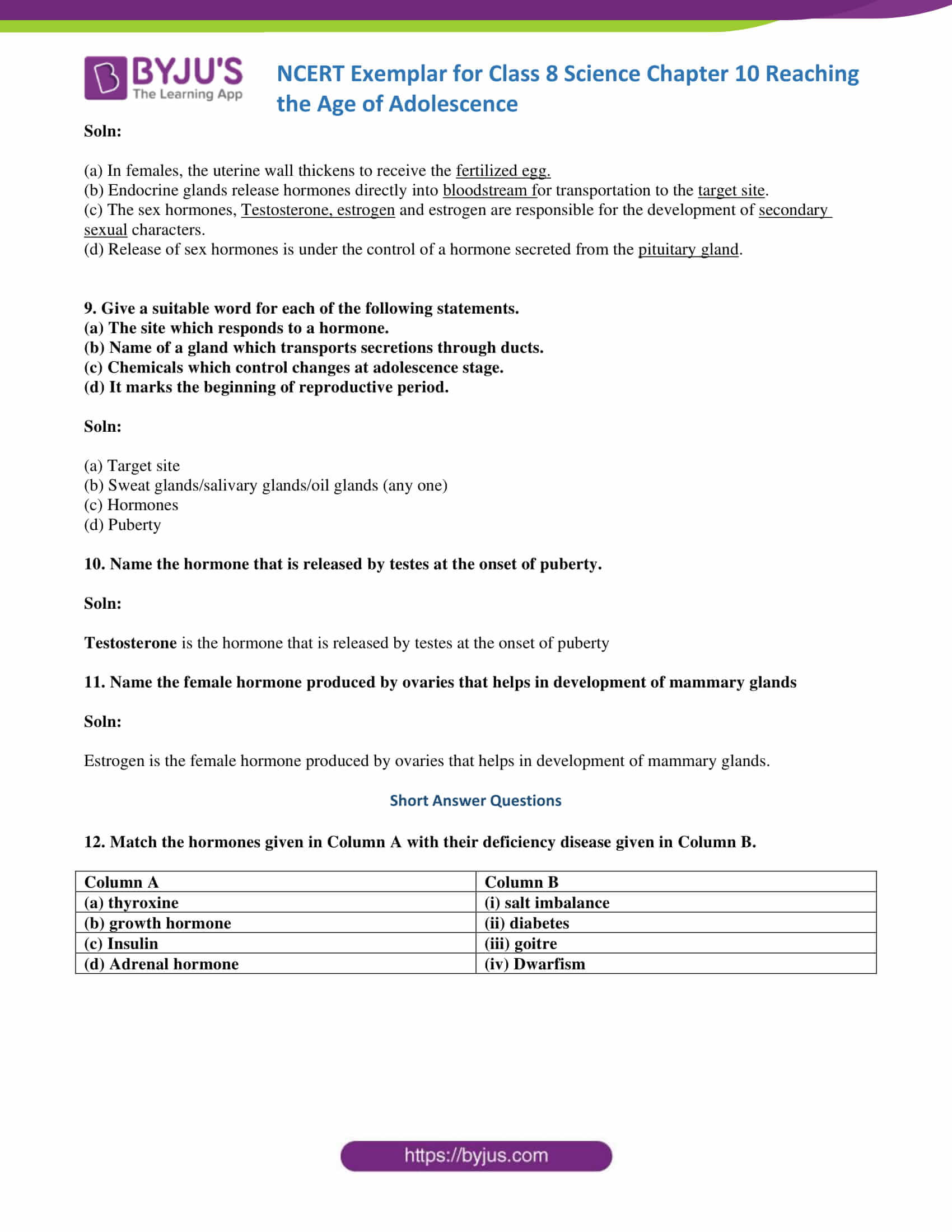 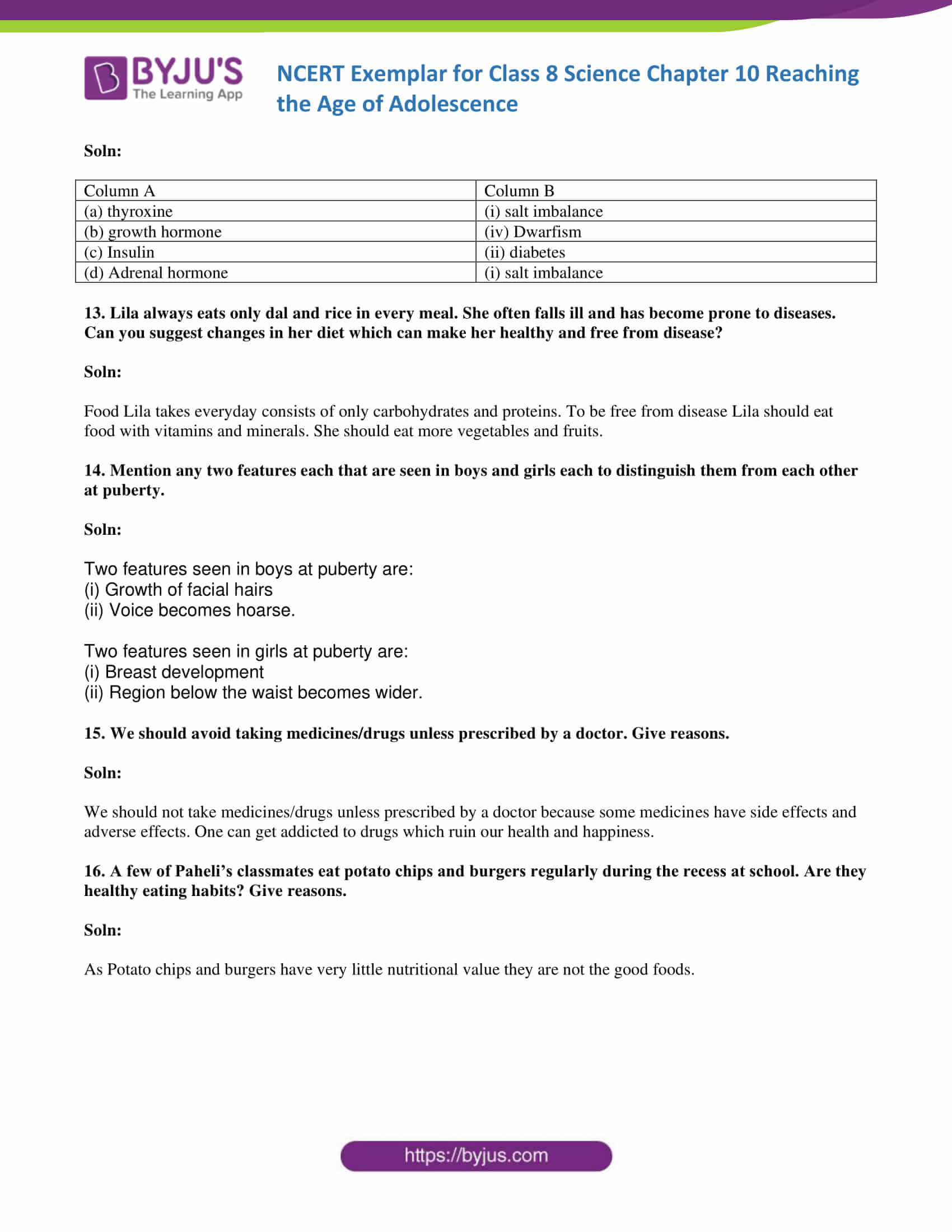 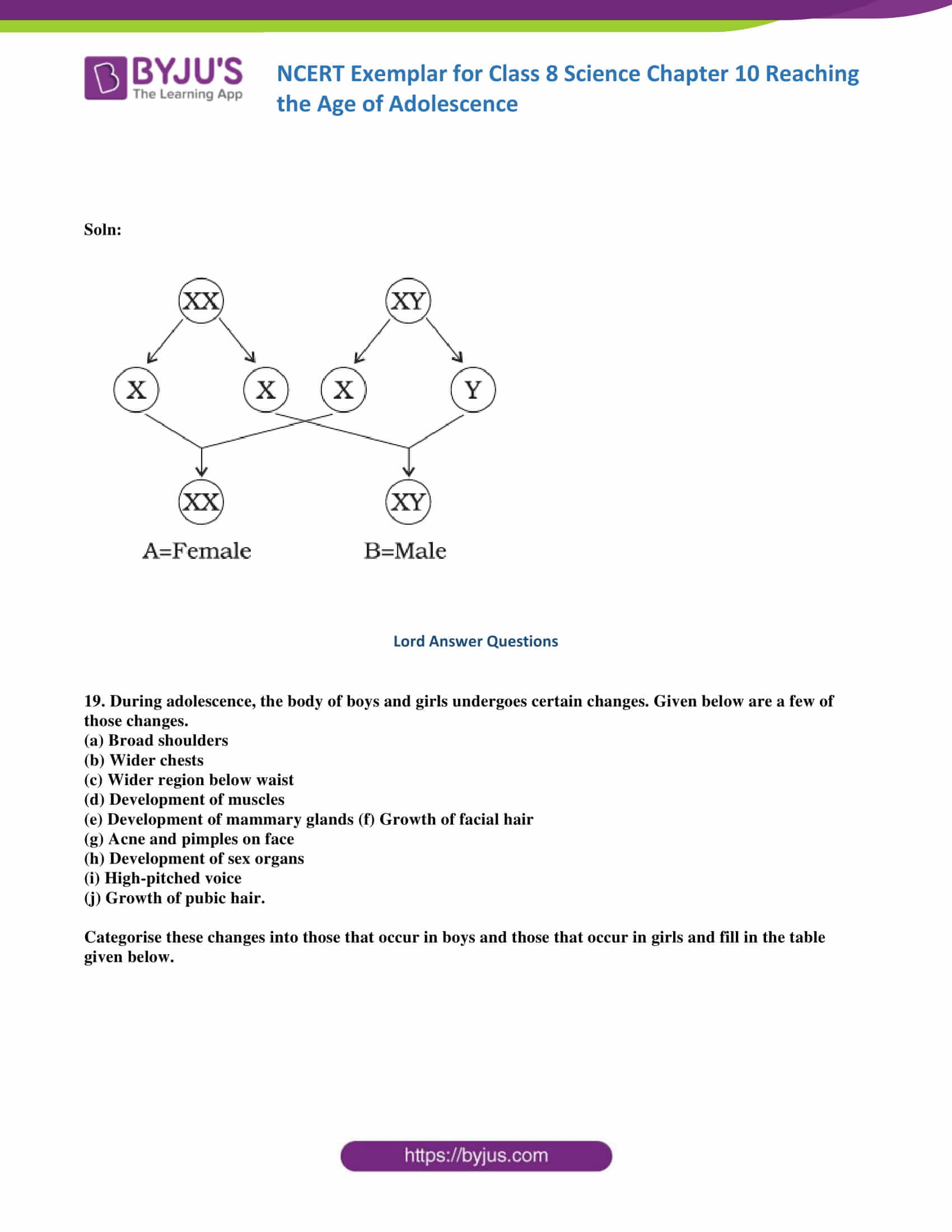 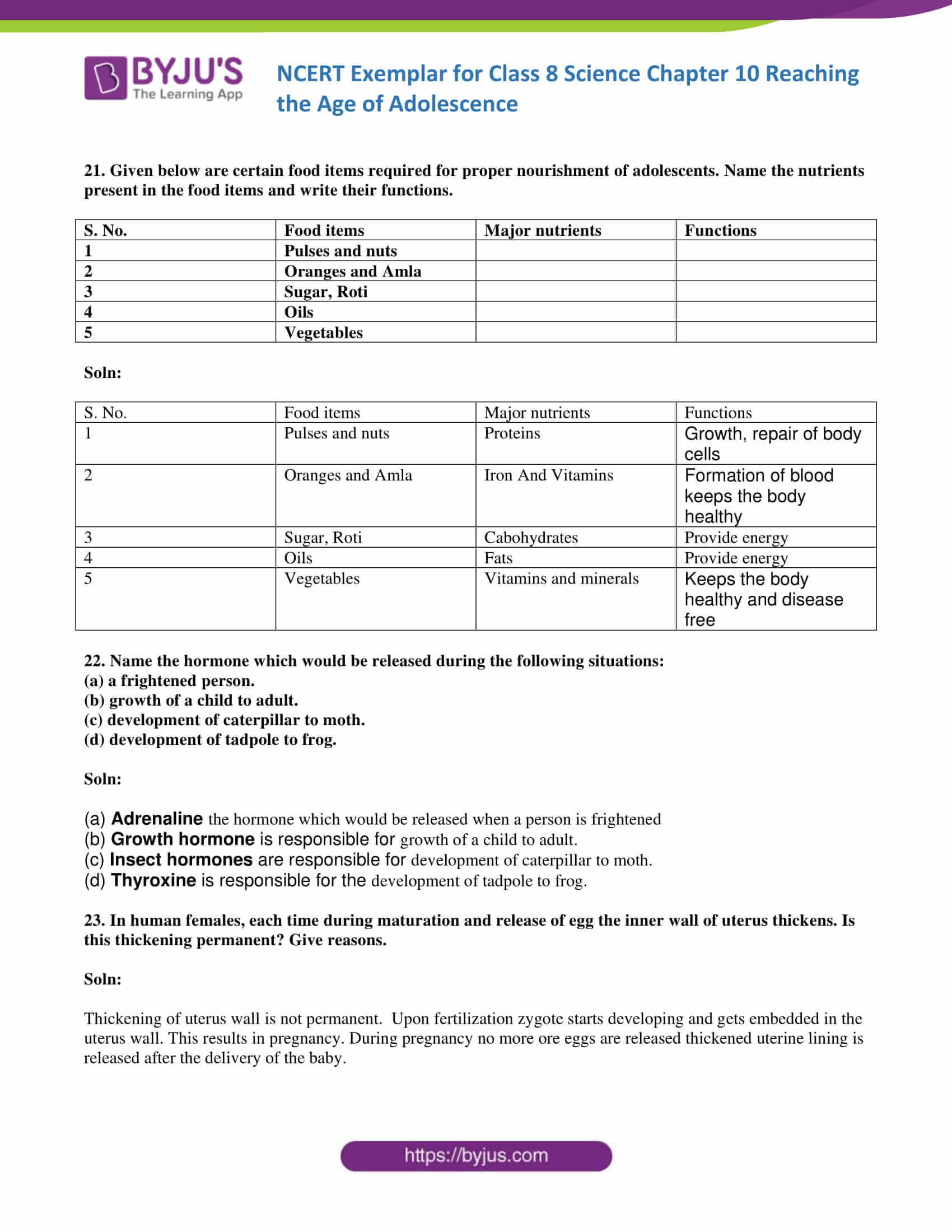 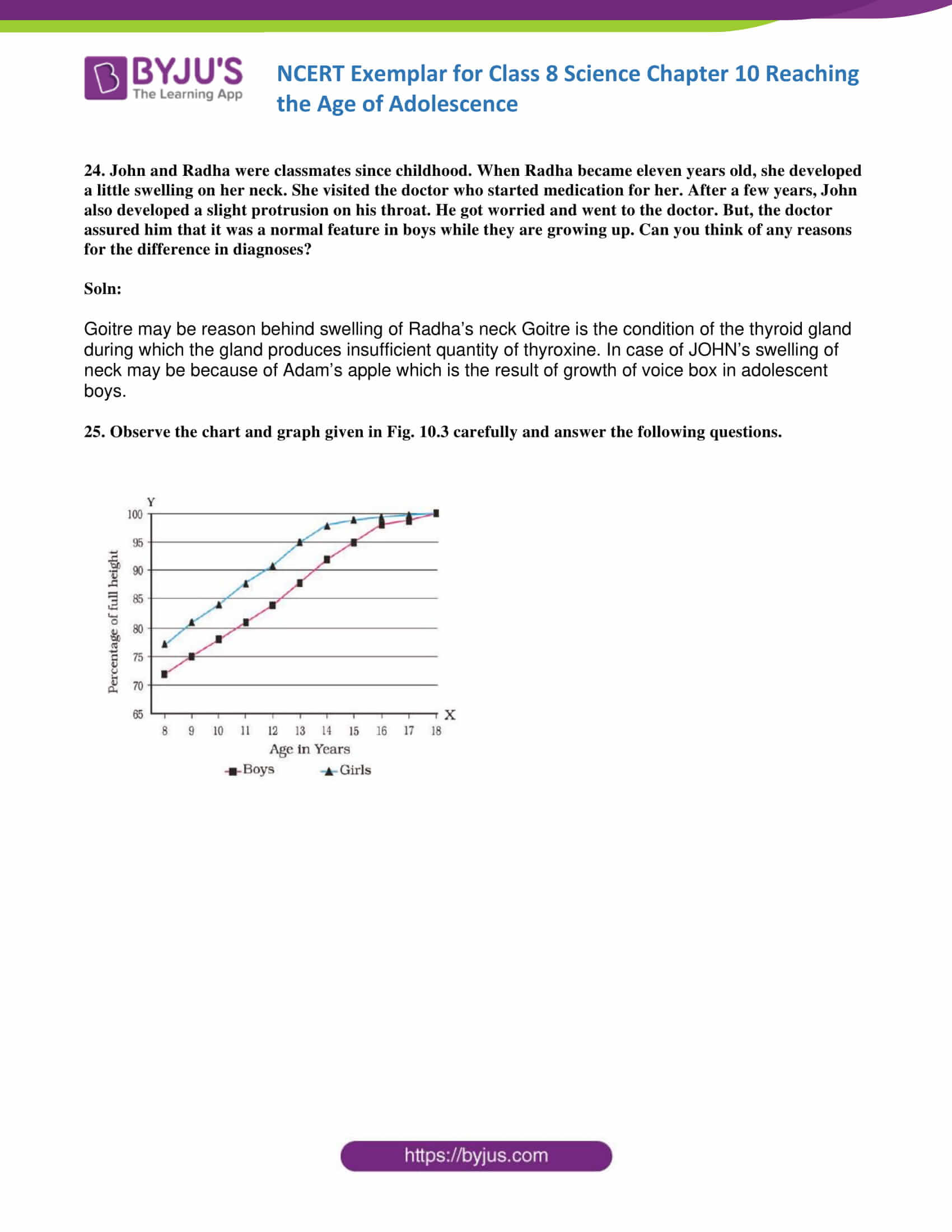 1. The belief that the mother is completely responsible for the sex of the child is wrong because the child

(a) gets sex chromosome only from the mother.

(b) develops in the body of the mother.

(c) gets one sex chromosome from the mother and the other from the father.

(d) gets sex chromosome only from the father.

Answer is (c) gets one sex chromosome from the mother and the other from the father.

2. AIDS can spread from an infected person to another person through:

The answer is (b) blood transfusion

AIDS can be transmitted from an infected person by the following means:

3. Given below are events that lead to pregnancy and development of the embryo.

iv)Embedding of the embryo in the thickened uterine wall.

Which of the following options gives the correct order of sequence in which they occur?

The sequence of events is as follows:

1. Maturation of egg after puberty.

2.Release of the egg cell.

3.Fertilization of the egg by sperm to form the zygote.

4.Repeated division of zygote to form an embryo.

5. Embryo gets embedded in the wall of the uterus for further development.

4. For the metamorphosis of tadpoles which of the following elements must be available in the water?

The answer is (d) iodine

Metamorphosis is brought by a hormone called thyroxine. The thyroid gland needs Iodine to secrete Thyroxine. Hence Iodine should be present in water for the metamorphosis of tadpoles.

5. The most conspicuous visible change that occurs in boys during puberty is:

(a) development in the voice box.

(b) increase in height.

The answer is (b) increase in height.

Most conspicuous change during puberty is the sudden increase in height. At this time the long bones, that is, the bones of the arms and the legs elongate and make a person tall.

6. Structures present in a cell which is responsible for determination of the sex of a baby is

The answer is (d) chromosome

7. Unscramble the underlined words in the following sentences.

(a) Reproductive life of a woman lasts from hacreemn to spauoemen.

(b) The development of a caterpillar to an adult butterfly is termed as poommertaissh.

(c) The overgrowth of sumselc in xalnyr leads to the hoarse voice in adolescent boys.

(d) Dannalier helps the body to adjust and fight the stress.

(a) In females, the uterine wall thickens to receive the fertilized egg.

(b) Endocrine glands release hormones directly into the bloodstream for transportation to the target site.

(c) The sex hormones, Testosterone, estrogen and estrogen are responsible for the development of secondary sexual characters.

(d) Release of sex hormones is under the control of a hormone secreted from the pituitary gland.

9. Give a suitable word for each of the following statements.

(a) The site which response to a hormone.

(b) Name of a gland which transports secretions through ducts.

(c) Chemicals which control changes at the adolescence stage.

(d) It marks the beginning of the reproductive period.

10. Name the hormone that is released by testes at the onset of puberty.

11. Name the female hormone produced by ovaries that helps in the development of mammary glands

Estrogen is the female hormone produced by ovaries that helps in the development of mammary glands.

13. Lila always eats only dal and rice in every meal. She often falls ill and has become prone to diseases. Can you suggest changes in her diet which can make her healthy and free from disease?

Food Lila takes every day consists of only carbohydrates and proteins. To be free from disease Lila should eat food with vitamins and minerals. She should include more vegetables and fruits in her daily diet.

14. Mention any two features each that are seen in boys and girls each to distinguish them from each other at puberty.

Two features seen in boys at puberty are:

Two features seen in girls at puberty are:

15. We should avoid taking medicines/drugs unless prescribed by a doctor. Give reasons.

We should not take medicines/drugs unless prescribed by a doctor because some medicines have various side effects which may also lead to adverse effects or can get addicted to drugs, which ruin our health and happiness.

16. A few of Paheli’s classmates eat potato chips and burgers regularly during the recess at school. Are they healthy eating habits? Give reasons.

No. Potato chips and burgers are not healthy as it contains very little nutritional value in it and is not the good foods to eat it regularly.

17. Read the statements given below and fill up the blanks with the correct words listed in the box.

(b) Insufficient production of __________ in the tadpoles leads to their incomplete development.

(a) The meal that includes all nutrients is a balanced diet.

(b) Insufficient production of thyroxine in the tadpoles leads to their incomplete development.

18. Fill the blank circles in figure 10.1 and identify the sex of child A and B. 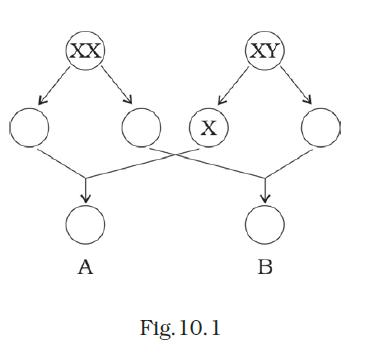 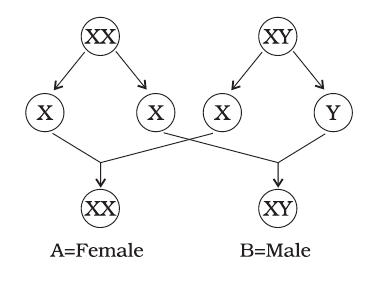 19. During adolescence, the body of boys and girls undergoes certain changes. Given below are a few of those changes.

(c) The wider region below the waist

(g) Acne and pimples on the face

Categorise these changes according to their occurrence in boys and those that occur in girls and fill in the table given below.

20. In Fig.10.2 mark the positions of the endocrine glands which release the hormones that:

(a) controls the release of sex hormones.

(b) is responsible for the secondary sexual characters in boys.

(d) maintains the correct salt balance in the blood. 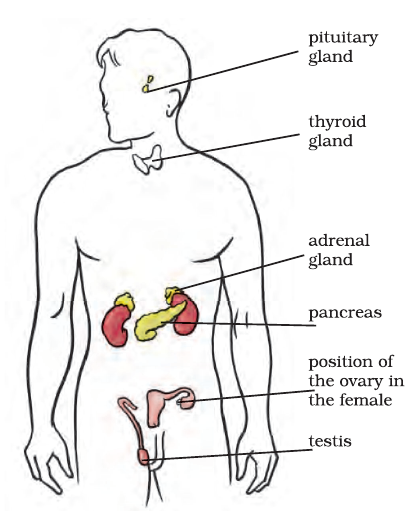 21. Given below are certain food items required for proper nourishment of adolescents. Name the nutrients present in the food items and write their functions.

22. Name the hormone which would be released during the following situations:

(a) a frightened person.

(b) growth of a child to an adult.

(c) development of caterpillar to moth.

(d) development of tadpole to frog.

(a) Adrenaline- This hormone is released when a person is frightened.

(b) Growth hormone- It is responsible for the growth of a child to an adult.

(c) Insect hormones-This hormone is responsible for the development of caterpillar to moth.

(d) Thyroxine –It is responsible for the development of tadpole to frog.

23. In human females, each time during maturation and release of the egg the inner wall of the uterus thickens. Is this thickening permanent? Give reasons.

Thickening of uterus wall is not permanent. Upon fertilization, zygote starts developing and gets embedded in the uterus wall. This results in pregnancy. During pregnancy no more ore eggs are released thickened uterine lining is released after the delivery of the baby.

24. John and Radha were classmates since childhood. When Radha became eleven years old, she developed a little swelling on her neck. She visited the doctor who started medication for her. After a few years, John also developed a slight protrusion on his throat. He got worried and went to the doctor. But, the doctor assured him that it was a normal feature in boys while they are growing up. Can you think of any reasons for the difference in diagnoses?

Goitre may be the reason behind swelling of Radha’s neck Goitre is the condition of the thyroid gland during which the gland produces an insufficient quantity of thyroxine. In the case of JOHN’s swelling of neck maybe because of Adam’s apple which is the result of the growth of voice box in adolescent boys.

25. Observe the chart and graph given in Fig. 10.3 carefully and answer the following questions. 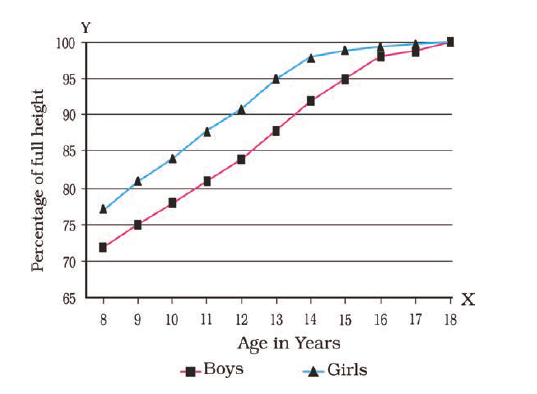 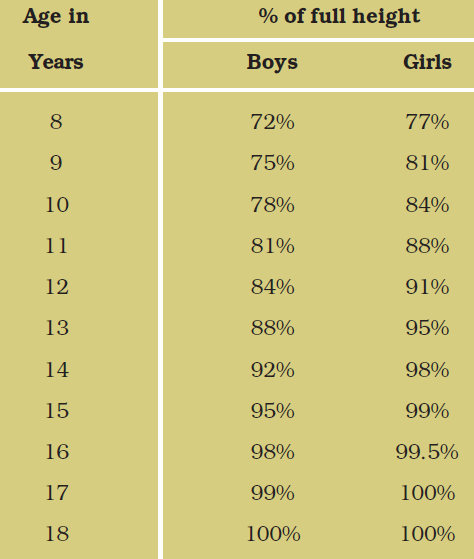 (a) Which of the line represents the height of boys?

(b) Which line represents the height of girls?

(c) What is the difference between the pattern of increase in the height of boys and girls?

(d) Is this pattern true for each individual?

(a) The red line represents the height of boys.

(b) The blue line represents the height of girls.

(c) At the onset of puberty, girls grow faster in height than the boys and by the age of 18 years, approximately both reach their maximum height.

(d) No, the rate of growth in height varies among individuals. Some may grow in height suddenly at puberty and then slow down, while others may grow gradually.

26. Salma had a very soft and smooth skin during her childhood. As she entered adolescence, she developed pimples on her face. The skin specialist advised her to wash her face at regular intervals. Can you explain the reasons for the appearance of pimples on her face and suggest ways to prevent them?

27. Our government has legalised the age for marriage in boys and girls. Give reasons as to why one should get married after a certain age.

28. It is believed that the height of a child depends upon the genes inherited from parents. However, it is often seen that tall parents may have short children and vice-versa. Are there factors other than genes, that can cause these variations?

Height of a person is not just relied on the hereditary character. It depends on the type of food they eat. Physical exercise they do. Secretion levels of various growth hormones. The disease they encounter in their life.

We at BYJU’S provide free NCERT Exemplars which are available in chapter wise to help students in their academics. Students can easily download these NCERT Exemplar solutions which are available in PDF format and practice more questions to ace in their CBSE board exams. Apart from the solved textbooks questions, students can find more important questions, biology chapter notes, previous year question papers, tips, and guidance to prepare for their exams.

Does the NCERT Exemplar Solutions for Class 8 Science Chapter 10 help students to grasp the features of adolescence?

The chapter 10 of NCERT Exemplar Solutions for Class 8 Science is an important part in the syllabus. Students need to focus more on the classroom sessions and try to understand what the teacher is explaining during the class hours. The chapters must be studied unit wise and the students must clear their doubts instantly using the solutions available on BYJU’S. The new concepts are also explained in an interactive manner to help students grasp them without any difficulty. Regular practice is the main key to remember the concepts efficiently. If they possess any doubts regarding the questions, they can refer to the NCERT Exemplar Solutions for Class 8 Science Chapter 10 from BYJU’S. The questions are solved in the most systematic way by keeping in mind the marks weightage allotted for each step in the CBSE exam.

What are the topics and subtopics covered in the Chapter 10 of NCERT Exemplar Solutions for Class 8 Science?

Why should I use the NCERT Exemplar Solutions for Class 8 Science Chapter 10 PDF from BYJU’S?

Science is one of the important subjects for Class 8 students as most of the concepts are continued in higher levels of education. For this purpose, obtaining a strong foundation of the fundamental concepts is important. Students are recommended to answer the textbook questions using the solutions PDF available on BYJU’S to gain a grip on the important concepts. The PDF of solutions can be downloaded and referred to understand the method of answering complex questions.
Also, Read