NCERT Solutions for Class 8 Science Chapter 10 Reaching the Age of Adolescence is the best study material for those students who are finding difficulties in preparing for their exams. The NCERT Solutions to all the questions present in the NCERT textbooks. Students can also prepare their notes and other class assignments by downloading these solutions in PDF format for free. This Chapter aids you in gaining complete knowledge on the meaning of adolescence, changes that occur during adolescence, hormones that are released prior to adolescence, sexual maturity in male and females, menstrual cycle and its consequences.

The NCERT Solutions for Class 8 Science reaching the age of adolescence includes explanations to all the questions included in the CBSE Class 8 textbook and are prepared by the subject professionals in a systematic manner, according to the updated CBSE syllabus and guidelines. 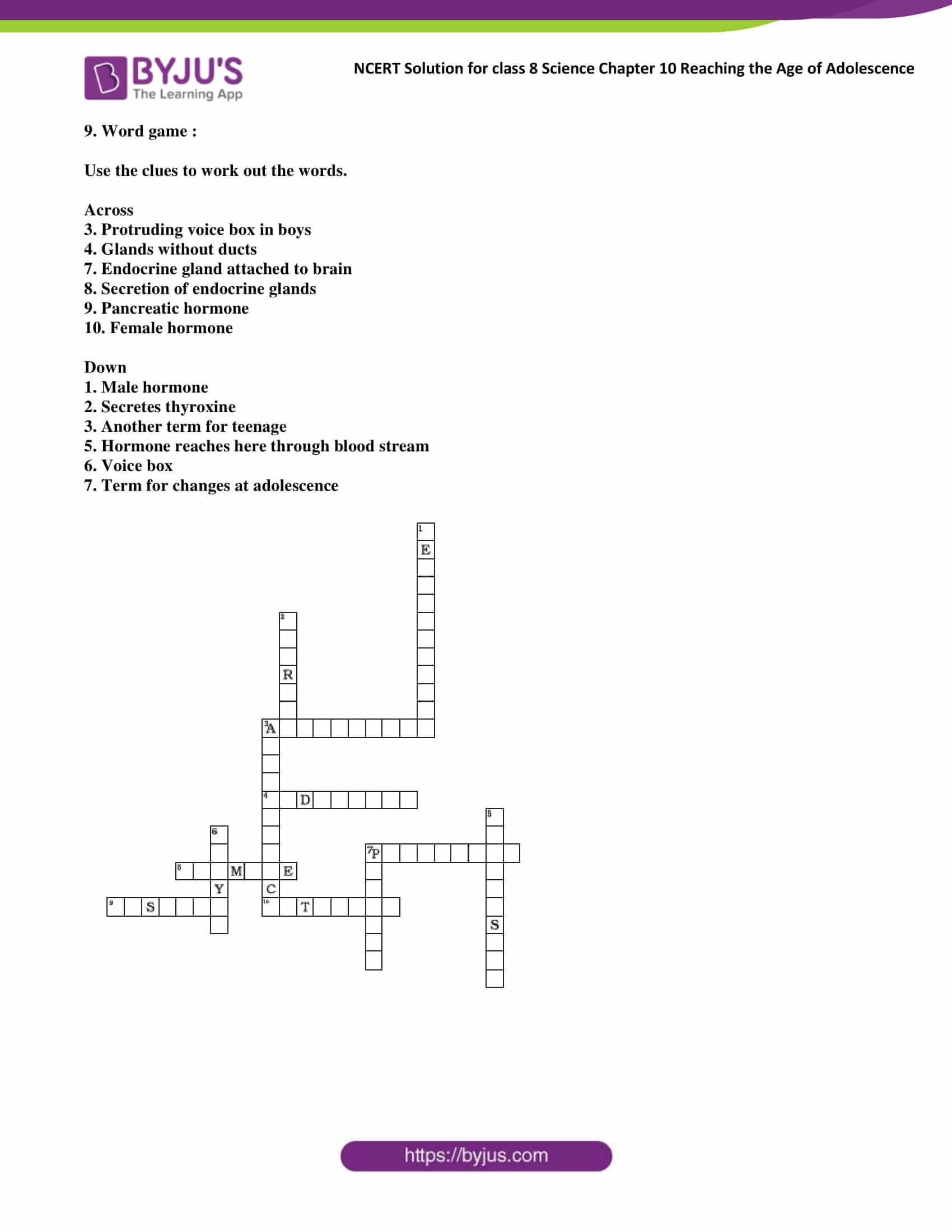 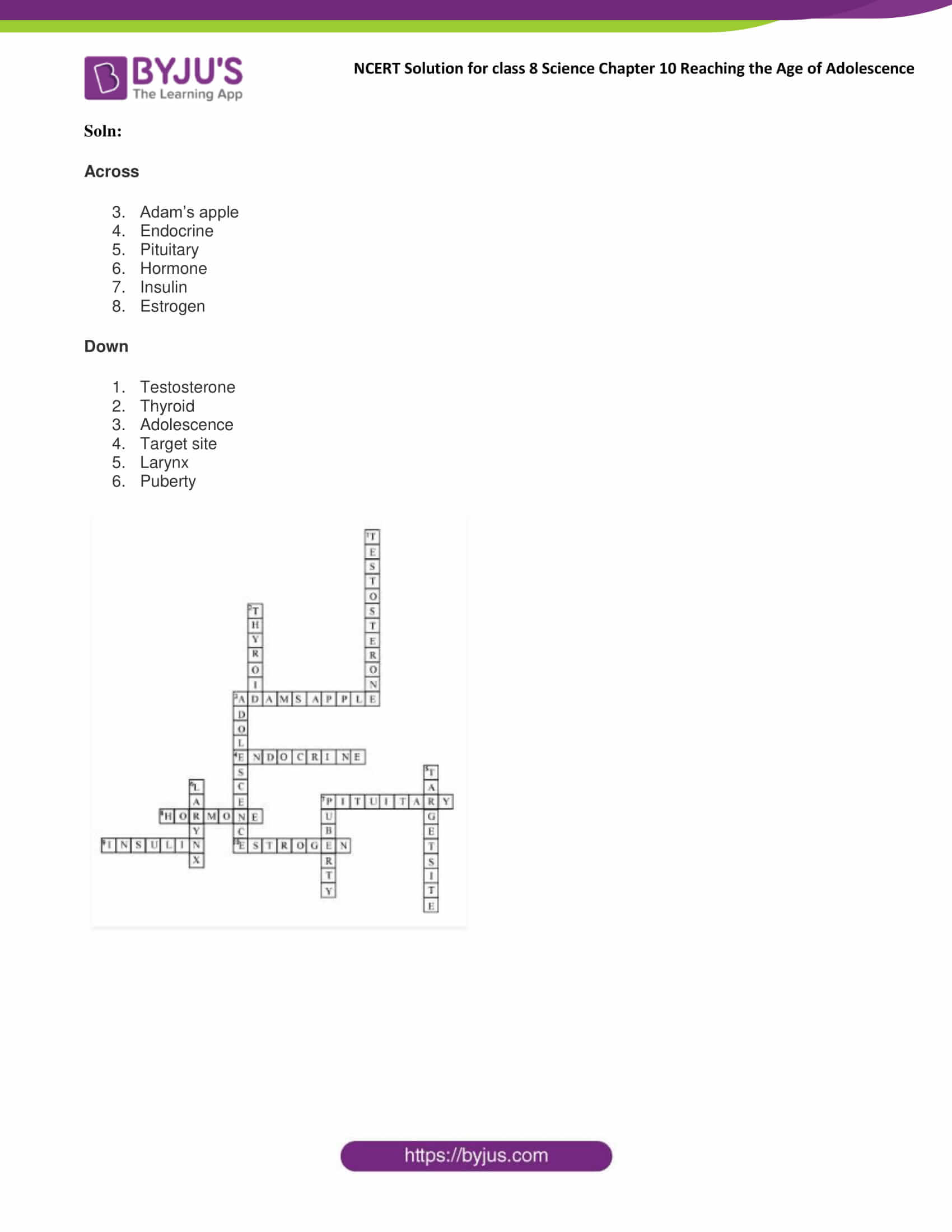 1. What is the term used for chemical secretions of endocrine glands responsible for changes taking place in the body?

The chemical substance secreted by the endocrine glands is called Hormones. Hormones are responsible for the changes taking place in the body.

The time period which comes between the beginning of adulthood and puberty is called Adolescence. In this time period, the body undergoes different changes alongside reproductive maturity. It starts somewhat at the age of 11 and ends at the age of 18 or19. This period of adolescence may differ from person to person.

3. What is menstruation? Explain

The process of shedding of the uterine lining on a regular monthly basis is called menstruation. It starts at puberty and in the reproductive cycle of the female body. The uterus prepares itself to receive a fertilized egg on every month. Due to this the inner lining of the uterus become thick and is supplied with blood to nourish the embryo. If the egg is not fertilized, then the lining of the uterus breaks down and get released in the form of blood through the vagina. The time period for this is about 2 to 8 days every month. This monthly cycle is known as the menstrual cycle.

4. List changes in the body that take place at puberty

The changes that take place at the time of puberty are as follows:

a) The height and weight of the body will suddenly increase

b) The hair seems to appear in the areas such as legs, hands, face and underarms

e) Acne seems to appear because of the excessive secretion of the oil from the skin.

f) In boys, the larynx becomes prominent under the influence of hormones, the vocal cord becomes longer and thicker resulting in a hoarse voice.

5. Prepare a Table having two columns depicting names of endocrine glands and hormones secreted by them.

6. What are sex hormones? Why are they named so? State their function

Some of the functions performed by the sex hormones:

Oestrogen: This hormone is responsible for the development of secondary sexual characters in females like enlargement of breasts, development of female reproductive organs, etc.

Testosterone: this hormone brings the secondary sex character in boys such as the growth of beard, the voice becomes hoarse, development of the reproductive organs etc.

(a) Adolescents should be careful about what they eat, because

(i) proper diet develops their brains.

(ii) proper diet is needed for the rapid growth taking place in their body.

(b) Reproductive age in women starts when their

(c) The right meal for adolescents consists of

a) (ii) proper diet is needed for the rapid growth taking place in their body.

b) (i) menstruation starts.

a) Adam’s apple: In human males, the larynx grows larger at the time of puberty and can be seen as a protruding part of the throat. This protrusion is known as Adam’s apple. In boys under the influence of sex hormones, the larynx becomes prominent. Due to this, the vocal cord becomes thicker and longer which causes the voice hoarse. On the other hand in females, the larynx is of small size and is hardly visible. Therefore, girls have a high pitched voice while the boys have a deep voice.

b) Secondary sexual characters: Characters which usually appear during the phase of puberty are called as secondary sexual characters. These are the features that help in distinguishing the male and female body from each other.
Characters seen in male: Hoarseness of voice, appearance of beard, broadness of chest, growth of hair in genital areas.
Characters seen in female: Start of menstrual cycle, growth of breast, growth of hair in the genital areas.

Use the clues to work out the words.

3. Another term for teenage

7. Term for changes at adolescence 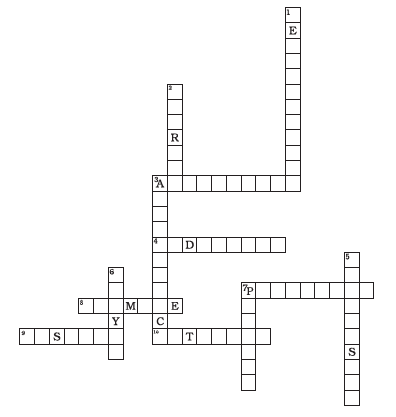 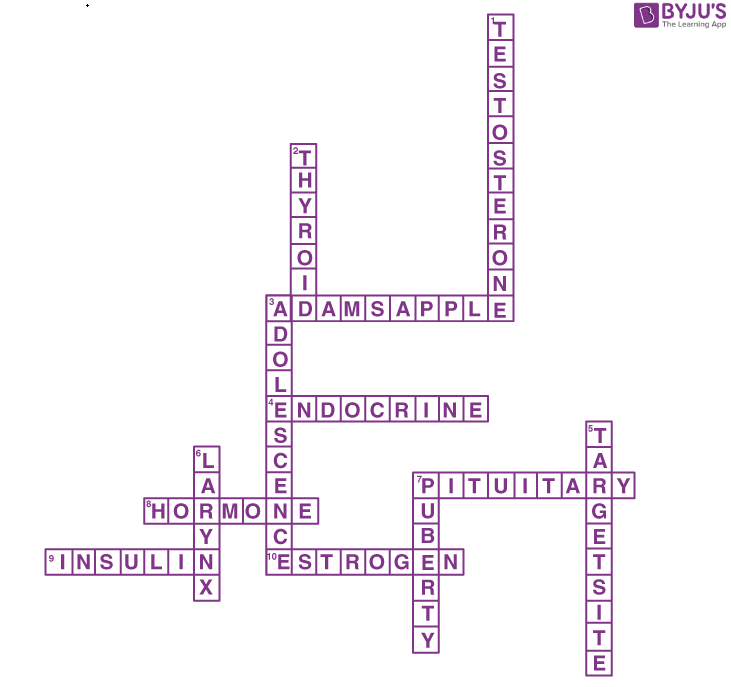 BYJU’S is India’s largest k-12 learning app with top-notch teachers from across the nation, with excellent teaching skills as its faculty. Find notes, question papers for various other subjects like Mathematics, Biology, Chemistry and many competitive exams.

Why should I use the NCERT Solutions for Class 8 Science Chapter 10 PDF from BYJU’S?

Science is one of the important subjects for Class 8 students as most of the concepts are continued in higher levels of education. For this purpose, obtaining a strong foundation of the fundamental concepts is important. Students are recommended to answer the textbook questions using the solutions PDF available on BYJU’S to gain a grip on the important concepts. The PDF of Solutions can be downloaded and referred to understand the method of answering complex questions.

Does the NCERT Solutions for Class 8 Science Chapter 10 help students to grasp the features of age of adolescence?

The chapter 10 of NCERT Solutions for Class 8 Science is an important part in the syllabus. Students need to focus more on the classroom sessions and try to understand what the teacher is explaining during the class hours. The chapters must be studied unit wise and the students must clear their doubts instantly using the solutions available on BYJU’S. The new concepts are also explained in an interactive manner to help students grasp them without any difficulty.

Define adolescence in the Chapter 10 of NCERT Solutions for Class 8 Science?

The time period which comes between the beginning of adulthood and puberty is called Adolescence. In this time period, the body undergoes different changes alongside reproductive maturity. It starts somewhat at the age of 11 and ends at the age of 18 or19. This period of adolescence may differ from person to person. Regular practice is the main key to remember the concepts efficiently.