NCERT Solutions for Class 8 Science Chapter 12 Friction is one of the most crucial resources for the students of 8th Standard. The solutions provided here aim to help students understand the chapter in an interesting way. These Chapter 12 Friction Solutions are created by subject experts, according to the latest CBSE guidelines and syllabus (2022-23).  This solution consists of answers to the questions given in the CBSE Class 8 Science textbook along with extra questions, worksheets, exemplary questions, MCQs and short answer questions.

Students are advised to practice the solutions regularly to prepare effectively for their examination. Along with NCERT Solutions students are also advised to read and solve previous year question papers and sample papers. Solving the previous year questions will help you to get acquainted with the latest exam pattern as well as the marking scheme. 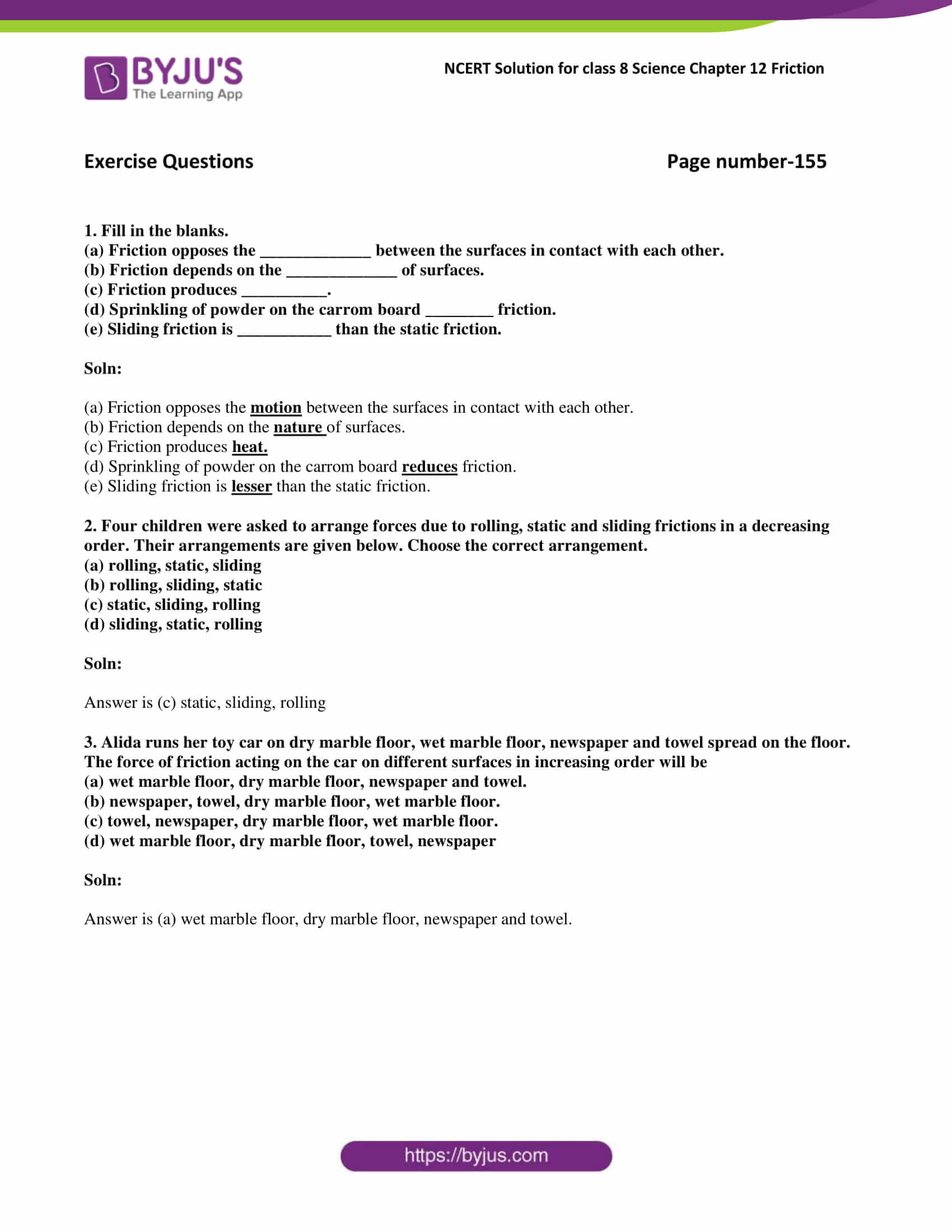 (a) Friction opposes the motion between the surfaces in contact with each other.

(b) Friction depends on the nature of surfaces.

(d) Sprinkling of powder on the carrom board reduces friction.

(e) Sliding friction is lesser than the static friction.

2. Four children were asked to arrange forces due to rolling, static and sliding frictions in a decreasing order. Their arrangements are given below. Choose the correct arrangement.

3. Alida runs her toy car on dry marble floor, wet marble floor, newspaper and towel spread on the floor. The force of friction acting on the car on different surfaces in increasing order will be

4. Suppose your writing desk is tilted a little. A book kept on it starts sliding down. Show the direction of frictional force acting on it.

When book slides down on the desk, a frictional force acts between the book and the surface of the desk. The direction of the friction force on the book is opposite to the direction of its motion and acts in an upward direction. It is shown in the diagram below. 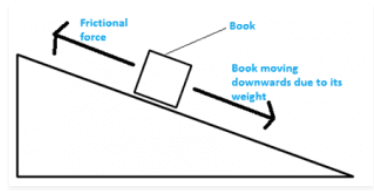 5. You spill a bucket of soapy water on a marble floor accidently. Would it make it easier or more difficult for you to walk on the floor? Why?

6. Explain why sportsmen use shoes with spikes.

Sportsmen use shoes with spikes because of the better grip given by spikes while running. This is because the force of friction between the shoes and the ground increases with the help of spikes.

7. Iqbal has to push a lighter box and Seema has to push a similar heavier box on the same floor. Who will have to apply a larger force and why?

8. Explain why sliding friction is less than static friction

When irregularities present in the surfaces of two objects in contact get interlocked with each other, friction come into play.  The time given in sliding for interlocking is very small. Thus, interlocking is not strong. Therefore, less force is required to overcome this interlocking. Due to this reason, sliding friction is less than static friction.

9. Give examples to show that friction is both a friend and a foe.

Advantages of the friction

a) Due to friction, we are able to walk.

b) We are able to write because of the friction between the tip of the pen and paper.

a) Because of friction, the tires and soles of shoes wear out.

10. Explain why objects moving in fluids must have special shapes.

When a body moves through a fluid, it experiences an opposing force which tries to oppose its motion through the fluid. This opposing force is known as the drag force. This frictional force depends on the shape of the body. By giving the objects a special shape, the force of friction acting on it can be minimized. Hence, it becomes easier for a body to move through the fluid.

The NCERT Class 8 Science Solutions for Chapter 12 Friction given here assists the students to clear all their doubts. These NCERT Solutions will help students to have a deeper understanding of the concepts and terminologies involved in this chapter. Students are advised to read the chapters of Class 8 Science very carefully because the chapters here are the basics of the topics which will be taught in Class 9.

Physics is a tough subject for students. Many students fail to comprehend the subject mainly derivations and numerical problems. To make you understand Physics-related topics, BYJU’S brings you interactive videos and animations that not only help you in understanding the concepts but also help you in scoring good marks in the examination.

List out the topics included in the Chapter 12 of NCERT Solutions for Class 8 Science.

What is frictional force covered in the Chapter 12 of NCERT Solutions for Class 8 Science?

Friction is the force that resists motion when the surface of one object comes in contact with the surface of another. The mechanical advantage of a machine is reduced by friction, or in other words, the ratio of output to input is reduced because of friction.

Is the NCERT Solutions for Class 8 Science Chapter 12 the best study material for the students?

The NCERT Solutions for Class 8 Science Chapter 12 help students to improve their conceptual knowledge. The solutions are created by the subject experts at BYJU’S which are accurate as per the latest CBSE syllabus and guidelines. Using the solutions PDF, students will be able to gain a clear view about the concepts which are important for the exams. Most of the questions in the board exams and competitive exams appear from the NCERT textbooks. For this purpose, students are advised to practice the textbook questions regularly for a better academic performance.