The way one expresses answers in the exam plays a significant role. Students who are good in expressing their answers can easily score high marks. NCERT Solutions for Class 10 Economics Chapter 4 – Globalisation will help students in framing answers in their own way. Moreover, if students want, they can also write the same answer in their exam, as provided in the solutions PDF. Referring to these answers will help students prepare for their exams in an effective way. Students can also go through NCERT Solutions Class 10 Social Science to obtain the exercise answers of all the chapters of History, Geography, Political Science and Economics. 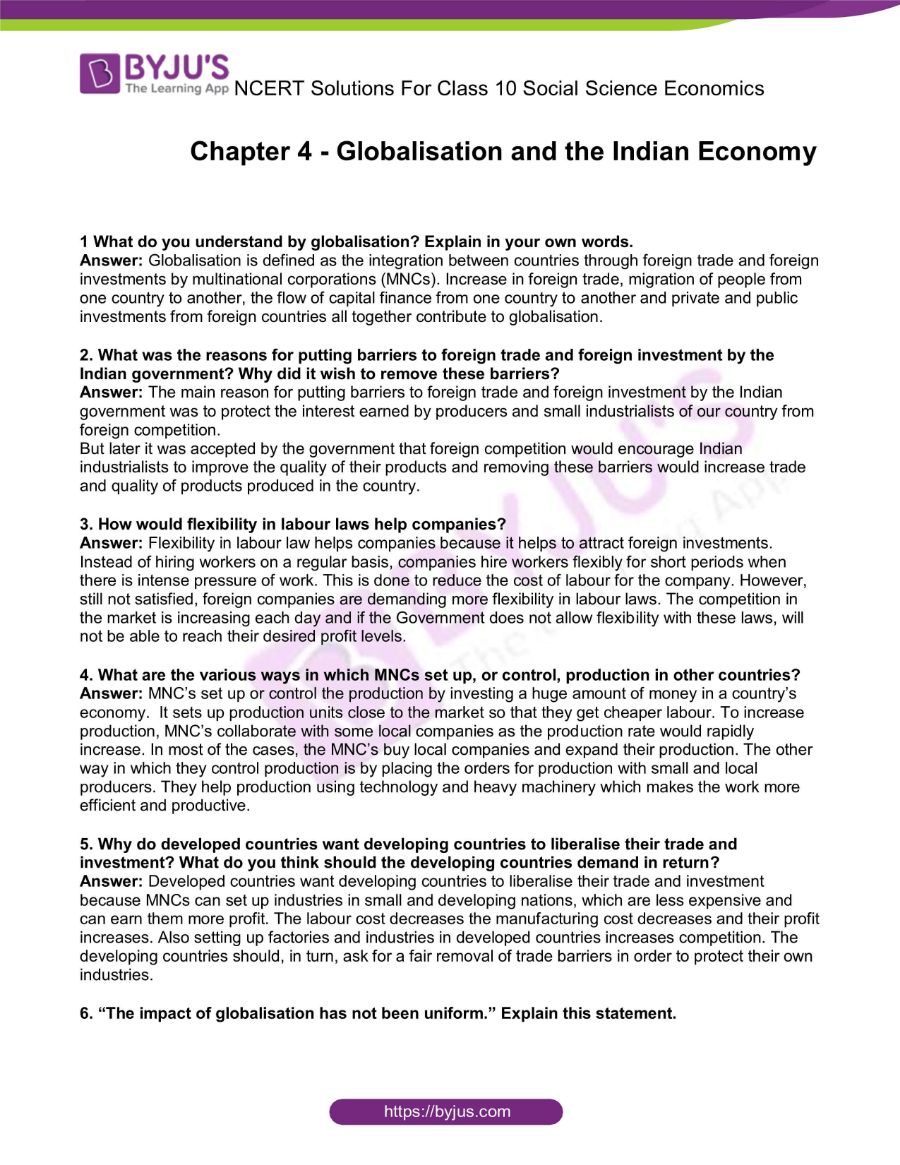 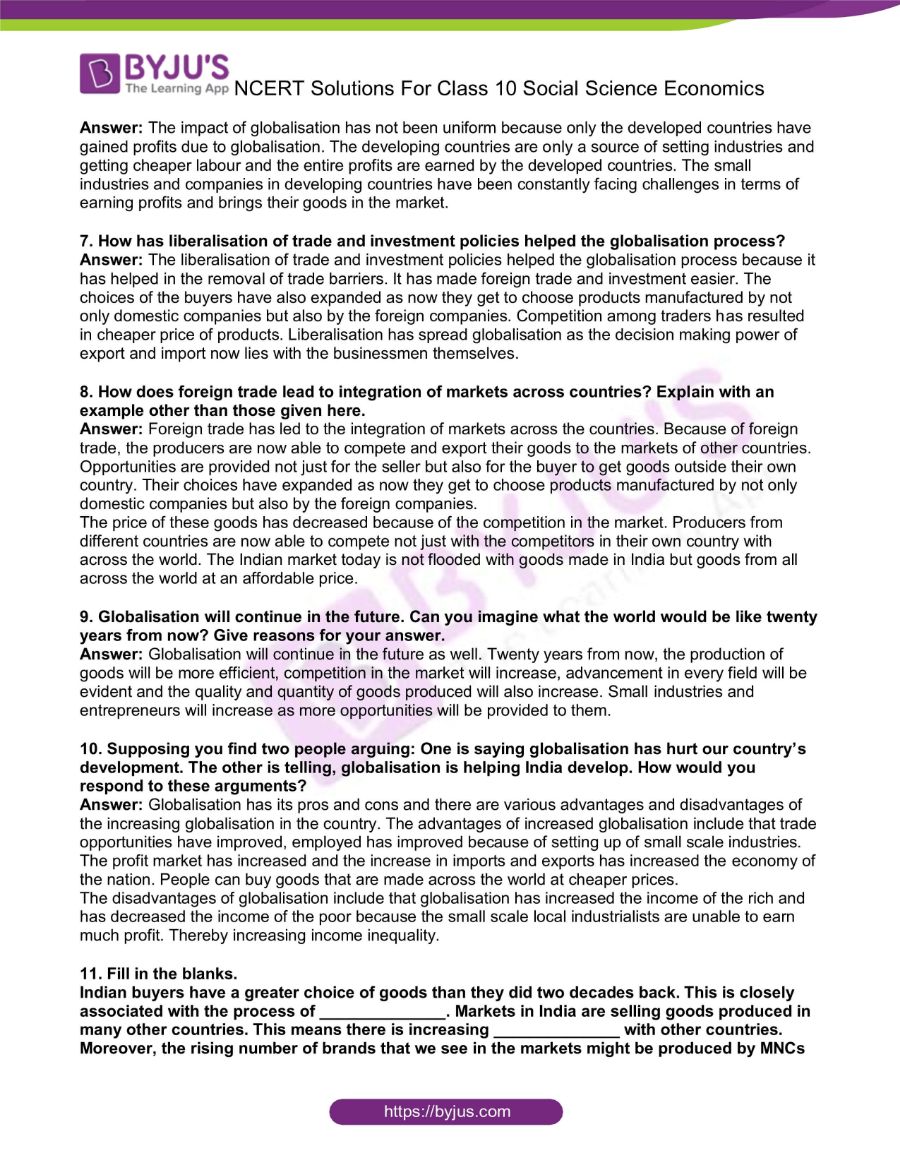 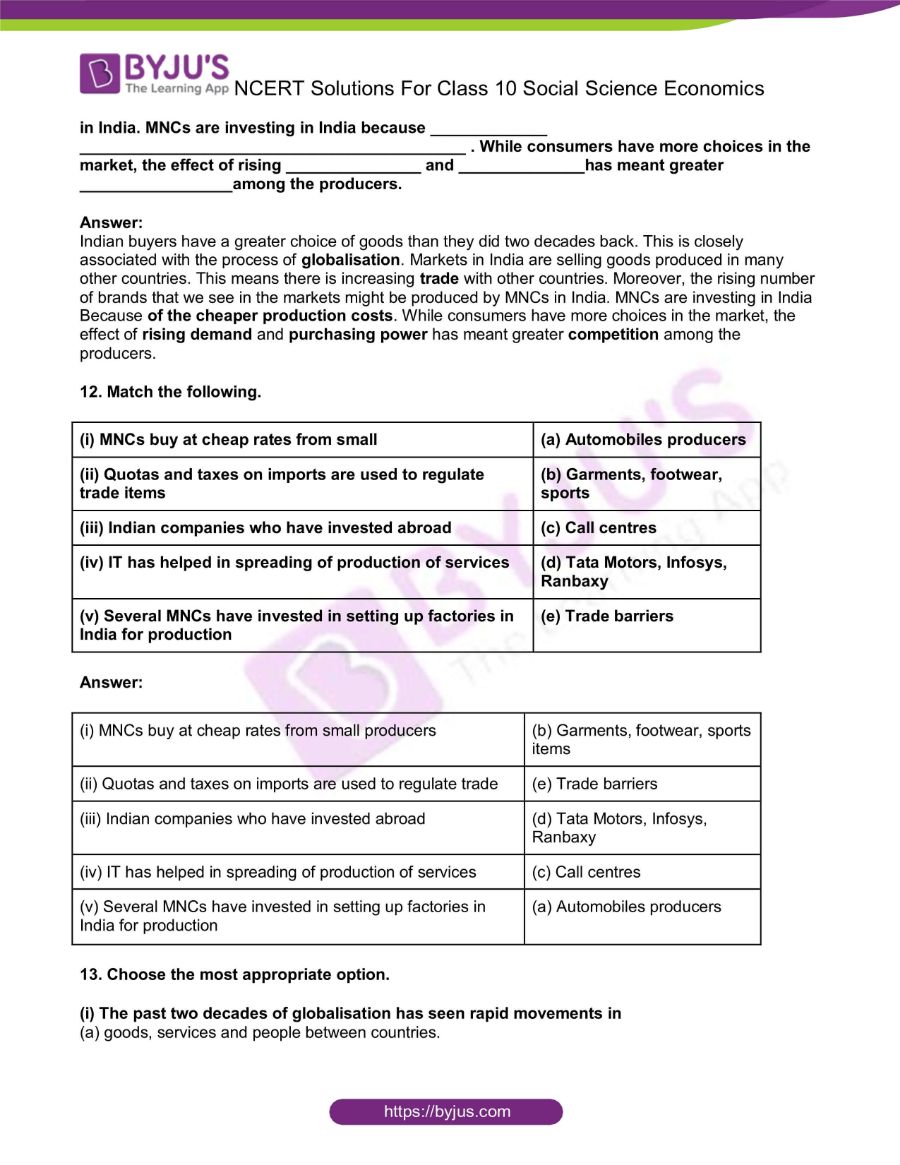 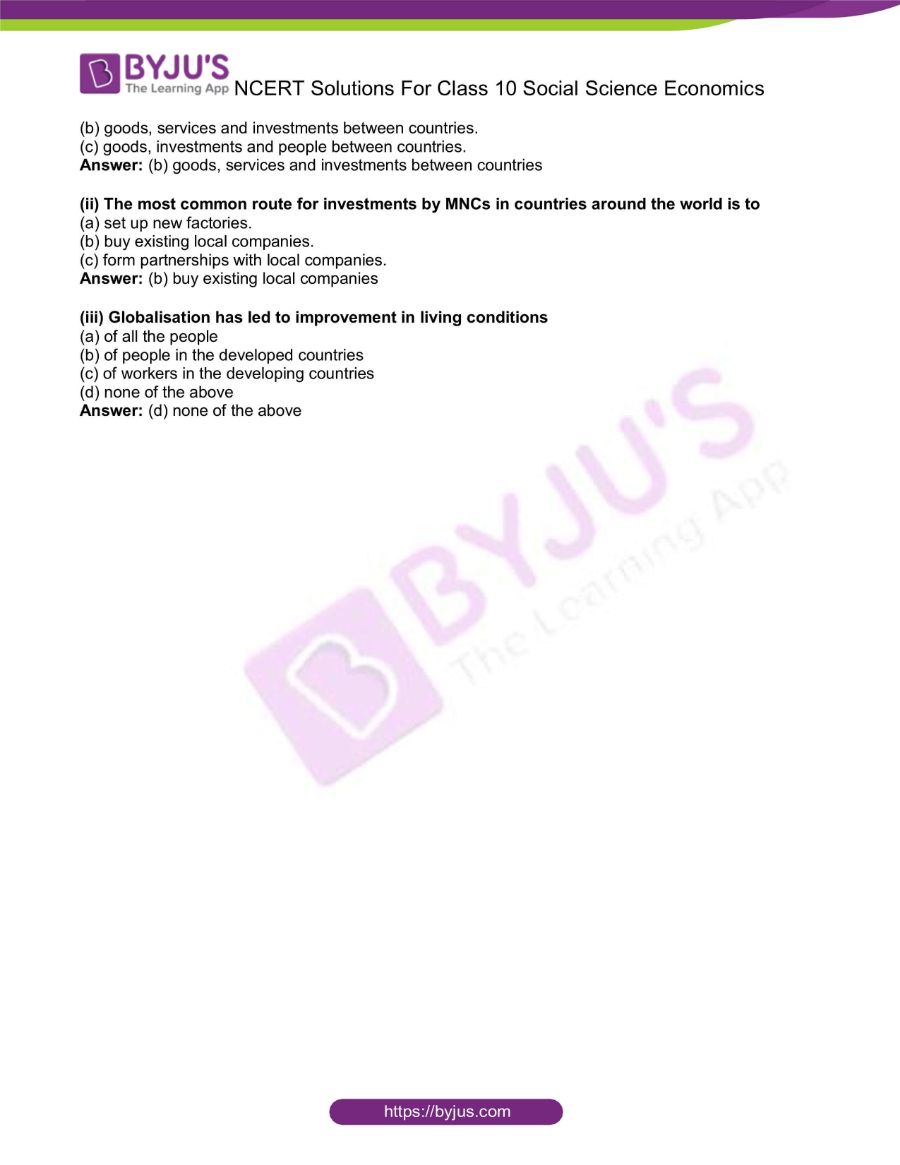 The solutions for Chapter 4 – Globalisation and The Indian Economy are given below. Students should also check NCERT Solutions for Class 10 for other subjects.

1. What do you understand by globalisation? Explain in your own words.

Answer: Globalisation is defined as the integration between countries through foreign trade and foreign investments by multinational corporations (MNCs). Increase in foreign trade, migration of people from one country to another, the flow of capital finance from one country to another and private and public investments from foreign countries all together contribute to globalisation.

2. What was the reasons for putting barriers to foreign trade and foreign investment by the Indian government? Why did it wish to remove these barriers?

Answer: The main reason for putting barriers to foreign trade and foreign investment by the Indian government was to protect the interest earned by producers and small industrialists of our country from foreign competition.

But later it was accepted by the government that foreign competition would encourage Indian industrialists to improve the quality of their products and removing these barriers would increase trade and quality of products produced in the country.

3. How would flexibility in labour laws help companies?

Answer: Flexibility in labour law helps companies because it helps to attract foreign investments. Instead of hiring workers on a regular basis, companies hire workers flexibly for short periods when there is intense pressure of work. This is done to reduce the cost of labour for the company. However, still not satisfied, foreign companies are demanding more flexibility in labour laws. The competition in the market is increasing each day, and if the Government does not allow flexibility with these laws, the foreign companies will not be able to reach their desired profit levels.

4. What are the various ways in which MNCs set up, or control, production in other countries?

Answer: Developed countries want developing countries to liberalise their trade and investment because MNCs can set up industries in small and developing nations, which are less expensive and can earn them more profit. The labour cost decreases the manufacturing cost, and these decreases in cost results in an increase in profit. Also setting up factories and industries in developed countries increases competition. The developing countries should, in turn, ask for a fair removal of trade barriers in order to protect their own industries.

6. “The impact of globalisation has not been uniform.” Explain this statement.

Answer: The impact of globalisation has not been uniform because only the developed countries have gained profits due to globalisation. The developing countries are only a source of setting industries and getting cheaper labour, and the entire profits are earned by the developed countries. The small industries and companies in developing countries have constantly been facing challenges in terms of earning profits and brings their goods in the market.

7. How has liberalisation of trade and investment policies helped the globalisation process?

Answer: The liberalisation of trade and investment policies helped the globalisation process because it has helped in the removal of trade barriers. It has made foreign trade and investment easier. The choices of the buyers have also expanded, as now they get to choose products manufactured by not only domestic companies but also by the foreign companies. Competition among traders has resulted in the cheaper price of products. Liberalisation has spread globalisation as the decision making power of export and import now lies with the businessmen themselves.

8. How does foreign trade lead to integration of markets across countries? Explain with an example other than those given here.

Answer: Foreign trade has led to the integration of markets across the countries. Because of foreign trade, the producers are now able to compete and export their goods to the markets of other countries. Opportunities are provided not just for the seller but also for the buyer to get goods outside their own country. Their choices have expanded as now they get to choose products manufactured by not only domestic companies but also by the foreign companies.

The price of these goods has decreased because of the competition in the market. Producers from different countries are now able to compete not just with the competitors in their own country, but with across the world. The Indian market today is not flooded with goods made in India but goods from all across the world at an affordable price.

9. Globalisation will continue in the future. Can you imagine what the world would be like twenty years from now? Give reasons for your answer.

Answer: Globalisation will continue in the future as well. Twenty years from now, the production of goods will be more efficient, competition in the market will increase, advancement in every field will be evident and the quality and quantity of goods produced will also increase. Small industries and entrepreneurs will increase as more opportunities will be provided to them.

10. Supposing you find two people arguing: One is saying globalisation has hurt our country’s development. The other is telling, globalisation is helping India develop. How would you respond to these arguments?

Indian buyers have a greater choice of goods than they did two decades back. This is closely associated with the process of globalisation. Markets in India are selling goods produced in many other countries. This means there is increasing trade with other countries. Moreover, the rising number of brands that we see in the markets might be produced by MNCs in India. MNCs are investing in India Because of the cheaper production costs. While consumers have more choices in the market, the effect of rising demand and purchasing power has meant greater competition among the producers.

13. Choose the most appropriate option.

1. The past two decades of globalisation has seen rapid movements in

2. The most common route for investments by MNCs in countries around the world is to

3. Globalisation has led to improvement in living conditions

Answer: d. none of the above

Globalisation and The Indian Economy Summary

Chapter 4 – ‘Globalisation And The Indian Economy’ from NCERT class 10 Economics books discuss globalisation across the world. It defines globalisation as the integration between countries through foreign trade and foreign investments by multinational corporations (MNCs). The impact of globalisations, how globalisation has contributed to the development of the country, rapid improvement in the field of technology and liberalisation have also been discussed in this chapter.

Other important topics that the students will read this chapter include: