The last chapter of Economics deals with consumers rights. It discusses the issue of consumer rights within the context of the ways markets operate in India. There are many aspects of unequal situations in a market and poor enforcement of rules and regulations. This chapter provides a case on how some consumers were exploited in a real-life situation and how legal institutions helped consumers in getting compensated and in upholding their rights. So, to help students understand this chapter in a better way, we have provided the answers to the exercise question in NCERT Solutions Class 10 Economics Social Science Chapter 5: Consumer Rights. These answers will help students in their board exam preparation. 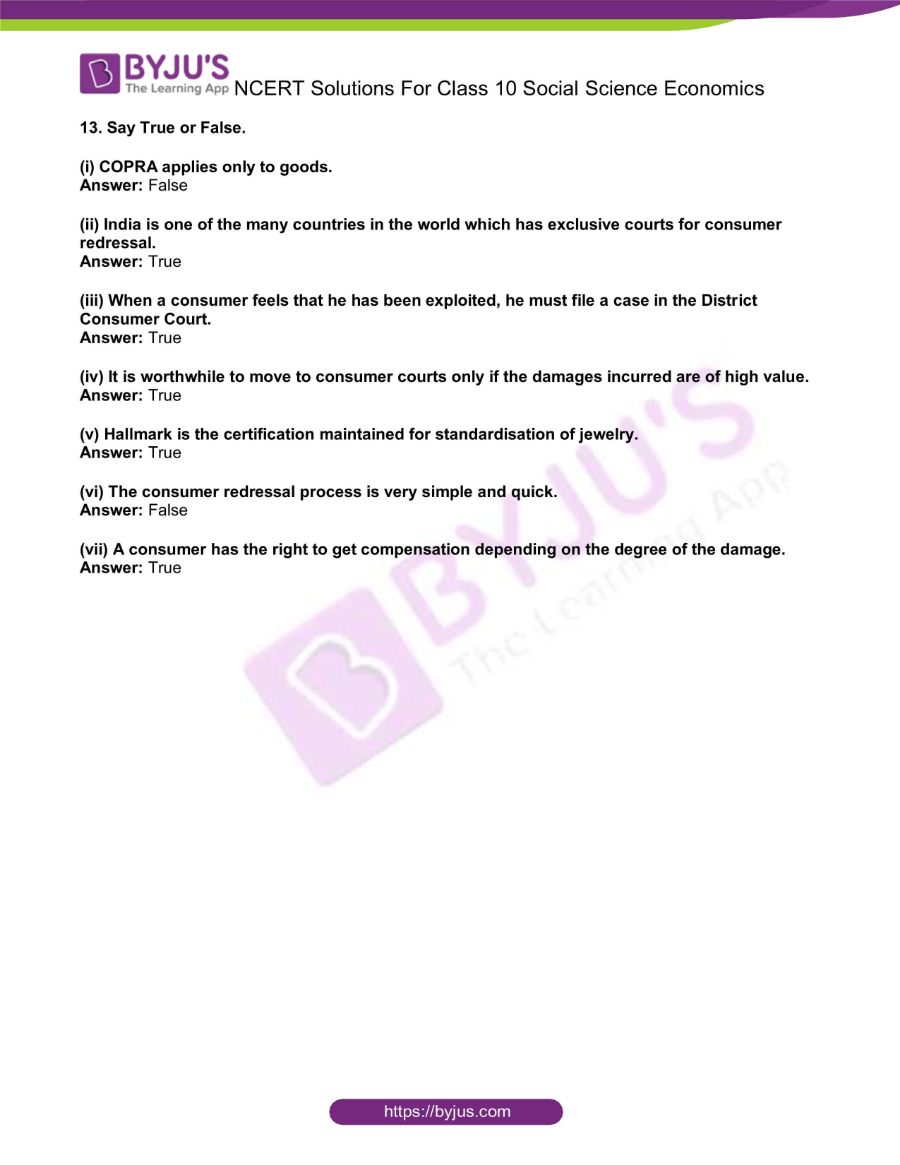 The solutions for Chapter 5 of Understanding Economic Consumer Rights are given below. Students should also check NCERT Solutions for Class 10 for other subjects.

1.Why are rules and regulations required in the marketplace? Illustrate with a few examples.

Answer: Rules and regulations are required in the marketplace for the protection of the consumer. Individual buyer can be misled by the seller and in case of any complaint against the shopkeeper, the blame is put on the buyer. The sellers tend to hold no responsibility for the goods once sold. Hence, to protect consumers from such incidents, rules and regulations are required in the marketplace. For example, if a person buys a product and checks the expiry date after paying for the product, the shopkeeper must restore the expired product. If no rules were maintained then the shopkeeper might refuse to compensate for the product.

2.What factors gave birth to the consumer movement in India? Trace its evolution.

Till the mid-1970s, the consumer organisations were busy writing articles and holding exhibitions to arouse consciousness among the consumers. There has been an upsurge in the number of consumer groups since the 1980s. Currently, there are about 700 consumer organisations in India, working in the field of consumer protection. Greater awareness among the consumers about their rights also led to a gradual transition from a predominantly sellers’ market to a buyers’ market.

These movements have also influenced the government to work for the protection of the consumer and the Consumer Protection Act was passed in 1986 to safeguard the interest of the consumers.

3.Explain the need for consumer consciousness by giving two examples.

Answer: The consumer must be conscious while buying or trading anything in the market so that they are not being cheated or exploited in the market place and charged wrongly for the goods.

For example, a person must always check the expiry and manufacturing date of the product before paying for it and must complain about the shopkeeper in the consumer forum, if any expired product is found in the shop.

Another example that proves that consumer consciousness is that a consumer must always ask for a computerised bill for the goods they buy. This is because if a consumer has been provided with a wrong product, the consumer forum demands a bill that acts a proof that the product given by the shopkeeper is wrong.

4. Mention a few factors which cause exploitation of consumers.

Answer: A few factors that cause the exploitation of consumers are as follows:

5. What is the rationale behind the enactment of the Consumer Protection Act 1986?

Answer: The rationale behind the enactment of the Consumer Protection Act 1986 was to set up a department solely responsible to handle the complaints raised by the consumer and a separate department for the Central and state governments. Its main aim was to address the problems of consumers who reach the consumer courts for exploitation in the marketplace.

6. Describe some of your duties as consumers if you visit a shopping complex in your locality.

Answer: Some of our duties as consumers are given below:

7. Suppose you buy a bottle of honey and a biscuit packet. Which logo or mark you will have to look for and why?

Answer: If you buy a bottle of honey or a packet of biscuit, look for the Agmark and the ISI mark before buying it. It is because these symbols specify that the products have been made by Government authorised companies.

8.What legal measures were taken by the government to empower the consumers in India?

Answer: The legal measures taken by the government to empower the consumers are as mentioned below:

9.Mention some of the rights of consumers and write a few sentences on each.

Answer: A few rights of the consumers include:

10. By what means can the consumers express their solidarity?

Answer: Consumers can express their solidarity by organising themselves in small groups that can fight against the exploitative trade policies. Such groups get financial aid from the government to fight the case against the shopkeeper.

11.Critically examine the progress of the consumer movement in India.

Answer: The consumer movement in India has progressed rapidly over the past few years. The consumer rights that have been passed by the Government of the country has managed the people to become more aware and fight for their rights in the consumer courts. The Consumer Protection Act (COPRA) passed by the government made it easier for people to complain against any wrong practice performed by the shopkeeper or seller of the product. The public has become more aware and proper actions are taken against any ill practice in the marketplace.

Chapter 5 of class 10, Economics, Consumer Rights discusses the Consumer Rights that the Government has provided the citizens of the country and how can the citizens raise their voice against any ill-practise in the marketplace. The chapter also provides some case studies where the consumer was exploited by the seller and how legal institutions helped consumers in upholding their rights.

The chapter discusses the requirement of rules and laws in the marketplace and these rules have helped the consumer fight for their rights. The development of the consumer movement in the country and the unethical practices of trading have also been mentioned. Different consumer rights include:

Consumer Rights have been given major importance in this chapter and students will learn how Government helped in the building of self-help groups and other organisations for the right of its citizens.

‘Understanding Economic Development’ is an important book for Class 10 SST Economics. Apart from this chapter, the full set of NCERT Solutions for Class 10 Social Science is given in the linked page.