Fabaceae is a family of angiosperms. It is also known as Leguminosae and the plants are commonly known as legumes. It is widely distributed all over the world. It includes many important pulses such as peas, soybean, chickpeas, etc. 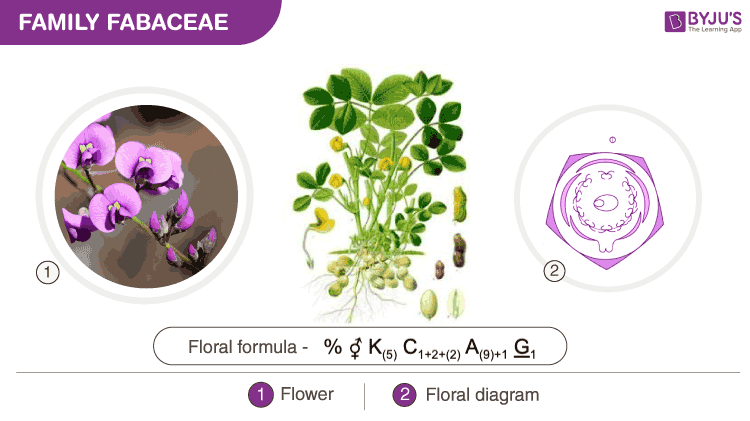 A floral formula is a symbolic representation of different floral parts, their numbers, arrangement pattern and how they are related. The floral formula of Pisum sativum (peas) of the Fabaceae family is as follows:

Fabaceae is the third-largest family of angiosperms. It contains ~750 genera and ~20,000 species. Astragalus, Acacia, Indigofera, Crotalaria and Mimosa are five of the largest genera of the Fabaceae family. Some common examples are:

It is the third-largest family of flowering plants.

Root: The presence of root nodules is the characteristic property of the family. They contain nitrogen-fixing symbiotic bacteria (Rhizobium) in their root nodules.

Stem: Herbaceous or woody. The stem may be erect or climber.

Leaf: Leaves are mostly alternate, simple or pinnately compound with reticulate venation. Leaves are stipulate. They have swollen (pulvinate) leaf base.

Corolla: Papilionaceous and polypetalous petals with vexillary aestivation. Five petals, one posteriorly placed, two lateral, called wings and two anterior, enclosing stamens and pistil, which is known as the keel.

Gynoecium: Mono carpellary with the superior and unilocular ovary. Each locule contains many ovules. It contains one curved style.

Seeds: Nonedospermic and with two cotyledons.

To sum up, in general, the flowers of the Fabaceae family are zygomorphic, bisexual, pentamerous and hypogynous.

Calyx has five sepals, which are united or gamosepalous with valvate or imbricate aestivation.

Corolla consists of five petals, which are polypetalous with vexillary aestivation.

The gynoecium is monocarpellary with a superior ovary.

You just read about the floral formula of the Fabaceae family. For more such information related to NEEt, visit BYJU’S.