Spirogyra are free-floating green algae present in freshwater habitats such as ponds, lakes, etc. Spirogyra are commonly known as “water silk or pond silk”. They have a filamentous and unbranched vegetative structure. There are around 400 species of Spirogyra found. The genus Spirogyra is named after the unique spiral chloroplast present in the cells of algae.

Spirogyra are photosynthetic and contribute substantially to the total carbon dioxide fixation carried out. They increase the level of oxygen in their habitat. Many aquatic organisms feed on them. 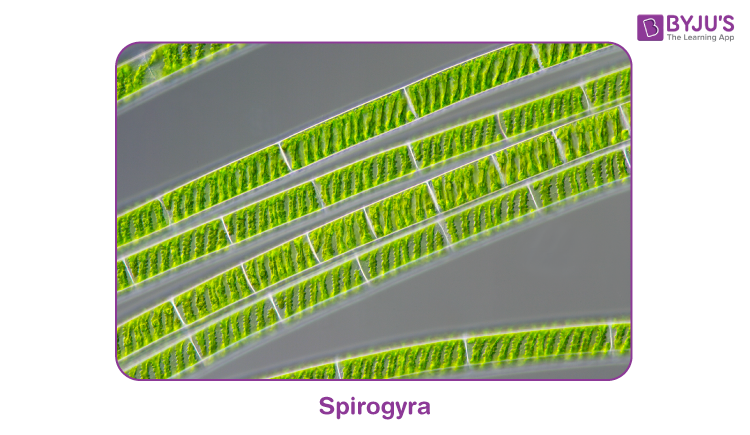 Spirogyra is classified under Chlorophyta due to the presence of chlorophyll. The genus contains around 400 species.

Spirogyra undergo vegetative, asexual and sexual reproduction. The life cycle of Spirogyra is haplontic, i.e. the dominant stage is free-living haploid (n) gametophyte and the sporophyte is represented only by the diploid zygote (2n)

The entire protoplast of a Spirogyra act as a gamete. They are known as aplanogametes. Aplanogametes are formed in the gametangia, which are formed at the end of the growing season of Spirogyra.

The zygospore remains dormant until favourable conditions are available.

At the time of germination, the zygospore undergoes meiosis to form 4 haploid (n) nucleus, of which only one survives and others disintegrate.

Where does spirogyra live?

Spirogyra are filamentous, free-floating green alga. They are found in freshwater habitats like lakes and ponds. They are commonly called pond silk or water silk. Also, there are approximately 400 species of Spirogyra present worldwide.

How does spirogyra reproduce?

Test your Knowledge on Spirogyra!
Q5