Ohm’s law states the relationship between electric current and potential difference. The current that flows through most conductors is directly proportional to the voltage applied to it. Georg Simon Ohm, a German physicist was the first to verify Ohm’s law experimentally.

One of the most basic and important laws of electric circuits is Ohm’s law.

Ohm’s law states that the voltage across a conductor is directly proportional to the current flowing through it, provided all physical conditions and temperature remain constant.

Mathematically, this current-voltage relationship can be written as,

In the equation, the constant of proportionality, R is Resistance and has units of ohms, with symbol Ω.

The same formula can be rewritten in order to calculate the current and resistance respectively as follows:

Ohm’s law only holds true if the provided temperature and the other physical factors remain constant. In certain components, increasing the current raises the temperature. An example of this is the filament of a light bulb, in which the temperature rises as the current is increased. In this case, Ohm’s law cannot be applied. The lightbulb filament violates Ohm’s Law.

Relationship Between Voltage, Current and Resistance 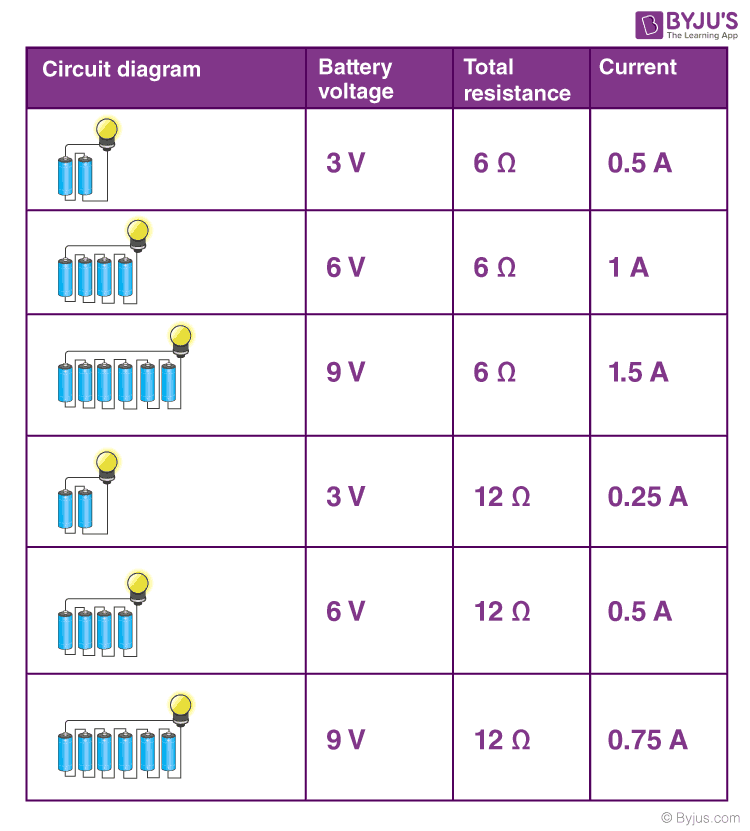 Ohm’s Law describes the current flow through a resistance when different electric potentials (voltage) are applied at each end of the resistance. Since we can’t see electrons, the water-pipe analogy helps us understand the electric circuits better. Water flowing through pipes is a good mechanical system that is analogous to an electrical circuit.

The video below shows the physical demonstration of the Waterpipe analogy and explains to you the factors that affect the flow of current. 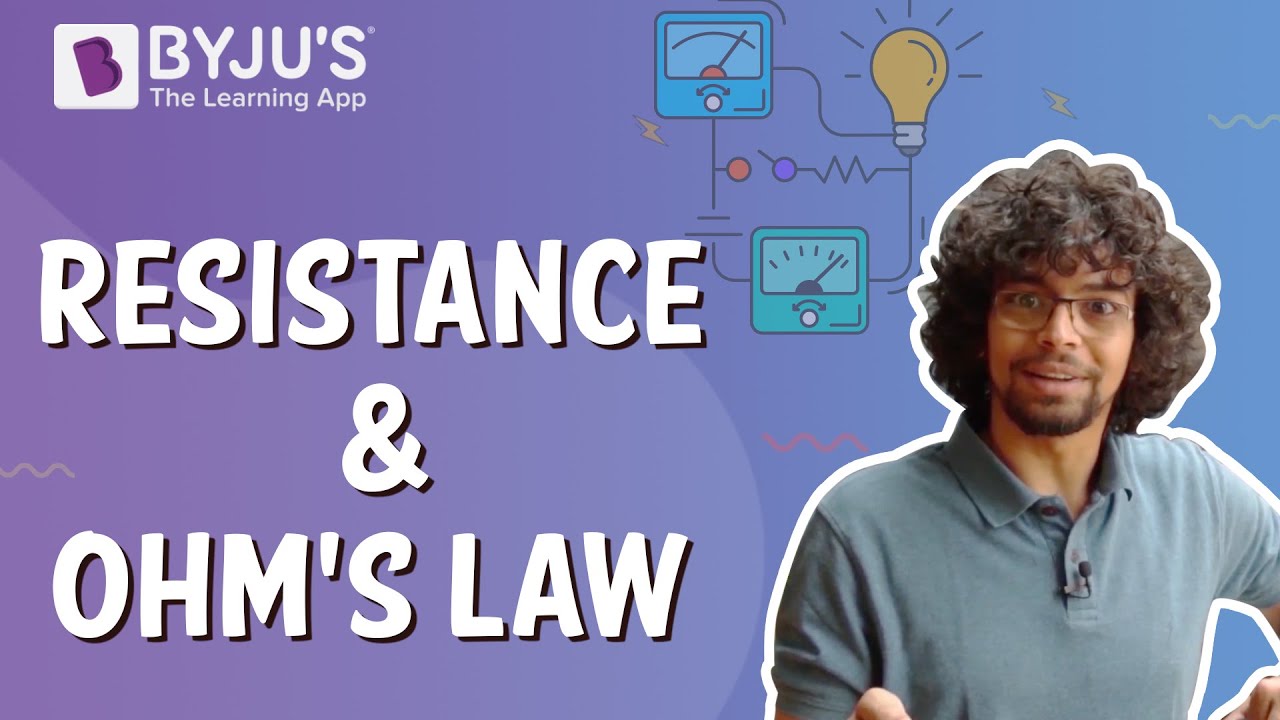 Ohm’s Law can be easily verified by the following experiment:

You can make use of the Ohm’s law magic triangle to remember the different equations for Ohm’s law used to solve for different variables(V, I, R).

If the value of voltage is asked and the values of the current and resistance are given, then to calculate voltage simply cover V at the top. So, we are left with the I and R or I X R. So, the equation for Voltage is Current multiplied by Resistance. Examples of how the magic triangle is employed to determine the voltage using Ohm’s law is given below.

Example 1: If the resistance of an electric iron is 50 Ω and a current of 3.2 A flows through the resistance. Find the voltage between two points.

If we are asked to calculate the value of voltage with the value of current and resistance given to us, then cover V in the triangle. Now, we are left with I and R or more precisely I × R.

Therefore, we use the following formula to calculate the value of V:

When we are asked to find out the value of resistance when the values of voltage and current are given, then we cover R in the triangle. This leaves us with only V and I, more precisely V ÷ I.

The rate at which energy is converted from the electrical energy of the moving charges to some other form of energy like mechanical energy, heat, magnetic fields or energy stored in electric fields, is known as electric power. The unit of power is the watt. The electrical power can be calculated using the Ohm’s law and by substituting the values of voltage, current and resistance.

When the values for voltage and current are given,

When the values for voltage and resistance are given,

When the values for current and resistance are given,

What is a Power Triangle?

When the values of current and voltage are given, the formula for finding power is,

When the values of power and voltage is given, the formula for finding current is,

When the values of power and current is given, the formula for finding voltage is,

To better understand the relationship between various parameters, we can take all the equations used to find the voltage, current, resistance and power, and condense them into a simple Ohm’s Law pie chart as shown below. 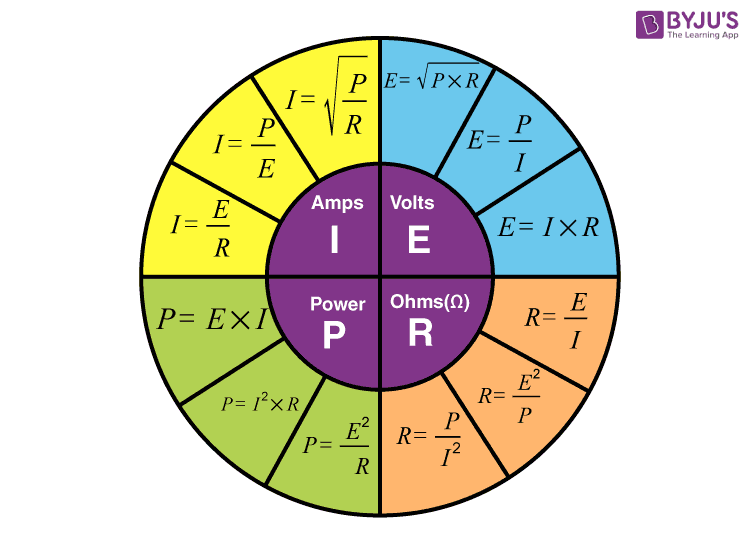 Like Ohm’s Law Pie Chart shown above, we can condense the individual Ohm’s Law equations into a simple matrix table as shown below for easy reference when calculating an unknown value. 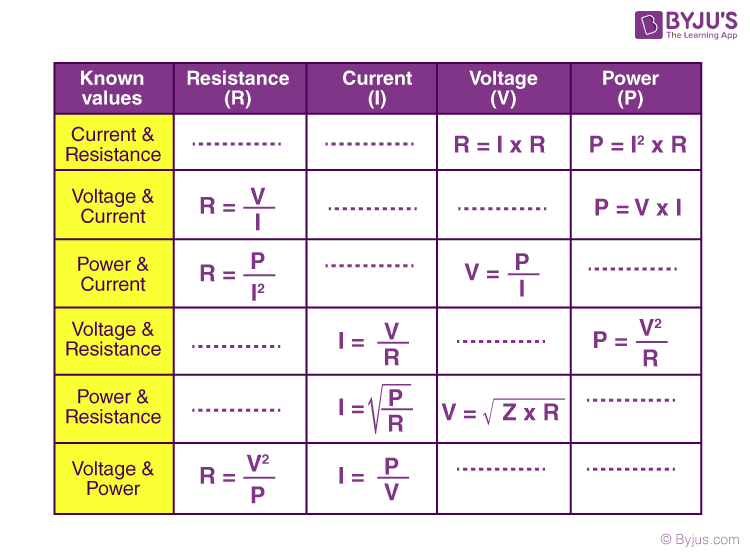 Following are the limitations of Ohm’s law:

What does Ohm’s law state?

What can Ohm’s Law be used for?

Ohm’s law is used to validate the static values of circuit components such as current levels, voltage supplies, and voltage drops.

Why is Ohm’s law not applicable to semiconductors?

Ohm’s law doesn’t apply to semiconducting devices because they are nonlinear devices. This means that the ratio of voltage to current doesn’t remain constant for variations in voltage.

When does Ohm’s law fail?

Ohm’s law fails to explain the behaviour of semiconductors and unilateral devices such as diodes. Ohm’s law may not give the desired results if the physical conditions such as temperature or pressure are not kept constant.