Temperature refers to the hotness or coldness of a body. In specific terms, it is the way of determining the kinetic energy of particles within an object. Faster the movement of particles; more the temperature and vice versa.

Temperature is important in all fields of Science right from Physics to Geology and also it is crucial in most aspects of our daily life. To determine how hot an iron rod is, physicists measure it in temperature to be precise rather than mentioning how hot or cold the rod is.

Temperature is a measure of the average kinetic energy of the particles in an object. When temperature increases, the motion of these particles also increases.

Temperature is measured with a thermometer or a calorimeter. In other words, temperature determines the internal energy within a given system.

Relationship Between Temperature and Kinetic Energy

It is important to understand that heat and temperature are not the same. Although the two concepts are linked they mean different things.
Heat describes the transfer of thermal energy between molecules within a system and it is measured in Joules. An object can gain or lose heat, but it cannot have heat. Heat is not a property possessed by an object or system rather it is a measure of change.
Temperature describes the average kinetic energy of molecules within a material or system and is measured in Celsius (°C), Kelvin(K), Fahrenheit (°F).
Concluding we can say that heat is a transfer of thermal energy caused by a difference in temperature between molecules.

As molecules are minuscule particles, we must use indirect methods to measure the kinetic energy of the molecules of a substance. As heat is added to the substance, the molecules move more rapidly. This increased motion causes a  small increase in the volume, or amount of space, taken up by most materials. There are devices that use the expansion of a substance to give an indirect measure of temperature. Such devices are called thermometers.

How Does a Thermometer Measure Temperature?

What is the Temperature Sensor?

Thermometers measure temperature according to well-defined scales of measurement. The three most common temperature scales are the Fahrenheit, Celsius, and Kelvin scales.

The relationship between three temperature scales is given in the table below:

Solution for 1: To convert from Celsius to Fahrenheit,

we use the equation:

Solution for 2: To convert from Celsius to Kelvin,

we use the equation:

Did you know that thermometers take their own temperature, not the temperature of the object they are measuring?

Thermometers work on the fact that any two systems placed in thermal contact (meaning heat transfer can occur between them) will reach the same temperature. The heat will flow from the hotter object to the cooler object until they reach the same temperature. The objects are then said to be in thermal equilibrium, and no further changes will occur. Systems interact and change because of temperature difference, and these changes stop once their temperatures are the same. Thermal equilibrium is established when two bodies are in contact with each other and can freely exchange energy.

An increase or decrease in temperature causes various changes in the physical and chemical processes of life. Some of those are given below-

Do substance expand or contract as they get hotter?

Substances expand as they get hotter. When heat is added to a body, the molecules and atoms pf the body vibrate faster. As the atoms vibrate faster, the space between atoms increases. The motion and spacing of the particles determine the state of matter of the substance. The end result of increased molecular motion is that the object expands and takes up more space.

Which state of matter has the highest temperature?

Gas has the highest temperature.

Which temperature scale is the most common throughout the world?

Celsius is the most common temperature scale in the world.

What is the coldest temperature possible?

Which temperature scale is most commonly used by scientists?

Kelvin is the most commonly used temperature scale by scientists. 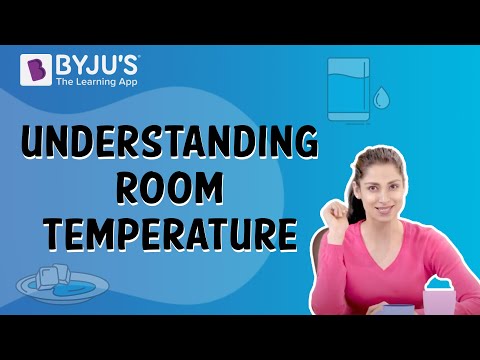 Test your Knowledge on Temperature
Q5