The kinetic theory of gases explains the three macroscopic properties of a gas in terms of the microscopic nature of atoms and molecules making up the gas. Usually, the physical properties of solids and liquids can be described by their size, shape, mass, volume etc. However, when we talk about gases, they have no definite shape, size while mass and volume are not directly measurable. The Kinetic theory of gases is useful and can be applied in this case.

With the help of the kinetic theory of gases, the physical properties of any gas can be defined generally in terms of three measurable macroscopic properties. The pressure, volume and temperature of the container where the gas is stored or present. We will learn about this concept in detail below.

What is Kinetic Theory of Gases?

Kinetic theory of gases is a theoretical model that describes the molecular composition of the gas in terms of a large number of submicroscopic particles which include atoms and molecules. Further, the theory explains that gas pressure arises due to particles colliding with each other and the walls of the container. Kinetic theory of gases also defines properties such as temperature, volume, pressure s well as transport properties such as viscosity and thermal conductivity as well as mass diffusivity. It basically explains all the properties that are related to the microscopic phenomenon.

The significance of the theory is that it helps in developing a correlation between the macroscopic properties and the microscopic phenomenon. In simple terms, the kinetic theory of gases also helps us study the action of the molecules. Generally, the molecules of gases are always in motion and they tend to collide with each other and the walls of the containers. In addition, the model also helps in understanding the related phenomena such as the Brownian motion.

Kinetic theory of gases considers the atoms or molecules of a gas as constantly moving point masses, with huge inter-particle distance and may undergo perfectly elastic collisions. Implications of these assumptions are –

Gas is a collection of a large number of atoms or molecules.

Atoms or molecules making up the gas are very small particles like a point(dot) on a paper with a small mass.

Particles are independent. They do not have any (attractive or repulsive) interactions among them.

The particles are always in constant motion. Because of the lack of interactions and the free space available, the particles randomly move in all directions but in a straight line.

This is the average distance a particle travels to meet another particle.

vii) Kinetic Energy of the Particle

Since the particles are always in motion, they have average kinetic energy proportional to the temperature of the gas.

Moving particles may collide with other particles or containers. But the collisions are perfectly elastic. Collisions do not change the energy or momentum of the particle.

i) Pressure α Amount or Number of Particles at Constant Volume:

At constant temperature and volume, larger the amount (or the number of particles) of the gas higher will be the pressure.

When there is a greater number of particles it increases the collisions and the pressure. If the pressure is to remain constant, the number of collisions can be reduced only by increasing the volume.

At constant pressure, the volume is proportional to the amount of gas.

At constant temperature, the smaller the volume of the container, the larger the pressure.

The kinetic energy of the particle increases with temperature. When the volume is constant, with increased energy, particles move fast and increase the frequency of collisions per unit time on the walls of the container and hence the pressure.

At constant volume, the higher the temperature higher will be the pressure of the gas.

Two gases with molecular weights M1 and M2 will have the same kinetic energy at the same temperature. Then,

The velocity of the molecules are inversely proportional to their molecular weights.

Read more about the different laws by visiting the links given below;

All the gas molecules obey the ideal gas laws only under special conditions of low pressures and high temperatures. The deviations of the real gases, from the ideal gas behaviour, is traced mainly to wrong or incorrect assumptions in the postulates.

The kinetic theory of gas postulates predicted the particles as always in motion and that they have kinetic energy proportional to the temperature of the gas.

This concept was used by Maxwell – Boltzmann, to find the distribution of gaseous particles between energy zero to infinity and calculate the most probable, average and root mean square velocity of the particles. 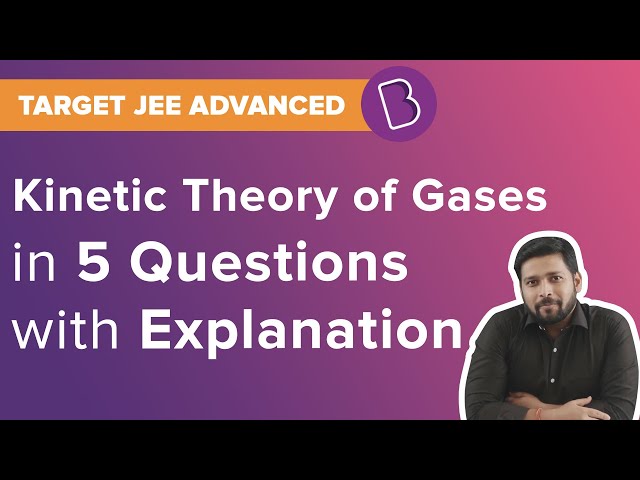 What is the main basis of the kinetic theory?

Kinetic theory explains the behaviour of gases based on the idea that gas consists of rapidly moving atoms or molecules.

What are real gases?

The gases that show deviation from ideal gas features are defined as real gases.

What is mean energy?

K.E of one mole of gas is known as mean energy or the internal energy of the gas and is denoted by U.

What are the three main points of the kinetic model?

The simplest kinetic model is based on the assumptions that:
(1) the gas is composed of a large number of identical molecules moving in random directions, separated by distances that are large compared with their size.
(2) the molecules undergo perfectly elastic collisions (no energy loss) with each other and with the walls of the container, but otherwise do not interact.
(3) the transfer of kinetic energy between molecules is heat.

What do you mean by Degree of Freedom (n)?

Degree of freedom is defined as the number of possible independent ways in which the position and configuration of the system may change.

What is the degree of freedom of the monoatomic gas molecule?

The degree of freedom of monoatomic gas molecule n = 3.

Test your Knowledge on Kinetic theory of gases
Q5