Before we discuss Graham’s law, it is appropriate to know basic definitions of Diffusion and Effusion.

Diffusion is a phenomenon where there is a movement of one material move from area of high concentration to the area of low concentration. This means particles or molecules spread through medium. For example, if you spray at the one end of the room you would be able to smell at the other end. This is because of diffusion phenomenon. 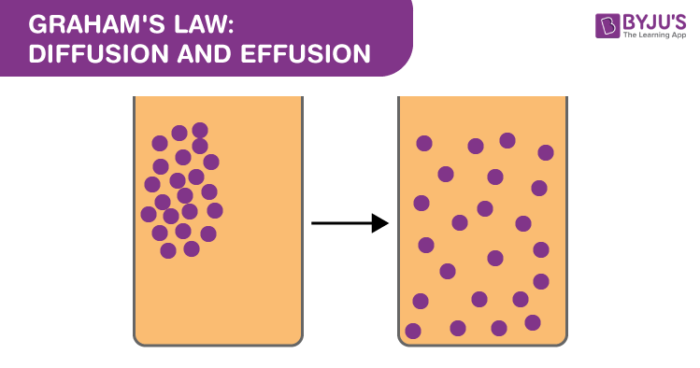 Effusion is a process in which air escapes or leaks through a hole whose diameter is considerably smaller than mean free path of molecules. Under these circumstances, all the molecules which reaches the hole will pass through, as collisions between molecules in these places will be negligible.

According to Graham’s Law, at constant pressure and temperature, molecules or atoms with lower molecular mass will effuse faster than the higher molecular mass molecules or atoms. Thomas even found out the rate at which they escape through diffusion. In other words, it states that rate of effusion of gas is inversely proportional to the square root of its molecular mass. This formula is generally used while comparing the rates of two different gases at equal pressures and temperatures. Formula can be written as

Rate1 is the rate of effusion of the first gas

Rate2 is the rate of effusion for the second gas

It states that rate of diffusion or effusion is inversely proportional to its molecular mass.

Take up a quiz on Graham's Law
Q5