RBSE Class 10 Science Chapter 8 Carbon And Its Compound Solutions help students to get an overview of the topics taught from Chapter 8 of Class 10 Science textbook. Carbon compounds are obtained from living organisms. Chapter 8 of RBSE Class 10 Science, discusses in-depth concepts like Carbon compounds or Organic compounds, characteristics of carbon atoms, classification of hydrocarbons, the nomenclature of organic compounds and more. Mastering these concepts and topics requires practice and hard work. For this reason, we have listed here the compilation of best questions and solutions that can help the students to prepare most efficiently for the board exams. RBSE Class 10 Solutions of Chapter 8 Science, Carbon And Its Compound help the students to know the concepts and learn the subject thoroughly.

5. Which allotrope of carbon is a good conductor of electricity?

6. To improve the quality and tensile strength of natural rubber, it is heated with sulphur. This process is known as______

1.Write the general formula for alkanes, alkenes and alkynes.

2. Hydrocarbons are made up of which two elements?

Answer: The compound Hydrocarbons are made up of the two elements, Hydrogen and carbon.

3. Write the full name of IUPAC.

Answer: The full form of IUPAC is known as the International Union of Pure & Applied Chemistry.

4. Give the definition of vulcanization

Answer: The process of heating the sulphur to improve the quality and the tensile strength of natural rubber is called vulcanization.

5. How many carbon atoms are possible in Fullerene?

6. What type of geometry is present in the Carbon atom?

Answer: Carbon is tetravalent in nature with 4 valencies oriented towards four corners of a regular tetrahedron. Carbon atom is located at the centre of the tetrahedron with the bond angle of 109°28′ between each valency.

7. Write the definition of Freon.

Answer: Freons are the “polychlorofluoroalkanes”. Compounds in which carbon atoms are linked with chlorine and fluorine are known as chlorofluorocarbons (CFC) or Freons.

8. Name the scientist who synthesized the first organic compound.

Answer: The scientist, Friedrich Wohler synthesized the first organic compound urea by heating a mixture of inorganic compounds, ammonium sulphate and potassium cyanate in the laboratory.

9. Write the full form of CNG.

Answer: CNG is the short form of Compressed Natural Gas, which is created by compressing natural gas at high temperature.

10. Give the name of monomers by which orlon is formed by the polymerization process.

11. Name the allotropes of Carbon.

12. Write the IUPAC name of Isobutane.

Answer: An isomer of butane, Isobutane is a chemical compound with the molecular formula HC(CH3)3 and is also known as i-butane, 2-methylpropane or methylpropane.

Answer: Poly Acrylonitrile is the full form of PAN.

14. By polymerization of which monomer, PVC is formed?

16. What do you understand about the catenation tendency of carbon items?

Answer: Carbon atoms possess a special ability which enables them to bond itself, thus forming branched, unbranched or cyclic chains of carbons to carbon bonds. This property of the carbon atom is known as catenation.

17. Write the IUPAC name and structural formula of the following:

(ii) C4H8 is Cyclobutane and the structural formula is 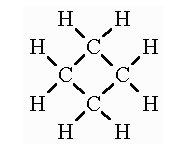 (iii) Cyclopropene is the IUPAC name for C3H4. Structural formula for this is

Answer: Given here are two uses of freons:

(i) Freons are used as inert solvents

(ii) Freons are used as refrigerants or coolants in refrigerator, air conditioner and cold-storages.

Answer: CNG is safer than LPG as it is lighter than LPG. So, when there is a CNG leakage it spreads out in the air, while LPG is heavier so it collects in lower layers, thus increasing the chance of accident. Also, since CNG has less percentage of Carbon, its combustion results in lesser amount of Carbon monoxide or Carbon dioxide. For this reason, CNG is less harmful. Learn more about the differences between CNG and LPG here.

20. Why is diamond hard and graphite soft?

21. Write any four characteristics of fullerene.

Answer: Four features of Fullerene are given:

(i) Fullerene has a structure similar to the football

(iii) The most stable Fullerene, C60 called Buckminister Fullerene contains a total of 32 faces, out of which 20 are hexagonal and 12 pentagonal. It has a football structure, hence known as Buckyball

22. Draw the sketch of classification of hydrocarbons. 23. Write the uses of graphite.

Answer: Given below are the uses of graphite:

Answer: Given here are the main characteristics of Carbon Atom:

1. Atomic Number of Carbon is 6 in the periodic table and is denoted as ‘C”

3. The valency of a carbon atom is 4. Carbon atoms can combine with other atoms to balance its four valencies.

4. Carbon atoms possess a special ability which enables them to bond itself, thus forming branched, unbranched or cyclic chains of carbons to carbon bonds. This property of the carbon atom is known as catenation.

6. Carbon atoms can form a covalent bond with the hydrogen atom by equal sharing of electrons due to almost the same electronegativities for both.

8. Carbon has a high melting point and can easily combine with oxygen at elevated temperatures.

9. The radioactive isotope of carbon is C-14, which is used to date ancient objects of organic origin.

25. Write the IUPAC Names of the following.

Answer: (i) The IUPAC name for Iso-octane is 2,2,4-Trimethylpentane

(ii) 2-methylpropene is the IUPAC name

26. What is plastic? Write names of main plastic polymers.

Answer: Polymer of simple organic molecules that can be moulded into solid objects is called plastic. Examples of plastic include PVC, polythene, orlon, polystyrene and so on.

27. Write the utilities of diamond and fullerene.

Answer: The use of diamond are as follows:

(i) It is used as a glass cutter

(iii) It is used in making phonogram needles

Meanwhile, the uses of fullerene is also given here:

(i) Used in purification of natural gas

(ii) It is used in molecular bearing

(iii) An important allotrope of carbon, it behaves like a super conductor at higher temperature.

28. Explain the nomenclature of Freon.

Answer: The number of carbon, hydrogen and fluorine atoms in the molecular formula of freon are used for the nomenclature of freons as follows:

(iii) Z- Number of fluorine atoms in the freon molecule.

29. What do you mean by synthetic polymers? Write their process of synthesis and uses.

Answer: Polymers that are made in a laboratory or factory are known as synthesized polymers. Some examples are given here:

Nylon-66: Made after condensation of adipic acid (6-carbon) and hexamethylenediamine (6-carbon), this is called nylon-66. It is used for manufacturing gear and bearing in machines, tyre, cloth, fibre, ropes, toothbrush, and so on.

Terylene: Obtained by condensation of ethylene glycol and terephthalic acid, it is also called decron and is used to manufacture cloth, sail, belt, magnetic tape, film and so on.

Rayon:To make rayon, paper (cellulose) is dipped in sodium hydroxide solution and cleaned. After that, it is dissolved in carbon disulphide. This solution is passed through the pores and collected in dilute sulphuric acid. The process gives fine shiny fibres of rayon and is used to manufacture cloth, threads, carpets and so on

Polythene: Ethylene is subjected to polymerization under high temperature in presence of catalyst to obtain polythene. This is flexible and strong plastic. It is used for making bags, bottles, pipe, tube and more.

Poly acrylo nitrile: obtained by polymerization of vinyl cyanide and is used for making sweater, woollike, fibre, pillow, quilt,and so on.

Polystyrene: This is obtained by polymerization of vinyl benzene (styrene) and is used in the manufacture of cups, bottle caps, refrigerator parts, wall tiles, packing materials and more.

30. Write a note on the following:

Answer: (i) Polychloroflouroalkenes are called Freon and they are used as refrigerants. Production of Freon: Carbon tetrachloride reacts with hydrogen fluoride in the presence of antimony pentachloride to give Freon-11.

(ii) When natural gas is compressed it is called Compressed Natural Gas (CNG). CNG present above the oil layer in oil wells is termed as natural gas. CNG has less amount of carbon and so it produces negligible amount of carbon monoxide or carbon dioxide on combustion. For this reason, CNG is more environment-friendly than other petroleum products. It is used as a fuel and also as an alternative to petrol and diesel in the vehicle used for transportation.

(iii) Natural Rubber is obtained from latex which is a sap of a tree. Natural rubber is a polymer isoprene. Acetic acid is added to latex to make it solid. Rubber obtained by this process is highly elastic and has less tensile strength. This is not suitable for making useful products. To make it useful, rubber is heated with sulphur and the process is called vulcanization. Rubber obtained after vulcanization is strong, inelastic and more durable. Learn more about Natural Rubber and its properties here.

31. (a) Write the main rules applied in nomenclature of alkanes.

(b) Write the formula for the following:

Answer: The main rules applied in nomenclature of alkanes are as follows:

(b) (i) Neopentane is also called 2,2-dimethylpropane and has a molecular formula C5H12

(iv) C9H20 is the molecular formula of 3-Ethyl-4-methylhexane.

32. Covalent compounds have low melting and boiling points. Give reason.

Answer: Intermolecular forces between the covalent compounds are small because the covalent bond is created by sharing equal electrons between two atoms. These bonds break easily.

Answer: The uses of methane gas are as follows:

34. Give the reason why carbon creates compounds chiefly by covalent bonding.

35.Carbon forms a large number of compounds. Why?

Answer: Carbon has tetravalency and catenation features that enable it to form a large number of compounds. Carbon has valency 4, hence, to attain noble gas configuration carbon shares its valence electrons with other elements such as hydrogen, chlorine and more. Likewise, Carbon also adapts the self-linking property using which it forms long, branched or cyclic chains of a large number of compounds.

36. Diamond and graphite have different physical properties even if they are made up of carbon and show the same chemical properties. Why? What is this property called?

Answer: The property where diamond and graphite show different physical properties even if they are made up of carbon and have the same chemical properties is allotropy. Because the carbon-carbon bonding in both the cases vary, the physical properties are different. In diamond, one carbon atom bonds with four other carbon atoms of strong covalent bond. This also makes it hard. Meanwhile, in case of graphite, each carbon creates three strong bonds with other three atoms to create a sheet of hexagonal rings. This results in a weak bond between the rings that can slide over each other. Hence, graphite is soft.

After reading through Rajasthan Board 10 Class Science Book, students must attempt the Rajasthan Board Class 10 previous years question papers to understand the RBSE Science paper pattern.

Stay tuned for more updates on Rajasthan Board exam. Download BYJU’S App and subscribe to Youtube channel to watch interactive maths and science videos for your studies.