What are Rubber products?

There are many rubber products which we come across in our daily life. Some common rubber-based objects that we encounter in our day-to-day lives include rubber gloves, rubber bands, and rubber footwear. Rubber items have the ability to recover their shapes after being stretched or distorted, which is the reason why rubber can be classified as an elastomer. Rubber is an elastic substance which can be obtained both naturally (natural rubber) or artificially (they can also be synthesized chemically in laboratories; synthetic rubber-like butyl rubber, neoprene, etc.)

There are two primary types of rubber, namely natural rubber and synthetic rubber.

These are the elastomers which are obtained naturally. Natural rubber is made up of solid particles suspended in a milky white liquid (called latex) that drips from the bark of certain tropical and subtropical trees. This latex rubber is mainly found in countries like Brazil, India, Indonesia, Malaysia, and Sri Lanka. It is made by the polymerization of isoprene (2 methyl-1, 3-butadiene) which has a chemical formula (C5H8) n and it is known as cis- 1, 4- polyisoprene. In simple words, we can say that they are made by loosely joining the monomers of isoprene (C5H8) in the form of a long tangled chain. 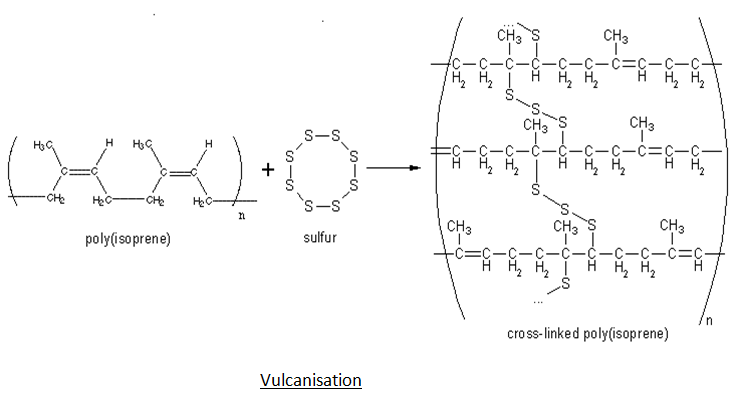 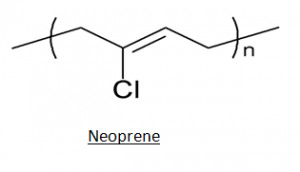 It is a copolymer of 1, 3 – butadiene and acrylonitrile, it is formed in the presence of a peroxide catalyst.

Rubber can be used for various rubber and across various platforms, a few of them are mentioned below;

This article only provides a brief introduction to the preparation of rubber products. To know more about natural rubber products and how they are made, register with BYJU’S and download our app.

1. What is the difference between natural and synthetic rubber?

Natural rubber is polyisoprene in which monomer units are of isoprene i,e 2-methyl-1,3 butadiene. Natural rubber is obtained in the form of solid particles suspended in a milky white liquid (called latex) that drips from the bark of certain tropical and subtropical trees. Neoprene is a synthetic rubber. The monomer of Neoprene is 2-chloro-1,3-butadiene, it is commonly known as chloroprene.

2. What is vulcanisation rubber with an example?

Vulcanization is a chemical process in which the natural rubber is heated with sulphur, accelerator and activator at 373-415 K. Vulcanised rubber is better than natural rubber in the sense that it is more elastic, has less Water absorbing tendency and is more resistant to oxidation and towards organic solvent.

3. What is natural rubber used for?

Natural rubber is made up of solid particles suspended in a milky white liquid (called latex) that drips from the bark of certain tropical and subtropical trees. It is used in medical devices, surgical gloves, aircraft and car tires, pacifiers, clothes, toys, etc.

4. What are the disadvantages of natural rubber?

The disadvantages of natural rubbers are quite less resistant to attack by organic acid. It has little durability. When stretched to a greater extent, it suffers permanent deformation.

5. What are synthetic rubber examples?

Test Your Knowledge On Natural Rubber And Properties!
Q5