Telangana Board Class 10 General Science Part II 2018 Question Paper Solutions sets the foundation for all the important questions regularly asked in the General Science Part II Biological Science exams. Students can download the PDF formats of the solved or unsolved question paper, as preferred, by just clicking on the listed links in the article. For the students’ convenience, we have also compiled below the interactive PDF links from where they can get the printable format of the question papers. We have also mentioned the questions and answers on the web-page.

The students who have cracked the entire complex topics of Biological Sciences will find it easy to ace the board exams. They also get familiar with the question types that are often found in the exam with these question paper solutions. Students are advised to practise hard by solving the previous papers of Telangana Board Class 10 before the exams to gauge their performance and their preparation level for the board exams. Referring to these solutions beforehand will also help them identify their mistakes and take steps to avoid these for the board exams. Solving these paper solutions is the best way for these students to get an overview of the question paper design and the marks’ allotment per section. These question paper solutions will also help them to determine the difficulty level of the exams. 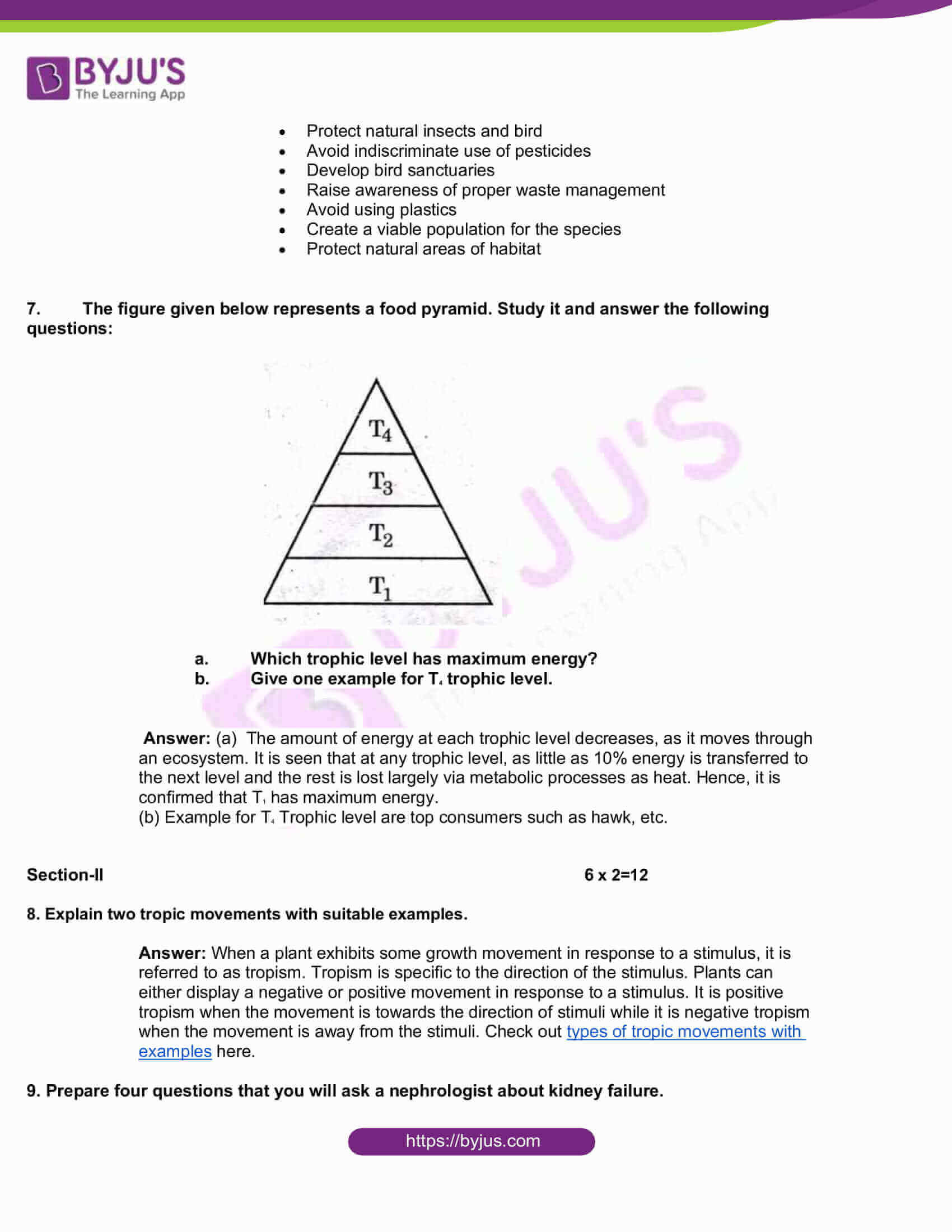 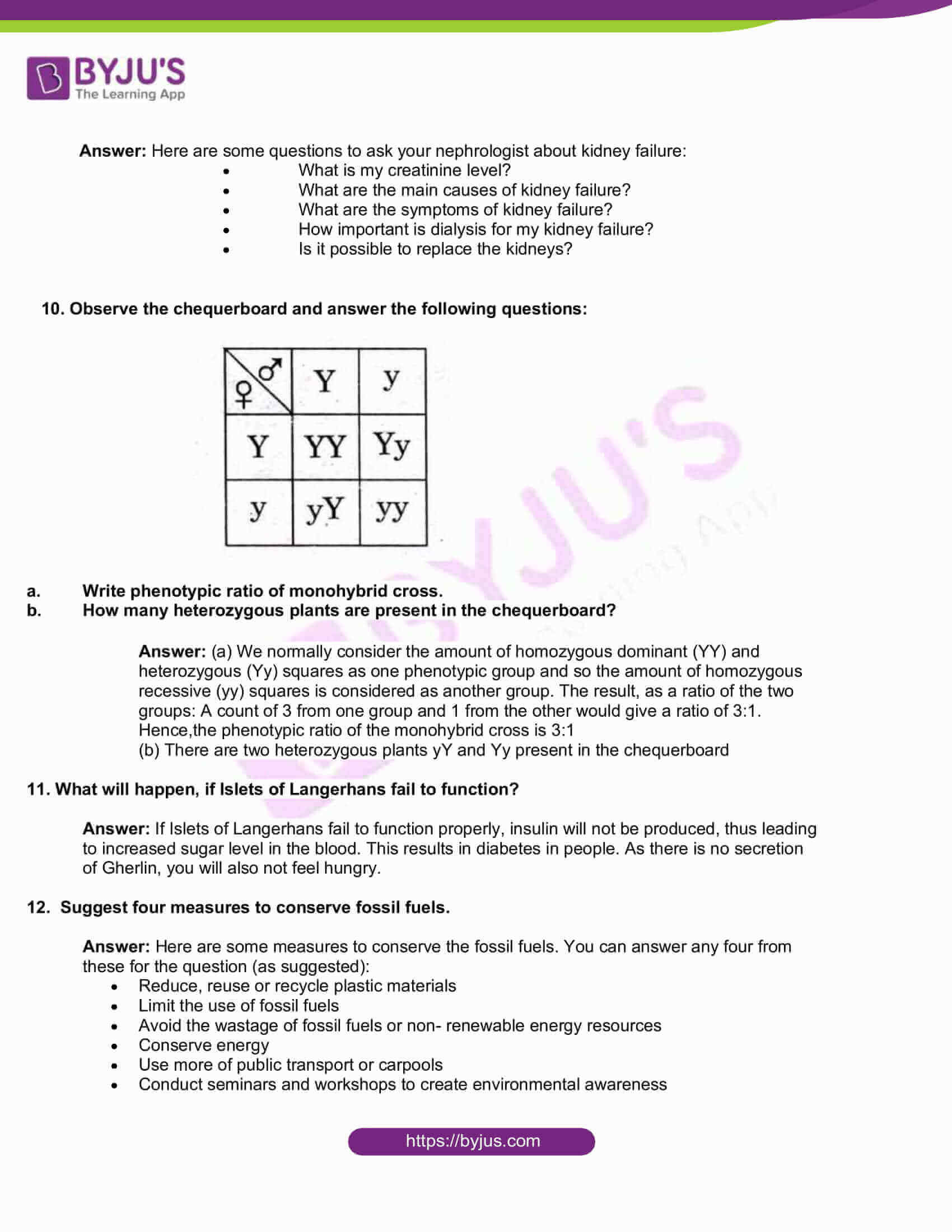 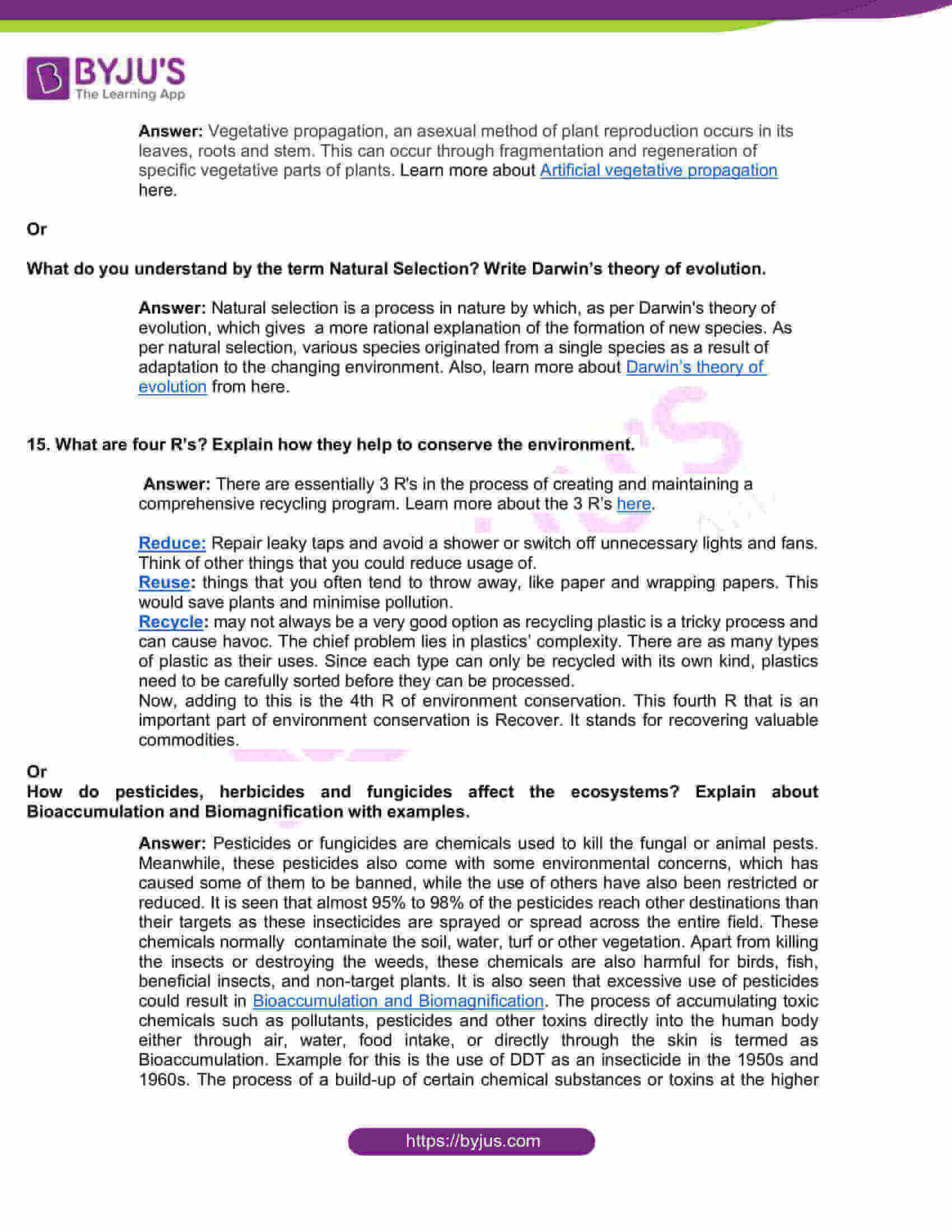 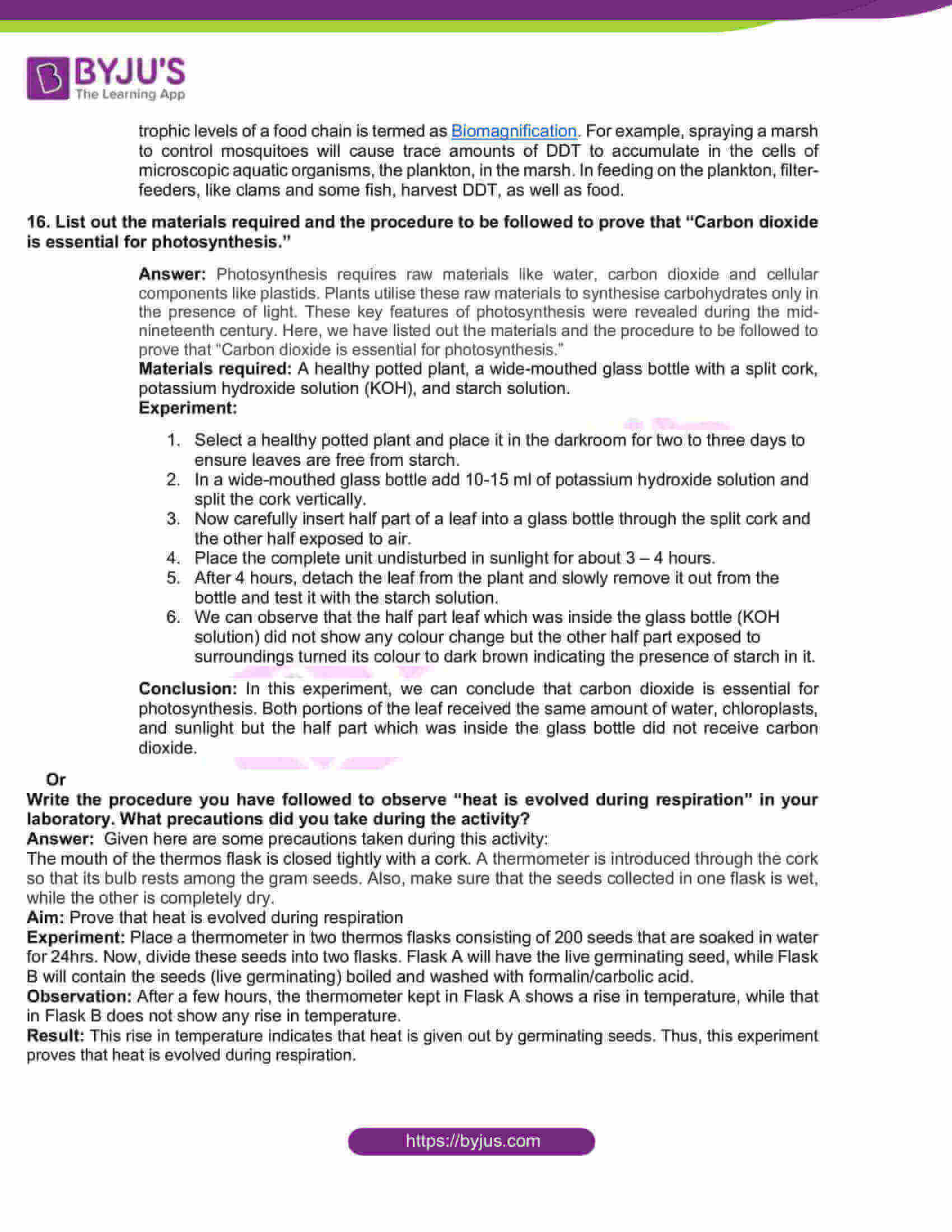 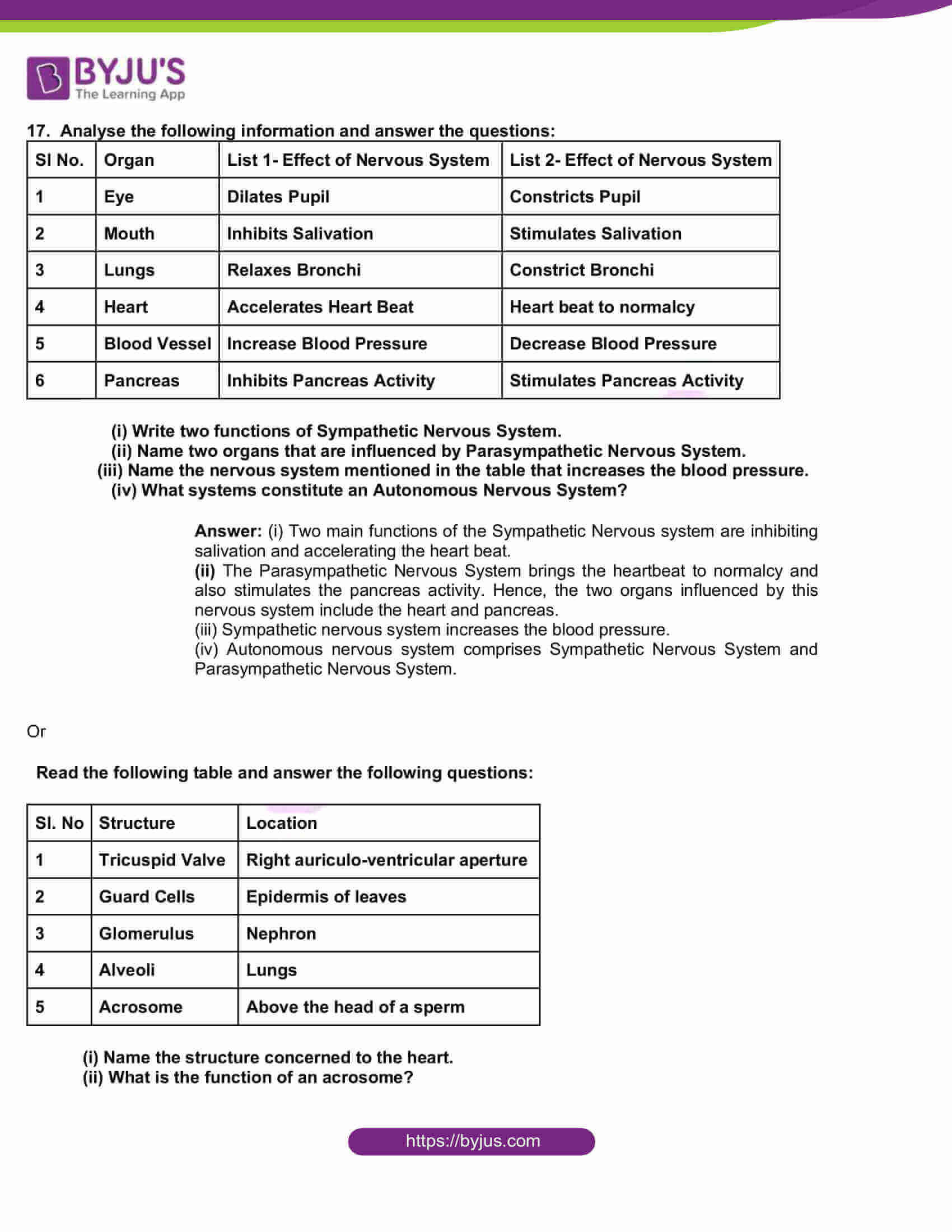 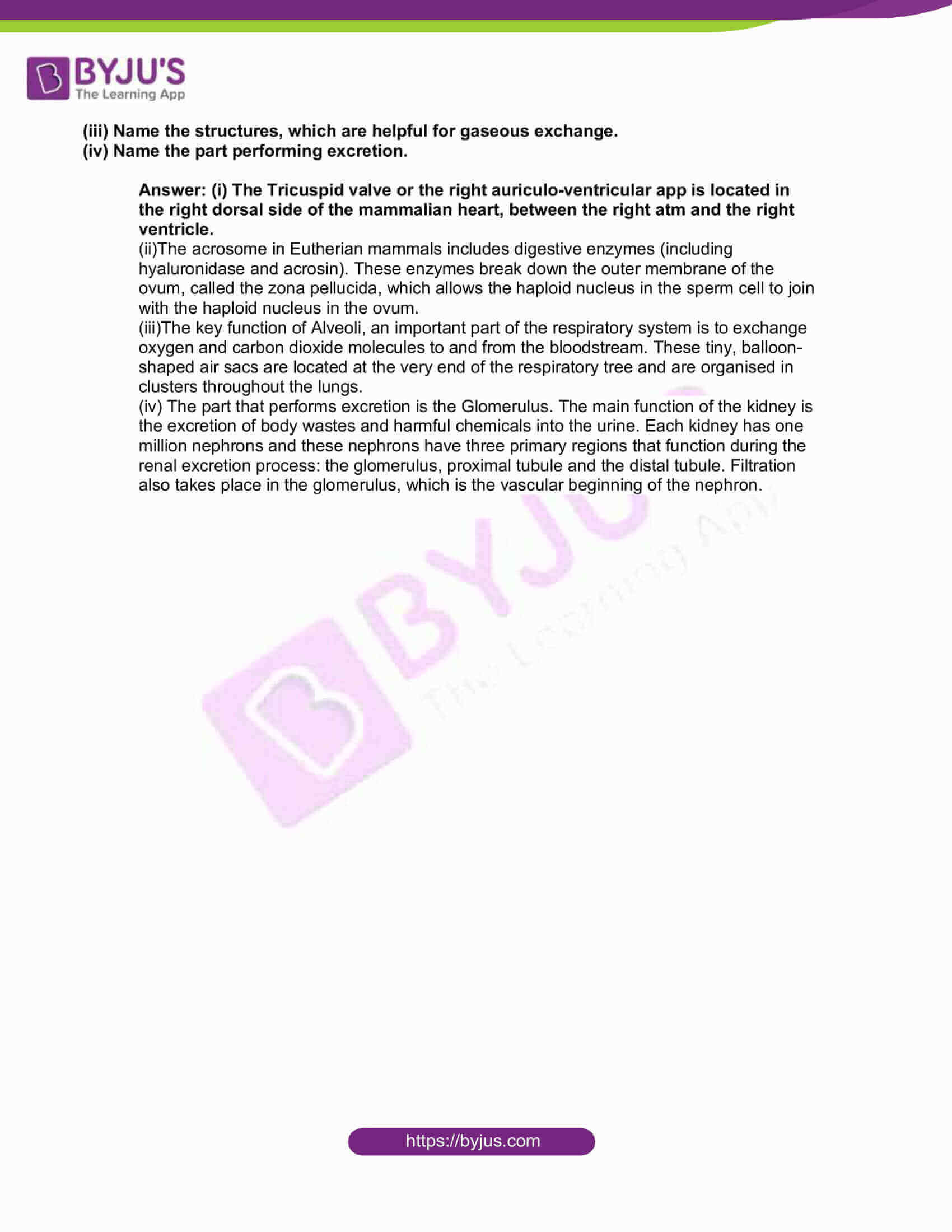 Answer: Photosynthesis is the basic energy source for the living world because it releases oxygen, which is very important for all living beings. This is how the green plants and blue-green algae utilise the energy of light to convert carbon dioxide and water into the simple sugar glucose. It is crucial for auto-tropic nutrition and is considered a significant part of the food chain. Also, in the absence of Photosynthesis, the carbon cycle will not take place.

Answer: The trypsin found in the pancreas will break down the protein-rich food items, thus digesting the proteins into peptides and amino acids. These end products are in active form trypsinogen. Thus, we find that the food material on which trypsin acts is protein, and the end products released are proteose and peptone. .

Answer: Materials that you need to observe the goat heart in your laboratory are the heart of a goat from the butcher, dissecting scissors, scalpels, soda straws, tray, forceps, used pen refills, a jug of water and so on.

Answer: Creating awareness campaigns is the best solution to stop female foeticide. One way to create awareness to stop female foeticide is to educate people about the importance of females. We can also conduct street plays in cities with a low female ratio. Meanwhile, Beti Bachao, Beti Padhao (means save girl child and educate girl child) scheme launched in 2015, also works for women’s welfare.

Answer: Since mould is an allergen and can be toxic, it is better to cover as much skin as you can and wear gloves when handling it. You can use a toothpick to scrape it off. If you do touch the mould with your bare hands, make sure to wash it off properly. If you have any allergies like asthma, it is better to stay away from it.

Answer: Here are some methods suggested, to conserve insects and birds: Answer: (a) The amount of energy at each trophic level decreases, as it moves through an ecosystem. It is seen that at any trophic level, as little as 10% energy is transferred to the next level and the rest is lost largely via metabolic processes as heat. Hence, it is confirmed that T1 has maximum energy.

(b) Example for T4 Trophic level are top consumers such as hawk, etc.

9. Prepare four questions that you will ask a nephrologist about kidney failure.

Answer: Here are some questions to ask your nephrologist about kidney failure:

10. Observe the chequerboard and answer the following questions: 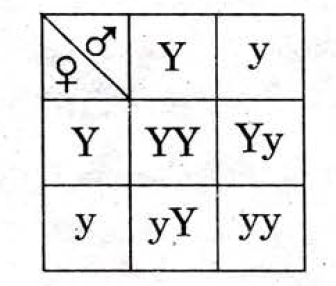 Answer: (a) We normally consider the amount of homozygous dominant (YY) and heterozygous (Yy) squares as one phenotypic group and so the amount of homozygous recessive (yy) squares is considered as another group. The result, as a ratio of the two groups: A count of 3 from one group and 1 from the other would give a ratio of 3:1. Hence,the phenotypic ratio of the monohybrid cross is 3:1

11. What will happen, if Islets of Langerhans fail to function?

Answer: If Islets of Langerhans fail to function properly, insulin will not be produced, thus leading to increased sugar level in the blood. This results in diabetes in people. As there is no secretion of Gherlin, you will also not feel hungry.

Answer: Here are some measures to conserve the fossil fuels. You can answer any four from these for the question (as suggested):

13. Observe the diagram and answer the following questions: 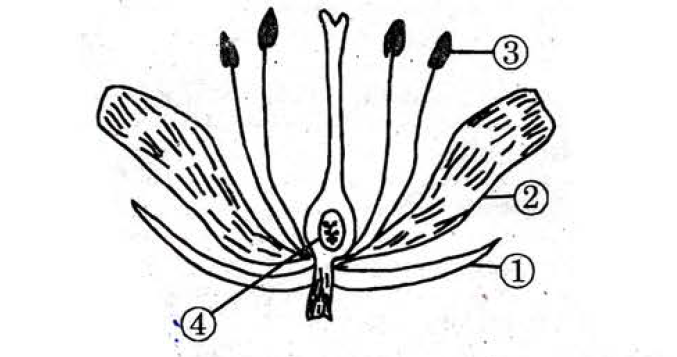 14. Explain the vegetative methods of artificial propagation in plants.

What do you understand by the term Natural Selection? Write Darwin’s theory of evolution.

15. What are four R’s? Explain how they help to conserve the environment.

Answer: There are essentially 3 R’s in the process of creating and maintaining a comprehensive recycling program. Learn more about the 3 R’s here.

Reduce: Repair leaky taps and avoid a shower or switch off unnecessary lights and fans. Think of other things that you could reduce usage of.

Reuse: things that you often tend to throw away, like paper and wrapping papers. This would save plants and minimise pollution.

Recycle: may not always be a very good option as recycling plastic is a tricky process and can cause havoc. The chief problem lies in plastics’ complexity. There are as many types of plastic as their uses. Since each type can only be recycled with its own kind, plastics need to be carefully sorted before they can be processed.

How do pesticides, herbicides and fungicides affect the ecosystems? Explain about Bioaccumulation and Biomagnification with examples.

Answer: Pesticides or fungicides are chemicals used to kill the fungal or animal pests. Meanwhile, these pesticides also come with some environmental concerns, which has caused some of them to be banned, while the use of others have also been restricted or reduced. It is seen that almost 95% to 98% of the pesticides reach other destinations than their targets as these insecticides are sprayed or spread across the entire field. These chemicals normally contaminate the soil, water, turf or other vegetation. Apart from killing the insects or destroying the weeds, these chemicals are also harmful for birds, fish, beneficial insects, and non-target plants. It is also seen that excessive use of pesticides could result in Bioaccumulation and Biomagnification. The process of accumulating toxic chemicals such as pollutants, pesticides and other toxins directly into the human body either through air, water, food intake, or directly through the skin is termed as Bioaccumulation. Example for this is the use of DDT as an insecticide in the 1950s and 1960s. The process of a build-up of certain chemical substances or toxins at the higher trophic levels of a food chain is termed as Biomagnification. For example, spraying a marsh to control mosquitoes will cause trace amounts of DDT to accumulate in the cells of microscopic aquatic organisms, the plankton, in the marsh. In feeding on the plankton, filter-feeders, like clams and some fish, harvest DDT, as well as food.

16. List out the materials required and the procedure to be followed to prove that “Carbon dioxide is essential for photosynthesis.”

Conclusion: In this experiment, we can conclude that carbon dioxide is essential for photosynthesis. Both portions of the leaf received the same amount of water, chloroplasts, and sunlight but the half part which was inside the glass bottle did not receive carbon dioxide.

Write the procedure you have followed to observe “heat is evolved during respiration” in your laboratory. What precautions did you take during the activity?

Answer: Given here are some precautions taken during this activity:

The mouth of the thermos flask is closed tightly with a cork. A thermometer is introduced through the cork so that its bulb rests among the gram seeds. Also, make sure that the seeds collected in one flask is wet, while the other is completely dry.

Aim: Prove that heat is evolved during respiration

Experiment: Place a thermometer in two thermos flasks consisting of 200 seeds that are soaked in water for 24hrs. Now, divide these seeds into two flasks. Flask A will have the live germinating seed, while Flask B will contain the seeds (live germinating) boiled and washed with formalin/carbolic acid.

Result: This rise in temperature indicates that heat is given out by germinating seeds. Thus, this experiment proves that heat is evolved during respiration.

17. Analyse the following information and answer the questions:

(iii) Name the nervous system mentioned in the table that increases the blood pressure.

Answer: (i) Two main functions of the Sympathetic Nervous system are inhibiting salivation and accelerating the heart beat.

(ii) The Parasympathetic Nervous System brings the heartbeat to normalcy and also stimulates the pancreas activity. Hence, the two organs influenced by this nervous system include the heart and pancreas.

(i) Name the structure concerned to the heart.

(ii) What is the function of an acrosome?

(iii) Name the structures, which are helpful for gaseous exchange.

Answer: (i) The Tricuspid valve or the right auriculo-ventricular app is located in the right dorsal side of the mammalian heart, between the right atm and the right ventricle.

(iii)The key function of Alveoli, an important part of the respiratory system is to exchange oxygen and carbon dioxide molecules to and from the bloodstream. These tiny, balloon-shaped air sacs are located at the very end of the respiratory tree and are organised in clusters throughout the lungs.

(iv) The part that performs excretion is the Glomerulus. The main function of the kidney is the excretion of body wastes and harmful chemicals into the urine. Each kidney has one million nephrons and these nephrons have three primary regions that function during the renal excretion process: the glomerulus, proximal tubule and the distal tubule. Filtration also takes place in the glomerulus, which is the vascular beginning of the nephron.