Let us have a detailed look at the plant kingdom notes provided here for the conceptual understanding of the topic.

Kingdom Plantae includes all the plants. They are eukaryotic, multicellular and autotrophic organisms. The plant cell contains a rigid cell wall. Plants have chloroplast and chlorophyll pigment, which is required for photosynthesis.

The plant kingdom has the following characteristic features: 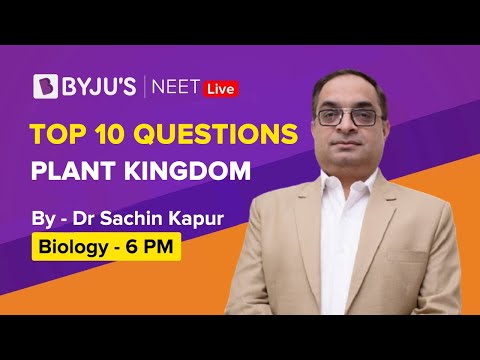 A plant kingdom is further classified into subgroups. Classification is based on the following criteria:

The plant kingdom has been classified into five subgroups according to the above-mentioned criteria:

Thallophytes lack a well-differentiated body structure and the plant body is thallus like.

Thallophytes: Primitive plants where the body is not differentiated into stem, roots and leaves

Bryophytes do not have vascular tissues. The plant body has root-like, stem-like and leaf-like structures. Bryophytes are terrestrial plants but are known as “amphibians of the plant kingdom” as they require water for sexual reproduction. They are present in moist and shady places. Bryophyta includes mosses, hornworts and liverworts. Some of the common examples are Marchantia, Funaria, Sphagnum, Antheoceros, etc.

Pteridophytes have a well-differentiated plant body into root, stem and leaves. They have a vascular system for the conduction of water and other substances. Some of the common examples are Selaginella, Equisetum, Pteris, etc.

Gymnosperms have a well-differentiated plant body and vascular tissues. They bear naked seeds, i.e. seeds are not enclosed within a fruit. Some of the common examples of gymnosperms are Cycas, Pinus, Ephedra, etc.

Angiosperms: Vascular plants that possess special characteristics such as  flowers and fruits

Angiosperms are seed-bearing vascular plants with a well-differentiated plant body. The seeds of angiosperms are enclosed within the fruits. Angiosperms are widely distributed and vary greatly in size, e.g. Wolffia is small measuring about 0.1 cm and Eucalyptus trees are around 100 m tall. Angiosperms are further divided into monocotyledons and dicotyledons according to the number of cotyledons present in the seeds. Some of the common examples are mango, rose, tomato, onion, wheat, maize, etc.

The plant kingdom is also classified into two groups:

Name the pigment responsible for photosynthesis in plants.

Chlorophyll is the pigment responsible for photosynthesis in plants.

Describe the criteria for levels of classification in plants.

The plant kingdom is further classified based on the following three criteria:

Explain the characteristic of Thallophytes.

Members of this class lack a well-differentiated body structure, or in other words, the body is not clearly divided into stem, leaves and roots.

Explain the significant features of Gymnosperms.

Gymnosperms include plants that possess a vascular system and a well-differentiated body structure. Furthermore, they bear seeds like the angiosperms, but they are not encased within a fruit. Hence, the term “Gymnosperm”, which is derived from Greek word, gymno = naked and Sperma = seed.

Register at BYJU’S for more plant kingdom notes for reference.