Bryophyta, the division of green plants, refers to embryophytes which in literal terms, are land plants, especially the non-vascular ones. This division includes-

Bryophytes are believed to evolve from charophytes and are considered to have been the first true plants to have ever evolved. 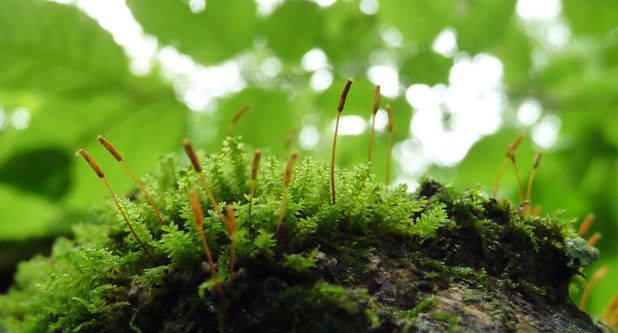 As stated before, the defining feature of bryophytes is that they are non-vascular plants. Other important bryophytes characteristics are as follows:

The life cycle of Bryophytes is like all the other land plants (embryophytes) with alternation of generations. A haploid gametophyte cell contains a fixed number of unpaired chromosomes. It gives rise to diploid sporophyte, which, however, contains twice the number of paired chromosomes. Diploid zygotes formed by the fusion of haploid sperm and eggs produced by gametophytes. Diploid zygotes grow into a sporophyte.

Sporophyte Characteristics of the three groups of Bryophytes

Bryophytes are an informal division that consists of 3 groups of non-vascular plants, namely mosses, liverworts, and hornworts.  Prominent bryophytes characteristics are the absence of true roots stems and leaves. Furthermore, rhizoids perform the function of roots, essentially anchoring the plants into the surface. Though, rhizoids do not absorb nutrients like traditional plant roots.

An environment that is high in moisture or proximity to a waterbody is very essential for mosses to grow and spread. However, some species of mosses are also known to survive in arid and semi-arid environments like deserts. In such cases, they can entirely dry out and enter a state of suspended animation. When they come in contact with water again, they revive and continue growing. For more information on bryophyta or any other related topic, explore BYJU’S Biology.