Serine is a non-essential amino acid that is used in the biosynthesis of proteins. They are derived from an amino acid glycine. They are obtained by the hydrolysis. They do not require literary resources and can be synthesized from glucose.

L-isomer is the only form of serine that is involved in the synthesis of proteins in humans. It is one among the twenty amino acids that are required for the normal functioning of the body. Since it is a non-essential amino acid, it can be synthesized by a human body from several compounds through various chemical reactions. Serine forms an integral part of the class of phospholipids that are found in the biological membrane. Example: Ethanolamine. 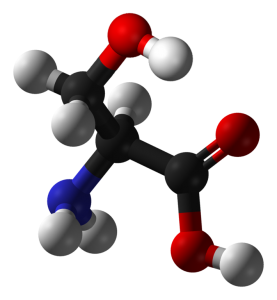 R = Side Chain that is specific to each amino acid.

These two optical isomers of amino acids, and they are termed L and D. They represent the huge majority of amino acids that sunders in most of the amino acids. They actively participate in the protein synthesis. The synthesis of mammalian proteins involves only the L-Stereoisomers. 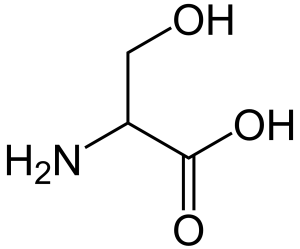 Serine plays an important role in the synthesis of many biological vital compounds namely glycine, cystine, purines, pyrimidines, phosphides, proteins and much more. It plays a crucial role in metabolism. Serine protease that is found in the digestive system break down the proteins that are helping an enzyme catalyze in its reaction.

A serine protease is an enzyme that sunders peptide bonds in proteins. They are found in prokaryotes and eukaryotes. Serine’s side chain as a residue of proteins can undergo O-linked glycosylation. The residues of phosphorylated serine are referred as phosphoserine. L- serine tastes sour at a very high concentration. D-Serine consists of musty aroma, and it is an off – white crystalline powder.

Take up a quiz on Serine
Q5