Proteins are known as the building blocks of life because they are the most abundant molecules present in the body and form about 60% of the dry weight of cells. 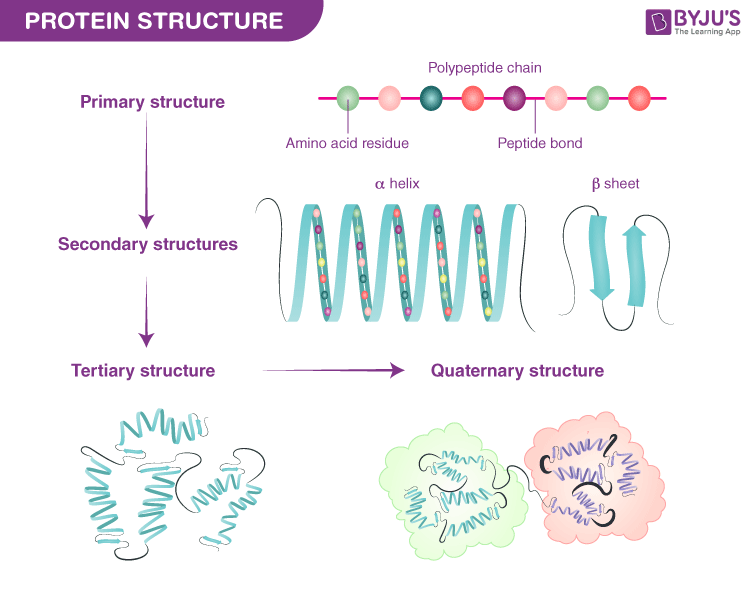 Food like eggs, pulses, milk and other milk products form the major high-protein foods for the body.

A polymeric chain of amino acid residues constitutes proteins. A protein’s structure is primarily made up of long chains of amino acids. The arrangement and placement of amino acids give proteins certain characteristics. All amino acid molecules contain an amino (-NH2) and a carboxyl (-COOH) functional group. Hence, the name “Amino-Acid”.

Polypeptide chains are synthesized by linking together amino acids. A protein is created when one or more of these chains fold in a specific way. Methane is substituted by amino acids, with hydrogen, amino groups, carboxyl groups, and a variable R- group filling the first three valencies of the – alpha carbon.
There are many sorts of amino acids depending on the R-group, and a polypeptide chain contains 20 of them. The final structure and purpose of proteins are determined by all these characteristics of amino acids.

The structure of the protein is classified at 4 levels:-

The body uses proteins for a variety of purposes, and their structure determines how they work. Several notable functions include:

Learn more about Proteins, their types, sources, importance and other related topics at BYJU’S Biology

Test your knowledge on Proteins Structure And Functions
Q5