Geography is an important part of the UPSC syllabus. In this article, you can read all about the distribution of oceans and continents on planet earth, continental drift theory, and other theories. This is an important topic for the UPSC exam.

The continents cover about 29% of the total surface area of the earth and the rest, 79%, is covered by oceans. It is a well-accepted fact that the positions of the continents and the oceans have not been the same in the past and they will not continue to have their present positions in times to come.

In 1912, Alfred Wegener, a German meteorologist put forth a comprehensive argument in the form of  “The Continental Drift Theory” regarding the distribution of the oceans and the continents. The continental drift theory is supported by the following evidence –

Force for Drifting of Continents

According to Wegener, two forces are responsible for the drifting of the continents –

However, many scholars considered the above forces to be inadequate.

In 1967, McKenzie and Parker, and Morgan independently formulated a theory called “plate tectonics”. The earth’s surface is composed of rigid lithospheric slabs (both continental and oceanic) technically called “plates”. These lithospheric plates are also called crustal plates or tectonic plates. The word “tectonic” is derived from the Greek word ‘tekton’ meaning builders. These plates move horizontally over the asthenosphere as rigid units. A plate may be called the continental plate or oceanic plate depending on which of the two occupy a larger portion of the plate. For example, the Eurasian plate is called a continental plate and the Pacific plate is largely an oceanic plate.

Some important minor plates are – 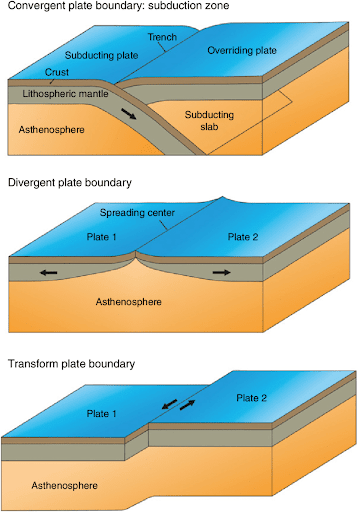